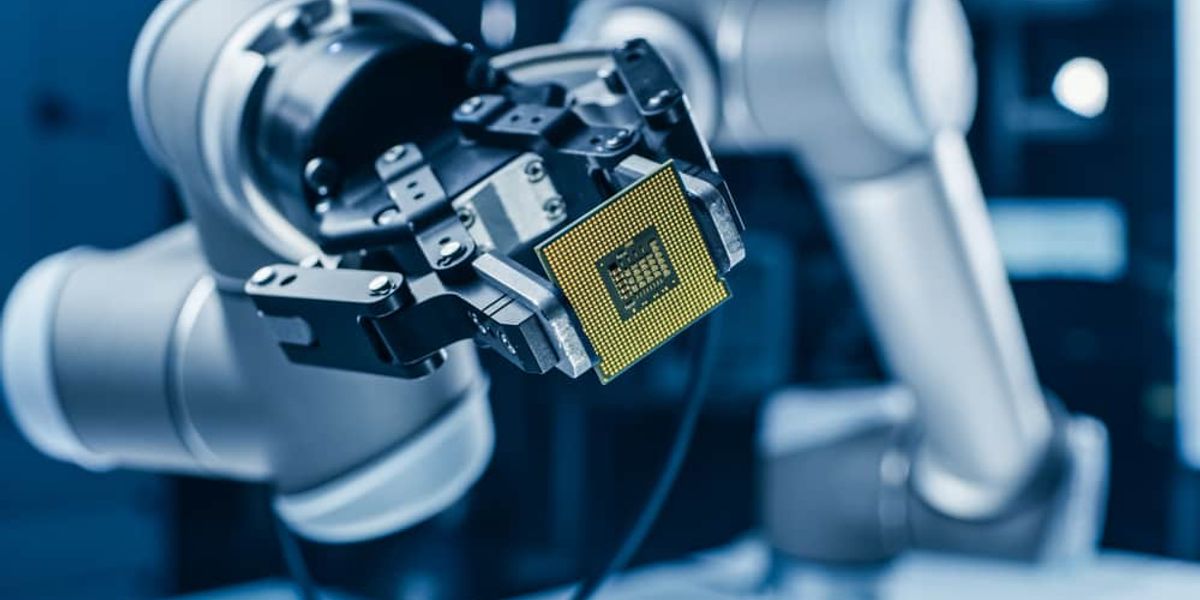 Manipulator robots can be found anywhere from automotive factories to hospitals. Used to grab and move items of various sizes, manipulators comprise a multi-jointed arm and an end effector.

Robots are regularly used to move an object from one place to another. This might be moving a heavy extrusion from one area of a factory floor to another, or it might be delicately performing surgery on a human eye.

A manipulator robot or robotic manipulator is a critical device in tasks like these. Used to manipulate materials and objects without direct human touch, manipulators can be faster and more accurate than human operators, and can sometimes lift much heavier weights. Because of these important advantages, manipulators have a wide variety of types and applications.

This article explains the basics of manipulator robots: what they are, how they work, their different variants, and some of their most useful applications in the real world.

In the field of robotics, manipulators are electronic devices designed to interact with their environment by moving objects from one place to another.

Manipulators can generally be considered synonymous with robotic arms; “manipulation” describes the task these devices perform, while “robotic arm” describes their structure, which can (though not always) resemble a human arm. A robotic arm contains different segments that interact with one another via slides or joints, giving the arm multiple degrees of freedom (DoF). At the extreme end of the arm (the hand, as it is sometimes known) is an end effector such as a gripper, which is responsible for the direct manipulation of the object.

Manipulators can be automated — as is the case with many factory floor tasks — or controlled by an operator, such as during keyhole surgery in a hospital or for lift-assist purposes in a warehouse. Recognizable robotic arms such as those made by Kuka and ABB can be considered types of manipulators.

Because manipulators consist of several sections, each capable of moving in a different way, complex algorithms are used to control the overall motion of the arm.

Before we begin to look at the application of manipulators, we will classify them by their mode of kinematic operation.

Robotic manipulator arms typically have between three and six degrees of freedom, afforded by a series of joints (analogous to a shoulder, elbow, or wrist) which connect the various links of the device (analogous to an upper arm, forearm, or palm). The joints of a manipulator are usually either revolute joints or prismatic joints.[1]

The type of arm determines its number of degrees of freedom, as well as its workspace (how far it can reach). 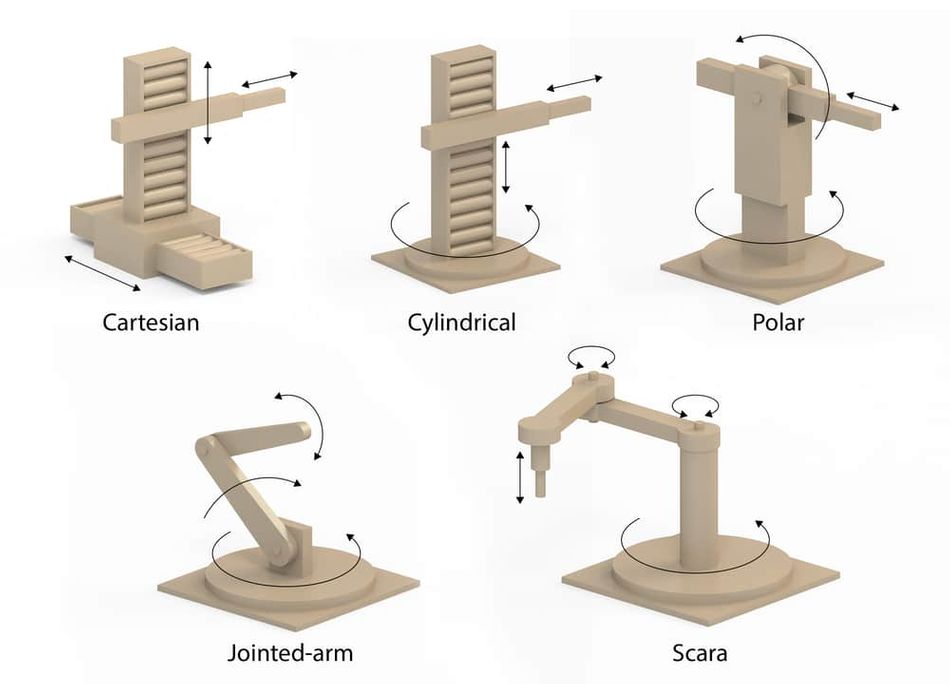 Articulated robots with jointed arms offer the most possible degrees of freedom and typically have between three and six revolute joints. The biggest advantage of a jointed-arm robot is its wide range of movement; however, it can be less accurate than other types. Common uses include arc welding and spraypainting.

Selective Compliance Assembly Robot Arm (SCARA) manipulators have one prismatic joint for Z-axis movement and two parallel revolute joints. SCARA robots are widely used in assembly. They can often lift heavier payloads than other types of robot as the two revolute joints do no lifting.

Cartesian or gantry manipulators can move along three axes via a system of rails, like the printhead of a fused deposition modeling (FDM) 3D printer. They are very easy to program and can lift heavy payloads. Common uses include pick-and-place and sealant application.

Spherical or polar robot manipulators have two revolute joints, including one at the base, with a third prismatic joint to allow for extension of the arm. These manipulators require less complex algorithms and are useful for welding and pick and place operations.

Cylindrical robot manipulators have a revolute joint at the base and two prismatic joints: one for z-axis movement and one for movement along the horizontal plane. This robotic system is rigid and accurate but is less common than other types.

Delta robots are typically attached to the ceiling of the work area and have three or six arms each with its own revolute or prismatic joint. Rigid and fast-operating, delta robot manipulators are used for tasks like pick and place, assembly, and sealant application.

We can also classify manipulators by their end effectors, the tools at the end of the arms that ultimately determine what kind of operation the manipulator can perform. Manipulator end effectors are typically some form of gripper, with the number and material of the “fingers” dependent on the device’s end use. 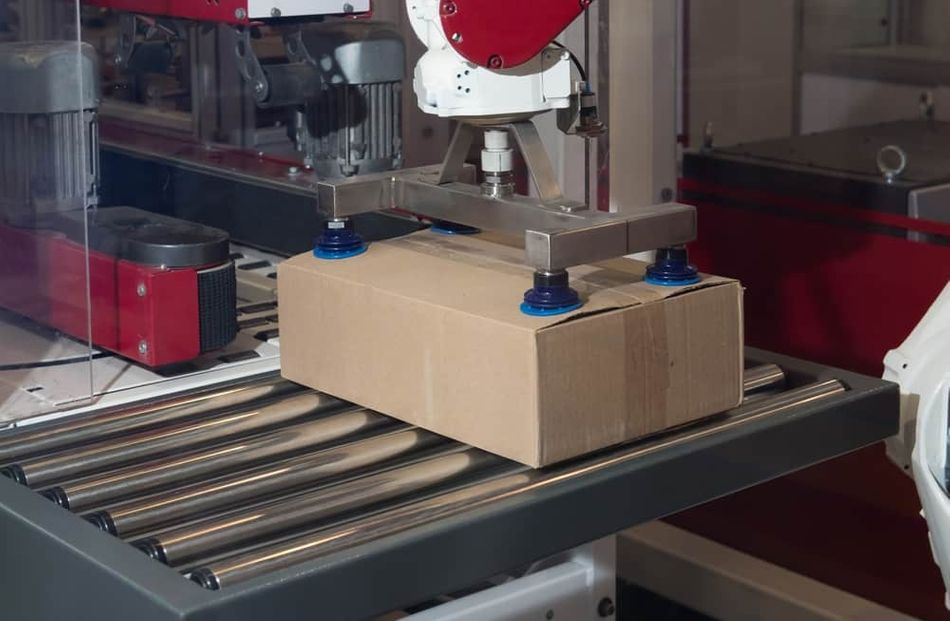 Electric grippers have fingers powered by individual motors, allowing for a firm grasp of the objects being manipulated and a high level of control over speed and placement.

Pneumatic grippers used compressed air for movement rather than an electrical system, providing a greater level of gripping force than electric grippers.

Magnetic grippers are used to handle ferrous materials. The magnetism minimizes risk of droppage and does not require electricity or air.

Mechanical grippers are not powered but feature prongs or other design features that allow them to connect with the objects being manipulated.

Suction cup grippers use a vacuum to pick up and manipulate objects. They are a useful low-cost option but have a more limited use than other end effector types.

Manipulator robots are most commonly found in factories for industrial work. In this context, their uses are many and varied. However, manipulators can also be found outside of manufacturing, in areas like healthcare.

Robot manipulators are widely used in industrial settings due to their accuracy, repeatability, capacity for automation, ability to lift heavy payloads, and versatility in terms of the different end effectors that can be used. Such industrial robots are sometimes called serial manipulators.

Industrial uses for robotic manipulators include: 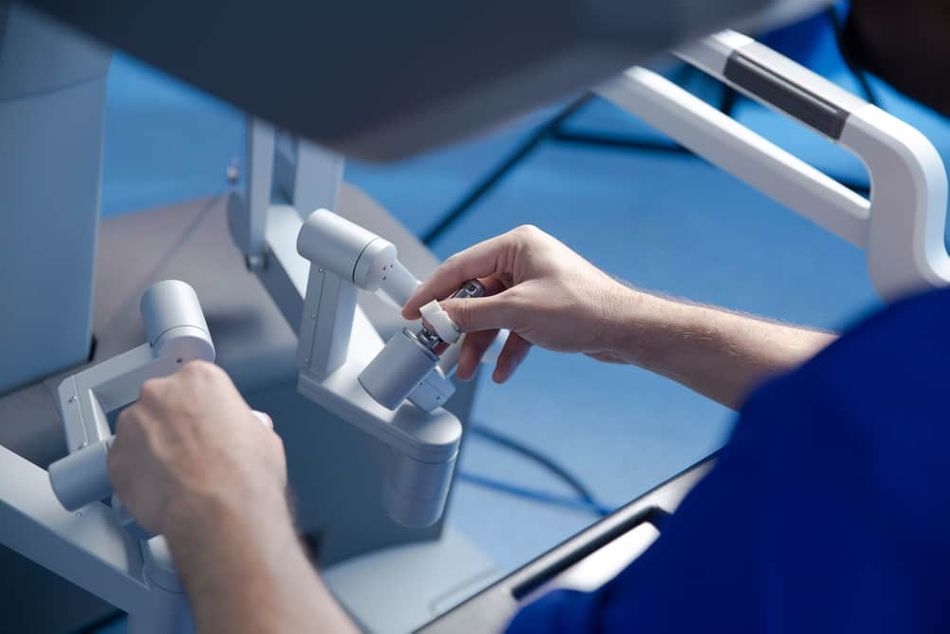 Many types of surgery can be assisted by robot control. Robotic surgery can be more accurate and therefore lead to better patient outcomes than manual surgery.

One of the most notable examples of robot manipulators in healthcare is the Da Vinci Surgical System, which is used for surgical procedures like prostatectomies, hysterectomies, and cardiac valve repairs. Controlled using a console, the system has end effectors that can function as scalpels, scissors, electrosurgical devices, or grippers. One limitation of the design is a lack of haptic feedback for the operator.[2]

Some of the most notable (and high-cost) applications of manipulator robots can be found in space, where there are a limited number of human operators available to carry out maintenance and other potentially dangerous tasks.

One example of a space-based manipulator system is the Canadarm. Weighing 450 kilograms, the huge Canadarm manipulator was developed to manipulate payloads on the NASA Space Shuttle. Rather than use a claw-like end effector, the space robot used a three-wire system inspired by elastic bands.

Robotic manipulators are some of the most important devices in modern manufacturing, and their use enables efficient automated assembly lines in fields like automotive, shipbuilding, and consumer goods. However, they are also used in other fields, and their use will only increase in the future due to their accuracy, efficiency, and ability to reach otherwise inaccessible places.

The most important distinguishing feature of a manipulator is the kinematic movement of its arm — the design of its various links and joints, in other words. The arm type largely determines the suitability of a manipulator for a certain task (as end effectors are more versatile and interchangeable). For example, SCARA robot manipulators are widely used for pick and place applications, while gantry robot manipulators excel at lifting heavy loads.

FFF vs FDM: Is there any difference?

What are injection mold sprues, runners, and gates?

Robotic joints, which are sometimes known as axes, are the moveable parts of a robot that cause relative motion between adjacent links. These links refer to the rigid components that connect the joints to ensure their proper and straightforward operation. To guarantee precision and accuracy while using a robot, it is crucial to check that the joints are operating as intended. This article gives a detailed explanation of robotic joints, and the types of robots and mechanical joints used in robotic technology.