The virtual knife, better known as the CyberKnife® System, is an alternative to conventional radiotherapy. “With this system, we perform radiosurgery – i.e. a treatment that applies radiation with the utmost precision. Thanks to the integration of an image guidance system with robotic technology, we achieve sub-millimeter accuracy,” explains Prof. Dr. Alexander Muacevic, radiosurgeon and neurosurgeon at the CyberKnife Center in Munich.

The original ideas behind the device date back to 1987 at Stanford University in the USA. There, the first commercial system was established as early as 2001, already with an integrated KUKA robot.

Back then, most robot manufacturers shied away from having their systems used on patients. Not the case with the market leader from Augsburg, which also distinguished itself with strong support for Accuray, the medical product manufacturer that produces the CyberKnife® System.

The number of patients treated with the CyberKnife® System, the robot-assisted system for precision radiation, is growing

The CyberKnife Center Munich-Grosshadern was opened in 2005 in cooperation with the University Hospital Munich. Today, more than 350 CyberKnife® Systems have been established worldwide. In Munich, the third generation of the virtual knife is already in operation. “We are able to perform high-precision robot- and image-guided irradiation of tumors throughout the body – from the brain to the spinal column and in various organs, such as the lung, liver, kidney or prostate,” emphasizes Prof. Alexander Muacevic. 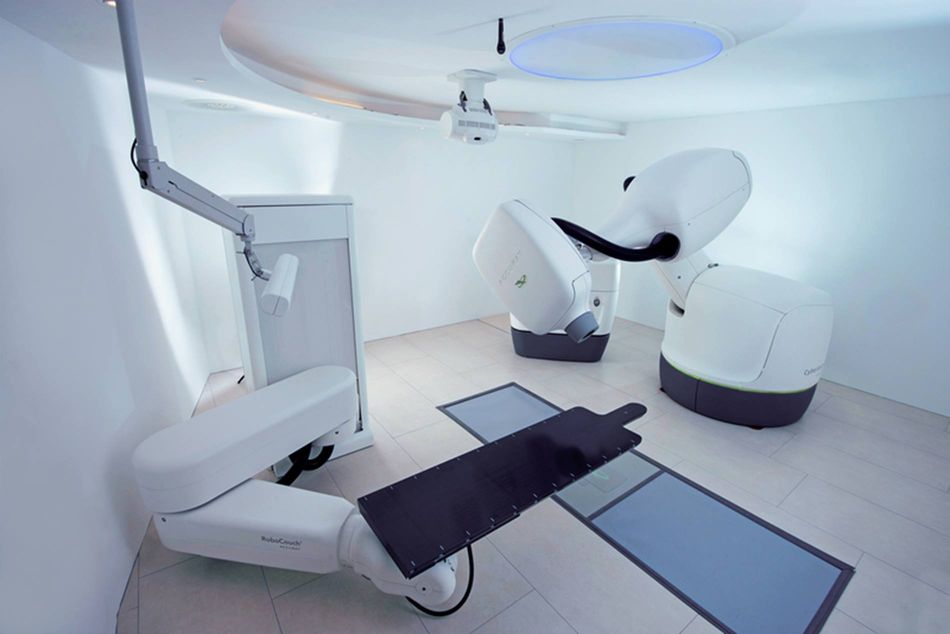 Apart from the robot integrated into the CyberKnife® System, there are also several digital X-ray cameras and an additional infrared camera which are needed for tracking brain and spinal treatments as well as for radiation treatment of organs. Based on these technologies a breathing model can be built, so the tumor can be irradiated with pinpoint accuracy, minimizing damage to surrounding tissue. Additionally, the integrated RoboCouch system – a robot-guided treatment table, which is also based on KUKA robotics – enables intelligent positioning of the patient to the planned treatment position without manual alignment of the patient. This shortens the duration of the treatment and ensures greater precision of radiosurgery.

Successful cooperation due to development competence and reliability

Accuray has particularly praised the development team of its partner of many years, which has played a decisive role in establishing new generations. “I always have the impression that the robot in the CyberKnife® System is somewhat underemployed, that for all its precision it could still do more – particularly with regard to speed,” says Prof. Alexander Muacevic, praising the KUKA technology. This opinion is reinforced by the fact that there has never yet been a problem with the CyberKnife® System at the CyberKnife Center in Munich. “Over all the years, it has proven to be extremely stable and not at all vulnerable to technical problems. In the past 15 years, we have not had a single failure. That is really excellent,” affirms the radiosurgeon. 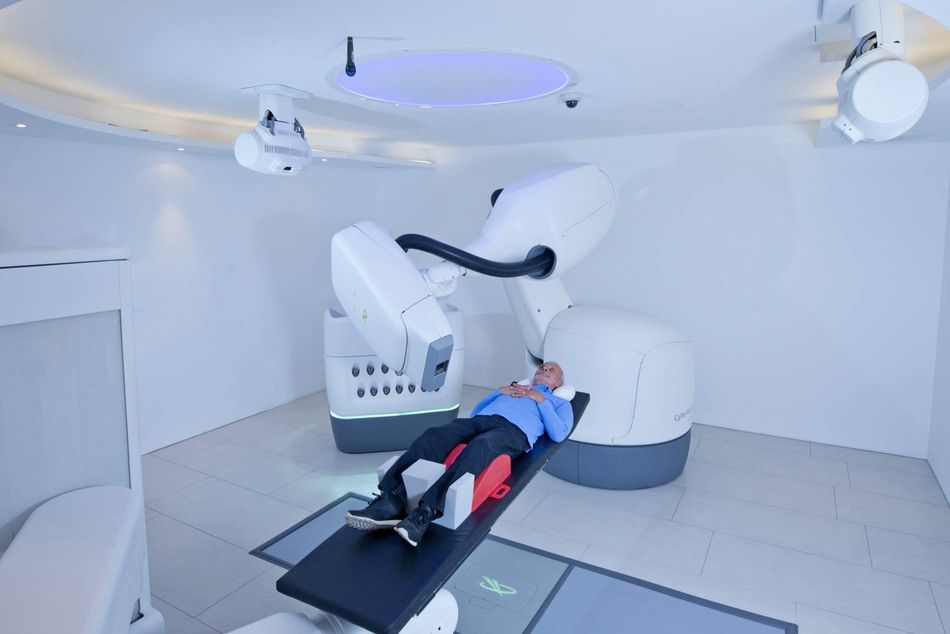 Fast and precise treatment of tumors and metastases with robots

Before treatment, the doctor contours the tumor based on the image data generated by CT and MRI and tells the medical physicist the dose for irradiating the tumor. Based on this information, the medical physicist then creates a treatment plan that is transferred to the software. The treatment is then automatically started and fully executed. This is where the KUKA robot in the CyberKnife® System comes in. Doctor and technician monitor the treatment – the actual work is carried out autonomously by the CyberKnife® System. “And this with a degree of precision that no surgeon could match. Achieving accuracy of 0.5 millimeters manually is impossible,” adds Prof. Alexander Muacevic. 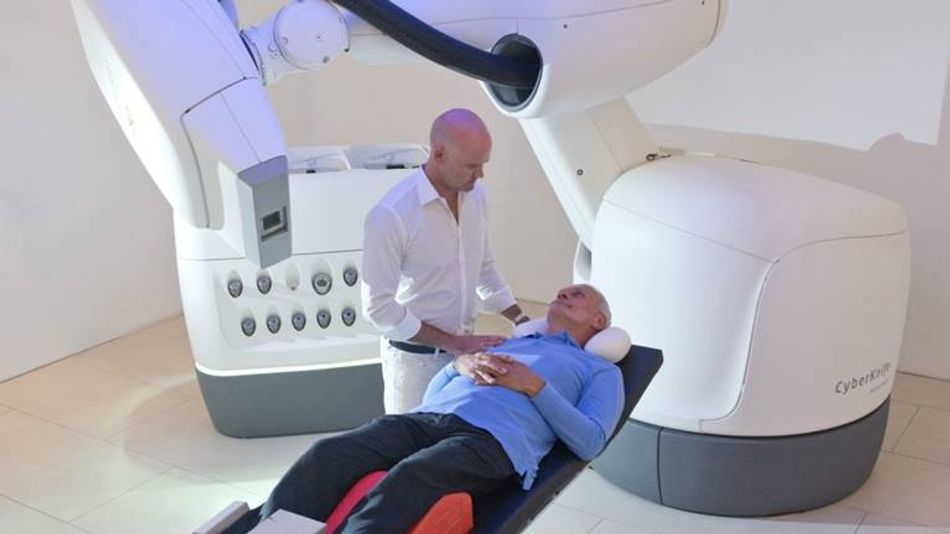 Less stress for patients due to robots for medical applications

It is this precise targeting of the radiation that is the key benefit of the robot in the CyberKnife® System. It can be used, for example, for treating benign brain tumors, so-called vestibular schwannomas or meningiomas. These would otherwise be removed in a six-hour operation and would be followed by at least a week in hospital and eight weeks of rehabilitation. With the help of CyberKnife® System the duration of the treatment can be reduced tremendously: 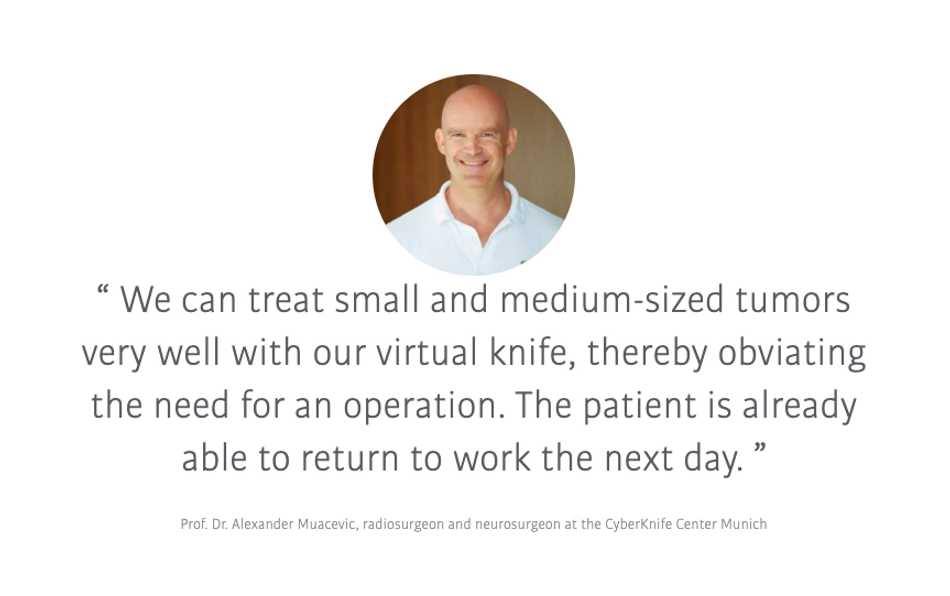 There is nothing comparable on the market, because the robot in the CyberKnife® System ensures a degree of flexibility that a normal radiotherapy device is simply unable to achieve. In the CyberKnife Center, the technology adapts to the patient, and not the other way around. The CyberKnife® System offers more than 1,600 different irradiation options with dynamic components. “This is not possible with a normal radio-therapy device, as these are essentially fixed and can only ever rotate about one or two axes,” emphasizes Prof. Muacevic. 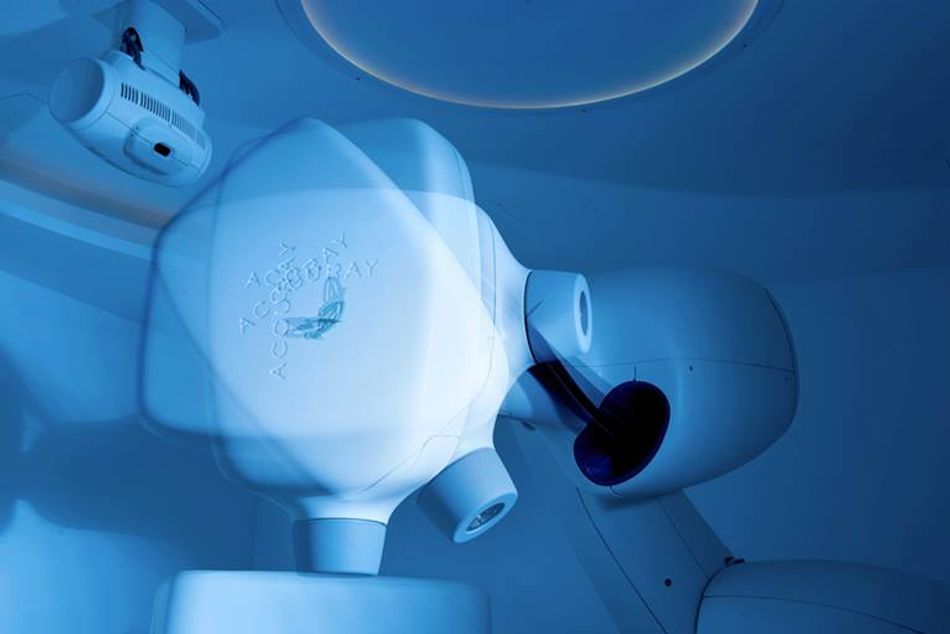 Plenty of room for further development of the CyberKnife® System

The physicians in Munich are currently testing the system for the treatment of cardiac arrhythmia. Furthermore, Prof. Alexander Muacevic also sees potential in the fight against conditions associated with tremor. Since last year, the CyberKnife® System has been used in Munich in the treatment of prostate cancer. “As an alternative to a total operation, we can drastically reduce the treatment time from eight weeks to a single week – and it is scientifically documented that the results are at least comparable if not better,” says Prof. Dr. Alexander Muacevic.

We're one of the world’s leading suppliers of intelligent automation solutions. Our international customers come from, among other sectors, the automotive industry and general industry. KUKA offers you everything from a single source: from the individual components to fully automated systems.

The KR 3 AGILUS: Robotic grippers for Industrial Assembly in the electronics industry

The KR 3 AGILUS is an invention from KUKA's robotic production machines. Its application is for a variety of tasks including sensitive assembly in the electronics industry with high speed and precision.