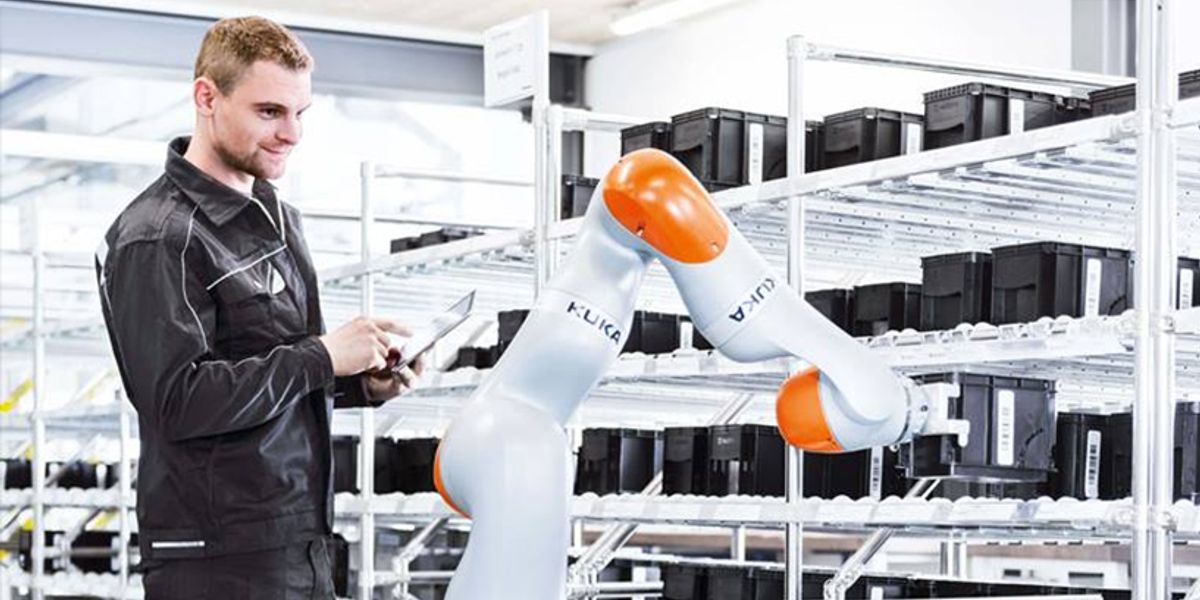 In human-robot collaboration, human and machine work hand in hand. The human operator controls and monitors production, the robots perform the physically strenuous work. Both contribute their specific capabilities.

One key element of the future production landscape is highly flexible Human-Robot Collaboration (HRC). This article describes 3 case studies which illustrate how collaborative robots change the way people will manufacture.

KUKA, one of the world's largest suppliers of industrial robots, has written a free, downloadable white paper called "Shaping future production landscapes." The white paper describes 'megatrends' that impact manufacturing and 3 key factors to designing production infrastructures that can meet the requirements of the future.

In human-robot collaboration, the robot assists the human operator. This means: The machine does not replace the human, but complements his capabilities and relieves him of arduous tasks. These can include overhead work, for example, or the lifting of heavy loads. Autonomous, collaborative robots are also used to supply production workstations.

In the ideal 'factory of the future' there is no separation between automated and manual workstations. Humans and robots collaborate optimally – without separation and without safety fencing.

HRC-capable robots (often labeled 'Collaborative Robots' or 'Cobots') are rendered mobile and capable of performing different tasks flexibly using mobile platforms. They can thus be individually deployed at whatever location and for whatever purpose corresponds to production requirements – dependent on the required batch size, for example.
Furthermore, these types of robots offer maximum flexibility by means of so-called spontaneous automation: They support a user as an assistant in the case of workload peaks and resource bottlenecks in production operations.

Human-robot collaboration changes industrial production and manufacturing and can bring a number of advantages over traditional automation or manual labor:

To give you an idea of the impact of collaborative robots in the workspace we've gathered 3 case studies to show you the impact of these robots and the challenges they overcome. 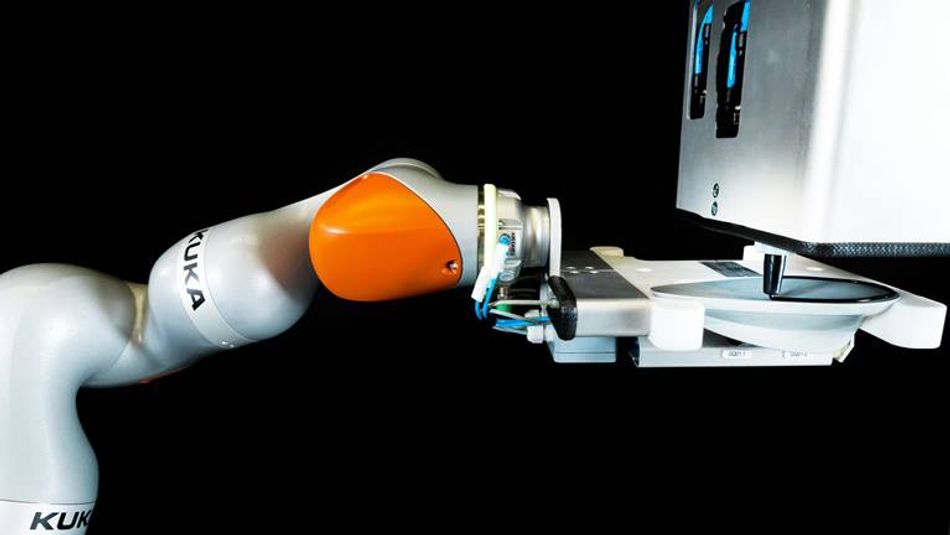 At the company, humans and robots work together in final assembly without the need for physical safeguards. Sensitive lightweight robots are used for the adhesive bonding of GPS antenna covers and tanks in the vehicle body. The solutions improve the quality of the adhesive bonding result, save time and lower unit costs.

For the automated process of gluing the tank into place in final assembly, the skilled worker guides the tank to a turntable with the aid of a manipulator. There he cleans it, moves it into the correct position and transfers it directly to the robot for further processing. When the starting point is reached on the stationary tank, the nozzle opens under pressure so that no air bubbles are created. The robot then applies the adhesive bead onto the tank very evenly. Sensors on the application head monitor the accurate height of the bead. Thanks to its seventh rotating axis, the robot glues in a radius of 360 degrees – without re-orienting or having to interrupt the bead. As soon as the robot has completed its task, the skilled worker fits the tank into the vehicle body at the specified position.

Dürr has already sold ten systems in the field of adhesive bonding, and is working on HRC solutions for the robot-based adhesive bonding of small washers and other components.

Case Study 2: Human-robot collaboration during the adjustment of headlights. 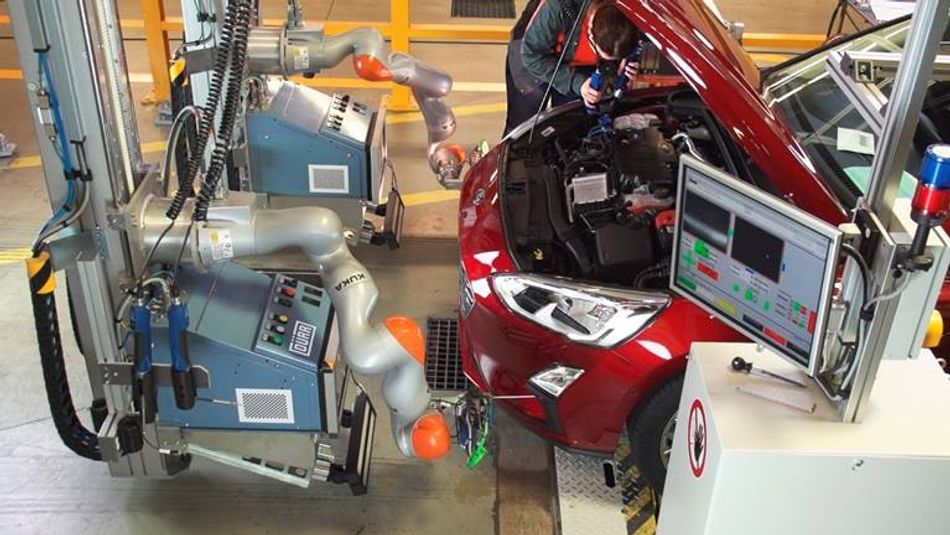 To reduce the strain on the workers, two KUKA LBR iiwa cobots perform the unergonomic task of adjusting fog lights at Ford. Parallel to this, human colleagues can adjust the main headlights.

To provide relief for the human worker during this ergonomically unfavorable work and simultaneously achieve improved of the adjustment, Ford VOME (Vehicle Operation Manufacturing Engineering), Dürr Assembly Products and KUKA have jointly developed an innovative alternative concept for the conventional process as part of a feasibility study. The solution called for the use of the KUKA LBR iiwa cobot. The sensitive robot adjusts the fog lights fully automatically. In doing so, humans and robots work on the same vehicle without additional safety equipment.

While the human operator adjusts the conventional headlights, the cobot adjusts the hard-to-reach fog lights. Two lightweight robots are already in use in four headlight/driver assistance system test stands for the new Ford Focus C519 at the Ford plant in Saarlouis.

The secret of the HRC concept

With its size and joint torque sensors, the robot detects contact immediately and reduces its level of force and speed instantly. These characteristics make it possible to work with human operators in confined spaces. Furthermore, with its high-performance servo control, the cobot detects contours quickly under force control. In combination with an end effector specially developed by Dürr (consisting of a camera system and an adjustment screwdriver), the robot positions the adjustment screwdriver according to the hole coordinates acquired by the camera system. The adjusting screw itself is located approximately 80 mm behind the hole in the bumper. Thanks to sensitive movements, the cobot optimally positions the adjustment tool into the screw head.

Redundant safety is provided by the HRC-capable, heavy-duty aluminum gantry from Dürr Assembly Products – on which the KUKA LBR iiwa is positioned in a ride-on installation above the light collecting box directly in front of the headlight to be adjusted. The advantage here: additional robot positioning can be dispensed with. 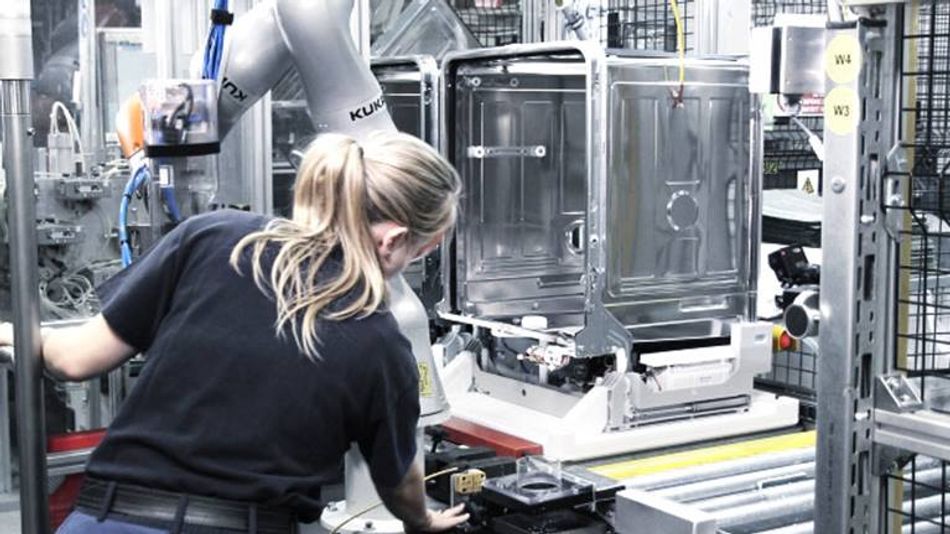 In the future, BSH Hausgeräte GmbH will be using a KUKA flexFELLOW to carry out the installation of pump wells on the dishwasher production line.

The BSH Hausgeräte GmbH factory in Dillingen, Germany is Europe’s largest and most modern factory for dishwashers. Around 10,000 machines leave the production line every day in two-shift operation. There are a total of seven production lines for manufacturing dishwashers.

Screw fastening of the pump covers in the dishwasher is an ergonomically inconvenient task as the employee has to lean into the dishwasher housing to perform the task. The mechanical assistant now takes on this monotonous step in the process.

Its contribution has already been tested successfully over several months as part of a pilot system. In addition to relieving the human operator of a cumbersome task, the robot also contributes by documenting its work and indicating whether the screws have been tightened correctly or not.

The key challenge when designing the system was to ensure that the manual workstation remained unchanged and that the automation solution could be integrated into the existing assembly line. Its sensitive and responsive capabilities enable it to recognize if, for example, a pump well component is not positioned correctly and then presses it into place.

The advantages of using a cobot:

Using its responsive capabilities, the cobot can then calibrate itself independently at its workstation, use a search run mode to find the screw positions, re-apply pressure to the component if it is not correctly positioned and finally tighten the four screws.

We're one of the world’s leading suppliers of intelligent automation solutions. Our international customers come from, among other sectors, the automotive industry and general industry. KUKA offers you everything from a single source: from the individual components to fully automated systems.

After the introduction of radiotherapy, the use of metallic knives in the field of tumor treatment decreased. Now the knife has been experiencing a revival for several years. Yet, the knife in question is not a physical instrument, but a virtual one.