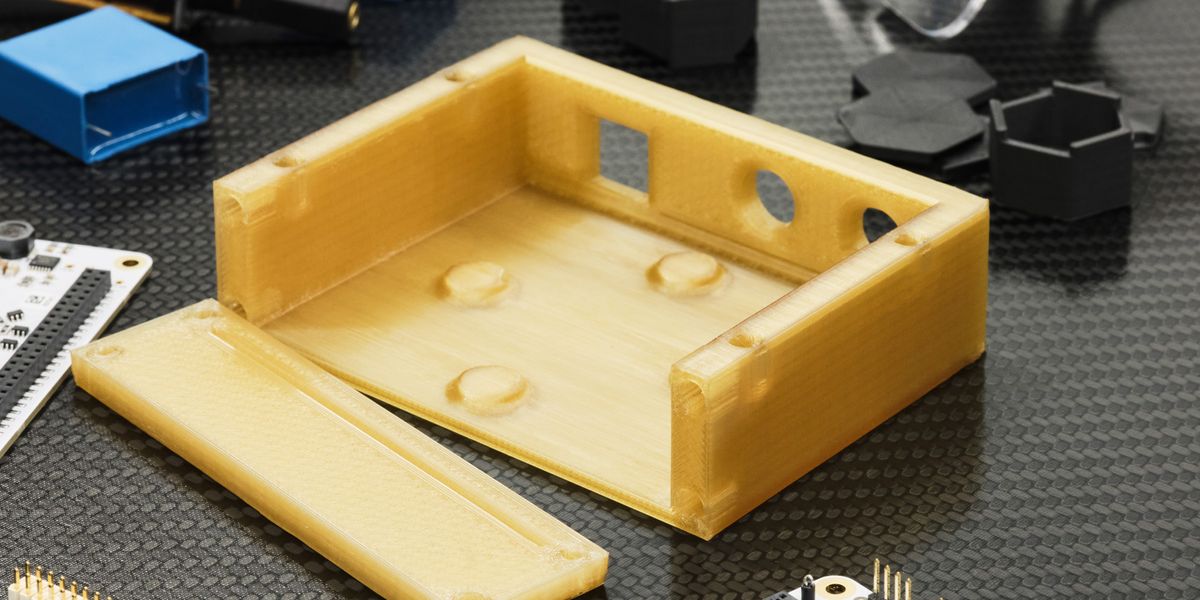 3D printing was used for both prototypes and end-use parts that will be on board the first commercial landing on the moon.

In December 1972, NASA launched its Apollo 17 mission, sending three astronauts to the moon for almost a fortnight. The mission, while a success, marked NASA's final Apollo mission. Nearly 50 years after this historic event, we are seeing a renewed interest in lunar and space exploration driven by new technologies, including 3D printing.

Astrobotic Technology has selected Canadian 3D printer manufacturer AON3D to 3D print components for the Peregrine Mission 1, which will see its Peregrine Lander launch to the moon in 2022. AON3D will 3D print hundreds of mission-critical parts and private payload 'MoonBoxes' for the lunar lander - the items will be the first-ever 3D printed parts to reach the moon. Further, the lander will be the first American vessel of its kind to soft-land on the moon since Apollo 17.

Measuring just under two meters in height, the Peregrine Lunar Lander is a compact vessel designed to deliver commercial payloads to the moon's orbit and surface. Engineered to be sent into space on commercial launch vehicles, the robust lander also provides power and data services to payloads over the course of the mission.

Designed and built by Astrobotic, the Peregrine lander is an elevated box-like structure measuring 2.5 meters in length and 1.9 meters in height. The lander's body is primarily made of aluminum, consisting of isogrid shear panels and honeycomb-structured mounting surfaces. Other notable integrations include solar cells that power lithium-ion batteries, several types of communications antenna, and five ISE-100 667-N propulsion thruster engines. 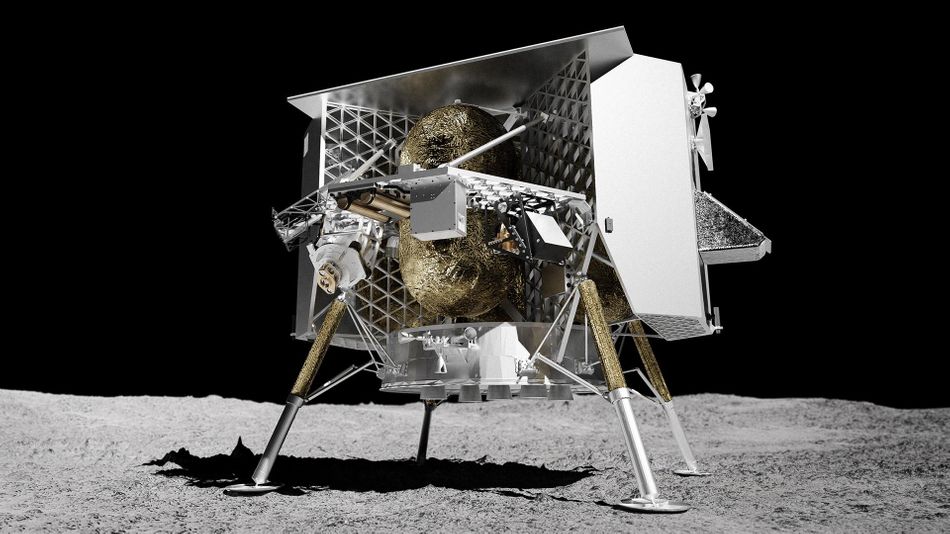 Presently, Astrobotic is preparing for the lander's first mission, Peregrine Mission 1 (PM1), which will see the lander launched aboard United Launch Alliance's (ULA) Vulcan Centaur rocket in 2022. The rocket is powered by two BE-4 engines made by Blue Origin, which integrate a number of 3D-printed components themselves.

For its upcoming mission, the Peregrine lander will be equipped with nearly 30 payloads weighing up to a maximum of 90 kg. Among these payloads will be 14 scientific packages sent through NASA's Commercial Lunar Payload Services (CLPS) program, including a Laser Retro-Reflector Array (LRA) and Neutron Measurements at the Lunar Surface (NMLS). PM1 will also be carrying the first DHL MoonBox, a 3D-printed payload container holding a collection of personal items from Earth, including minted bitcoin and dogecoin. In future missions, the 3D-printed MoonBoxes will be used to carry small payloads at reasonable rates.

3D printing—specifically AON3D's M2+ high-temperature industrial 3D printer—has played a central role in the development and production of Astrobotic's Peregrine lander. Not only has the technology been implemented in the prototyping and final production stages of the lander - but it has also been vital to creating the Peregrine in a time- and cost-efficient manner.

Over the course of the lander's development, hundreds of parts were prototyped using 3D printing, including altitude control systems (ACS) thrusters, avionics boxes, relays, bus bars, connectors, and more. Using traditional manufacturing processes such as CNC machining or injection molding would have significantly extended the development timeline for the lander, driving costs up to prohibitive levels and increasing the risk of sub-optimal designs. 3D printing, by contrast, allowed Astrobotic's team to rapidly iterate prototype designs, test them, and tweak or fix them until the best design was achieved. The use of a low-cost polymer material—in this case, ABS—also helped to drive down the cost of prototyping and development. 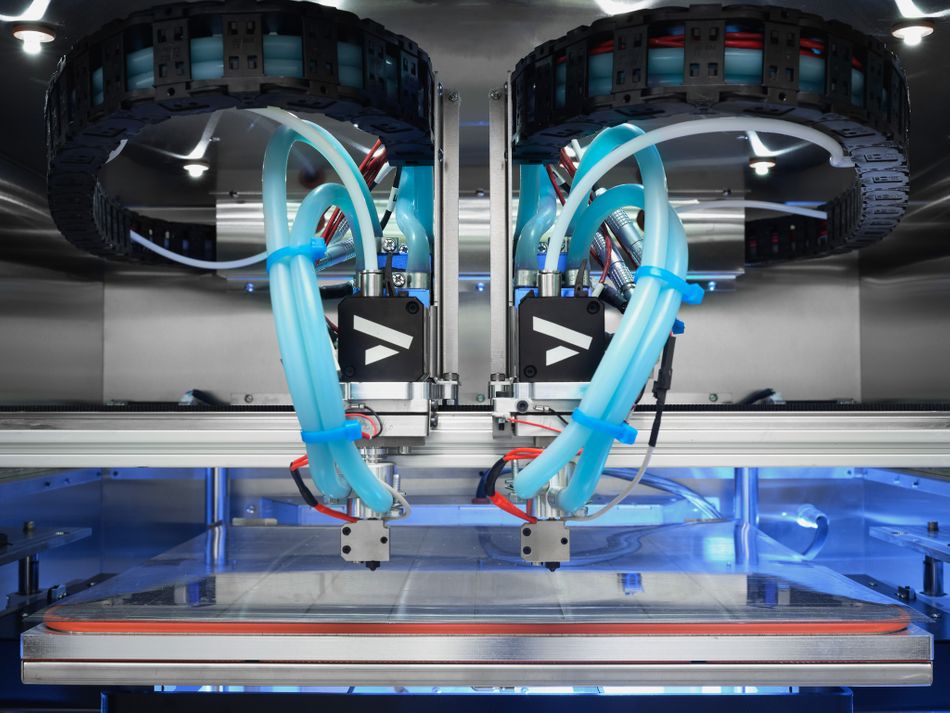 3D printing was also used beyond the prototyping stage: Astrobotic used the AON M2+ for several end-use mission-critical parts for the Peregrine lander. Next year, these parts will become the first 3D-printed parts to ever land on the moon.

The integration of 3D-printed parts made from high-performance thermoplastics offers several distinct benefits. For one, 3D printing facilitates the production of one-off or small-series components, which is ideal for spacecraft structures that are not mass-produced. For another, the technology opens up a host of new possibilities for part design, including lightweight internal structures and optimized geometries. Perhaps most importantly, however, is that 3D-printed high-performance thermoplastics are significantly lighter than metal materials while also offering comparable properties. 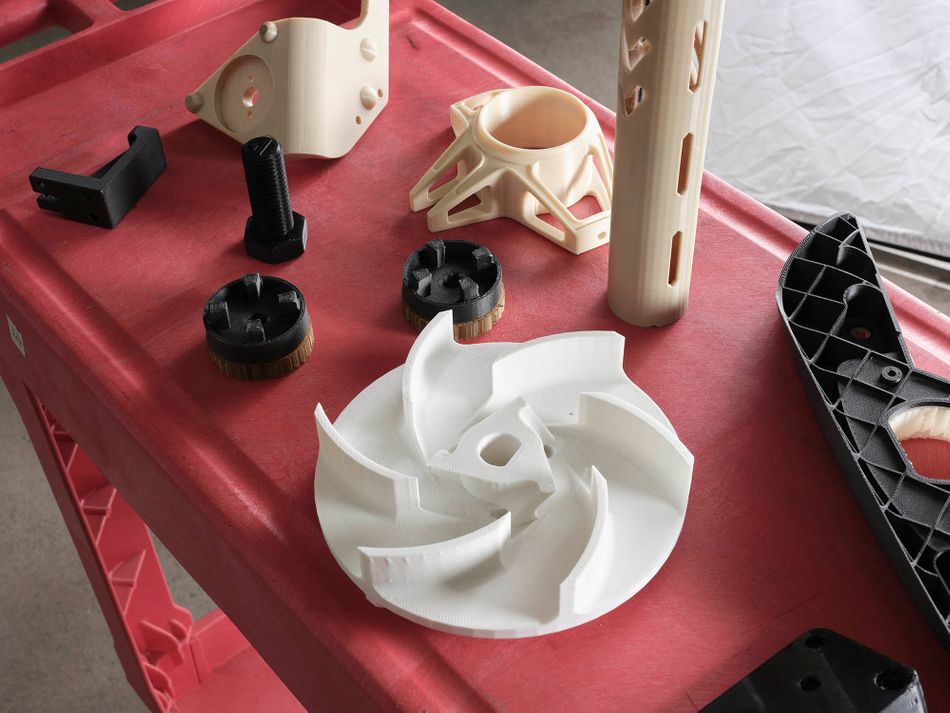 In the case of the Peregrine lander, Astrobotic replaced hundreds of aluminum components with 3D-printed thermoplastic parts, resulting in a dramatic weight reduction of 50%. The components, primarily in the lander's avionics box, are 3D printed from ULTEM, a high-performance thermoplastic known for its excellent thermal and chemical resistance, as well as its high strength and stiffness. In total, there are more than 250 3D printed parts inside the avionics box, safely holding circuit boards for command and data handling in place and offering protection from vibrations and the extreme conditions of space.

Additionally, 3D printing was employed for the production of the DHL MoonBox, a compact commercial payload container created by Astrobotic and logistics giant DHL. The lightweight container was 3D printed using CF PEKK, a high-performance plastic capable of withstanding the harsh conditions of space. On PM1, a DHL MoonBox will be carrying two minted cryptocurrency coins to the moon as a token of modern society.

"There is no environment as demanding as the vacuum of space, and we need parts that are able to withstand the immense challenges of launch and spaceflight," explains Astrobotic Mechanical Engineer Clay Inman. "Being able to go from full-scale, economical prototypes to space-ready parts—using PEEK, PEKK, and ULTEM on one machine—was huge for achieving our ambitious goals. Now, we can rigorously test our parts, create custom tooling, and then go right into printing proprietary, mission-ready components with engineering-grade materials."

Developed by Montreal-based AON3D, the AON M2+ 3D printer is an industrial extrusion 3D printer with currently the largest build volume for a sub-$50,000 machine. The printer, with its fused filament fabrication (FFF) process (also known as fused deposition modeling (FDM)), is compatible with thousands of materials, including high-performance thermoplastics like ULTEM, PEKK, and PEEK.

The AON M2+ 3D printer includes a heated print bed (up to 200°C), heated build chamber (up to 135°C), and dual independent extruders with temperatures up to 500°C. The combination of these three adjustable heat features, along with changeable build surfaces and open-access printing parameters, enable the use of many plastic materials, from low-cost prototyping filaments to engineering-grade thermoplastics.

The 3D printer contains a 450 x 450 x 580 mm build volume, allowing users to 3D print large-scale parts or multiple small parts in a single build. AON3D relies on North American-made hardware to produce its systems, which are today used across various industries by end-users such as Blue Origin, the U.S. Air Force, XEROX, and many universities. 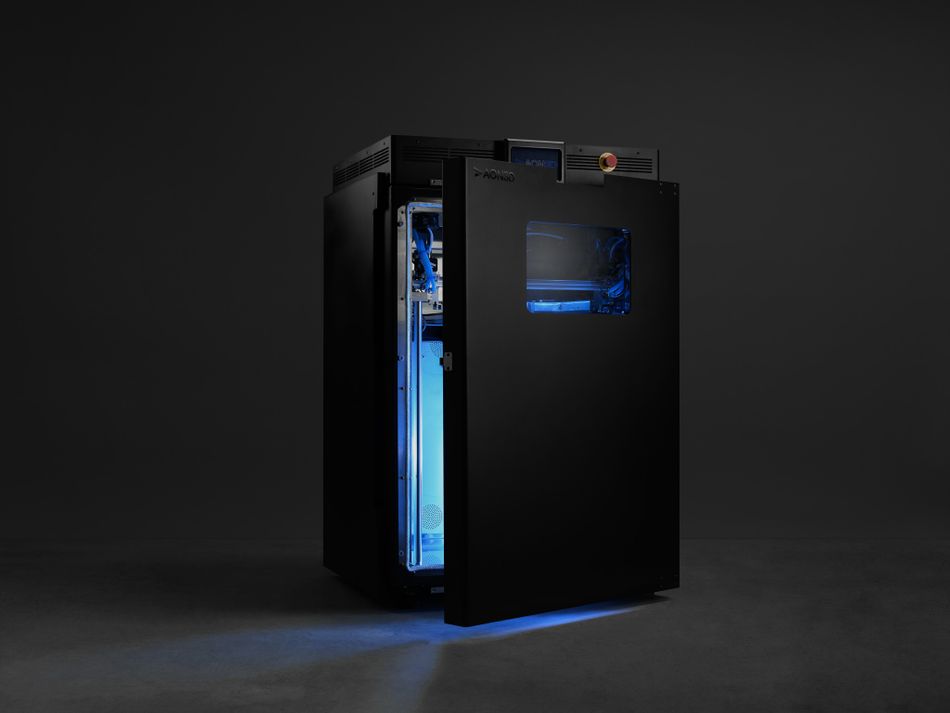 As a new era of space exploration and travel takes hold, it is no coincidence that we are seeing a rise in the use of 3D printing for space applications. The technology is playing an integral role in the production of next-gen launch vehicles, rovers, satellites, and landers. In fact, 3D printing is part of why these new space solutions are even viable, allowing for the economical production of single or small series components.

The design freedom afforded by 3D printing is also important to consider in the context of space. Because weight is one of the primary cost drivers for space launches—with every kilo costing tens of thousands of dollars—weight reduction wherever possible can save significant sums. 3D printing can and is being used to redesign and optimize components for launch vehicles and payloads, enabling space companies to exploit strategies like internal lattices and lightweight thermoplastics to achieve weight savings.

While Astrobotic's mission will mark the first time 3D printed components have landed on the moon, there have already been a number of milestones for 3D printing in space. In 2014, for instance, NASA and Made In Space launched the first 3D printer into space—a zero-gravity system that has been used aboard the ISS to print tools and functional components. The same year, we also saw Aerojet Rocketdyne successfully test an entirely 3D printed rocket engine.

Fast forward to today, and many leading space players—including SpaceX, Blue Origin, United Launch Alliance, and Relativity Space—are using 3D printing in their prototyping and development. Smaller startups and research labs are also leveraging 3D printing for the production of new, compact satellites for data collection and communications. Looking farther ahead, many innovative minds in the space segment envision the deployment of 3D printing for on-site construction of lunar and planetary habitats.

Soon, AON3D and Astrobotic Technology will be among the companies to have achieved a significant first in the ever-evolving and ever-entwined space exploration and 3D printing areas. Follow AON3D for further updates on the Peregrine lander's first mission.

EPFL moves boldly into space with its CHESS satellites

CEO and co-founder of Wevolver. Trained as an industrial designer. Previously founded a design studio that pioneered 3D printing large functional objects in the late 2000s. I also worked a lot with composite materials. Wevolver was a side-project that got positively out of hand...

Poking around under the hood is in Yomary Betancur Vesga’s comfort zone. As an Embry-Riddle Aeronautical University graduate student, she handled all of her own car maintenance herself — a budgetary necessity, she said.

EPFL moves boldly into space with its CHESS satellites

The EPFL Spacecraft Team has set itself the ambitious goal of launching two satellites by 2023. With this bold initiative, this student team hopes to gain further insight into the chemical composition of the outermost layers of our atmosphere.

Technology will collect critical data about the harsh entry environment during Perseverance’s entry this Thursday.