The prototype motorized BirdBot, seen here with legs in the locked position, uses a quarter the energy of its immediate predecessor.

Watching a bird like an ostrich running reveals a locomotive mechanism far closer to a creature like the mighty Tyrannosaurus Rex than the human leg, and few could doubt its efficacy — leading a team at the Dynamic Locomotion Group of the Max Planck Institute for Intelligent Systems (MPI-IS) to wonder if current approaches for bipedal robot designs could benefit from being more bird.

“No current bipedal robot can run quickly, untethered, in natural environments over long distances,” the researchers explain in a recently-published paper. “However, these activities are commonplace for terrestrial animals. Paradoxically, animals vastly outperform current robots despite considerably slower sensing and information transfer rates.”

Inspired by, and defining, nature

Before you can take inspiration from bird locomotion, however, you need to ascertain why it’s so effective — and that’s not necessarily an easy task. “It’s not the nervous system, it’s not electrical impulses, it’s not muscle activity,” claims senior author Alexander Badri-Spröwitz. "We hypothesized a new function of the foot-leg coupling through a network of muscles and tendons that extends across multiple joints.

“These multi-joint muscle-tendon coordinate foot folding in the swing phase. In our robot, we have implemented the coupled mechanics in the leg and foot, which enables energy-efficient and robust robot walking. Our results demonstrating this mechanism in a robot lead us to believe that similar efficiency benefits also hold true for birds.”

Dubbed BirdBot, the resulting design is used to prove the team’s hypothesis in two directions: firstly that taking inspiration from the leg of a bird can boost the performance of a bipedal robot while simultaneously boosting energy efficiency; and secondly using the resulting robot design to determine the aspects of the leg which contribute most to the efficiency of its living inspiration.

Each leg of the BirdBot design uses just two actuator motors, with a traditional third replaced by a clever joint system featuring a joint based on intrinsic engaging and disengaging abilities. As the robot’s foot touches the ground and experiences load, the joint system tenses and stiffens to support the weight; as it’s lifted off and swung, a bi-stable snap-through joint driven by elastically-stored energy unlocks the leg into a slack configuration.

The BirdBot approach comes with a host of improvements over traditional designs, its creators claim. The most immediately obvious: It’s electronically simpler, using only two motors and with no need for on-board sensing or complicated control circuitry. Instead, the leg itself handles locking and unlocking automatically — and can even handle stabilization using a single feed-forward motor command.

Its biggest enhancement: Efficiency. Compared to the Cheetah-Cub design published back in 2013, BirdBot requires around a quarter of the energy for locomotion — putting its performance within the range, its creators say, of “an animal of equivalent weight.” 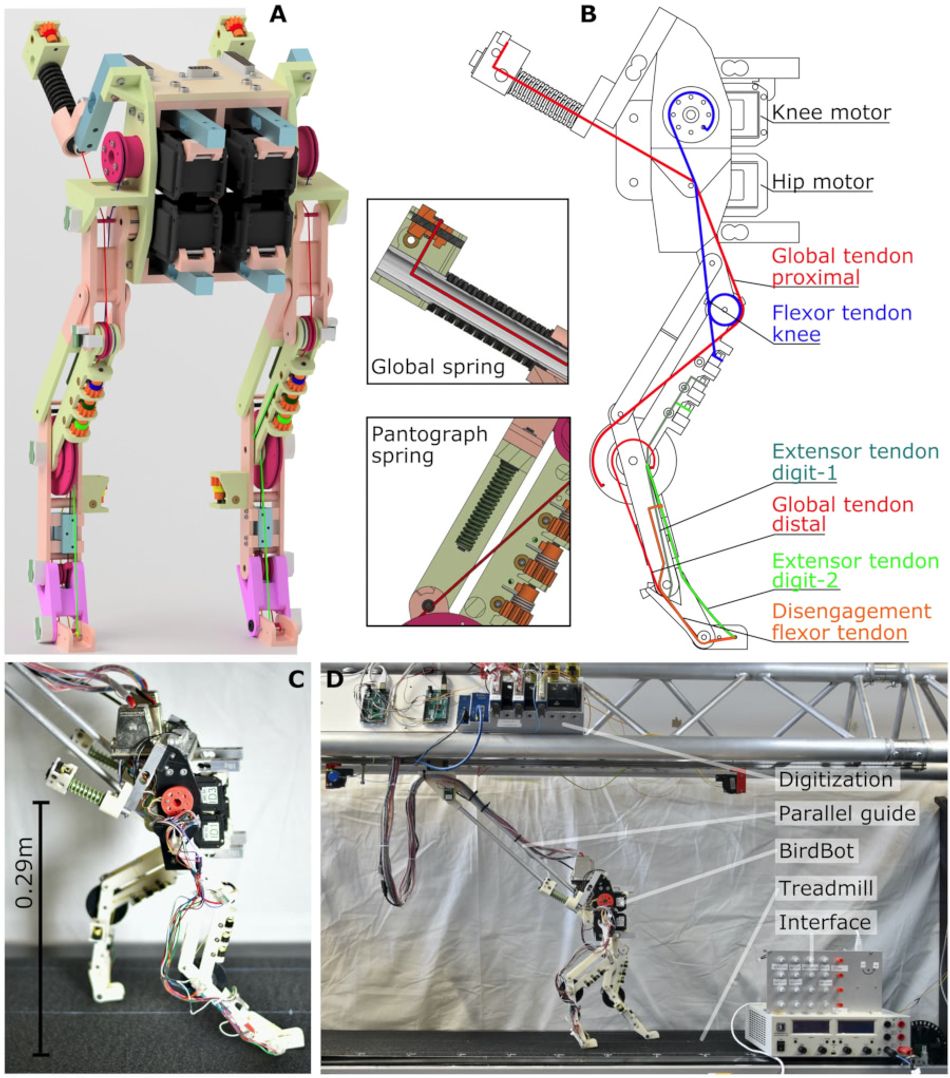 The 3D-printed BirdBot prototype operates with just two motors per leg, relying on a mechanical "clutch" system inspired by birds' legs for the remainder of its operation.

“Previously, our robots had to work against the spring or with a motor either when standing or when pulling the leg up, to prevent the leg from colliding with the ground during leg swing. This energy input is not necessary in BirdBot’s legs,” Badri-Spröwitz, who also led the Cheetah-Cub team, explains.

Other advantages claimed in the paper detailing BirdBot’s design include the ability to stand upright through torque loading, with all actuators unpowered — “reminiscent,” say its creators, “of a flamingo standing while sleeping” — and of being highly scalable, with one prototype created during the work standing 1.75m (around 5.7 feet) tall and able to hold the weight of a human being.

“On the basis of our analysis and physical demonstrations,” the team concludes, “we suggest that BirdBot’s leg design can become a blueprint for large legged machines.” 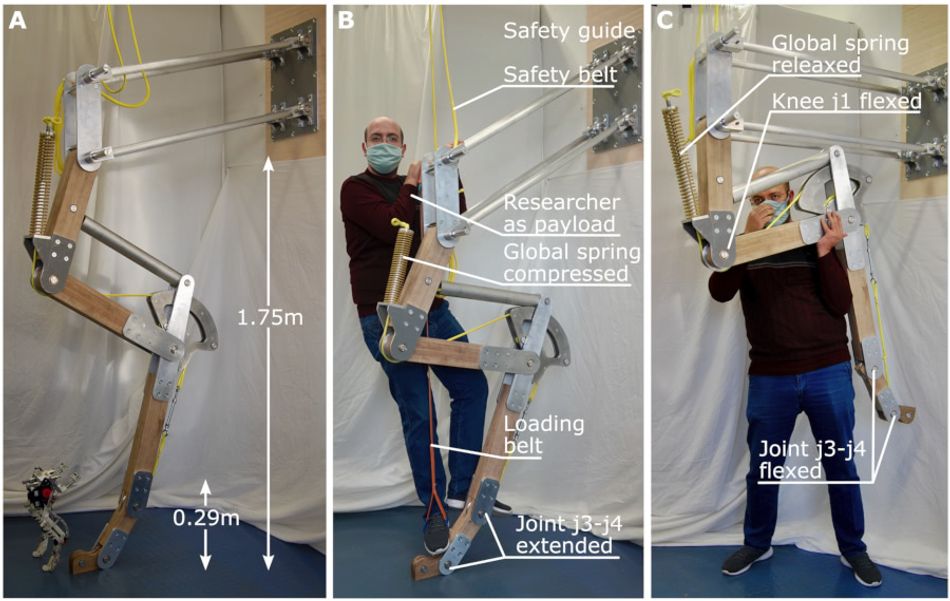 A large-scale version of the leg proved capable of holding the weight of an adult human — and its creators say it could be scaled up still further.

That’s not to say their work is finished, however. The current motorized BirdBot prototype, which uses off-the-shelf actuators fitted to a 3D-printed trunk and legs, has been tested on a treadmill with tethered guidance.

To create a version capable of standing freely and moving in three dimensions will require further research to prevent pitching, potentially involving a revised design or a shift to hip-only actuation. While operable without sensor input, the team also suggests that an investigation into how the clutch mechanism could be used alongside direct actuation and sensory feedback control to “merge the benefits of both systems.”

The team’s work has been published in the journal Science Robotics, with an open-access version available via author referral on the MPI publication page.

The robot arm, which is inspired by a woodpecker's tongue, can be extended many times its length, bent into an S-shape, and stored in a small space, like Doctor Octopus from the Spider-Man series.

Justin Werfel is a senior research scientist at Harvard’s Wyss Institute for Biologically Inspired Engineering, where he works on topics in complex and emergent systems, including swarm robotics, termite behavior, engineered molecular nanosystems, and evolutionary theory.