Thanks to software developed bicycle engineers can quickly calculate the most aerodynamic shape for a bike. The software applies artificial intelligence to a set of user-defined specifications. Engineers have used the program to design a bike that they hope will break the world speed record.

The current record for a bicycle travelling across flat road is 133.78 km/h, set in 2012 by a Dutch team at the World Human Powered Speed Challenge, which takes place every year in the Nevada desert. But last September, a team from IUT Annecy aimed to beat that record. The team used artificial-intelligence-based software developed by Neural Concept, to boost the performance of its bike. In just a few minutes, Neural Concept’s technology can calculate the optimal shape of a bike to make it as aerodynamic as possible. It can also be used for aerodynamics calculations in a number of other applications. The company is presenting its software in Stockholm today at the International Conference on Machine Learning.

From the outside, the IUT Annecy team’s recumbent bike looks more like a tiny racecar than a human-powered bicycle. It was custom-made to fit closely to the cyclist’s body. During the Challenge, he will have to ride down a 200-meter stretch of straight, flat road as fast as possible, after a run-up of 8 km. The design objective clearly isn’t cyclist comfort, but making the most out of every inch of the vehicle.

Coming up with faster, more detailed and more effective designs

Existing aerodynamic design methods require an enormous amount of computing power. Traditionally bicycle engineers think up different forms and then test them using computer simulation. But here, for the first time, engineers employed optimization software – rather than their own intuition – to define the recumbent bike fairing. The IUT Annecy team used Neural Concept’s software, specifying the bike’s maximum length and width and the space needed for the drivetrain and wheels. The program then sorted through all kinds of shapes, quickly comparing them in order to come up with the best one. For instance, the program helped the engineers determine the best location for the vehicle’s maximum width. 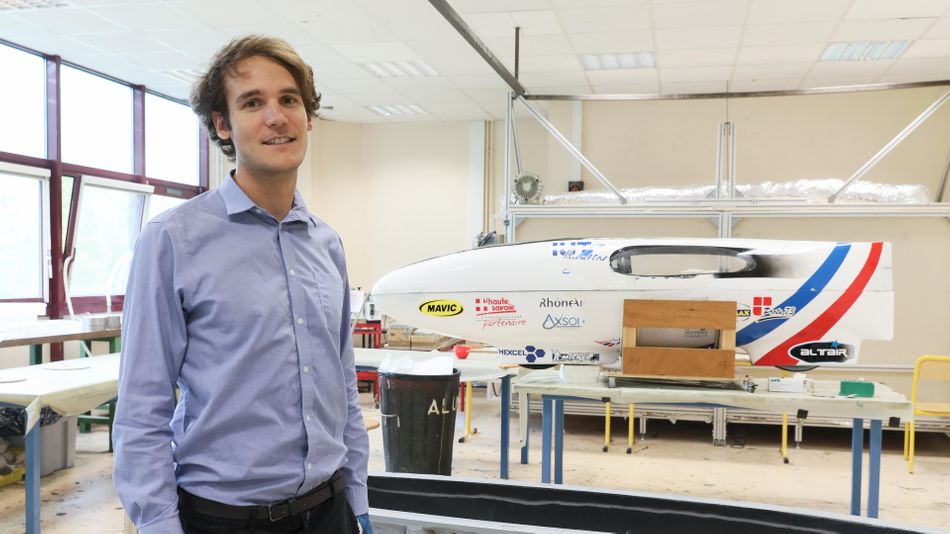 To develop the technology behind the software, researchers at EPFL’s Computer Vision Laboratory trained a convolutional neural network to calculate the aerodynamic properties of various forms represented by generic polygon meshes, which are collections of points used to generate 3D shapes. This type of artificial intelligence works by running through several layers, categorizing information from the simplest to the most complex. In the initial layers, the program identifies a shape’s contours; then it assigns the contours to an object and determines what category the object belongs to based on the expected outcome.

Engineers can use the software to carry out detailed analyses of different designs more rapidly and with better accuracy. “Our program results in designs that are sometimes 5–20% more aerodynamic than conventional methods. But even more importantly, it can be used in certain situations that conventional methods can’t,” says Pierre Baqué, CEO of Neural Concept. Another benefit is that the software can compare designs without human bias. “The shapes used in training the program can be very different from the standard shapes for a given object. That gives it a great deal of flexibility,” adds Baqué.

The World Human Powered Speed Challenge is a competition involving bicycles designed by teams of university students. The Challenge is a real-world test for both the IUT Annecy team and Neural Concept’s machine-learning technology. The software has myriad other potential applications too, such as for designing drones, wind turbines and aircraft. Other industry professionals clearly see its potential – Baqué has been invited to speak at the world’s biggest machine learning conference today in Stockholm. IUT Annecy and Neural Concept have already started working on the bike for next year’s race. It will be designed exclusively and entirely by the software, without any human intervention.

Based on designs from four previous generations of RIPSAW tracked vehicles, the M5 is an extremely mobile, unmanned robotic vehicle suitable for all-terrain conditions.