Researchers at the Technical University of Denmark (DTU) have developed a 3D printing approach which can vary the hardness of the resulting object, creating items which can vary continuously between soft and hard — and suggest that the printer, which operates like a computerized tomography (CT) scanner working in reverse, could one day print objects near-instantaneously.

The team, including corresponding author Yi Yang, assistant professor at DTU's Chemistry department, hasn't been directly focused on making 3D printing faster. Instead, it has been working on a way to print a single object which has a variable hardness. Using a custom-built 3D printer, which uses two off-the-shelf projectors as light sources for curing a carefully-mixed resin contained in a continuously-rotating vat, the researchers were able to create objects soft in some areas and measurably harder in others.

"We can vary the softness of our 3D object based on our computer model by controlling the different wavelengths delivered from the light sources," Yang explains. "This technology might be able to replicate the softness and unique build-up of blood vessels, capillaries, and muscles."

The technique works by combining two different wavelengths of light. One projector in the system uses ultraviolet light around the 365nm wavelength; the other uses visible light at around 455nm. Some areas are exposed to pure UV light and harden; others are exposed to just visible light and solidify but remain soft. Exposing areas to a mixture of the two, meanwhile, allows for a gradient of hardness under the designer's direct control. 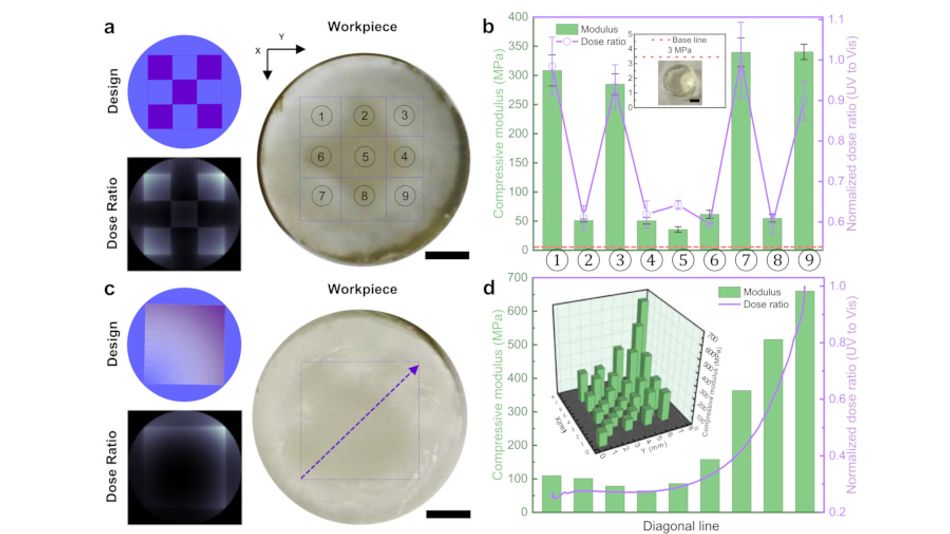 Objects printed on the DTU CT scanner-like printer can be "programmed" for varying hardness at different points.

Printing at the speed of light

While the team's latest paper is focused almost entirely on this novel ability to print objects of varying hardness, the 3D printer they are developing has other advantages over traditional 3D printing methods. One is that, because objects are printed directly into a vat of resin by beamed light, there's no need to print supporting structures which waste material and must be removed during post-processing.

The other: The potential to dramatically reduce print times, to the point where they become near-instantaneous.

"The processing time of AM [Additive Manufacturing, traditional 3D printing] scales with n3-D, in which D is the intrinsic dimensionality of the AM method. Although every single step in a lower-dimensional AM method can be fast," the team explains, "n can be enormous for structures that demonstrate fractality [subdivision] on even only a few orders of magnitude, rendering the processing time impractically long for many applications when D<3."

The projector-based printer, by contrast, is capable of curing multiple points in a desired 3D print in parallel using a technique known as tomographic volumetric printing, or TVP. In effect, the printer becomes the reverse of a CT scanner: Projecting a virtual 3D object into space within the resin vat, where a CT scanner would create a virtual representation of a real-world object.

The team printed a range of objects, proving the technique could apply regardless of complexity.

"In principle," Yang claims, "the technique allows one to send a CT scan of an object and press print. The moment after, there will be a copy of the object in real-life softness."

While the promise is there, the technology may be some way away from Yang's vision of an instantaneous print as seen in fiction in the replicators of the Star Trek universe: The team's current implementation takes upwards of 15 minutes to print a single, tiny object at a scale which requires microscopic examination. 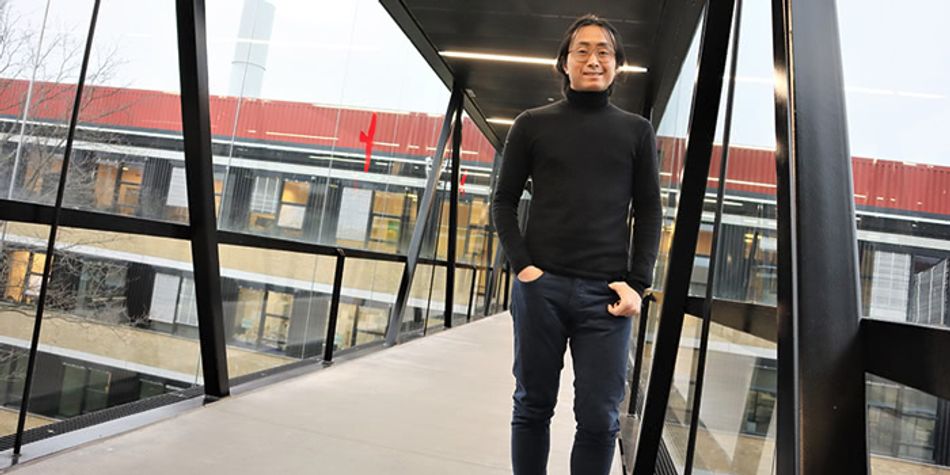 Assistant Professor Yi Yang claims the printer could produce objects "the moment after" a request is made.

The team has at least proven that its printer is capable of creating objects with customized mechanical properties at the level of a single voxel, a three-dimensional equivalent of a 2D display's pixel: Test objects which did not experience excessive cross-contamination between the light sources measured at around 50 megaPascals (MPa) where designed to be soft and a considerably higher 300MPa where designed to be hard, while a continuous fully-graded sheet went from 50MPa at its softest to 650MPa at its hardest.

The team's paper, "Stiffness control in dual color tomographic volumetric 3D printing," has been published in the journal Nature under open-access terms.

Imagine you could create thousands of options for a single design the push of a button and then you just pick the best option! Generative design makes this possible.