A collaborative effort has installed electronic “brains” on solar-powered robots that are 100 to 250 micrometers in size – smaller than an ant’s head – so that they can walk autonomously without being externally controlled.

Cornell researchers installed electronic “brains” on solar-powered robots that are 100 to 250 micrometers in size, so the tiny bots can walk autonomously without being externally controlled. Noël Heaney/Cornell University

While Cornell researchers and others have previously developed microscopic machines that can crawl, swim, walk and fold themselves up, there were always “strings” attached; to generate motion, wires were used to provide electrical current or laser beams had to be focused directly onto specific locations on the robots.

“Before, we literally had to manipulate these ‘strings’ in order to get any kind of response from the robot,” said Itai Cohen, professor of physics in the College of Arts and Sciences. “But now that we have these brains on board, it’s like taking the strings off the marionette. It’s like when Pinocchio gains consciousness.”

The innovation sets the stage for a new generation of microscopic devices that can track bacteria, sniff out chemicals, destroy pollutants, conduct microsurgery and scrub the plaque out of arteries.

The project brought together researchers from the labs of Cohen, Alyosha Molnar, associate professor of electrical and computer engineering in Cornell Engineering; and Paul McEuen, the John A. Newman Professor of Physical Science (A&S), all co-senior authors on the paper.

The “brain” in the new robots is a complementary metal-oxide-semiconductor (CMOS) clock circuit that contains a thousand transistors, plus an array of diodes, resistors and capacitors. The integrated CMOS circuit generates a signal that produces a series of phase-shifted square wave frequencies that in turn set the gait of the robot. The robot legs are platinum-based actuators. Both the circuit and the legs are powered by photovoltaics. 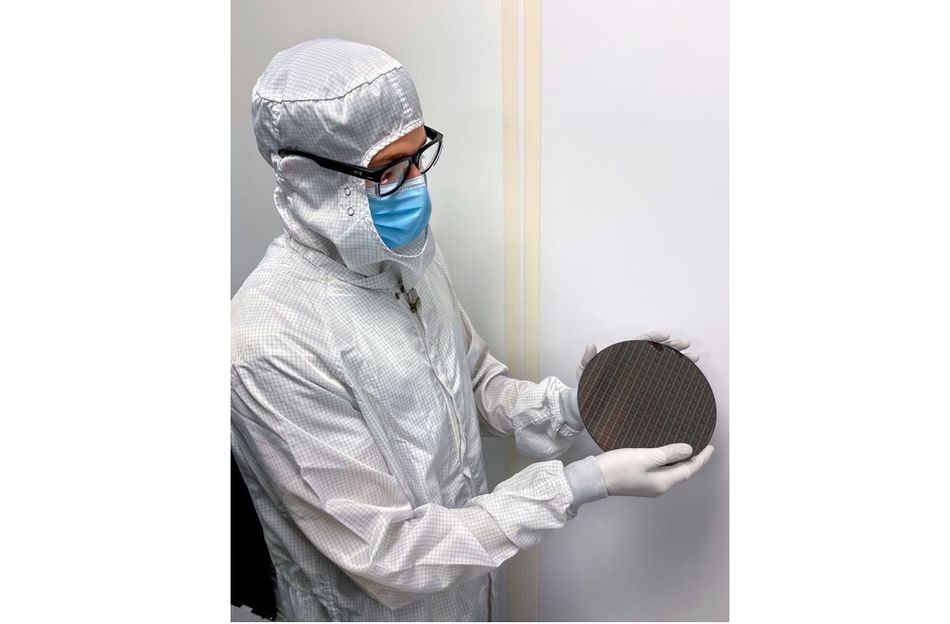 “In some sense, the electronics are very basic. This clock circuit is not a leap forward in the ability of circuits,” Cohen said. “But all of the electronics have to be designed to be very low power, so that we didn’t have to put humungous photovoltaics to power the circuit.”

The low-power electronics were made possible by the Molnar Group’s research. Former postdoctoral researcher Alejandro Cortese, Ph.D. ‘19, worked with Reynolds and designed the CMOS brain, which was then built by a commercial foundry, XFAB.

The finished circuits arrived on 8-inch silicon-on-insulator wafers. At 15 microns tall, each robot brain – essentially also the robot’s body – was a “mountain” compared to the electronics that normally fit on a flat wafer, Reynolds said. He worked with the Cornell NanoScale Science and Technology Facility (CNF) to develop an intricate process using 13 layers of photolithography to etch the brains loose into an aqueous solution and pattern the actuators to make the legs.

“One of the key parts that enables this is that we’re using microscale actuators that can be controlled by low voltages and currents,” said Cortese, who is CEO of OWiC Technologies, a company he founded with McEuen and Molnar to commercialize optical wireless integrated circuits for microsensors. “This is really the first time that we showed that yes, you can integrate that directly into a CMOS process and have all of those legs be directly controlled by effectively one circuit.”

The team created three robots to demonstrate the CMOS integration: a two-legged Purcell bot, named in tribute to physicist Edward Purcell, who proposed a similarly simple model to explain the swimming motions of microorganisms; a more complicated six-legged antbot, which walks with an alternating tripod gait, like that of an insect; and a four-legged dogbot that can vary the speed with which it walks thanks to a modified circuit that receives commands via laser pulse.

“Eventually, the ability to communicate a command will allow us to give the robot instructions, and the internal brain will figure out how to carry them out,” Cohen said. “Then we’re having a conversation with the robot. The robot might tell us something about its environment, and then we might react by telling it, ‘OK, go over there and try to suss out what’s happening.’”

The new robots are approximately 10,000 times smaller than macroscale robots that feature onboard CMOS electronics, and they can walk at speeds faster than 10 micrometers per second.

The fabrication process that Reynolds designed, basically customizing foundry-built electronics, has resulted in a platform that can enable other researchers to outfit microscopic robots with their own apps – from chemical detectors to photovoltaic “eyes” that help robots navigate by sensing changes in light.

“What this lets you imagine is really complex, highly functional microscopic robots that have a high degree of programmability, integrated with not only actuators, but also sensors,” Reynolds said. “We’re excited about the applications in medicine – something that could move around in tissue and identify good cells and kill bad cells – and in environmental remediation, like if you had a robot that knew how to break down pollutants or sense a dangerous chemical and get rid of it.”

In May, the team integrated their CMOS clock circuits into artificial cilia that were also built with platinum-based, electrically-powered actuators, to manipulate the movement of fluids.

“The real fun part is, just like we never really knew what the iPhone was going to be about until we sent it out into the world, what we’re hoping is that now that we’ve shown the recipe for linking CMOS electronics to robotic actuating limbs, we can unleash this and have people design low-power microchips that can do all sorts of things,” Cohen said. “That’s the idea of sending it out into the ether and letting people’s imaginations run wild.”