Besides being a product manager for robotics and autonomous vehicles at Vanderlande and a former member of the Stella Team, a research group within TU/e that develops solar-powered family cars, Liselotte Graas is a singer, a documentary creator and host

Besides being a product manager for robotics and autonomous vehicles at Vanderlande and a former member of the Stella Team, a research group within TU/e that develops solar-powered family cars, Liselotte Graas is a singer, a documentary creator and host, and is currently also working for an NGO in her spare time. With a degree in mechanical engineering, Liselotte enjoys being engaged in several projects at a time. In this interview, she talks about all these talents and skills and explains that opportunities come when we say "yes" to challenges.

Have you always wanted to pursue a career in technology?

When I was younger, I thought it was one or the other: you're either a tech person, or you're a creative person. As my mother always says, I used to save the math homework for later to savor it as a dessert. But I couldn't see myself having a career in technology because I was always messing around with painting, making clothes, and exploring music. Fun fact: I also made newspapers for the people in my street! I just enjoyed trying everything out. My parents stimulated me to pursue the mathematical approach. At that time, I thought that was not the most logical choice to make as a girl. But my father taught me that it is sometimes better to choose the unusual path and be rewarded by a surprising outcome.

How did you get involved in the Stella Project?

One day, this person came by the university's computer repair shop, where I worked, and told me about the Solar Team. I was in doubt at first. But after some consideration and discussions with the people closest to me, I realized what a great opportunity that was. We were a team of super enthusiastic people with a higher goal, with a vision, and with such a short timeframe to accomplish that. The project lasted for one and a half years, during which I paused my studies. I was the only girl in a team with 22 guys. In the beginning, I was a bit skeptical, but the absence of a "girls Island" and a "boys island" was fantastic. After that, I went back to do my master's degree in manufacturing systems engineering. The Solar Team was one of the most intense but also most enriching experiences that I have ever had. I'm delighted that I had the opportunity to do that. 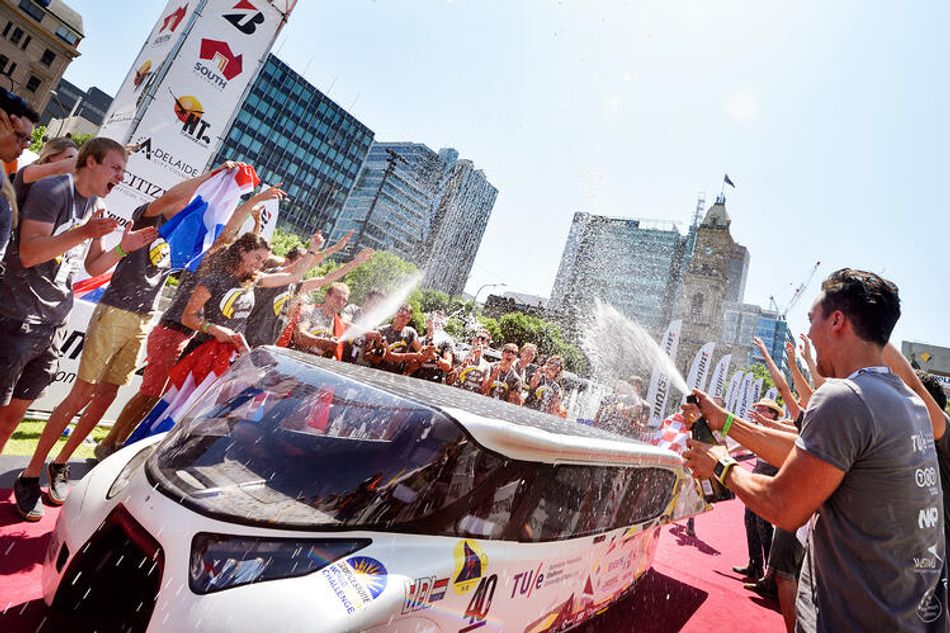 Tell us about your experience in the Bridgestone World Solar Challenge in Australia.

We had been working on the car for a year when we went to Australia, and we stayed for about three months. For me, it was phenomenal to see the car development, from the sketches, all the way to seeing it up and running, and then also have the honor to drive it across the outback! When we crossed the finish line, we sort of knew we had won. There had to be an additional ranking the next day, but we had had a fantastic time lap. I remember the moment they announced it: I think I have never been so happy in my entire life!

We were the second group in the project, and the first year's team had already won the award, so we had big shoes to fill. Our group got updated regulations that suggested a two-person car. We were convinced we would win the challenge if we followed those, thanks to the previous team's expertise. But our vision was to focus on the family car, the car of the future. There was a whole debate over whereas we should go for the security of winning the race versus embracing our vision. We opted for the latter. Giving up on that certainty was a tough decision. But that was the choice that provided us with the most significant learning opportunities, which is so fundamental.

In the end, we won the race with the concept we believed in. That added another layer of satisfaction to the win.

Later, you made a documentary about your Stella team. Why? And how was this for you?

That was amazing. I simply called someone and said: "Hey, I have an idea. What about this?" We came up with the idea that I would visit my former Stella colleagues. I knew they all had ended up in exciting and diverse positions, so it would be great to register that. In the original plan, I would be visiting one of my colleagues who worked abroad. However, after I pitched the idea at TU/e, that concept escalated because they were super enthusiastic. They said: "This is such a great idea! But aren't there more people all over the world?" So I rewrote the plan, and about one month later, I was on a plane to Manchester to do the first visit! I had a full-time job. So, thankfully, my boss and everyone at Vanderlande were very supportive. As such, they gave me extra holidays to work on the project. 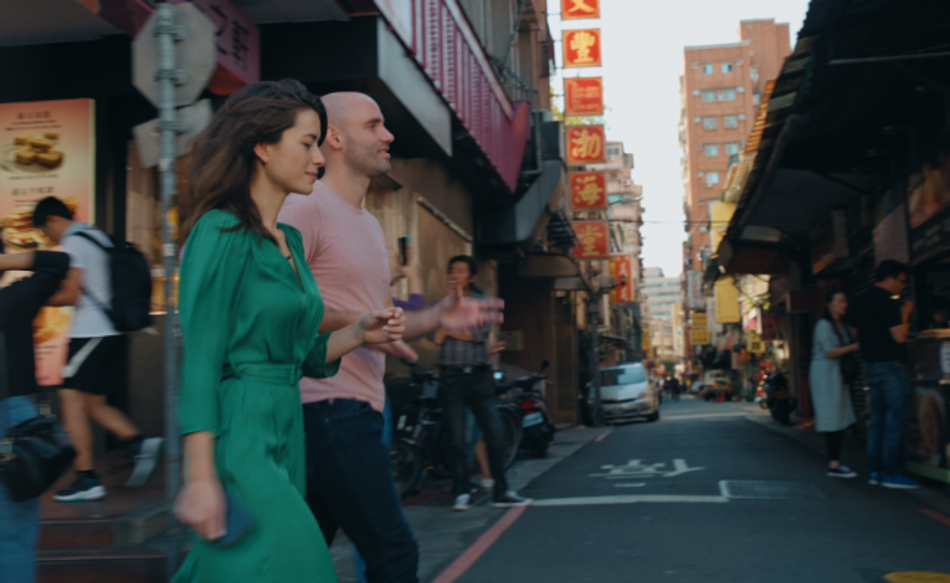 How is it for you to be a woman in a male-dominated field?

This is always an interesting question. The truth is: I don't really experience hurdles there. I know it is a huge, relevant topic. But I think that I have always been good at blending in male-dominated spaces - I had to. As I said, I was the only female in the Solar Team and, during my studies, I was one of the very few girls in my course.
Obviously, I have lived situations where I felt like people would look down on me because I am a woman. But I never saw it as a hurting thing. Of course, some of these episodes made me questions myself. However, in a way, it lights my fire. For example, when I started my bachelor's, there were about five or six girls and around 150 boys, so it was remarkably imbalanced. And I remember them placing bets about beer cradles on how long we would last in the course. "She will quit in three months," one of them said, referring to me. When I heard that, it didn't hurt me. I thought: "Challenge accepted."

At Vanderlande, I was given the opportunity to be a product manager, which is quite challenging. But, still, it's in my nature to say "yes" to challenges. When I look at the company I work for, I think the same position could have been offered to a man because it is not about gender, but it is about competence. If you're in an environment that recognizes your talents, that doesn't matter. So, I think we should applaud the institutions where gender equality is the rule, but never accept the places where this is not. And, for the latter, it is really their loss.

You mentioned your creative side. Where does this come from?

There was always a lot of music in the house. My father went to a conservatorium. So I was raised with music lessons, and I have always had a positive, intimate relationship with music. I started singing in a choir, and then I moved to singing solo - I was 16 or something on my first performance and nervous to death. I remember shaking all the way and thinking, "All these people can hear me now!" I believe it helped me grow as a person because it taught me not to be afraid to be exposed in such a way. 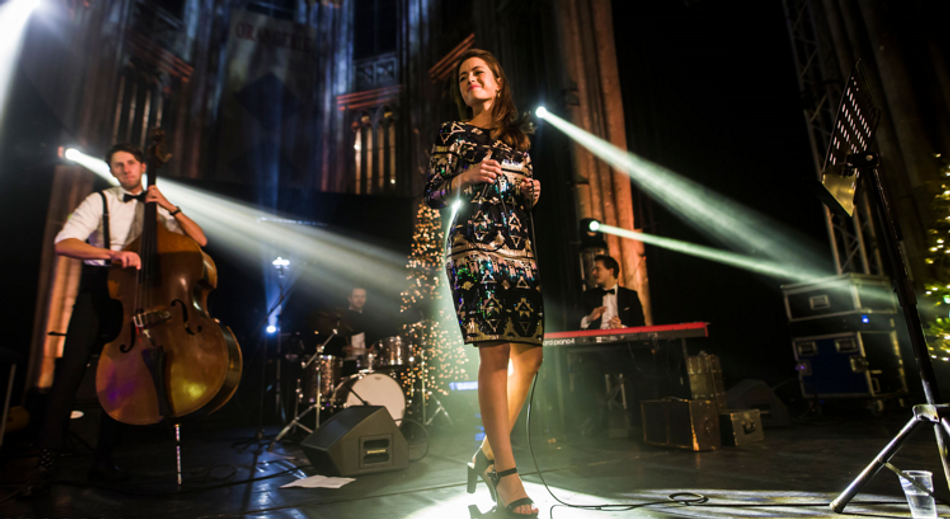 So much so that, in the Solar Team, I was one of the spokespersons: besides being one of the drivers, I also did the car presentation, which was quite a big responsibility. Curiously, I enjoyed that, and I think that also came from the fact that I was already used to presenting myself in front of a demanding audience.

Do you have any piece of advice for other young females who would like to pursue a career in the technology fields?

For me, there are at least two things. One is to work with what inspires you. For example, the fact that I saved my math activities as dessert-like should have given me a clear idea that that was the path to pursue. Nevertheless, I still needed a notch to get there. But I think it is essential that you learn at a young age to work from inspiration, meaning work that is different from working from a strategic point of view.

The other thing - and I know it might sound cheesy, but it's true - is that when you know you are facing something you want to go for, do not overthink it: just start somewhere. For me, the documentaries began with only one phone call, with a minor step.

Furthermore, I think that opportunities arrive when we dare to say "yes" to the chances that we are given. Also, think about how you can create opportunities for yourself: if things do not happen, try to make them happen for you.

Our very own aerodynamic engineer, Annemiek Koers, answers a few questions about what makes Lightyear One special.

One of Lightyear One's secrets is its in-wheel motor. The most important aspect is the perfect balance between efficiency, weight, and torque.

Explore with our colleagues Davy Bijnen (System Architect) and Bart Kramer (Mechatronics Engineer) what a Hardware Integration Test is, and what role it plays in the creation of Lightyear One.