This human mimetic robot that provides a high degree of anatomical fidelity to the human structure and is capable of whole-body motions.

To cool the system the robot has a passive technique, allowing water to seep out through the frame around the motors to cool them evaporatively. With all the motors Kengoro has, there was no room for a cooling system, but this solution solved the problem that many humanoid robots encounter. Kengoro can run for half a day on a cup of deionized water, as just like humans it needs to keep hydrated.

To develop a humanoid with human body proportions, the use of statistical data is important. Similar studies were conducted for the development of the HRP4 and HRP4-C humanoids. In our case, the design priority was to achieve bone lengths and limb shapes similar to those of humans. With this priority in mind, the components, muscle actuators, skeletal structure, and electrical components were designed and placed by trial and error. 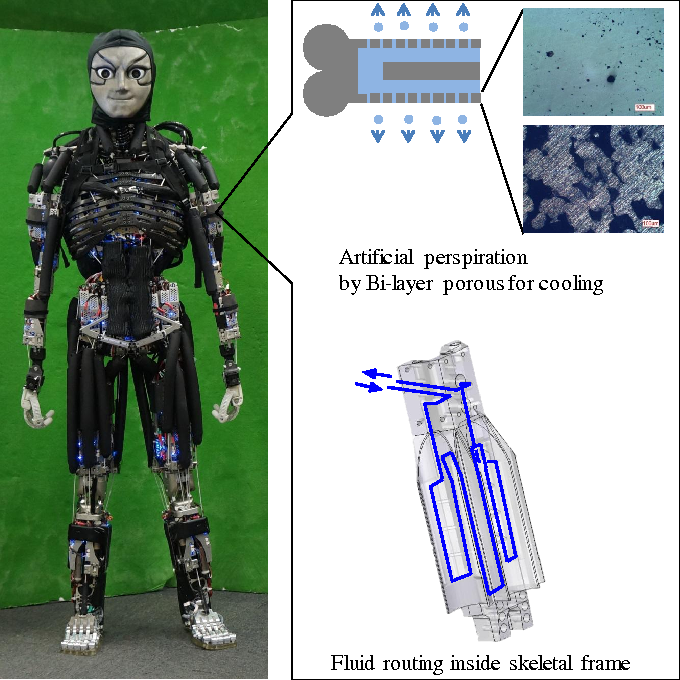 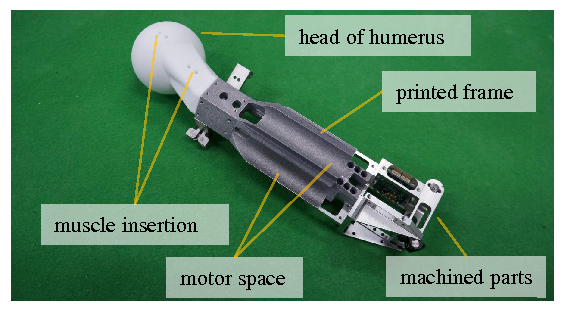 **Figure 2: **Overview of developed humerus. The white part represents the head of humerus that enables adhesion of muscles and bones. Printed aluminum has Bi-layer porous structure that enables 3 motors for deltoid to cool by latent heat.

A limitation of conventional humanoids is that they have been designed on the basis of the theories of conventional engineering, mechanics, electronics, and informatics. By contrast, our intent is to design a humanoid based on human systems to support science-oriented goals, such as gaining a deeper understanding of the internal mechanisms of humans, for instance, to quantitatively analyze the internal data of a human body in movement.

Human statistical data was used to create accurate humanoid proportions, both in terms of mass distribution and in the size of each body part. Furthermore, the skeletal structure and tendon-driven actuator systems mimic the connections made by muscles and tendons in the human body. Kengoro has 174 degrees of freedom, if you include all the joints in its hands.

The possibility that a musculoskeletal humanoid can be used in medicine, such as to grow tissue grafts has been suggested. If a humanoid can replicate human movements, then the resulting muscle contribution analysis or sensory data obtained during motion may also benefit athletes or sports trainers.

Overview and concept of the developed humanoid Kengoro and explains characteristics of skeletal structures. Muscle structure and control system are explained. Demonstrations of several preliminary movements by Kengoro to show its performances. Lastly the conclusion and future work is presented.

Describes studies of human foot structure for a human mimetic foot development and the hardware structure and muscle arrangement of the developed foot. Describes the balancing strategy utilizing the developed foot and demonstrates several experiments to show the performance of the foot. Also present

Industry 4.0 is changing the traditional way that manufacturing and production are accomplished, and a positive turn towards clean energy means that more and better air-driven components are available.

Miniature biological robots are making greater strides than ever, thanks to the spinal cord directing their steps.