The BionicCobot is based on the human arm not only in terms of its anatomical construction. Like its biological role model, the pneumatic lightweight robot solves many of its tasks with the help of flexible and sensitive movements. Due to this flexibility, it can work directly and safely together with humans.

Whether it is gripping powerfully or lifting carefully, pressing firmly or touching gently – for us humans to be able to execute a movement, the interaction of counteracting muscles is always necessary. The developers have technically implemented this principle of agonist (player) and antagonist (opponent) on the BionicCobot in all seven joints.

There are three axes in its shoulder area, one each in the elbow and lower arm plus two axes in the wrist. In each axis there is a rotary vane with two air chambers. These form a pair of drives, which can be infinitely adjusted like a mechanical spring by filling them with compressed air. 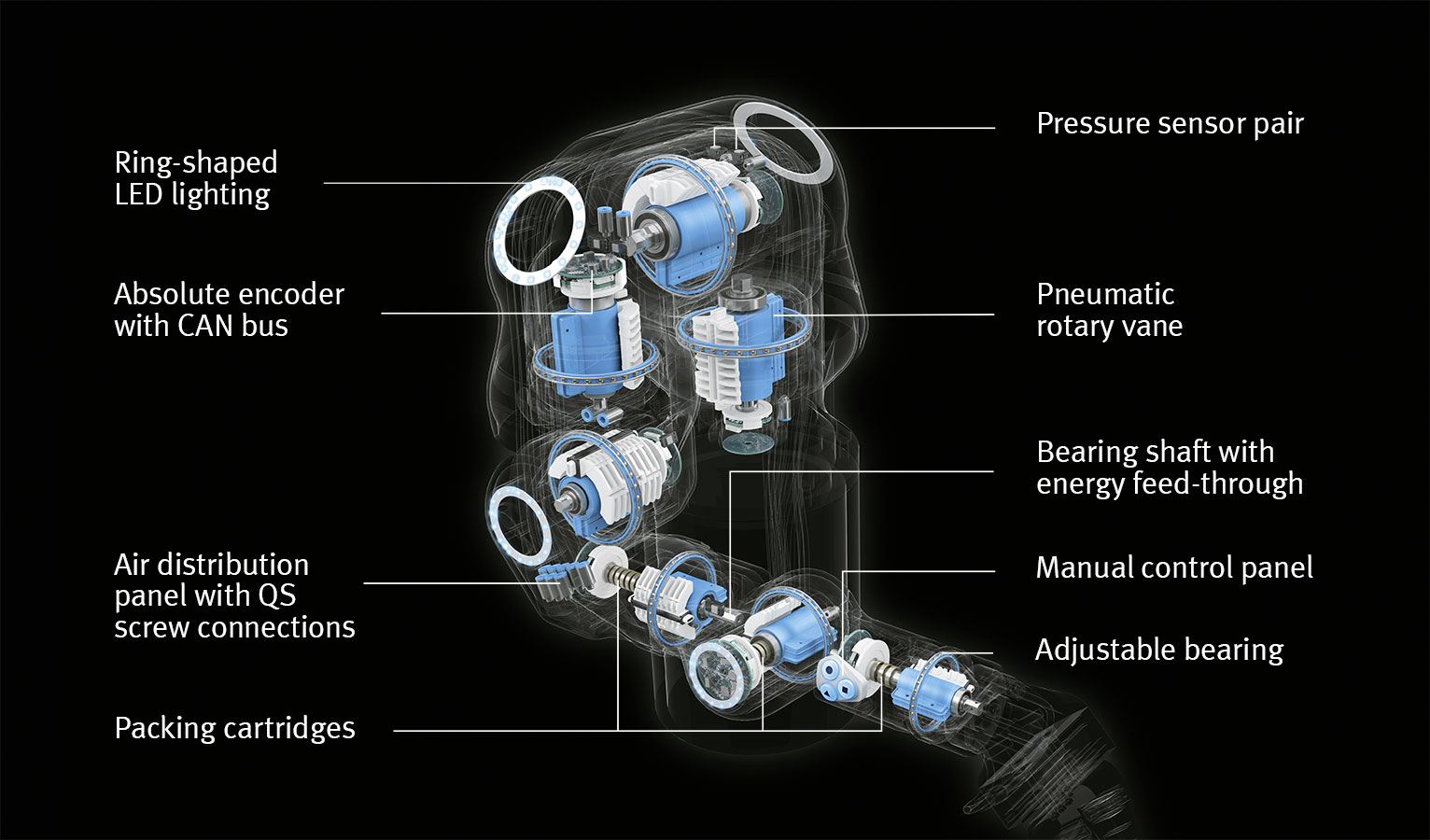 The unique drive concept allows the force potential and hence also the rigidity level of the robot arm to be exactly determined. In the event of a collision, the pneumatic arm automatically eases off and do not pose any danger to humans. This inherent flexibility of the system and the low tare weight allow it to be used without a protective cage, thus making an immediate and safe collaboration between human and machine possible.

The BionicCobot is operated intuitively by means of a graphic user interface developed in house. With a tablet, the user can quite easily teach the actions to be performed and order them in any sequence. By means of the ROS (Robot Operating System) open source platform, the programmed motion sequences reach the integrated Festo Motion Terminal, which steers and controls the kinematics.

Relief in the collaborative working spaces of the future

The industrial change requires a new way for humans, machines and data to interact. Besides the digital networking of entire facilities, above all robot-based automation solutions, which in future can work hand in hand with people, play a critical role in this development.

Based on its safe interaction, the natural motion sequences and its intuitive operability, the BionicCobot has great potential in a wide range of industries: especially when it comes to monotonous, mindless or even dangerous activities, it could be used as an assisting robot and relieve humans.

Folder from Festo with more details and background information about the project. Describes mode of operation and potential uses, and has more technical specifications.

The KR 3 AGILUS: Robotic grippers for Industrial Assembly in the electronics industry

The KR 3 AGILUS is an invention from KUKA's robotic production machines. Its application is for a variety of tasks including sensitive assembly in the electronics industry with high speed and precision.