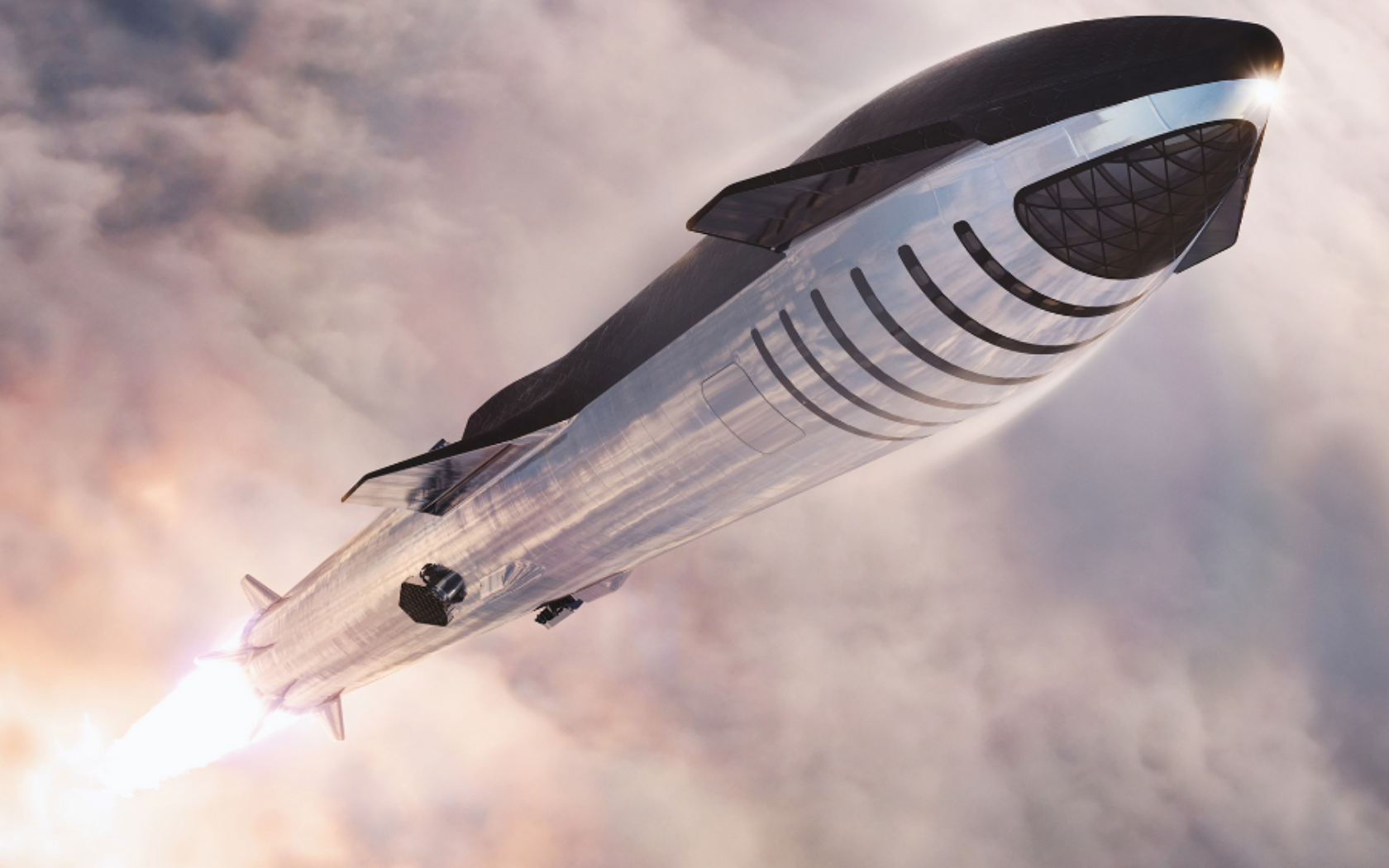 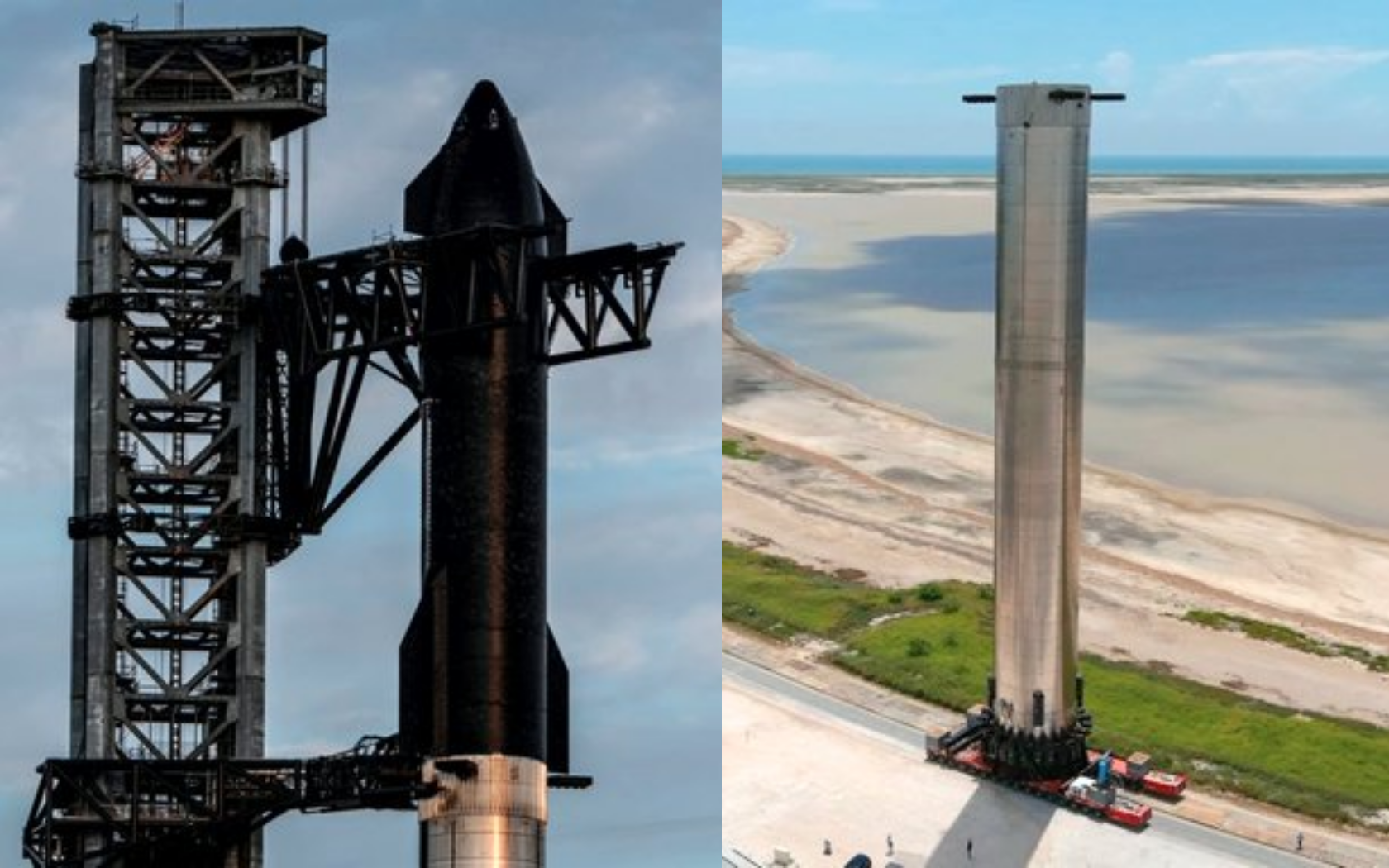 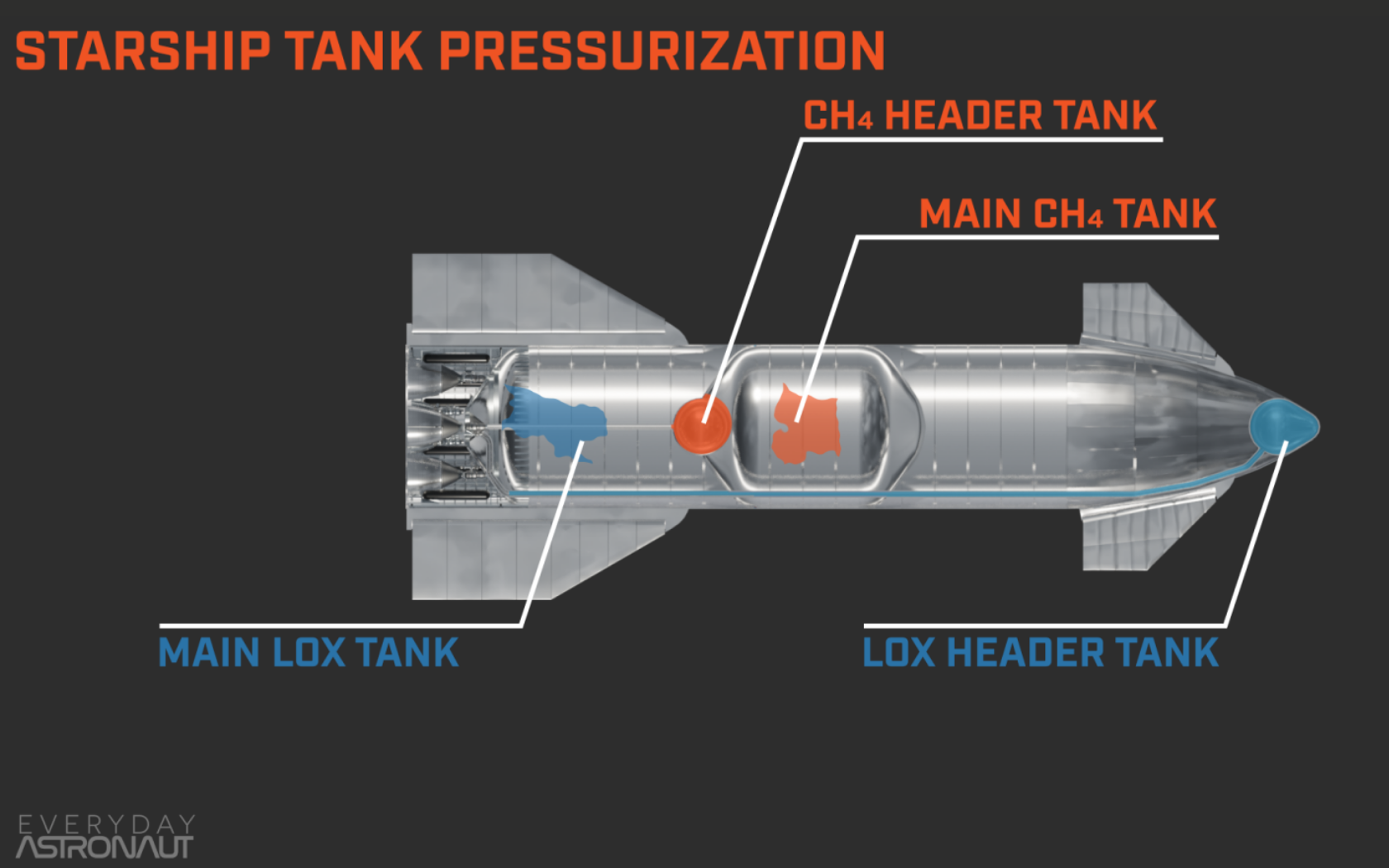 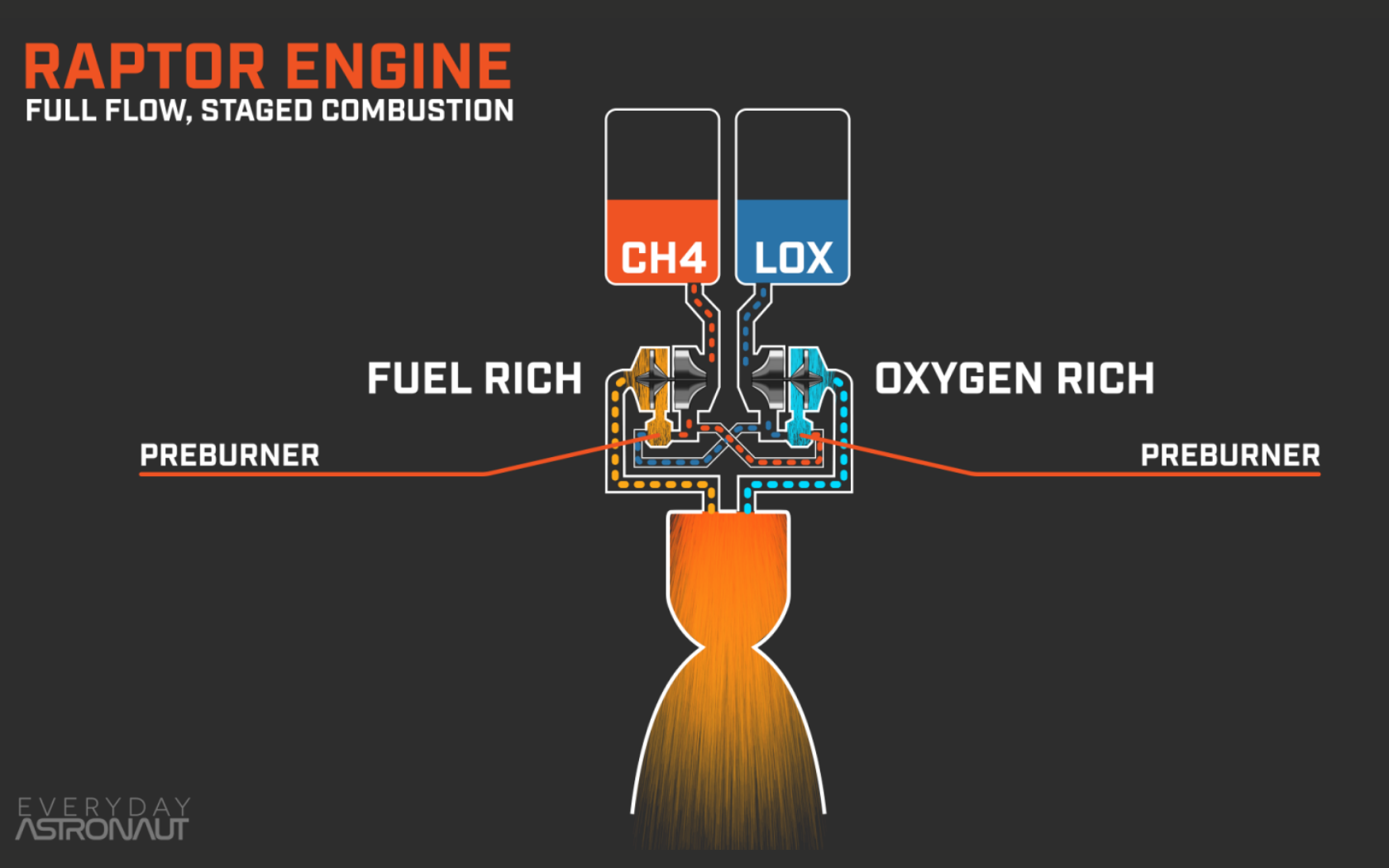 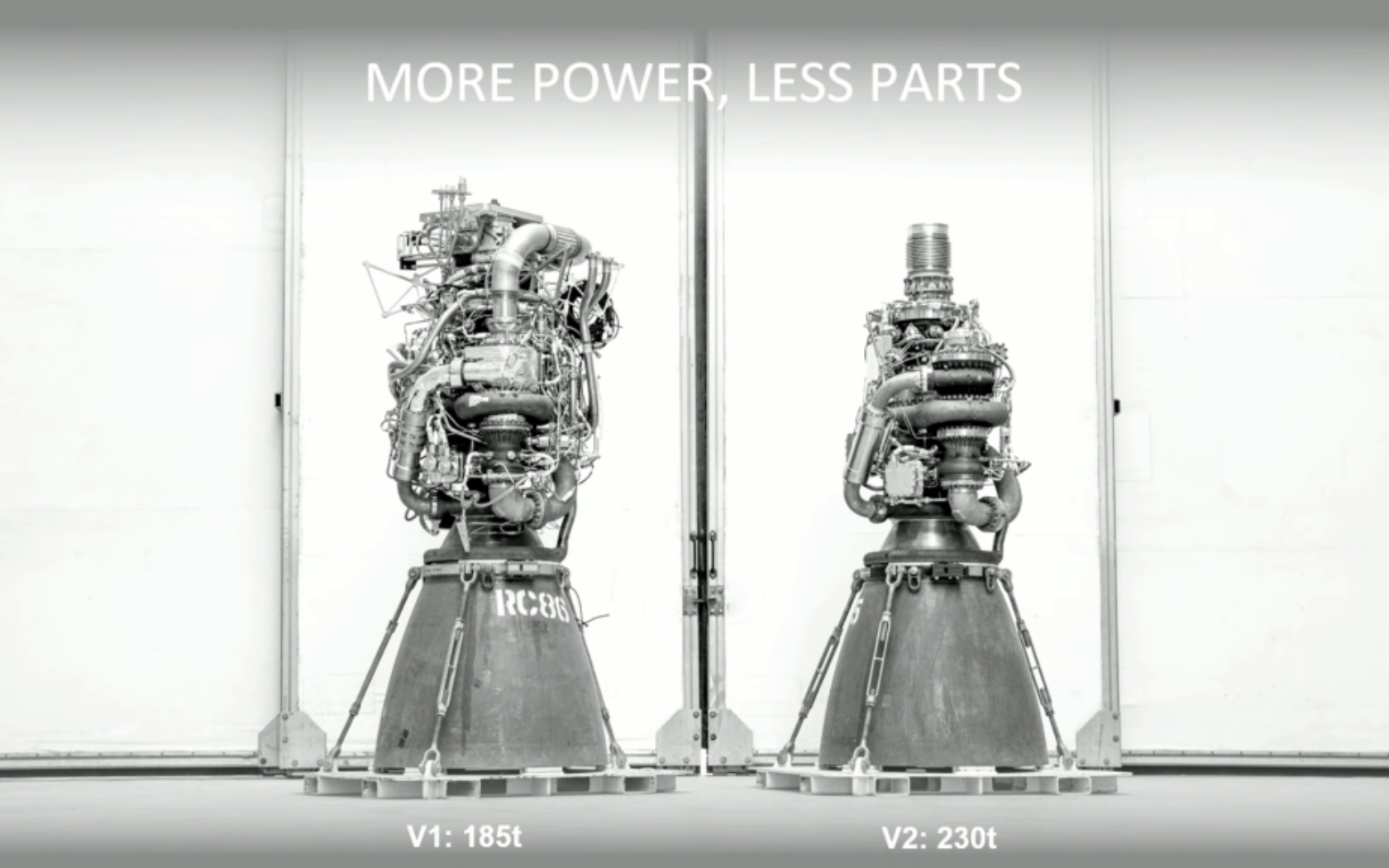 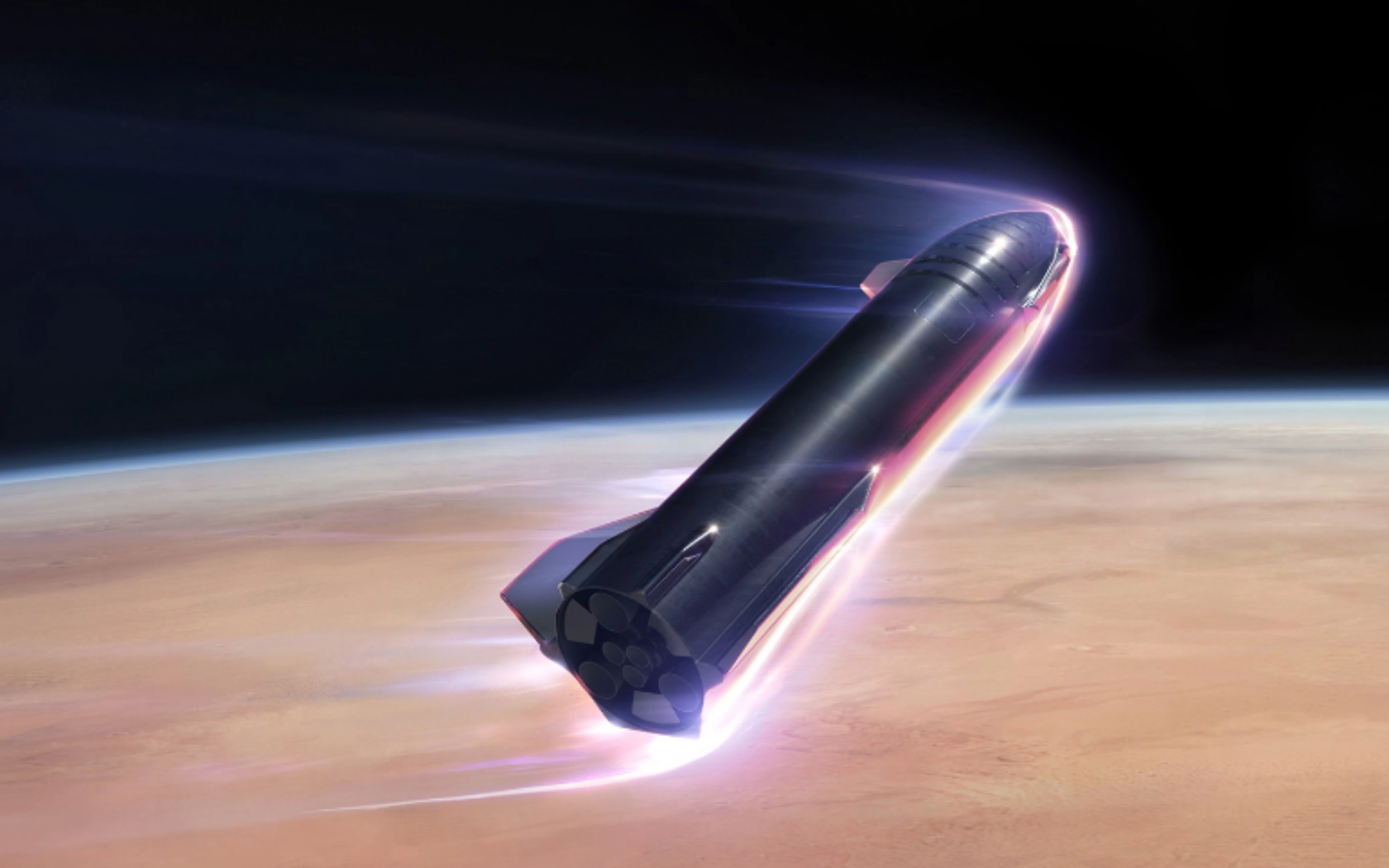 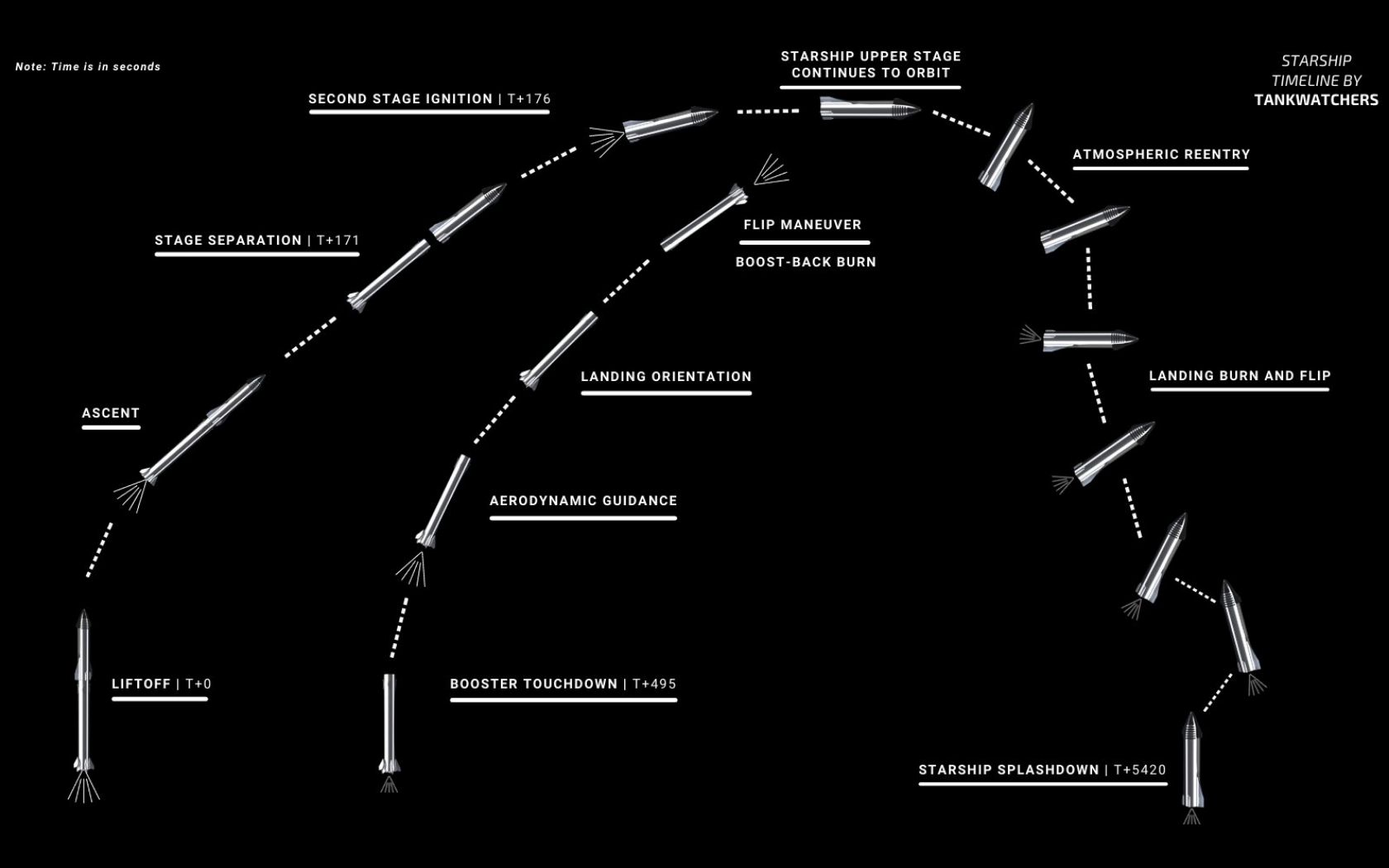 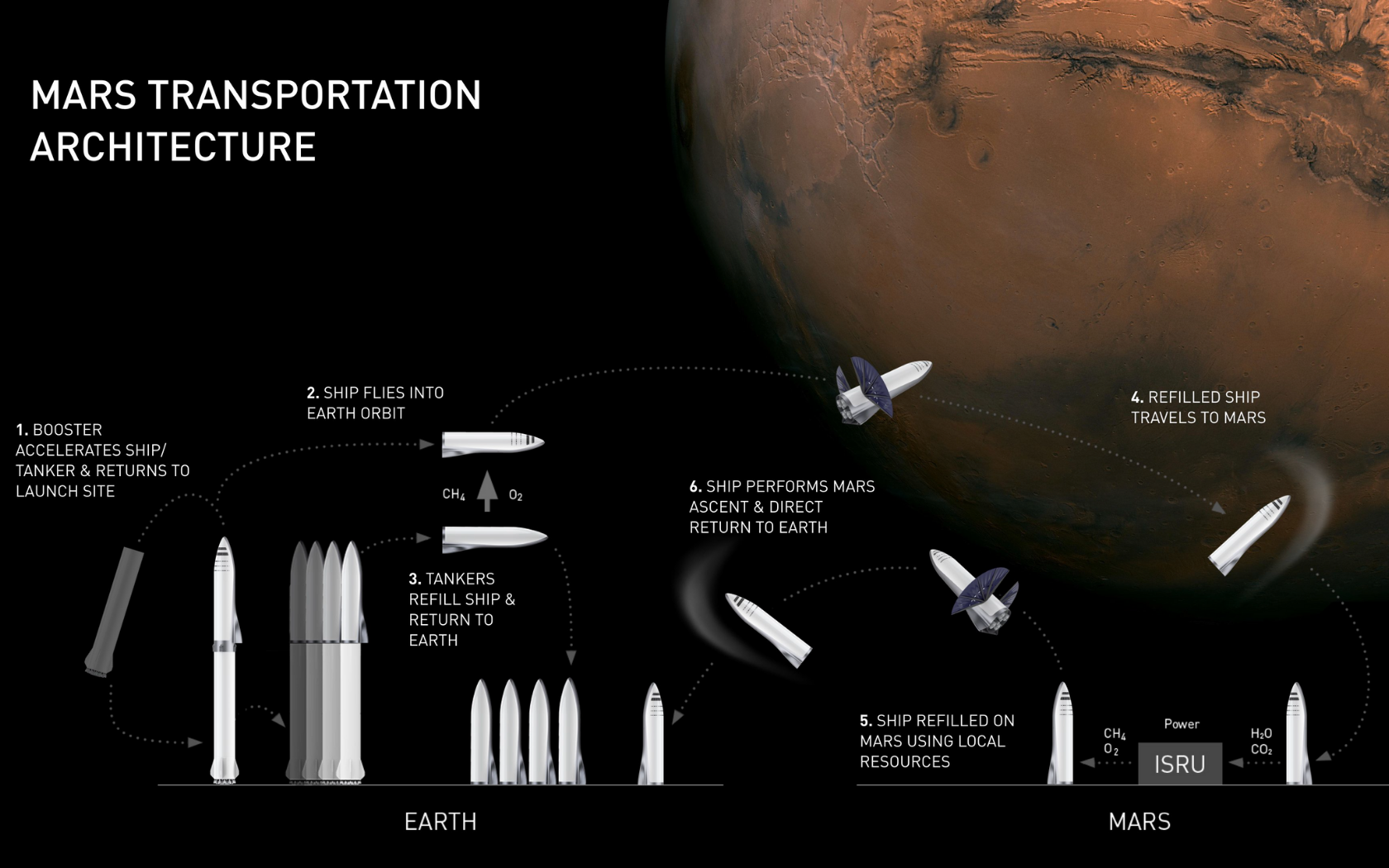 SpaceX’s Starship is an ongoing project, and available specifications are limited. All information stated here is subject to changes as the project continues. We have documented this project as factual as possible with the information at hand. If you believe that this information can be improved, please contact us.

The reusability of the Falcon launch vehicles' boosters and fairings has been successful in lowering the cost of space access. However, the current Falcon series rockets are only partially reusable and are limited to low-payload missions in Earth orbit.

The Starship rocket is specifically designed for complete reusability of both the Super Heavy rocket and the Starship spacecraft, as well as for a variety of missions such as delivering larger payloads into orbit, transporting both crew and/or cargo to and from the International Space Station, lunar missions, and the goal of interplanetary missions to Mars.

Upon lift-off, all 33 Raptor engines operate at full thrust. The Starship initially ascends vertically, then begins to pitch horizontally in the direction of its desired orbit. After providing the Starship with as much horizontal velocity as possible for about two minutes at 65km altitude, it separates, immediately flips over, and begins its descent back to Earth. The Super Heavy and Starship land at the Launch and Catch Tower (Stage 0), which employs mechanical arms to catch the Starship for quick repositioning. The Super Heavy executes a "boost back burn" by igniting a number of its center engines, canceling out horizontal velocity and changing their ballistic trajectory back to the landing site. At altitudes greater than 100 kilometers, Super Heavy uses its gas thrusters for maneuvers and deploys its grid fins. The Super Heavy, made entirely of stainless steel, withstands the scorching compressed air as the boosters reenter the Earth's atmosphere. This reentry technique differs from Falcon 9's reentry burn, which involves restarting its three Merlin engines to slow down. The booster is guided to the landing site by the grid fins that have been deployed. When the Super Heavy is directly above the landing site, its inner Raptor engines perform a "landing burn" to activate the landing legs.

After delivering its payload to the desired orbit or completing its mission, the Starship returns to Earth. The Starship can be refilled in orbit by a Tanker Starship for a Lunar or Mars mission. The Starship enters the atmosphere belly-first at a 60 to 70-degree angle, exposing as much of its cross-section to achieve significant aerodynamic drag. The Starship's four flaps control pitch, yaw, and roll while also maintaining stability. The Starship's stainless steel and heat shield tiles withstand atmospheric temperatures upon reentry. As the Starship approaches its terminal velocity of about 200 km/h, it executes the "belly-flop to tail-down" maneuver, which involves firing three Sea Level Raptor engines at maximum gimbal angle using header tank reserves and tucking in the rear flaps to pitch the vehicle's nose up as quickly as possible. The Starship overcorrects by swinging backwards to cancel out the horizontal velocity before straightening out and softly landing on target.

The Starship is made up of the Starship spacecraft and the Super Heavy booster rocket. Both are made of stainless steel 30X and are designed to withstand reentry atmospheric temperatures and low cryogenic temperatures. The propellant tanks are autogenously pressurized by pumping some gaseous fuel and oxidizer back into their respective tanks. This will make it easier to maintain pressure and temperature. It also eliminated the separate system for gas thrusters by using the excess ullage gas from the propellant tanks as gas thrusters for altitude control and small maneuvers.

The Starship system's first stage, or booster, is known as Super Heavy. Its primary purpose is to ascend into orbit and transport the starship's second stage. Starship’s first stage booster at sea level generates around 7,590 tons of thrust. The booster is comprised of thirty-three Raptor gimbaled engines and tanks containing high-density chilled sub-cooled liquid oxygen (LOX) and chilled liquid methane (CH4) propellant. Similar to Falcon 9, the 33 Sea Level Raptor engines are arranged in a circular pattern. The outer, inner, and center rings each have 20, 10, and 3 engines, respectively. Only the three center raptor engines are capable of gimbaling and deep throttle, which are required for soft propulsive landings. These engines also reorient the first stage before reentry and slow the vehicle down for landing on Stage 0. The outer and inner ring engines are Raptor booster variants that lack gimbal and deep throttle capability but have higher thrust to increase payload mass. The Super Heavy has two to three autonomously-guided grid fins near its top. It functions as an air brake, directing the center of pressure and causing pitch or yaw by moving opposite pairs in unison, and rolling by moving opposite pairs in unison. The current booster design includes six deployable landing legs.

The second stage is also known as the Starship. Its primary purpose is to safely transport passengers and cargo to the desired destination. The starship generates about 1500 tons-force of thrust in a vacuum. It is powered by three Raptor sea-level engines in the middle and three Raptor vacuum engines on the outer ring. The tanks contain the same amount of propellant as the first stage. The propellant tanks operate at a pressure of 5–6 bar and are double-walled to insulate the propellant from the heat of the sun. Two header tanks, each for the LOX and liquid CH4, serve as the reserves for the landing phase. This provides a constant source of propellant regardless of the rocket's orientation or G-load. The second stage engines ignite quickly after stage separation and can be restarted multiple times. The two forward and two rear flaps aid in the vehicle's control and stability as it reenters belly-first. These electric-powered flaps change their drag to control pitch, yaw, and roll. Heat shield tiles are mechanically attached to the starship's belly to provide additional protection during reentry from orbital velocity. These uniform hexagon tiles may be made of SpaceX-modified TUFROC material and provide high reusability by withstanding high peak temperatures before abating.

During the mission, the payload fairing protects and houses the crew and cargo. The Starship payload fairing measures 9 meters in diameter and 18 meters in height, with a usable volume of approximately 1,000 cubic meters. This payload volume can accommodate both crew and cargo. The Starship can transport over 150,000 kg to LEO, 21,000 kg to GTO, and 150,000 kg to GTO or even Mars with orbital refueling.

The Raptor rocket engines are specifically developed for the full reusability features of the Starship. These engines have throttle and restart capability for high degrees of control, and some engines are gimbaled. It utilizes a spark ignition for restart reliability to begin the ignition process. Similarly to the Falcon series' fail-safe system, a few Raptor engines in the Super Heavy and one Raptor engine in the Starship can fail without affecting the launch by allowing the remaining functioning engines to carry the burden. Raptor engines utilize super-chilled liquid methane (CH4) and subcooled liquid oxygen (LOX) as rocket propellants in a more complex full-flow staged combustion cycle.

It works by directing all exhaust gases into the main combustion chamber and utilizing them for additional thrust, resulting in increased efficiency. There are two preburners, each with their own turbopumps and turbines. The fuel-rich and oxygen-rich exhausts are pumped into the main combustion chamber. There’s better combustion and hotter temperatures because both the fuel and oxidizer arrive in the combustion chamber as a hot gas, which means less refurbishment time by reducing the need for complex seals. The increased propellant flow into the preburners drives turbopumps with low fuel-to-oxidizer ratios, allowing the turbines to operate at lower temperatures and pressures. Unlike the gas-generator cycle, which uses less propellant but raises the temperature to achieve the same result. The full flow staged combustion cycle design extends the assembly's lifespan while also increasing efficiency because most combustion occurs in the combustion chamber rather than the preburner.

Methane was chosen as the starship's fuel for a variety of reasons. One of these is that methane as a fuel produces almost no soot, reducing inspection and refurbishment time significantly. Methane can also be produced on the red planet's surface using in-situ resource utilization (ISRU), increasing its utility in Mars colonization. However, because methane is less dense than RP-1, a slightly larger tank volume is required. The liquid methane is chilled to -180 °C, while the liquid oxygen is chilled to -207 °C. The proximity of these temperatures simplifies tank design for both fuel and oxidizer. A volume of 1.0L of liquid oxygen is needed to burn 0.73L of methane with the oxidizer-to-fuel ratio of 3.7:1.

The current Raptor V2 engines are slimmer, more compact, and smaller than the Raptor V1 engines, but they produce more power. It can currently generate approximately 230 ton-force or 2,046 kilonewtons of thrust, with a goal of achieving 250 ton-force, a specific impulse of 325 seconds at sea level and 350 seconds in vacuum, and a chamber pressure of 330-350 bar. Although the Raptor engine's current thrust-to-weight ratio of 130:1 is nowhere near the Merlin engine's 200:1 ratio, improvements are being made to potentially match their numbers. However, unlike the Merlin engine, the Raptor engine fits within its own footprint of about 1.33m2, allowing for more Raptor engines to be placed in a smaller area. The cooling process for the combustion chamber and expansion nozzle has not been reported yet, but regenerative cooling and radiative cooling might not be impossible.