Article 7 of our 5G Series: 5G antenna design is critical to its broader success.

This is the seventh article in an eight-part series exploring 5G. The series will explain key terms and technologies and provide an overview of current and future applications for 5G connectivity.

The articles were originally published in an e-magazine, and have been substantially edited by Wevolver to update them and make them available on the Wevolver platform. This series is sponsored by Mouser, an online distributor of electronic components. Through their sponsorship, Mouser Electronics supports a more connected future fuelled by knowledge and innovation.

Although 5G wireless requires more complex signal processing and the ability to handle much higher data rates than previous protocols, one of the keys to its success is antenna design. This article reviews how 5G use cases and the 5G specification are changing antenna designs and how these new designs are overcoming some of the greatest difficulties in implementing 5G networks.

The 5G NR Specification and What It Means for Antenna Design

5G was conceived as a specification to deliver the following capabilities:

Meeting these mandates requires a new spectrum. 5G wireless has been assigned a new spectrum in low and mid bands (up to 6 gigahertz [GHz]) and in high bands (with millimeter wavelengths above 24GHz). One challenge for 5G antenna designs is that some devices need to operate in multiple bands. Another is that millimeter wavelengths transmitted at cellular network power levels are subject to higher absorption by buildings, vegetation, and raindrops than low and mid bands. This limits millimeter wavelength communications to line of sight, which necessitates small cell networks that can increase chances of edge interference between cells.

There are also antenna size considerations. Although higher frequencies allow smaller antennas to achieve the same level of gain, smaller antenna areas capture less energy, resulting in a shorter effective range than lower frequencies. On the other hand, an antenna with a fixed physical area increases gains for both transmissions and receptions as a frequency increases and beam width shrinks. The optimum antenna size for different implementations will balance size versus gain tradeoffs.

To operate in its full range of assigned frequencies, 5G NR uses a scalable framework that functions at frequencies between 450 megahertz (MHz) and 6GHz (frequency range 1 [FR1]) and between 24.25 and 52.6GHz (frequency range 2 [FR2]). 5G NR does this by using scalable orthogonal frequency-division multiplexing (ODFM) waveforms that allow different subcarrier signal spacing to fit the various channel widths that different frequency ranges provide. Higher frequencies provide wider channels and greater subcarrier spacing. Lower frequencies use smaller channel widths and narrower subcarrier spacing. Scaling subcarrier spacing to available channel widths enables the 5G framework to operate across a broad range of frequencies. The result makes it possible to deploy 5G in existing 4G Long-Term Evolution (LTE) networks. It also makes it possible for 5G communications systems to switch between low- and high-frequency bands based on use cases or workload requirements.

The challenge for antenna designers is physics. A 1GHz signal, which is in FR1, has a wavelength of about 30 centimeters (cm). A 28GHz signal in FR2 has a wavelength of 1.07mm. The same antenna will not work for these two signals, so 5G devices operating in both FR1 and FR2 bands will require at least two sets of antennas. This is manageable in large equipment and base stations that have room for multiple antenna arrays. It becomes a significant design challenge for small devices and cell phones.

One challenge presented by the 5G specification is the need to support much higher densities of connected devices that are operating simultaneously at much higher data rates. This will require higher cell densities and more extensive use of the multiple-input, multiple-output (MIMO) antenna technologies already in use in 4G LTE networks. MIMO is an antenna array of multiple transmitting and receiving antennas (which in current LTE networks, often contains an 8 x 8 antenna array). MIMO uses spatial multiplexing to break a signal into encoded streams that it simultaneously transmits through different antennas in the array. Both the transmitting and receiving devices have multiple antennas and signal processing for encoding and decoding multiplexed signals. This makes it possible to:

Many variations of MIMO exist. A key variation for 5G is massive MIMO (mMIMO), an antenna design that packs many more antenna elements into a dense array than previous MIMO versions. Lower-frequency antennas are larger, which creates practical limits to how many antenna elements will fit in a reasonably sized low-frequency MIMO array. Millimeter wavelengths work with much smaller antennas, which makes it possible to build mMIMO arrays in small packages. Some manufacturers are building mMIMO antennas that contain 128 elements. By increasing the number of data streams, mMIMO increases signal capacity without requiring more spectrum, which in turn increases data rates and link reliability.

Beamforming is a method of shaping a transmission to create a well-defined antenna pattern targeted at a specific receiving antenna. It is done by adjusting phase and amplitude transmissions through different antenna elements in an array of equally spaced antennas. Beamforming can be used to reduce interference, and it also increases range by concentrating beam energy. Initial 5G deployments using midband frequencies will employ 4 x 4 or 8 x 8 MIMO antennas set up to enable beamforming, similar to what is currently available in LTE. High frequency (millimeter wavelength) 5G deployments will take advantage of adaptive arrays using larger mMIMO antennas with many more antenna elements and capable of tighter beamforming and real-time steering.

5G beamforming depends on a transmitting device’s determination of the optimum signal path to its receiver. The transmitter does this by analyzing the sounding reference signals (SRSs) sent between the transmitter and the receiver, and then evaluating these signals to establish the channel state. Based on channel state information (CSI), the transmitter applies beamforming algorithms that transmit shaped radio patterns in the optimum direction and during the best schedule for the best reception. Beamforming will bounce transmissions off buildings if that is the optimum path to a receiver. In an environment where many devices use the same mMIMO channels, algorithms will time data packets to avoid packet collisions, minimizing signal interference. 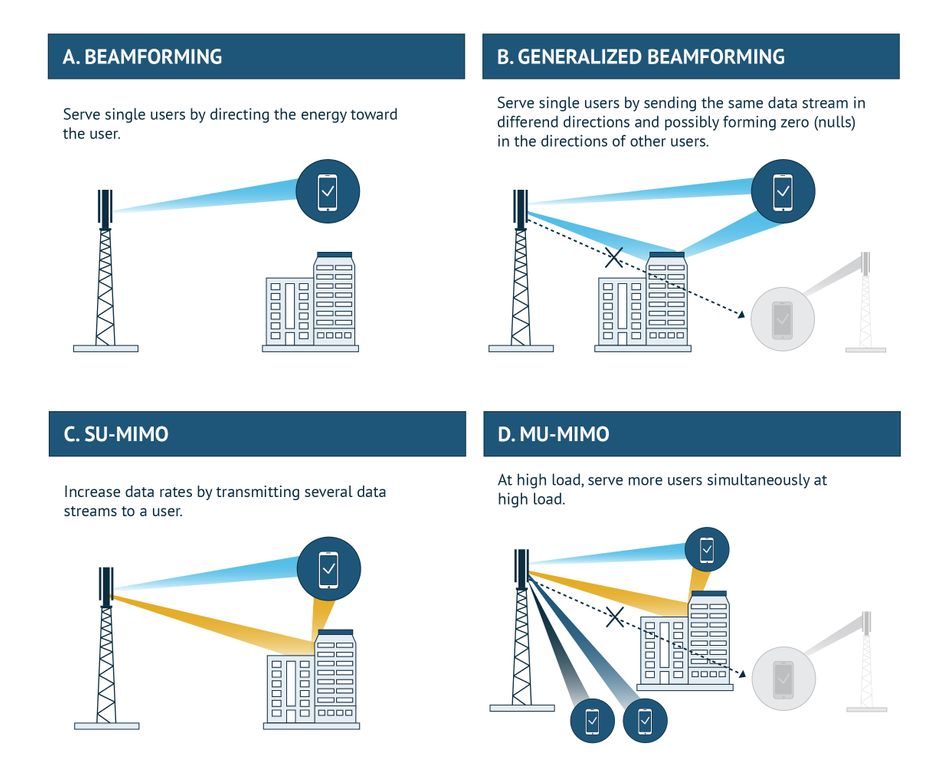 The 5G specification facilitates a maximum downlink data rate that is twice the uplink data rate in given use cases. In current deployment phases below 2.6GHz, 5G requires at least a 4 x 4 downlink MIMO and recommends at least a 2 x 2 uplink MIMO.

Antenna Designs for Different Use Cases

5G deployments will require many antenna packages for indoor and outdoor use, small cell and macro-coverage, and many different kinds of terminal equipment. The following are some 5G antenna design considerations based on several common deployment cases.

Eventually, different frequency ranges will be used for different implementations. For example, some outdoor coverage in 700MHz-range macro and small-cell implementations will operate in the 3 to 5GHz range. High-bandwidth indoor and outdoor applications will likely take advantage of micro-cell architectures that use distributed antenna systems. As this higher frequency 5G rolls out, mMIMO arrays with many antenna elements will help reduce network congestion and increase base station capacity.

Data, communication requirements, operational frequencies, and equipment design will dictate antenna designs in different 5G applications. There are many uses for 5G connected sensors and control equipment, especially in manufacturing, infrastructure monitoring and control, agriculture, and fixed wireless Internet access, to replace cable connections. Sensors and controllers optimized for low-data rates and low latencies will need to operate at specific frequencies. Fixed wireless Internet access is likely to use a combination of sub-6GHz frequencies for control plane signals and millimeter wavelengths that deliver high throughput and low latencies for end-user equipment. Other applications, such as autonomous vehicles, will have more complex requirements involving vehicle-to-anything (V2X) communications, which include low-latency control functions and high bandwidth requirements. Vehicles offer flexibility for embedding antenna arrays into the bodies of the vehicles themselves.

Cell phones are already packed with antennas, so adding antennas to support the full range of 5G frequencies will be a challenge. These phones also have limited real estate, but they will need MIMO antennas for high-level performance and antennas located on the phones’ edges and corners that support beamforming, specifically to compensate for objects that block millimeter waves (mmWaves), like a user’s hand.

The Challenges of 5G Antenna Design

5G antennas have a key role to play in making 5G communications work, but they present engineering challenges. Antenna designers typically begin with antenna simulation software that, given certain assumptions, can project signal fields. But, this is only a first step.

A significant challenge in 5G antenna designs is antenna testing. 5G antennas are not static, omnidirectional devices. They are active, and they beam their transmissions to specific devices. Putting a 5G antenna in a test room and applying a static test does not show how it will perform when it is simultaneously communicating with a thousand moving devices in a noisy RF environment. Most antenna designers are not sure of the most effective means to test or validate performance for devices that use mMIMO arrays. Testing methods will likely involve scenario-based automated testing.

5G antenna designs are still very much a work in progress. The initial phase of the 5G deployment is just beginning, and it will involve installing low-frequency 5G to work in collaboration with 4G LTE. This is the testbed for future deployments requiring more complex antenna designs.

This article was originally written by David Talbot for Mouser and substantially edited by the Wevolver team. It's the seventh article of a series exploring 5G. Future articles will explore how 5G differs from existing technology and how the potential of hyper-connectivity will be applied in entertainment, smart cities, and industry and how to get there.

Article One gives an overview of 5G.

Article Three discusses how systems engineers can evaluate the viability of 5G in the existing connectivity ecosystem.

Article Six looks at the ecosystems of 5G infrastructure.

Article #3 of Next-Gen Wi-Fi Applications and Solutions Series: OFDMA, BSS Coloring, TWT, Beamforming, 8X8 MU-MIMO, and 1024-QAM are some key features of Wi-Fi 6/6E that set it apart from all the previous generations of the IEEE 802.11 family.

Article #1 of Next-Gen Wi-Fi Applications and Solutions Series: Wi-Fi standards have come a long way since they first surfaced over two decades ago. The developments in its data transfer rates and range have led it to become the most prevalent wireless communication technology of present times.

Introducing the Next-Gen Wi-Fi Applications and Solutions Series: Dive into the world of cutting-edge wireless communication. This new series introduces and explains the developments in Wi-Fi, 5G, and other RF technologies.