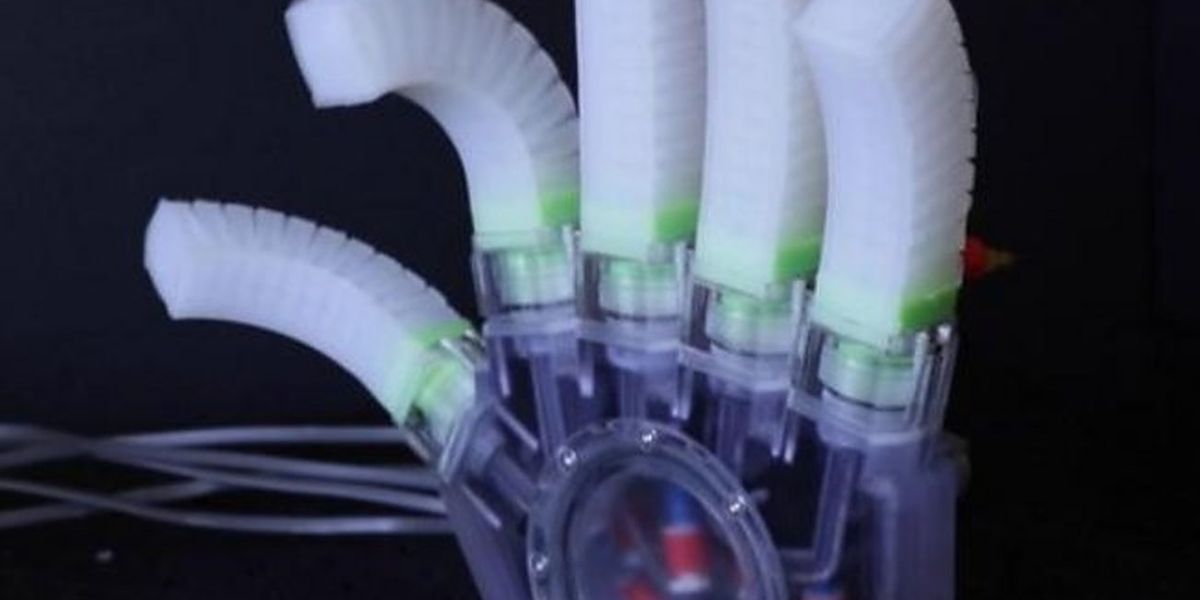 The heart of the new soft robot is a 'hysteretic valve', as the researchers call their invention in a publication in the journal Matter.

A cleverly designed pressure valve lets soft robots respond to their environment without computer control. How that works, is what researchers from Eindhoven University of Technology (TU/e) explain in a recently published article in the journal Matter. The research by Bas Overvelde, associate professor at the department of Mechanical Engineering, and PhD researcher Luuk van Laake, brings robots that move and feel like living beings closer. Such designs are better suited for exploring rough and unfamiliar terrain or for medical applications.

Robots are still mainly associated with hard machines, controlled by a central computer that has to think about each step. Living beings, on the other hand, move smoothly because intelligent behavior is embedded in their bodies, which is also ideal for robots that constantly interact with people, such as in medical care. The research field of soft robotics therefore works on robots made of soft, flexible materials that respond to changes in their environment without external control.

Bas Overvelde, who besides his work at TU/e is also part of AMOLF: "We want to make robots without a central computer, that move and react to their environment thanks to built-in reflexes in the robot body." In the journal Matter, Overvelde's team presents such a soft robot that operates on air pressure (without electronics), which walks and changes rhythm by responding to the environment thanks to a cleverly designed valve.

The heart of the new soft robot is a 'hysteretic valve', as the researchers call their invention in their professional publication. Outsiders may recognize the valve as a variation on the opening of a ketchup bottle. "That ensures that you can easily dose ketchup and that the liquid doesn't leak", says Overvelde: "Yet the ketchup sometimes sputters if you hold it upside down and squeeze it hard." The opening then quickly clatters open and closed. Modern bottles have been modified so that they sputter as little as possible, but Overvelde and colleagues wondered whether this normally undesirable behavior could be used to make a robot move.

Watch how the 'hysteretic valve' works in this video.

In a computer model, the researchers first designed properties such as the stiffness of the tiny flaps in the valve opening. Then the valves were made by pouring silicone rubber into an accurate 3D printed mold. Using a laser, they cut tiny notches in it. This creates a valve that is normally closed, suddenly opens when the pressure is high enough, and only closes again when the pressure has dropped a bit. If you connect this valve to a pump and reservoir, a rhythm of pressure building up and air flowing through, automatically occurs. In this way the muscles of the soft robot are alternately inflated and relaxed.

The new component seems simple, but turned out to have hidden powers, says PhD researcher Luuk van Laake. "When we made a computer model of two such valves connected to the same reservoir, they appeared to move in alternating directions very precisely. Completely unexpected, but it then turned out to actually work." This allowed the researchers to build a four-legged robot with a natural walking rhythm, without external commands. A soft grasping hand with five rhythmically drumming fingers also proved feasible.

Responding to the environment

The ultimate dream of soft robot designers is a robot that not only move by itself, but also reacts to its environment. Van Laake: "Ultimately you want a robot that automatically changes its walking rhythm when it encounters an obstacle, purely because the muscles and joints respond to the counter-pressure."

That response to the environment is already quite successful in the lab. If the researchers briefly close an air hose by squeezing it, the pressure in the robot body changes. The robot then switches to a different walking rhythm. "Our soft robot can respond to the environment without needing commands from a central computer", Van Laake explains.

Before the soft robot is at the care bed, there is still a way to go. But the prospects are good, the researchers think. Overvelde: "You can see here how you can make complex behavior with simple parts, without a computer that has every movement pre-made."

A soft robot that moves by built-in natural reflexes not only saves computing power, but also energy, according to Van Laake. "In living creatures, you also see that a lot of movement and behavior comes from the construction of the body and the mechanics of muscles, rather than being prescribed from the brain." For example, our heart automatically balances the pressure in the left and right ventricles and we reuse the elastic energy stored in our tendons with each step as we walk. "That turns out to be tremendously efficient. There's still a lot of behavior to explore in that regard."

Now it is possible to teleoperate individual and combined control of any number of robotic arms. Thanks to the designed control architecture, the human operator can intuitively create robot groups to control them together.