Together with Ansys, a developer of simulation software, we are creating a series of content about the technologies that drive innovation. Read the foundation article here and our overview of the Indy Autonomous Challenge here.

The Indianapolis Motor Speedway (IMS) will host the very first Indy Autonomous Challenge (IAC) on October 23. Ten teams from 21 international universities will compete in a purely autonomous race for 1 million dollars in prize money. Not only will this be an exciting test of autonomous technology at high speeds, but it will also showcase how university-level engineers have developed the technology to date and provide valuable insights into the future of autonomous vehicles.

This article will describe the retrofitted Dallara race car, touch on the university teams that made it to race day, and explain why this event is a significant engineering milestone in the journey to full autonomy. 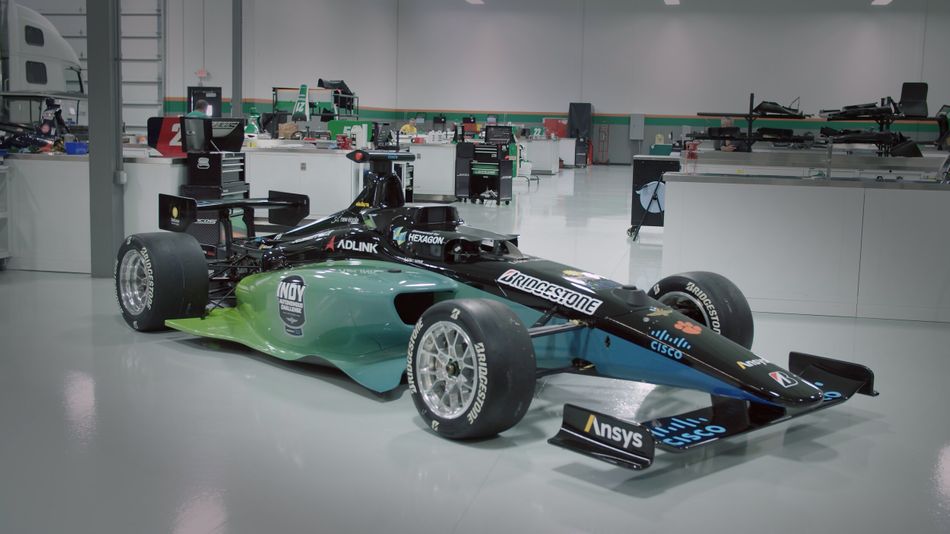 The retrofitted Dallara race car, ready for the IAC event.
A long journey for dedicated engineers

Leading up to this main race, there have been qualifying submissions and technology demonstrations to ensure teams were ready. Each team was required to submit a technical white paper containing preliminary research, perform a simplified maneuver demonstration, and participate in a series of hackathons. Further teams have been mentored and supported by IAC sponsors to help accelerate the team’s autonomous software development.

In a recent interview, Sandeep Sovani, an autonomous vehicle expert with over two decades of experience working for simulation software company Ansys, commented on the massive progress that the teams have made since the early hackathons, which saw many virtual crashes to the final hackathon sessions:

“They were driving in the virtual driving range like pros toward the end (of the simulation phase). And they got to get a lot of the flaws out of their software through simulation.”

The Indy Autonomous Simulation Race, took place in June.  Twenty teams first demonsared their readiness by completing a single lap using the Ansys VRXPERIENCE Driving Simulator platform. This was followed by time Trials which determined the starting grid for two heat races. The winners of these then raced in a tense final. Italian-based PoliMOVE, took home the first prize of $100,000. PoliMOVE is primarily made up of PhD students, with some Master’s students also in the mix. The team is based at Politechnico di Milano in Milan, Italy. The team comfortably took the simulation race win, which  team leader Sergio Matteo Savaresi describes, is due to the team’s wide range of engineering knowledge: 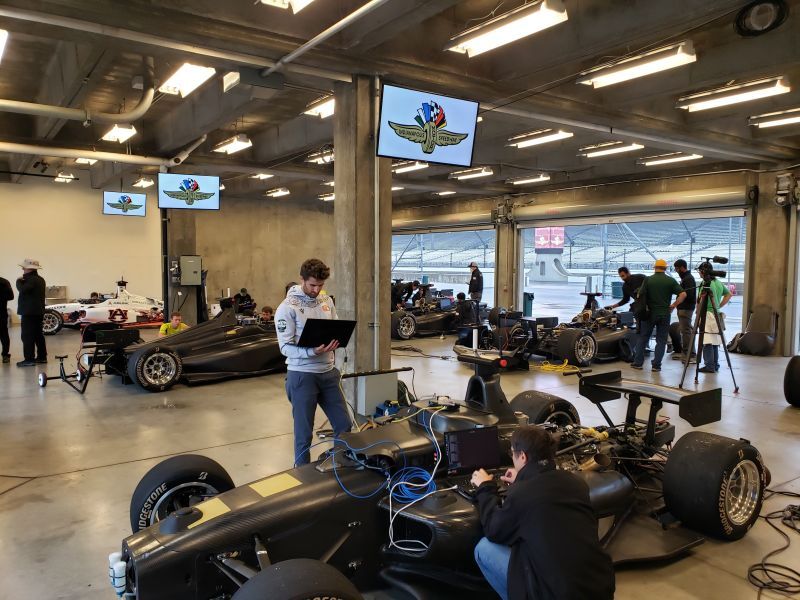 Students preparing the vehicles ahead of track testing.

Clemson University and the International Center for Automotive Research (CU-ICAR) have been involved with the IAC from the very beginning being, charged with converting the Dallara IL-15 to its autonomous counterpart, the AV-21. The university’s Deep Orange program which designs, builds, and develops concept cars was critical in the conversion. The program is made up of mainly master’s level students and is led by automotive engineering professor Chris Paredis.

The conversion task requires changes to the car’s hardware, computing, and control systems and must ensure maximum safety under high-speed conditions. Critical for Deep Orange was to think how each change to the car could also contribute to engineering knowledge of autonomous technology for the real world. The changes made to the Dallara could be integrated later for consumer vehicles to have additional driver safety and crash-prevention benefits.

The starting point for the AV-21 was the Dallara Indy Lights chassis, otherwise known as the IL-15. It’s a single-seater race car, which is used for the feeder series to Indycar. The chassis is carbon fiber and houses a 2L 4-cylinder turbocharged engine that outputs 450 hp. The suspension is double wishbone, with Multimatic DSSV dampers, and the race car has an adjustable front and rear wing.

Sensors and cameras were installed to provide the inputs required for the autonomous software, in the absence of a human driver. Similarly, control mechanisms to replace the driver were added to the cockpit.

Notable changes to the IL-15 were:

The knock-on effect of these added systems to make the race car autonomous includes additional total weight and modified weight distribution. While much of the additional equipment was installed in the cockpit region, where the driver’s weight would be situated, there will be slight differences that were addressed.

In addition, removing the driver from the cockpit and filling it with wiring and control boxes will change the aerodynamics of the overall vehicle. The necessary cameras and sensors will also disrupt the airflow around the vehicle. To compensate, the front and rear wing flaps can be adjusted.

Ten teams have made it through the grueling preparation rounds to qualify to compete at the IAC final event, vying for the 1 million dollar prize. 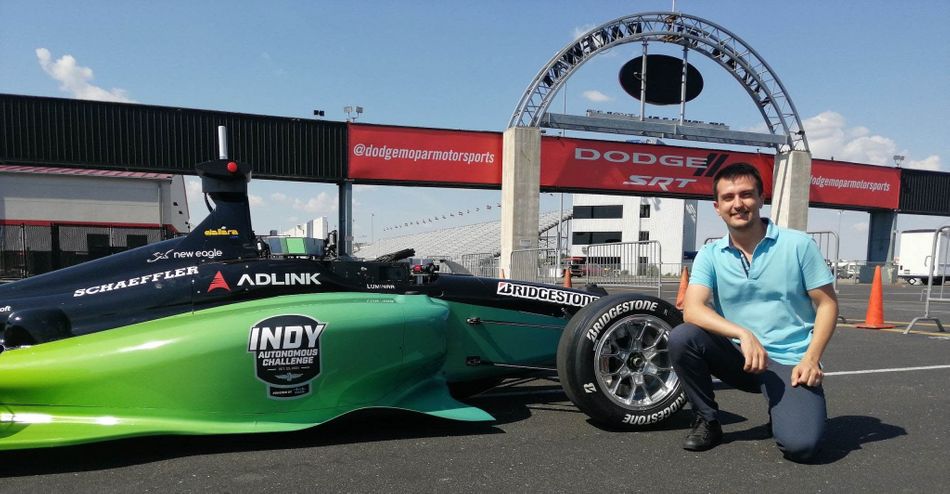 The teams that will compete in the final race on October 23rd are as follows:

Watch the event on October 23rd

While the teams will be pushing the Dallara AV-21 to the limits, beyond the test cases that a road car would see, the stakes are higher with elevated speeds and the addition of aerodynamics. Those attending the event in person will see if the cars make it to the finish line unscathed, and just how differently each team has programmed their systems to compete with a track full of other race cars. 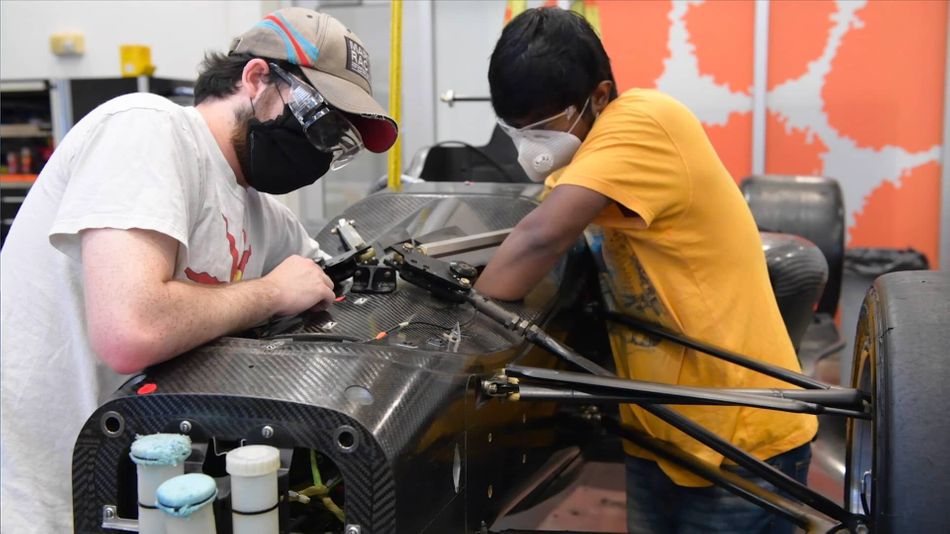 The IAC race is the culmination of months of work by university teams. Image credit: IAC.

Engineers will be poised to learn how far University teams have gotten with their autonomous software. The winner of a $1 million prize will be determined, but you’ll also see whether there’s still much development required before we are racing autonomous cars, or whether we are closer than anticipated. Viewers will have a front-row seat to determine if the IAC furthered its mission of bringing autonomous technology and advanced driver-assistance systems closer to commercialization. The US Department of Energy estimates that autonomous vehicles would reduce energy consumption by 60%. The IAC is a bold step toward technologies that will help reduce CO2 emissions in the transportation sector.

Simulation of both vehicles and systems will help to enable sustainable delivery.

The guide to the technologies that can lower the environmental footprint of transport.

Simulation technology is key to mapping and maintaining the future of our new urban and transport realities.