The Indy Autonomous Challenge (IAC) will culminate in a final race held in October of 2021, where teams will compete by developing software that will drive a modified Dallara-built Indy Lights race car around the Indianapolis Motor Speedway (IMS). The challenge began in late 2019 as teams formulated their plan, demonstrated their ability to program an autonomous vehicle, and have recently taken part in hackathons. This article will cover the impetus of the competition, the technical specifications, the simulation tools, and why this competition matters.

In decades past, grassroots racing had one purpose: to showcase automotive technology. The old adage, “Win on Sunday, sell on Monday'' drove manufacturers to develop faster, better-handling cars. Technology transfer was a seamless thing; the racecars were showroom stock, and what you watched at the track is what you could buy and drive yourself. The technology seen in F1, Indy, or even Le Mans seems to continue to deviate from road car technology. But in the case of autonomous vehicles, the same code used to race a Dallara around IMS could be used to develop the code for autonomous passenger cars.

The Indy Autonomous Challenge seeks to help overcome prominent barriers to automated vehicle (AV) commercialization through an intensive learning cycle where the next generation of automotive engineers can test the boundaries of current assumptions. Here’s how.

The Clemson University International Center for Automotive Research (CU-ICAR) is converting an AV-21 Dallara to accept the autonomous algorithms from each university team in the IAC. To keep everyone apprised of the mods, there are monthly virtual design reviews. To start, here’s what an AV-21 brings to the table:

After CU-ICAR worked their magic on the Dallara, additional Lidar, radar, and optical cameras were added as well as additional batteries which are needed to power the added wiring and sensors. Internal cooling was also added for the batteries and electronics. 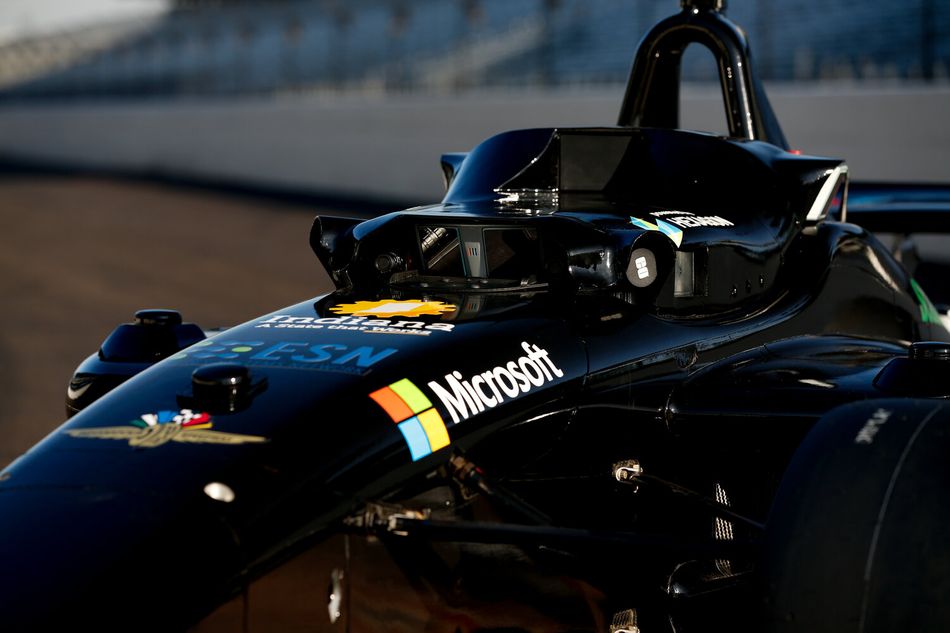 The modified Dallara is equipped with 6 cameras, 4 radars, 3 lidars, and a GPS IMU for positioning. Image credit: IAC

In addition to three on-track test sessions, trials of the autonomous software on a virtual representation of IMS will also be conducted in a VR driving simulator. The VRXPERIENCE Driving Simulator from Ansys includes scanned tracks, like Mcity at the University of Michigan. That track is used for ADAS testing, and by having the real-world track for physical testing side-by-side with the simulation, engineers can easily conduct validation and benchmark testing.

The Ansys simulator also has the ability to take the raw scanned track data (a point cloud collected by specialized companies) and convert it into a high-fidelity model. Often, this process is arduous and takes simulation engineers weeks to define and trim surfaces for simulation. Having that capability within the simulation suite is a huge time-saver on the path to virtual testing. 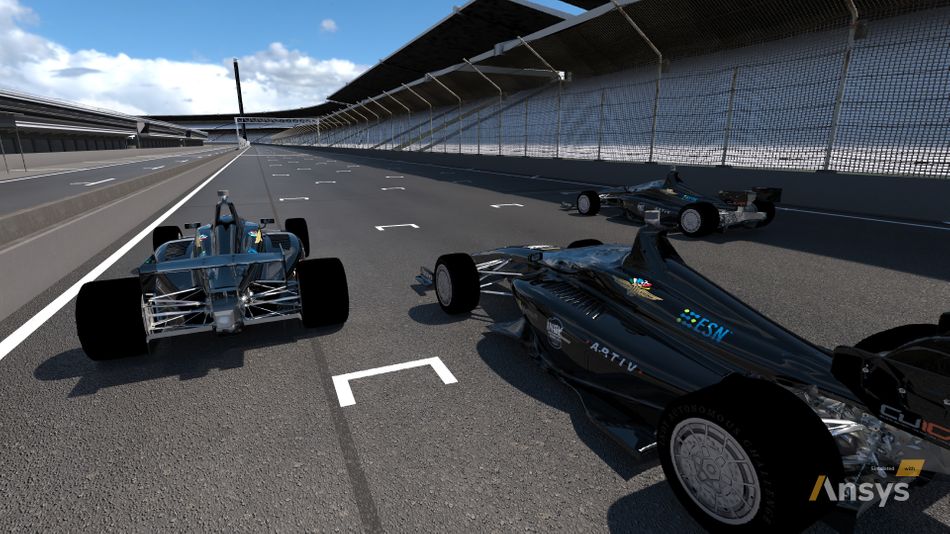 To prepare for the simulation race, teams will have access to the Ansys VRXPERIENCE Driving Simulator, which uses SCANeR and the SCADE Suite. The simulator will reside on Microsoft Azure, which teams may already be familiar with using for cloud computing.

Ansys hosted four hackathons for the teams to compete in and gain experience in the lead-up to the simulation race. Teams will train their AI (artificial intelligence) software within the programmable logic controller through numerous different driving scenarios. 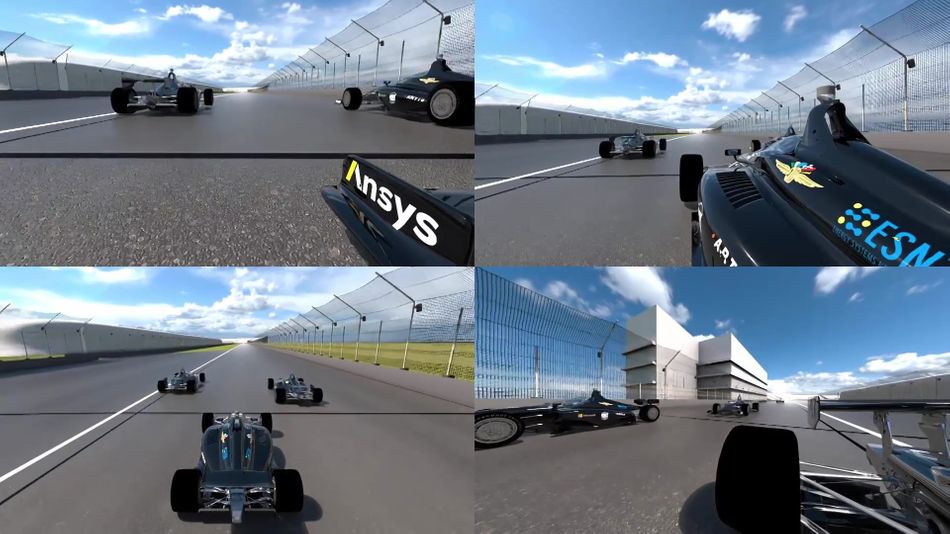 Teams will compete for $150, 000 in prize money in the IAC simulation race on June 17. Image credit: Ansys

In addition to the VR driving simulator discussed above, many simulation tools are used to design autonomous (and traditional) vehicles. The AI used to drive an autonomous vehicle needs to be trained in a large number of driving situations. And while there are private proving grounds where these vehicles are tested in real life, there’s simply not enough time to gather data and train the AI in the real world. The majority of the training and testing is done virtually, and then physical testing takes place, in a sense, as a validation of the simulation.

Engineers in motorsport and automotive engineering use simulation daily. Nearly every discipline with automotive design has a specialized simulation tool to help them design and optimize a car. Structural engineers use FEA and forming simulations, aerodynamicists use CFD, both for full-vehicle performance and individual components or internal flow systems, such as cooling and engine air inlets, and vehicle dynamicists use kinematic analysis tools and the same driver-in-the-loop simulations described above.

By limiting the physical prototyping and testing required, design timelines can be significantly shortened. But it’s also important to note that these tools increase sustainability. In the push for limiting climate change to just 2°, the transportation segment must play a large role, as it currently produces nearly a quarter of the world’s CO2 emissions. And simulation is just one of the many engineering tools that will be used to improve sustainability in the automotive industry.

For example, in the realm of motorsport aerodynamics, the full-scale rolling-road Windshear wind tunnel in North Carolina requires its own power station to test a vehicle at speeds of up to 150 mph. Add to that the emissions of flying the engineering team to the wind tunnel for a three-day test, and the environmental impacts are not insubstantial. If the same vehicle were tested in CFD, using cloud computing resources and even open-source software (like OpenFOAM), the energy and costs required to reach the same conclusions are minuscule in comparison. There’s no separate power grid required, no flights, and no consumables (coated tires, adjustable ride height system for the wind tunnel, and a suite of real parts to test).

The added bonus of simulation tools (versus IRL testing) is the ability to dive into the results and dissect the findings. Post-processing simulations and spending the time to visualize results are two of the incredibly powerful facets of all simulation tools. VR driving simulators allow you to go back into scenarios and determine where things went off the rails and where things improved. Similarly, a CFD simulation allows you to see exactly where a design change impacted the pressure signature of the underfloor of a racecar, but a wind tunnel test just reports your overall forces and balance.

Why the Indy Autonomous Challenge Matters

Simulation and autonomous vehicles are a part of the drive towards more sustainable technology within automotive engineering. Simulation reduces physical testing, which decreases emissions, both in terms of vehicle emissions at track tests and in terms of energy consumption when manufacturing and testing components. The IAC is the launchpad for engineers to get familiar with new technology and be a part of the changing landscape toward sustainable transportation.

The challenge is preparing engineers for jobs in autonomous vehicle development. The university engineering students are solving real-life engineering problems, including “edge case” scenarios, which occur at an extreme operating parameter; for example, avoiding unanticipated obstacles at high speeds while maintaining vehicular control. The IAC will allow for testing of safety and evasive maneuvers during the simulation and final races, which will bring more awareness to the public and foster trust in emerging sustainable technologies.

Over the following weeks, we will do a deep dive into the IAC, highlighting the vehicle, the teams, and the technologies that make it all possible. Our next article will focus on the simulation race taking place on June 30th, where teams compete to win cash prizes totaling $150,000. We’ll explore what the teams will need to prepare, what they will be testing during the race, and why simulation racing is a crucial part of autonomous vehicle innovation.

In the final IAC event, you’ll see whether Dallara race cars running at over 100 mph can successfully complete a race at IMS without any drivers. The stakes are high, as university teams fight it out for the top prize, but the excitement for the engineering community will also be huge as we watch a high-speed demonstration of autonomous driving.

This article was written by former motorsport engineer Kattie Thorndyke with editing by the Wevolver Team and Ansys Global Industry Director, Tarun Tejpal.

Robocup 2021 is different in format, but Tech United can still showcase itself

The soccer robots are challenged to think creatively, to play together and to anticipate quickly on what the opponent is doing.

The InspirON ‘Hackathon Challenge’, a product design competition from Protolabs, invites you to share a design for a hand tool that prioritizes life cycle analysis and sustainability. The winner can receive up to $28,000 in manufacturing support.