What is a Silicon Wafer?

Silicon Wafers (Si Wafer) are thin slices of highly pure crystallized Silicon. Silicon wafers act as a substrate for microelectronic devices and are especially useful in building electronic circuits because of their conductivity and affordability. Silicon comes seventh as the most common element in the entire universe and the second most common element on earth[1]. Some common materials that contain silicon are beach sand, quartz, flint, agate, among others. Silicon is the major component in construction materials like brick, cement, and glass. It also tops the chart as the most common semiconductor which has made it to be the most widely used in the electronic and technology sector[2].

Although silicon crystals may look metallic, they are not entirely metals. Due to the "free electrons" that move easily between atoms, metals are good conductors of electricity, and electricity is the movement of electrons. A pure silicon crystal, on the other hand, is nearly an insulator; allowing very little electricity to pass through it. However, this can be changed through a process called doping. 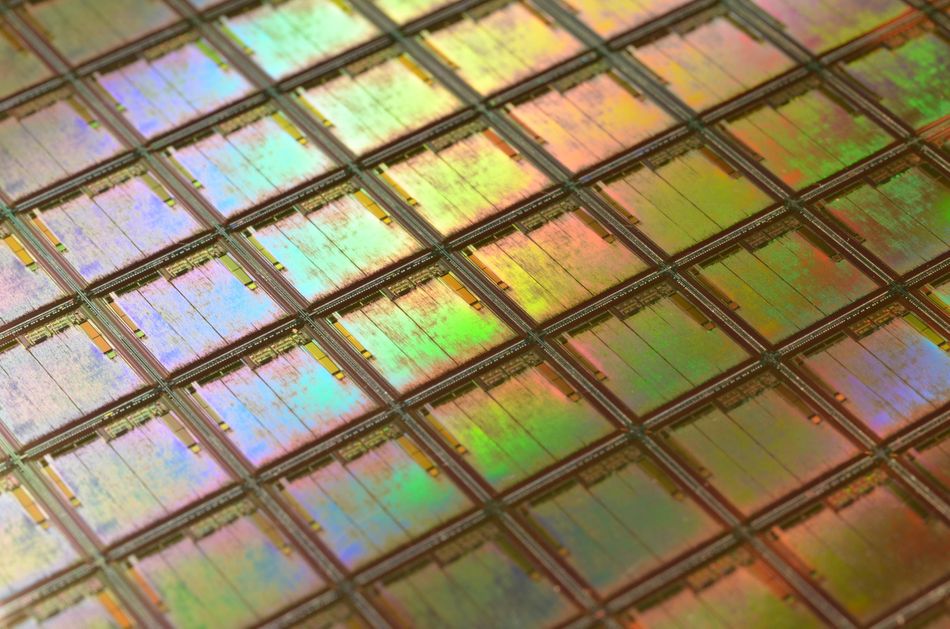 Macro of a silicon wafer. Each square is a chip with microscopic transistors and circuits

Doping is when a little amount of an impurity is mixed into a silicon crystal to change its behavior and integrate it into a conductor[3]. These impurities used for doping are called dopants. Silicon by itself does not conduct electricity very well; however, it can take on dopants precisely to control resistivity to an exact specification. Silicon dopants such as nitrogen, indium, aluminum, gallium, and boron can be added throughout the growing process. So, for a semiconductor to be formed out of the non-conductive silicon, silicon must turn into a wafer; hence, a silicon wafer. The semiconductor can be considered degenerate or extrinsic, depending on the level of doping. It is extrinsic when it involves light or moderate doping, it is considered degenerate when it involves high levels of doping, which makes semiconductors act more as conductors[4].

Silicon wafers come in a variety of shapes and sizes, depending on their use. They're a key component in integrated circuits, which are made up of several electronic components that are designed to execute a certain task. Silicon, a flat disk with a polished mirror-like surface is ubiquitous, as it is found in practically every electronic device. It is a common material for the manufacturing of semiconductors. The surface is smooth, improving its purity and making it suitable for semiconductor devices. Well-known Silicon wafer fabrication methods are the Vertical Bridgeman and Czochralski pulling methods. Recent methods like the Float Zone are becoming popular, owing to fewer defects and excellent purity[5]. They are widely used to manufacture chips and microchips for electronic devices.

Once silicon is extracted from the sand, it needs to be purified before use. It is first heated till it melts into a high-purity liquid of about 99.9999999% purity or higher with no defect in it[6]. It is then allowed to solidify into a silicon rod, or ingot, by using common fabrication methods like the Floating Zone or Czochralski process. Czochralski's method involves the placement of a small piece of solid silicon in a pool of molten silicon, and then pulled slowly in rotation as the liquid transforms into a cylindrical ingot. This is why the end product wafers are all disc-shaped.  Before it cools off completely, the pyramidal ends of the ingot are yanked off. Sharp diamond saw blades are then used to slice the body into thin wafers of the same thickness. This clarifies why the diameter of an ingot would be the determinant of a wafer size.

At the initial stage of the semiconductor industry in the 1950s, the diameter of wafers was just three inches. Since then, wafer size has steadily increased, leading to more chips at a reduced cost and increased productivity. Semiconductor wafers come in a variety of diameters, from 25.4 mm (1 inch) to 300 mm (11.8 inches). Though a 450mm (18 inches) wafer diameter is available, it is not yet widely used[7].

Also, it is important to know that the finished wafers' thickness and diameter must correspond to the mechanical strength and other physical qualities of the material the wafers will be used to make. The finished product must be sturdy enough to support its weight without shattering when handling the products of the wafers' diverse applications. As more material is added in the fabrication of the slice, the diameter of the wafer increases, as does the weight of the wafer. When enough weight has been added, the diameter cannot be increased because it compromises the slice's strength[8].

If the weight is not placed appropriately, a relatively little pressure will be enough to break down the wafer. Sliced wafers must be processed before they can be used in manufacturing. Machines and abrasive chemicals are used to polish the wafer's rough surface to a perfectly smooth finish. The impeccable surface makes printing circuit layouts on the wafer surface easier.

Below are the names and functions of each component of a completed wafer.

1. Edge Die(chips): It is considered as the production loss. The chips along the edge of a wafer. Larger wafers have less chip loss.

2. Scribe Lines: Between the functional portions, there are narrow, non-functional areas where a saw can securely cut the wafer without destroying the circuits. These thin areas are the scribe lines

3. Chip: a little piece of silicon that has electronic circuit patterns

4. Flat Zone: edge of a wafer that is yanked off flat to aid in wafer orientation and type identification.

5. Test Element Group (TEG): a prototype pattern that displays the actual physical features of a chip (diodes, circuits, capacitors, transistors, and resistors) so that it may be tested to know if it works adequately.

What are the different types of Silicon Wafers?

All silicon wafers are extremely useful components, just that there are different variations used for different purposes. It is therefore imperative to know about the different types of Silicon Wafers. There are mainly two varieties of silicon wafers commonly used today. These are:

Undoped Silicon Wafers, also known as Intrinsic or Float Zone (FZ) do not have any dopants in them. They are made of strictly pure crystalline silicon. This type of silicon wafer is recognized as the ideal semiconductor.

As earlier mentioned, the primary use of silicon wafers is in Integrated Circuits(IC's) as it forms the critical components of IC's. IC’s are a collection of electronic components that work together to perform a certain task. Though different semiconductors have been tested over time, silicon has proven to be a more stable option. Silicon wafers are used in a significant variety of gadgets throughout the world. Its application spans different types of industries. Below are the details of the use cases of Silicon Wafers:

Semiconductors come in different forms and shapes and are the building blocks for a wide range of electronic devices. These include transistors, diodes, and integrated circuits. They are fabricated using silicon wafers, which lend their compactness and efficiency[9]. Due to their capability to handle a wide range of voltage or current, they are used in optical sensors, power devices, and even lasers.

Silicon wafers are responsible for boosting the digital era as it is widely used in electronics and computing. RAM chips, which are a type of Integrated Circuit, are created from Silicon Wafer. This makes Silicon wafers feature strongly in the computing industry. Also, Silicon wafers are commonly used to manufacture many devices like smartphones, automobile electronics, home appliances, and drone technology. Practically, any electronic circuitry device has a high-level use-case for Silicon wafers. New fabrication techniques and automated processes are making them more effective and efficient.

For optical grading, polished Silicon wafers are often specially manufactured. Silicon wafers are the perfect economical material with applications in Reflective optics and Infra-Red (IR). Floating Zone or CZ methods of fabrication are used to create Silicon wafers for optics. This is because the methods yield fewer defects and are higher than other methods. Usage is found in micro-optic and fiber optic devices worldwide. A clear example is the image sensors (CIS) made of complementary metal-oxide-semiconductor (CMOS) that are utilized in cameras.

Solar cells need silicon wafers for increased efficiency and to grab more sunlight. Materials like amorphous Silicon, monocrystalline Silicon, and cadmium telluride are often used. Fabrication processes, like the Floating Zone method, boost solar cell efficiency by close to 25%. Just like microchips, Solar cells follow similar manufacturing processes. The purity and quality levels needed for solar cells are not as demanding as the usage for computing and other electronics.

Because of its superior properties and qualities, silicon wafer has been used in the aviation sector since its inception. Silicon wafers are frequently utilized in the aviation industry as a covering and binding material and used for shielding and insulating delicate tools from extreme temperatures. It has been a good and trustworthy choice for decades due to its widespread use and tolerance to high temperatures. Silicones are the most common material utilized in this industry. Polymers with a chemical cohesiveness formed on a long chain of oxygen, as well as silicon components, make up the majority of it. Silicon wafers are extremely helpful in aircraft original equipment manufacturing (OEM), as well as in repair, maintenance, and overhaul. Aircraft undergo wear and tear as a result of their frequent use, necessitating their replacement. Silicon wafers are a practical option because they are delivered in dual cartridges and tubes, saving time and reducing waste.

Silicon wafers are used in almost every element of human life and the advancement of technology. Due to its stability over other semiconductor materials, Silicon wafers are the most widely used materials in the field of technology. They not only provide a better option in contrast to other metallic substances out there but are also widely available on the earth. It is due to the development and research on semiconductor materials like silicon, silicon carbide (SiC), germanium, arsenide, and gallium that the advancement in technology is possible at this huge level. Thanks to the invention of IC's, powered by silicon wafers, which the scientists and the inventors have utilized to reduce large and bulky machinery to mere handheld devices, which are easy to carry from place to place. This has become a widespread and innovative change in most areas of manufacturing. Further researches are being made for the increment of the size and controlling the properties by the means of doping of semiconductor wafers[10]. So you should expect more sophisticated inventions from silicon wafers in the near future.

3. Semiconductor Technology A to Z(na): Everything about semiconductors and wafer fabrication. Available at: https://www.halbleiter.org/en/fundamentals/doping/ [Accessed 12th November 2021].

9. Wafers World Incorporated (2016). What is it and What is it used for? Available at: https://www.waferworld.com/post/silicon-wafer-what-is-it-and-what-is-it-used-for

10. Research and Markets (2021). Insights on the Wafer Handling Robots Global Market to 2026 - Burgeoning Demand for Wafers Across Several Industries is Driving Growth. Available at: https://www.globenewswire.com/news-release/2021/06/22/2250895/28124/en/Insights-on-the-Wafer-Handling-Robots-Global-Market-to-2026-Burgeoning-Demand-for-Wafers-Across-Several-Industries-is-Driving-Growth.html