NMOS and PMOS are the main forms of MOSFET. This article describes in reasonable detail, what PMOS and NMOS are. It also describes the types of PMOS and NMOS transistors, the body effect, construction and physical operation, and their applications.

NMOS and PMOS are the two main forms of MOSFET. Typically made by carefully controlling silicon oxidation, MOSFETs (metal-oxide-semiconductor field-effect transistors) are a type of field-effect transistor (FET). The conductivity of the device is controlled by a logic gate that is insulated and has a voltage. It is the most common type of FET (field-effect transistor) used to switch or amplify voltages in circuits. It is a voltage-controlled device and is constructed by three terminals. The terminals of MOSFET are the source, the drain, the gate, and the base. Commonly the base is connected to the source terminal. Depending on the semiconductor's doping, the substrate, source, and drain are all positive or negative.

These are separated from the metal (or conductive silicon) gate terminal by a non-conductive oxide layer. The electrical properties of the semiconductor under the gate are altered by applying a voltage, which permits or prevents the flow of electricity between the source and drain. Bipolar junction transistors (BJTs) are no longer as ubiquitous in digital and analog circuits as MOSFETs. MOSFET is the underlying technology for most discrete transistors, digital logic gates, integrated circuits (IC), and thin-film transistor (TFT) LCDs. They are regarded as the most produced item in human history and are the workhorse of contemporary electronics.[1]

When p-type dopants are utilized in the gate area (the channel), the transistor is known as a p-channel metal-oxide semiconductor (pMOS) or PMOSFET. The device activates when the gate receives a negative voltage. PMOS or pMOS also referred to as P-type metal-oxide-semiconductor logic, is a category of the digital circuit built employing metal-oxide-semiconductor field effect transistors (MOSFET) with a p-type semiconductor source and drain printed on a bulk n-type "well." By reducing the high voltage on the logic gates, the resulting circuit can be "turned on" by allowing electron holes to flow between the source and drain. PMOS circuits are simpler to manufacture than NMOS circuits because they are less vulnerable to electronic noise. In the 1970s, when microprocessor technology was still in its infancy, they were frequently used. In comparison to the NMOS and CMOS alternatives, PMOS has many drawbacks, such as the requirement for a variety of supply voltages (both positive and negative), high power dissipation in the conducting state, and very big features. Additionally, the changeover pace is slower overall.[2]

NMOS devices are N-channel metal-oxide semiconductors (NMOS) often called the NMOS logic family. They are a type of microelectronic circuit used in the design of complementary metal-oxide semiconductors (CMOS) and logic and memory circuits. A greater number of NMOS transistors can be accommodated on a single chip than their P-channel metal-oxide semiconductor (PMOS) cousin. The p-type transistor body in these nMOS transistors is converted into an inversion layer to carry out their function. Between the n-type "source" and "drain" terminals, this inversion layer, known as the n-channel, can conduct electrons. The third terminal, known as the gate, receives voltage to produce the n-channel MOSFET. With the development of superior fabrication methods, including the continued removal of impurities from the silicon stock that reduced noise, PMOS was superseded by NMOS. [3]

Transistor Types of PMOS vs NMOS: Compare and Contrast

The primary distinction between PMOS and NMOS is in the two systems' various structures. While NMOS uses N-type doped semiconductors as source and drain and P-type as the substrate, those of a PMOS device are the reverse. When exposed to a non-negligible voltage, an NMOS (negative-MOS) transistor creates a closed circuit; when exposed to a voltage of about 0 volts, it makes an open circuit. A PMOS (positive-MOS) transistor forms an open circuit when it gets a non-negligible voltage and a closed circuit when it receives a voltage of about 0 volts. NMOS is more frequently employed than PMOS because of its advantages, however, PMOS is still needed in many applications because of its polarization characteristics.

Additionally, both NMOS and PMOS are frequently employed in analog and digital microelectronics. In particular, the CMOS (complementary MOS) structure, one of the most common MOS structures, applies to both PMOS and NMOS.  The ON resistance of an NMOS is roughly half that of a PMOS, although PMOS is less noise-prone. For the same output current, NMOS transistors offer a smaller footprint than PMOS transistors, and NMOS is also quicker than PMOS. In conclusion, NMOS and PMOS should both be created to function symmetrically.

MOS transistors are constructed on silicon wafers. To create N-type, P-type, and insulating zones, this technique uses layer-by-layer semiconductor doping and oxide growth. To produce geometric shapes, photolithography and chemical etching are employed. The drain and source voltage regions are strongly doped with either N-dopants (NMOS) or P-dopants (PMOS), whereas the substrate is extensively doped with the opposing type (N-type for PMOS and P-type for NMOS). Due to the depletion region created by this alternation, no current can move from the source to the drain.

The substrate and the Gate are separated from one another by a thin layer of silicon dioxide to which the Gate is bonded. Minority carriers are drawn to the area below the SiO2 layer by the electric field when voltage is applied to the gate, which is the field-effect transistor (FET) portion of a MOSFET. When there is sufficient charge in that area, the minority carriers merge with the majority carriers to produce a channel similar to the drain and source.

As long as VDS (voltage between drain and source) forms a low voltage, lower than the difference between Gate voltage, also known as VGS (voltage between Gate and Source) and VTH (threshold voltage), the channel exhibits ohmic resistance for a fixed VGS (linear operation mode). The channel then gets "pinched" and the charge concentration close to the drain is nullified. The boundary separating the linear and saturated zones is known as channel pinch-off. The channel-length modulation effect previously stated occurs as VDS rises because the pinch point shifts and the channel's effective length decreases.[4] 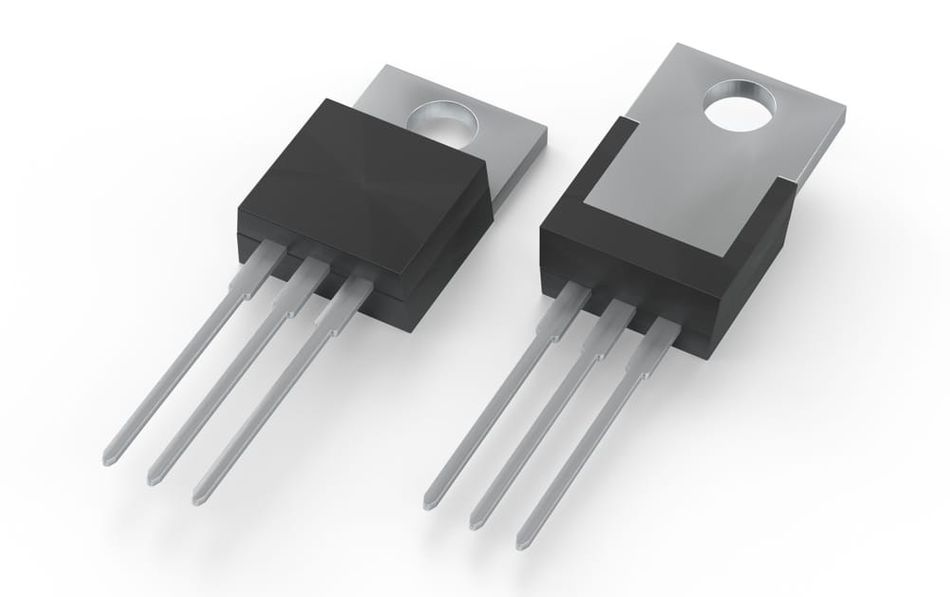 The NMOS and PMOS can be utilized as active loads, capacitors, voltage-controlled resistors, current reflectors, diodes, and even trans-impedance amplifiers, it is however challenging to discuss every application for them. Therefore, we will concentrate on the two most common applications: switches and voltage amplifiers. But in other situations, the same logic that was utilized here would work.

A good switch has two properties: a very large impedance when off and a very small impedance when on. If the circuit isn't opened, leakage currents will flow through, making the signal path uncontrolled. The signal will fade and power losses will increase if it doesn't shut down.

With large impedance channels in the cut-off region and low series resistance in the linear area, MOSFETS excels at both characteristics. The control circuit is substantially simplified by the separation of the command signal from the signal path. In switched-mode power converters, low resistance and high gate impedance are preferred since they significantly increase efficiency.

Additionally, MOS switches' small footprint considerably increases the density of logic ports on a single chip, which was essential for the current technology's digital revolution. Both NMOS and PMOS transistors can be used to create switches, depending on the control signal and current flow. It is crucial to design the transistor to have a very low resistance point in the closed state in microelectronics applications where MOSFET dimensions can be adjusted.

To prevent crosstalk through the transistor when it is in the open state, parasitic capacitances should also be kept to a minimum. Monitoring is required for several properties, including peak voltage, charge injection, maximum current, and switching time. The transistor switch should be chosen when employing discrete MOSFETs, as most switched-mode power converters do, taking into account all of the aforementioned factors as well as heat dissipation and gate driving. There are numerous topologies for MOSFET switches.

Since NMOS and PMOS are both "voltage to current" converters, a voltage amplifier can be produced by merely connecting a resistive load to the current output. In contrast, for the drain current to serve as an appropriate current source, the drain current must be independent of the drain voltage (in other words, the output impedance should be high). The MOSFET must therefore operate in the saturation area to function as a voltage amplifier. The input signal should also be reduced to a minimum to prevent non-linear effects due to the existing equations' extreme non-linearity. The literature has methods for circuit linearization.

There are three types of MOSFET amplifiers:  common-gate, common-drain, and common-source. What sets each pin apart is its function.

A set voltage is applied to the Gate, and the Source serves as the input. This amplifier's input impedance is extremely low because the signal is connected to the Source. The miller effect is, however, removed, leading to a gain in bandwidth, There is moreover yet another. When used in high-frequency applications, it is frequently used for current-to-voltage conversion.

This amplifier connects the drain to a fixed voltage and uses the gate and source as outputs. Due to the constant and linear voltage unit gain it provides, this design is frequently used in buffers. The voltage applied to the Drain of the transistors is often called VDD.

The source is connected to a fixed source voltage, the drain is coupled to a resistive load for amplification, and the gate is utilized as the input. High gains and high input impedance are the major applications of the common-source. However, the circuit's frequency is constrained by the miller effect and the gain is negative.

MOSFETs are frequently utilized in high-speed switching and integrated circuits. To produce a conducting channel between the source and drain contacts, MOSFETs apply a voltage to the oxide-insulated gate electrode. MOSFETs are divided into two categories: NMOSFET (also known as NMOS) and PMOSFET, depending on the type of carriers passing through the channel (often known as PMOS). On the other hand, complementary metal-oxide semiconductor (CMOS) is a sort of metal-oxide-semiconductor field-effect transistor (MOSFET) fabrication method that employs complementary and symmetrical pairs of p-type and n-type MOSFETs for logic tasks.

The research group led by Grace Xing and Debdeep Jena presented research on a new gallium oxide field-effect transistor at a conference at the Massachusetts Institute of Technology May 29-June 1.