Buoyed by the rise of 5G technology, which is ushering in a new era of connected devices, the market has matured from consumer items such as smartwatches and body cameras to workplace products such as exoskeletons[2] and smart glasses, which can be used to carry out industrial inspection and repair tasks at remote locations to transmit health data between medical professionals.

The wearable tech sector is fast becoming a major pillar of modern society - amplified by the events of the past 18 months. An increased interest in health monitoring and remote working, prompted by the COVID-19 pandemic, is expected to drive this growth still further this year, with estimated global spends of $81.5 billion, an 18.1% increase from 2020[3]. Although data shows the industry is here to stay, difficult obstacles must be overcome for it to fulfill its potential.

While the wireless technology which allows for this new era of wearables as components of the Internet of Things (IoT) is evolving at breakneck speed, there are critical challenges that risk holding back the development of wearable tech.

The first challenge is designing items for comfort and wearability around electronic components which were never conceived of with this application in mind. By its nature, wearable technology should be small and form a seamless part of an existing outfit or uniform. If it is too bulky or intrusive, the tech risks undermining the task for which it was designed to assist. Building electronic devices has never required thinkng this way before. Because of this, designs often include solid and inflexible components.

Designing wearables is very much constrained by the extent to which the electrical components inside them can be positioned and shaped together. Along with the design issues, another challenge in wearables technology is power consumption. IoT wearables rely on short bursts of peak power to collect and transmit data. Standard coin cell batteries can have trouble providing the required levels of power to facilitate these peaks.[4]

The tasks which workplace wearables are required to perform mean they can not be powered effectively in the same way a consumer wearable can. While something like an Apple Watch will have a fairly consistent power drain, a workplace wearable will have more wireless updates which will be sending data pings. This puts a significant drain on internal power resources. 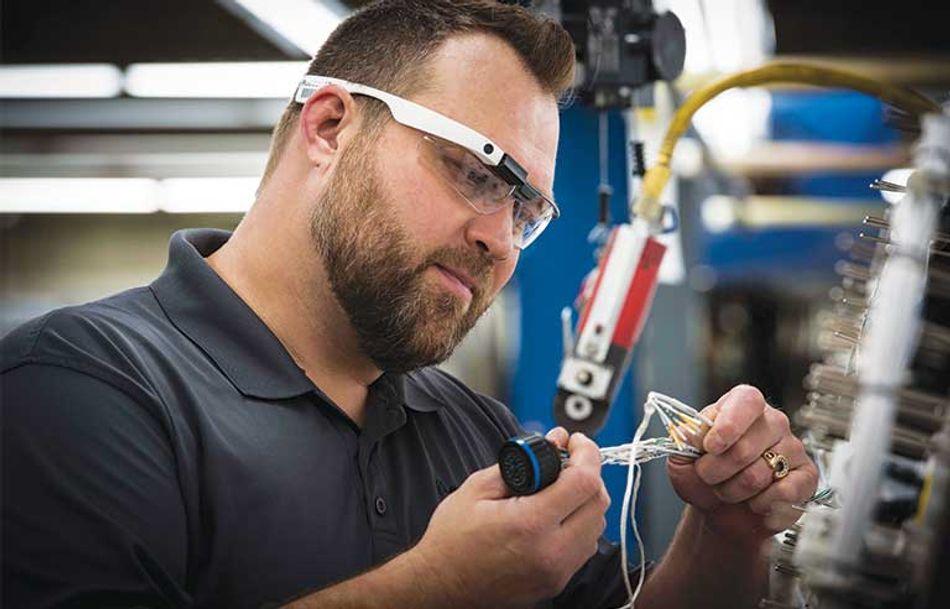 Workplace wearables such as smart glasses have a different power consumption profile than consumer products such as Fitbits.

The ramifications of this in an industrial setting are potentially severe. A vital piece of wearable technology that loses functionality during a remote inspection or operation where it can not be easily recharged or the battery replaced could have implications for safety and cost.

The wearable sector has turned to alternative ways of generating power beyond traditional batteries to solve the power issue. This includes techniques such as micro-magneto-electric, thermoelectric, piezoelectric, and photoelectric harvesting methods.[5]

While solar energy is considered a viable source of alternative power, this type of technology limits the use of solar-dependent wearables to locales where sunlight is prevalent -- not to mention that the wearable must be worn so as to not be covered up by equipment or uniforms. That creates practical limitations for day-to-day use.

One viable solution is to combine these harvesting methods, but any energy produced still has to be stored somewhere.

Supercapacitors as a solution

A game-changer for the wearable sector is supercapacitors. Often referred to as ultracapacitors, they store energy like a battery but with significant and superior differences. Rather than store energy chemically, a supercapacitor stores it through charge separation and discharges energy in short but intense bursts, rather than discharging a smaller amount of power over a longer period. This makes supercapacitors more suited to sustaining the bursts of energy needed for IoT functionality.

Crucially, supercapacitors can also be charged and discharged more quickly than a traditional battery and can withstand more charge/discharge cycles during their lifespans.

While supercapacitors have significant advantages over batteries in terms of storing and discharge power, they have drawbacks that can impact their usability in wearable tech. Due to their construction, they are hard and brittle, limiting the forms they can be shaped into. As previously mentioned, one of the challenges of designing wearables is the practicality of making them flexible, comfortable, and wearable in existing uniforms and equipment – an inflexible and brittle supercapacitor, therefore, will not facilitate the ease of design and construction necessary to overcome this challenge.

The ideal scenario is to build a supercapacitor with all the technical advantages of power storage and usage but is flexible enough to be built into wearable technology. This is the problem flexible capacitors from Capacitech Energy solve.

The company’s Cable-Based Capacitor (CBC) is a flexible and wire-shaped supercapacitor featuring ~3F of capacitance rated to 1.6V[6]. It is flexible, wire-shaped, and can be used inside wearable belts, necklaces, and safety straps for glasses or headphones, among other places such as a product or system’s wiring infrastructure itself. 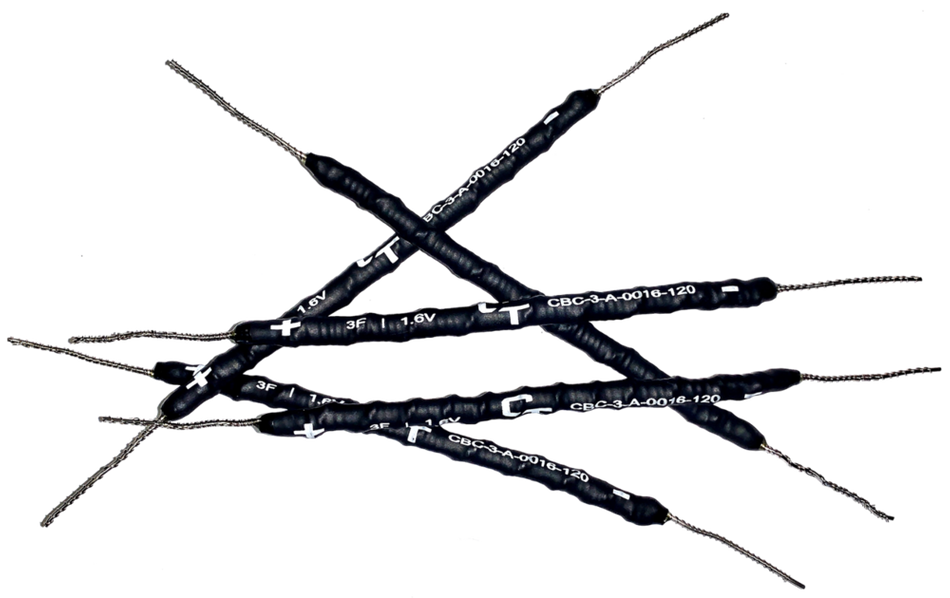 These capacitors quickly charge and discharge as needed and can be built into the wearable technology itself because of their flexibility. This solves the dual challenges of providing power for the next generation of IoT wearables and having a flexible design to keep wearables practical, comfortable, and retain the ability to perform their tasks. In addition to practical applications, there are also environmental and economic benefits when considering the costs of running multiple wearable devices as part of a wider IoT ecosystem.

A single battery may need to be replaced roughly every 2.5 years, so with an IoT system of 500 devices, pairing a CBC with an energy harvesting device could save approximately $15,500 over the course of a decade.

The wearable technology market is expanding and is becoming a vital component of the IoT landscape. But despite the desire of both consumers and industry to embrace the technology, it is hamstrung by the limitations of existing power sources and the need to retain flexibility which enables practical wearable designs.

Capacitech Energy’s Cable-Based Capacitor solves both problems. It addressed power issues by discharging energy at the peaks necessary to enable IoT functionality. It also overcomes the design issue by not having the hardness and brittleness of other supercapacitors which make their practical application in the design and manufacture process of wearables infinitely more difficult. Thanks to its unique features, the CBC can power IoT-enabled wearables, while becoming a seamless and unobtrusive part of their design.

Existing cellular infrastructure now enables remote monitoring of wide-scale electricity transmission and distribution networks. The added value is identifying and pinpointing faults as soon as they occur or even before they occur.

Article #1 of our Circuit Protection Series: Wired IoT has a range of communication standards that require specific protective solutions.