The pace and scope of technological innovations today is very exciting. Computers, cameras and even cars double their performance approximately every two years. This is thanks to the rapid advancements of semiconductor technologies, which change so rapidly, a whole new world is created every decade or so.

This is all about to change. But first a very brief history of capacitors.

Flashback to 1746.  A capacitor is a device that stores an electric charge. This was first demonstrated by the Leyden Jar, invented by Ewald Jurgen von Kleist at the University of Leyden in Holland. The Leyden Jar is a glass jar wrapped with one piece of metal foil on the outside and another, separate piece of metal foil on the inside. When the foil was connected to an electricity source and then disconnected, scientists noticed that the jar would store the charge even after the source was disconnected.  This means you could save electricity after it was generated for later use.

While there was not much use for such a device at the time, besides storing the electricity collected from Benjamin Franklin’s kite-flying experiment, this was the origin of the function of capacitors. It was not until the 1830s when Michael Faraday started to experiment with the materials that go inside the capacitor’s plates to study the impact of its energy storage capability.

With the exception of supercapacitors, the capacitors we still used today were invented in the early 1900s. Different technologies allowed for different power density, peak voltage and frequency characteristic.  This lead to the development of ceramic, aluminum electrolytic, tantalum, polymer,  and eventually supercapacitors (Figure 1). 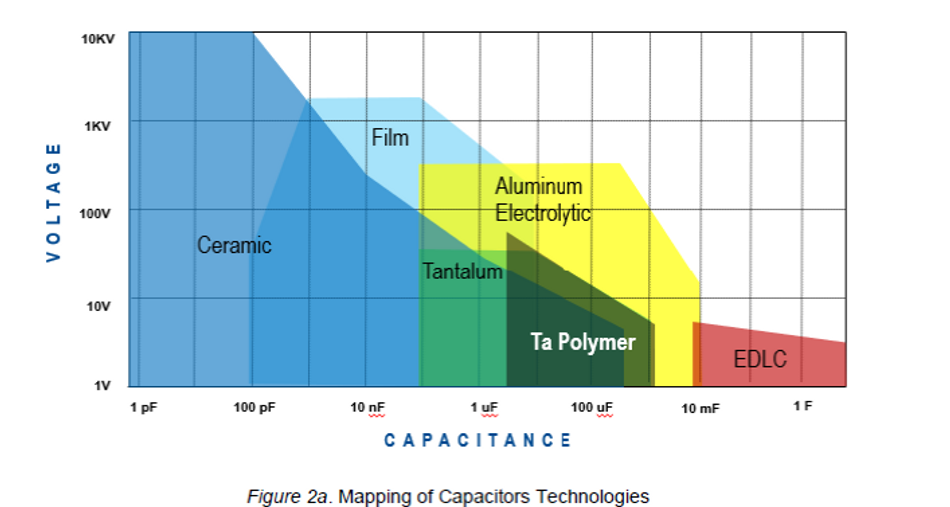 The ability to charge and discharge a lot of energy very quickly secures supercapacitors’ place in the future, being critical to the mainstream adoption of a variety of technologies enabling Cleantech, Wearables, and Internet of Things (IoT) applications among others. The ability to charge and discharge quickly points to supercapacitor’s low internal resistance and high-power density, its chief characteristic. In addition to this nearly instantaneous ability to absorb and deliver power, supercapacitors have a very long cycle life. These features make them ideal for applications where short bursts of power are needed. Common examples include providing peak power to complement a battery or turning on a large electric motor, peak load leveling for high quality audio systems or power sensitive communication devices, backup power to telecom equipment or to give electronics enough time to safely shut down, and for collecting energy from intermittent sources such as indoor solar cells.

Academic and industry leaders have largely focused on improving the energy storage materials that go inside of supercapacitors to increase their performance, specifically increasing energy and power density. This is important work but is not the only avenue for innovation to improve supercapacitors.

The Opportunity in Changing the Shape of Supercapacitors

Many circuits have a working voltage above that of a single supercapacitor, which is typically 2.7 volts. This requires supercapacitors to be stacked into a bank, which takes up significant space in the system or on the circuit board. This is the case for most high-value supercapacitor applications, like renewables and electric vehicles. In these kinds of applications, a lot of supercapacitors are required to be connected in series and parallel, which leads to negative engineering tradeoffs like:

Capacitech’s innovative CBC leverages its physically flexible form factor to eliminate the need to make these painful tradeoffs. This is because, like no supercapacitor before it, the CBC can be routed through areas where space is available on the circuit board or placed off the circuit board and integrated into other parts of the product or system’s infrastructure instead.

Internet of Things Use Case

One attractive use case for this wire-like supercapacitor is in the IoT space. Limited by a low cycle life, battery powered IoT devices have a short service life. The cost of frequently replacing these batteries every 2-5 years is staggering. A technician can expect to spend 20% of their day changing batteries for a typical IoT installation. Energy harvesting technologies, such as a solar cell, on their own are extremely limited due to their low peak-power capability; however, they can be paired with a high-powered supercapacitor to serve as an alternative to batteries. This technique is growing in popularity, but also forces design substitutions to free up space on the IoT device’s PCB to make room for supercapacitors. Instead of using space on the PCB, the cable form factor can be connected with the wires coming from the energy harvesting device. Capacitech’s supercapacitor features 3F of capacitance, can be charged at low currents, and is capable of providing over 1A of current to the load. The result meets the power requirements of Bluetooth, Wi-Fi, LoRa, and even cellularly connected IoT devices. Economically, it could reduce the cost of ownership for the end user (by replacing costly batteries) by ~25% and returns ~33% of the space on the IoT device’s PCB to the design engineer for miniaturization or new features.

The CBC’s ability to integrate into wiring harness and to complement batteries makes it a perfect solution for both gas and electric powered automotive vehicles, as well as several applications in renewable energy systems.

While the value added by supercapacitors is known and well documented, finding the physical space to add supercapacitors is another challenge to be overcome with form factor innovations. With the CBC, designers can build a discrete and distributed network of supercapacitors to help miniaturize electronics and complement batteries; whether that is integrating supercapacitors into the leads of an indoor solar cell for an Internet of Things application, the wiring harness of an electric vehicle, or the photovoltaic wiring of a solar farm.

Capacitech Energy is building a flexible future with its shape-shifting products helping engineers design the next generation of wearables, solar power systems, SmartCity electronics, electric vehicles and more. Taking the prospect of getting versatile energy storage into new places, Capacitech Energy, a game-changing team, paints a picture to the future you want to live in. Learn more about how Capacitech’s Cable-Based Capacitors will improve your next design.