Why is that? How can batteries and supercapacitors be used at the same time? First, let’s discuss the strengths and weaknesses of both of these energy storage technologies.

The two parameters that are of the most interest are specific energy and specific power. Specific energy refers to the ability to store large amounts of energy and deliver that energy over a long period of time.  Specific power describes the loading capability, which refers to how quickly the energy storage technology can deliver energy to a device, load, or system. A good way to visualize the difference between these two parameters is to imagine the energy source as a barrel with water inside and a hole that lets the water flow out. The size of the barrel determines how much water can be stored; this is the specific energy. The size of the hole controls the amount of water that can flow out; this is the specific power. 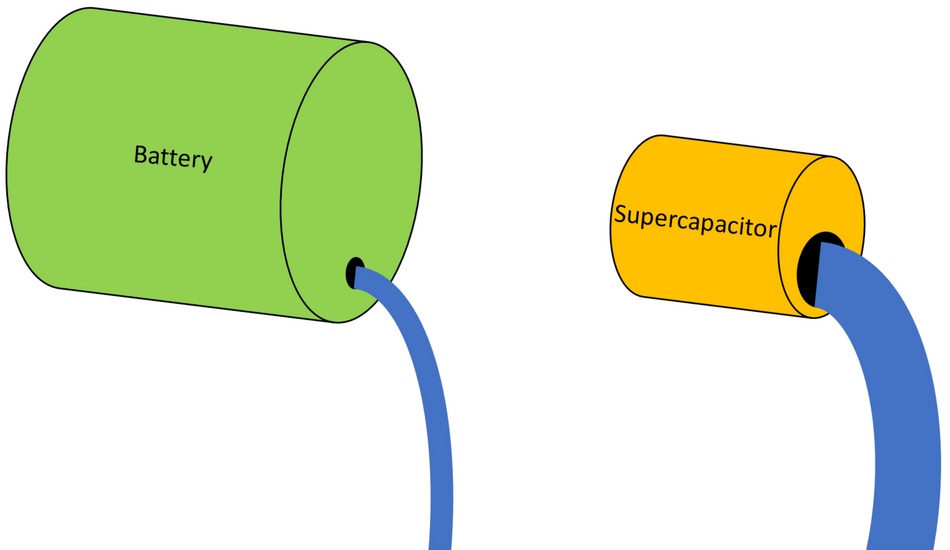 Batteries, both the single-use or rechargeable kind, have a very high specific energy. However, the tradeoff when using batteries, which excel at delivering energy over long periods of time, is that it will struggle to deliver energy quickly (it will have a low specific power). Even the revolutionary new solid state batteries being developed, which boast a specific energy rating twice that of conventional batteries, still have a low specific power rating. This is unfortunate since supplying energy in quick bursts is sometimes needed to accomplish tasks like leveling a load or providing the inrush current to turn on a motor. Having any battery do this can put additional stress on it, wasting its capacity and/or shortening its operating life. Therefore, it is far from practical to purposely design a system that requires a battery to be used like this. The current solution is to add additional batteries to over design the energy storage system so that the stress is shared by more batteries to reduce its impact. This is inefficient in terms of design and cost.

Alternatively, supercapacitors have high specific powers and low specific energies. This means they are ideal for delivering quick bursts of energy, but they cannot store as much energy or deliver it for nearly as long as batteries can.

Before looking at the various applications, let’s further compare batteries and supercapacitors:

One important application in the IoT field is internet communications. Internet communications are carried out using energy efficient radio transmitters, and radio transmitters require a high current for short durations. As explained earlier, batteries are very good for supplying small currents for long periods of time. So supercapacitors would be preferable to use with these radio transmitters, since supercapacitors can supply large currents in short bursts. If you tried to use a battery for this purpose, it is possible to burn out the battery before its energy is actually depleted, which means you could be prematurely replacing your batteries. This could be avoided if supercapacitors were used, since it is their designed purpose.

So Why Not Both?

One of the biggest complications of including both batteries and supercapacitors in the same design is the lack of physical space. Size and shape restrictions often force engineers to choose one quality over another and only use one energy device, rather than implementing both of them. This the main appeal of Capacitech’s Cable-Based Capacitor (CBC). The increased flexibility of these supercapacitors can help integrate them into systems where conventional physical space may not be able to support additional devices. Being able to populate this unused, unconventional space would be a great strength for any design.

As we mentioned earlier, the same regenerative braking system that busses and cars use can be scaled down to smaller electric vehicles like scooters or bikes. Since the supercapacitors can be formed into unusual shapes, they can be built into the structural elements of the bike or scooter in order to not sacrifice any battery capacity. This would maximize the performance of the vehicle and help protect the batteries to maximize their operating life. There are still more applications for flexible supercapacitors that could be discussed. Robots, exoskeletons, wearable electronics, prosthetics, and smart glasses can all benefit and be further optimized.

Up until now, capacitors have not had the flexibility to be integrated into devices without having to give up energy capacity by removing batteries. Consequently, a choice between the two was often forced to be made. However, with the flexible supercapacitors, that doesn’t have to be the choice anymore. Both batteries and supercapacitors can be an option. By taking advantage of the unused free space in the infrastructure of a device, flexible supercapacitors like the CBC can be integrated to complement batteries and optimize the whole energy storage system. Capacitech was founded to bring technologies to market that enable the future. Our Cable-Based Capacitor (CBC) innovation provides the cleantech and electronics industries with new opportunities that we are very excited about. The CBC can be used where no supercapacitor has gone before, inside the w...

The shift to renewable energy is on the rise as fossil fuel reserves deplete. Learn about the growing interest in pairing energy storage with solar power, the tradeoffs that come with doing so, and how Capacitech’s flexible supercapacitor technology can help customers overcome these challenges.

Community-scale batteries are already achievable in Australia, will complement existing household batteries and will allow more solar energy to be stored in our suburbs, analysis from The Australian National University (ANU) shows.