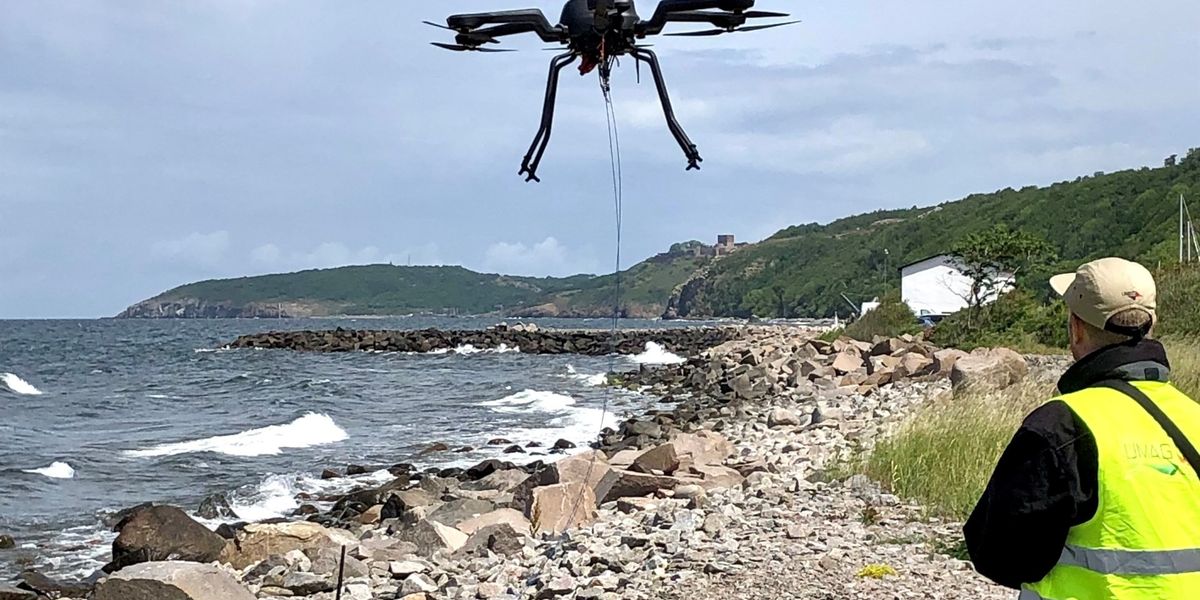 DTU spinout solves mine clearance tasks for the Danish Defence and the offshore wind turbine industry.

Magnetic technology mounted on drones can identify mines and unexploded munitions on land and at sea much more effectively than conventional mine clearance using handheld detectors. The DTU spinout company Umag Solutions has developed an ultra-precise drone magnetometer technology, and documented that in just a few days it can cover an area that either cannot be covered in conventional mine clearance operations or that it would take a month to cover.

CEO and co-founder of Umag Solutions Arne Døssing Andreasen from DTU explains that the technology opens up completely new opportunities for mine clearance in many rural areas, but also in coastal areas, where mines from World War II in particular are scattered around and create problems when installing submarine cables from offshore wind farms.

“The traditional mine clearance ships cannot detect bombs when they are close to shore because they cannot operate in shallow water. We can do this with our drones, which can also detect smaller objects than previous technologies have been able to do,” says Arne Døssing Andreasen.

Umag Solutions’ drone systems operate from 30 cm above a surface down to a water depth of ten metres, from where the magnetic sensors—magnetometers—detect very small spatial variations in the Earth's magnetic field. The researchers can then clean the recordings of magnetic background noise and system noise, and use the vast amount of data for colour maps, where you can see subtle magnetic deviations in the subsurface. These deviations can originate from metal objects, minerals in the subsurface, boulders, or changes in soil conditions.

Since its founding in 2018, Umag Solutions has worked with customers and businesses in primarily Ireland, Scotland, England, Germany, and Denmark. Most of the tasks are carried out for the offshore industry, where Umag Solutions has removed ammunition and objects from World War II in areas where wind turbines were to be built. In other Northern European countries, the company has mapped tidal surfaces kilometres wide, or solved tasks for the Danish defense’s mine clearance operators, who - in a project with DanChurchAid’s mine clearance unit - demonstrated that the technology can detect Russian landmines of low magnetism and unexploded cluster bombs.

Most recently, Arne Døssing has been to a meeting at the Ukrainian Embassy, where the ambassador has shown interest in using Umag Solutions’ technology for mine clearance in Ukrainian ports and fields. The drones also have potential as an alert system. In a current research project, Umag Solutions is investigating whether the drones in combination with machine learning can provide live data so the Danish Armed Forces can use the system when checking for mines at sea or for roadside bombs.

DTU runs research projects on drone technology development, but also projects where drones are used as a research tool. In relation to drone technology, DTU researchers work within areas such as drone control, high-precision navigation, and sensor and measuring instrument development. In particular, high-precision navigation is a key prerequisite for many drone applications if multiple drones are to work together or for measurements requiring high precision.

Researchers at DTU use drones as a supplement to, for example, manned aircraft to conduct their research. Thus, drones have been used for surveying glaciers in Tibet and work is underway to use large drones to conduct research flights in the Arctic.