Our encrypted communications might be in trouble - powerful quantum computers are coming. By fighting fire with fire though, we can use the magic of quantum physics to create so-called quantum key distribution methods and protect our data against quantum hacking. Eindhoven University of Technology is currently setting up a unique testbed to validate this technology in several societal settings, thus paving the way for a fast and unhackable quantum internet. First user case: autonomous driving. Our researchers aim to have the world's first quantum-secured autonomous driving car ready by next year.

The quantum computing age is coming, and with it the serious threat to all of our encrypted communications. Current cryptography protocols used to secure our data can be cracked by a quantum computer in no time at all (see info box below). This means that state secrets, medical records, and banking systems would all be vulnerable once the quantum computer becomes a reality.

This worrying data protection issue could be prominent within five years, according to Idelfonso Tafur Monroy, TU/e Professor at the Electro-Optical Communication group and the Center for Quantum Materials and Technology Eindhoven (QT/e). He also recognizes the particular threat to systems that require a lot of accurate control, such as autonomous driving. “For example, a hack could trick others into thinking your car is in a different location, slowing down, or changing direction,” he says. "It is even possible that your car is hacked and commandeered by someone external to the vehicle." 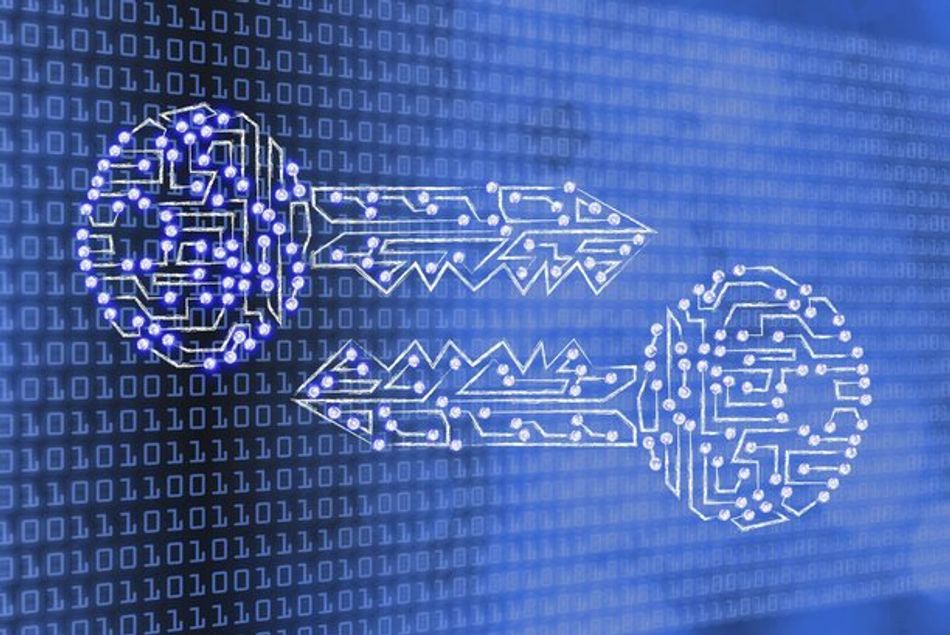 What Makes Quantum Computers A Threat To Our Encrypted Data?

A conventional computer performs operations using bits, which can be either zero or one. A quantum computer, on the other hand, uses quantum bits or qubits. Qubits can be photons, or electrons, or any system that can exist in so-called quantum states.

What is special about quantum physics is that these states can exist simultaneously. This so-called ‘superposition’ allows you to hold much more information in comparison to the bits in conventional computers.

This immense computing power is especially useful in calculations with many different outcomes: these can be done in one operation at the same time. To crack our current encryption, a conventional computer takes longer than the age of the universe to try-out every possible solution. A quantum computer tries them all at once and cracks it in the blink of an eye. The potential security problems are quite clear right?

So what can we do to prevent this from happening? One method that has been getting a lot of attention in recent years is actually using the power of quantum technologies against quantum technologies, "a quantum way of attacking another quantum technology," as Tafur Monroy refers to it. This is the aforementioned Quantum Key Distribution (QKD). 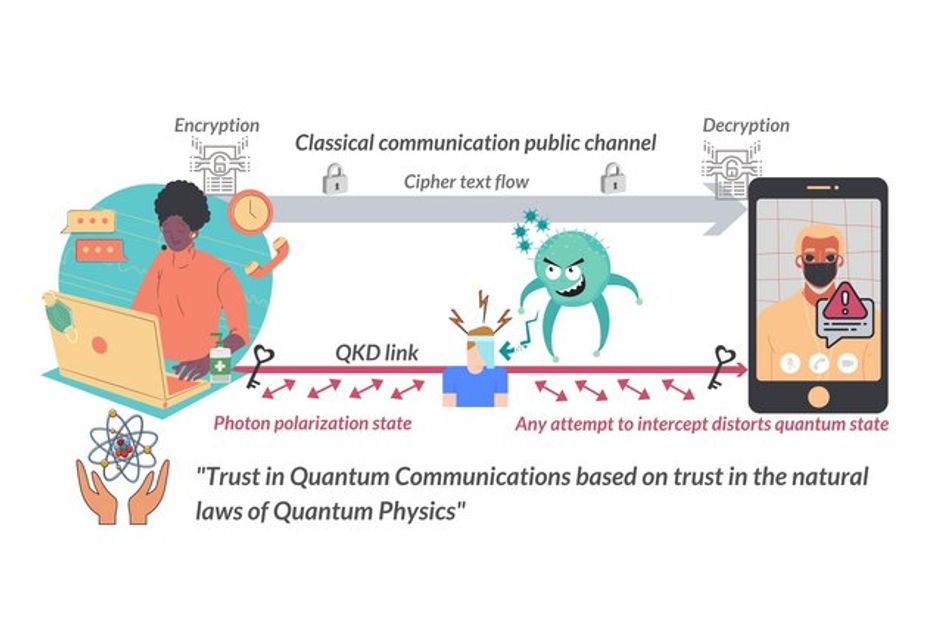 Schematic depiction of Quantum Key Distribution. The arrows refer to the polarization state of the photon. Any attempt to hack the communication results in changing those states as well. Therefore, the recipient receives photons in the wrong polarization state - which will be noticed directly. Click on the image to expand.

In QKD, quantum properties of photons such as polarization state and entanglement – wonders of quantum physics – are used to create cryptographic keys. These keys can be seen as recipes that tell the recipient of some secret data what measurements of the photons are needed to properly decode and access the data.

The strength of QKD lies in the fact that someone who tries to decrypt the data without the right cryptographic key is immediately noticed by the creator of the key and recipient even before any actual data is transmitted. The laws of quantum physics – which form the basis of operation for quantum computers – stipulate that measurements of any quantum particle have direct consequences for the particle itself. Think of the letters that make up the words of a postcard that immediately fade as soon as you read them.

Compared to other solutions against the computational cryptographic cracking power of quantum computers, QKD is already quite a mature technology, according to Tafur Monroy. "The first generation of QKD products are already commercially available, so you can already start deploying them.”

The problem, however, is that at the moment there is no existing infrastructure to determine if a QKD system is actually safe when integrated into existing telecommunication infrastructure. Tafur Monroy: “For our current cryptographic standards, we have protocols, security, and validation tests. There are even authorities that can certify whether your system is safe. There is no such thing for QKD."

Hence, Tafur Monroy is currently building a timely testbed to ascertain if a QKD system is viable and safe for societal use. “It’s not a lab, it’s not a computer, but it is the closest thing to real-world deployment, with real nodes, real fibers, real systems, and we're also going to run real attacks to test whether systems are secure." 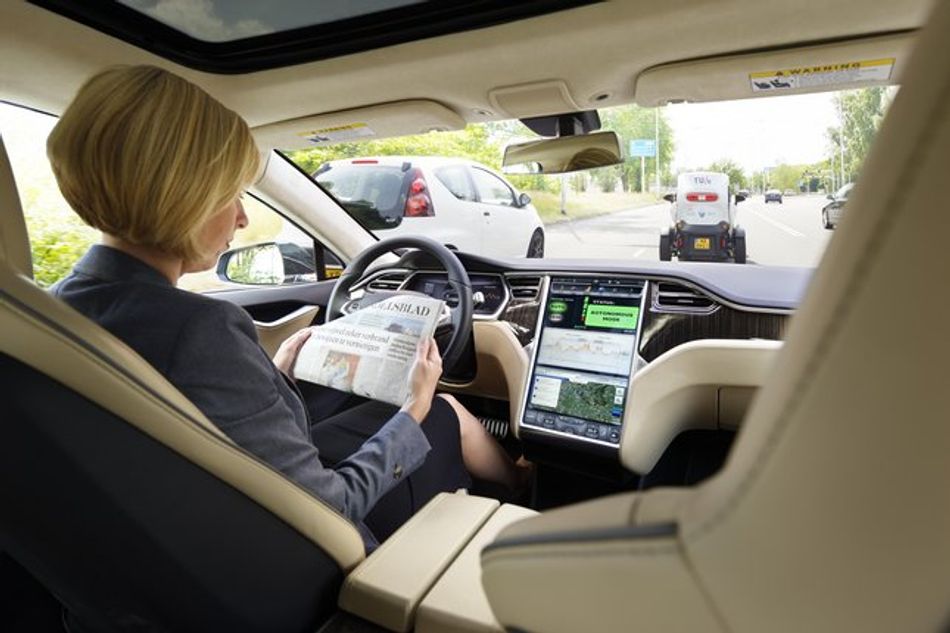 Tafur Monroy’s testbed of choice is based on autonomous driving. Existing research projects at TU/e are already conducting tests with autonomous driving cars, on the TU/e campus, on the highway between Eindhoven and Helmond, and also in the urban area of Helmond.

These cars will be connected via an on-board box to an experimental 5G network, set up by the TU/e, consisting of three antennas on campus. This is the fastest form of 5G – 100 times faster than the current 4G (from 100 Mbps to 10 Gbps) – and will probably be introduced in 2025.

“QKD will be used to secure communication between the 5G link, the cars and the edge computing nodes - local devices that process large amounts of data and are placed closer to the end-user to provide fast response times,” says Tafur Monroy. “We're securing specifically the control mechanism that says which car a data beam should follow, or whether to switch to another car.” Within the context of the EU-funded BRAINE project, the final touches are currently being put to this impressive testbed configuration. "We expect to have a fully quantum-secured 5G autonomous driving system by the end of next year.”

Robotics And Civilian Data Are Next

All elements of the testbed are connected to each other via the existing optical fiber network ring around the city of Eindhoven (diameter 110 km). This ring also connects the labs on the TU/e campus with various test locations in the region, enabling the expansion of the test bed for other applications.

Schematic depiction of the Eindhoven test bed. Next to the 5G autonomous driving project, other test locations are connected through the optical fiber network ring around Eindhoven.

For example, after autonomous driving, robotics is next on the list to be protected against quantum attacks. “We want to use QKD to secure robotic communications for industrial inspection,” says Tafur Monroy. “These robots are also connected to the 5G network and communicate with other robots in manufacturing processes.”

Another ambition is to secure civilian and governmental data in the small city of Waalre, which is also connected to the network ring. “Waalre has its own local fiber optic operator that provides information for the city hall in addition to other ICT services,” says Tafur Monroy. “Among the use cases of interest for the local operator are the use of QKD technology for data access authentication and secure long-term data storage, government secure communication.”

With such practical examples, he aims to find other interested parties who see the Eindhoven testbed as a valuable test location. "Hopefully these examples will motivate people to explore the use of this technology for other applications. We can then look into other business cases as well."

Although QKD has matured to the point that commercial systems are available, current solutions have limitations on transmission distances and key transmission rates. “To accelerate global uptake and deployment of QKD systems, miniaturization and cost reduction is also necessary,” says Tafur Monroy.

Therefore, in the long run, Tafur Monroy also wants to bridge the gap to, putting it simply, place all of these necessary technologies in a chip. “We have the knowledge and technology in Eindhoven to eventually manufacture QKD in chips – such as the photonic integration technologies – so that they also fit into a mobile phone,” says Tafur Monroy.

His ultimate dream is to play a role in the ‘certification’ of QKD cybersecurity solutions. "This would allow you can come to Eindhoven with your chip or QKD product and we can guarantee that you pass the test for quantum cryptography."

One word of advice to any quantum computer seeking to hack data or control technological systems: you better avoid Eindhoven for the next few years...

From quantum physicists to mathematicians and electrical engineers: the Center for Quantum Materials and Technology Eindhoven (QT/e), which launched in 2018, brings together various disciplines in the field of quantum technology. It now harbors around forty researchers, covering the entire ‘knowledge chain’ from fundamental quantum physics, via materials science up to device physics and cryptography.

With QT/e officially launched, national developments eventually led to the establishment of the Quantum Deltanetwork, combining the strengths of five major quantum research hubs and affiliated universities and research centers in the Netherlands.

One of the goals is to develop a National Quantum Network, which will further develop into an internationally leading platform with the latest quantum internet hardware and software. Part of this roadmap is to connect the quantum hub in Eindhoven with other hubs in Delft, Leiden and Amsterdam

Article #1 of our Connected Transport Series. How The New 5G Mobile Standard Takes Connected Driving Another Step Closer to Reality.

Article #2 of our Connected Transport Series. Sensors activate automatic braking to avoid collisions when objects are too close, and they enable headlights to pan as we turn. But high-speed transfer of data is required to keep the connected advances coming.

Towards a system of systems: Networking and communication between vehicles

Enabling vehicles to share communicate with other road participants, traffic infrastructure, and the cloud will be essential for autonomous vehicles, and could create safer, more efficient mobility and transportation.