In a new study, the prototype, which is designed to be integrated with a machine vision system, showed that it is capable of both picking and trimming mushrooms growing in a shelf system. 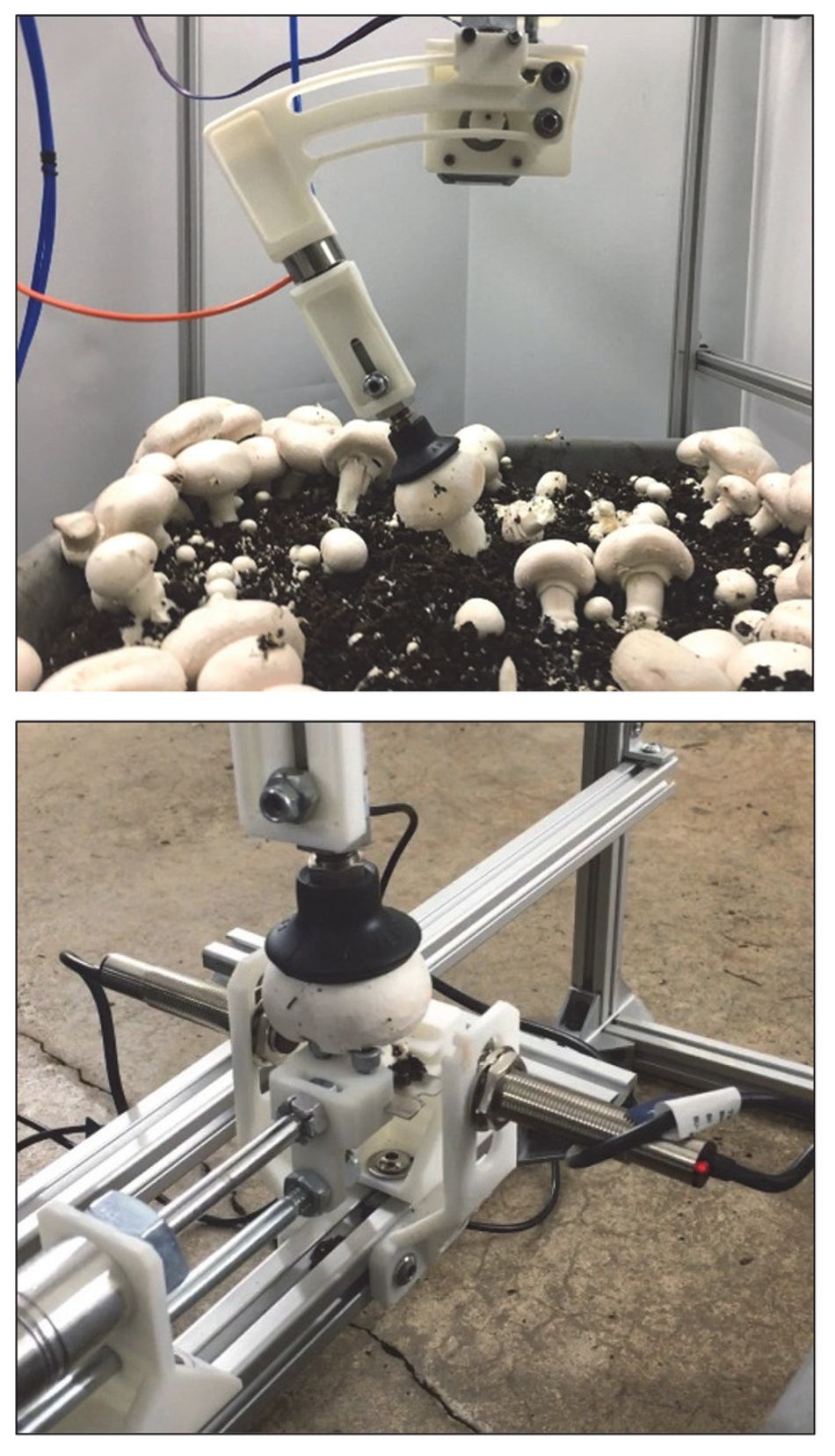 The prototype, which is designed to be integrated with a machine vision system, showed that it is capable of both picking mushrooms with a pneumatic system (top photo) and trimming them (bottom photo). Image: Penn Sstate The research is consequential, according to lead author Long He, assistant professor of agricultural and biological engineering, because the mushroom industry has been facing labor shortages and rising labor costs. Mechanical or robotic picking can help alleviate those problems.

“The mushroom industry in Pennsylvania is producing about two-thirds of the mushrooms grown nationwide, and the growers here are having a difficult time finding laborers to handle the harvesting, which is a very labor intensive and difficult job,” said He. “The industry is facing some challenges, so an automated system for harvesting like the one we are working on would be a big help.”

The button mushroom — Agaricus bisporus — is an important agricultural commodity. A total of 891 million pounds of button mushrooms valued at $1.13 billion were consumed in the U.S. from 2017 to 2018. Of this production, 91% were for the fresh market, according to the U.S. Department of Agriculture, and were picked by hand, one by one, to ensure product quality, shelf life and appearance. Labor costs for mushroom harvesting account for 15% to 30% of the production value, He pointed out. 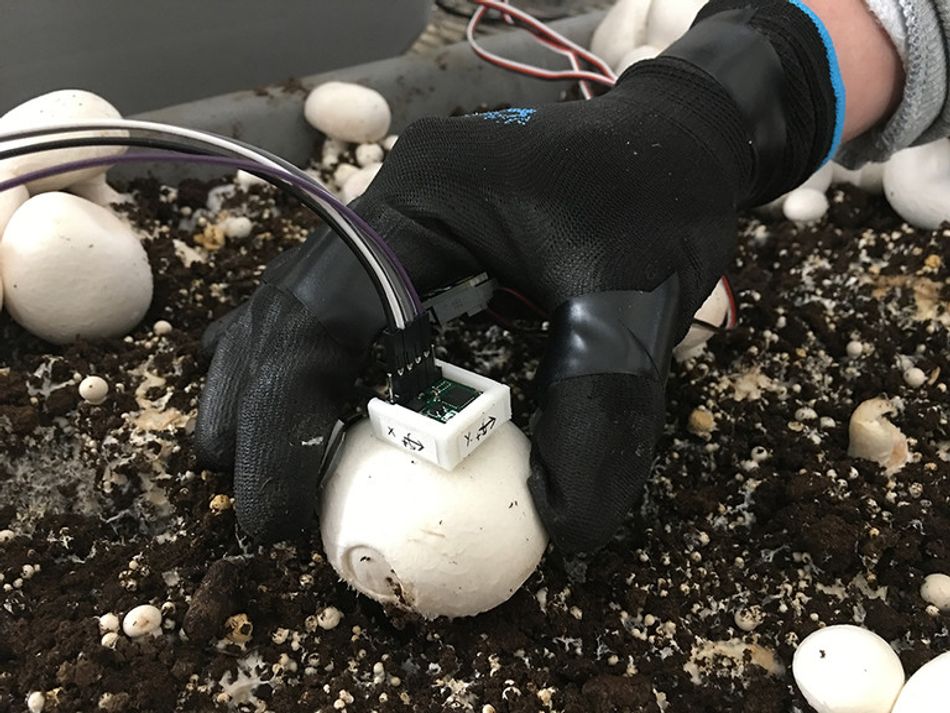 To determine forces that needed to be programmed into the robotic picker, researchers took mushroom-picking-dynamics measurements using force sensors and an inertial measurement unit. Image: Penn State Developing a device to effectively harvest mushrooms was a complex endeavor, explained He. In hand-picking, a picker first locates a mature mushroom and detaches it with one hand, typically using three fingers. A knife, in the picker’s other hand, is then used to remove the stipe end. Sometimes the picker waits until there are two or three mushrooms in hand and cuts them one by one. Finally, the mushroom is placed in a collection box. A robotic mechanism had to achieve an equivalent picking process.

The researchers designed a robotic mushroom-picking mechanism that included a picking “end-effector” based on a bending motion, a “4-degree-of-freedom positioning” end-effector for moving the picking end-effector, a mushroom stipe-trimming end-effector, and an electro-pneumatic control system. They fabricated a laboratory-scale prototype to validate the performance of the mechanism.

The research team used a suction cup mechanism to latch onto mushrooms and conducted bruise tests on the mushroom caps to analyze the influence of air pressure and acting time of the suction cup. 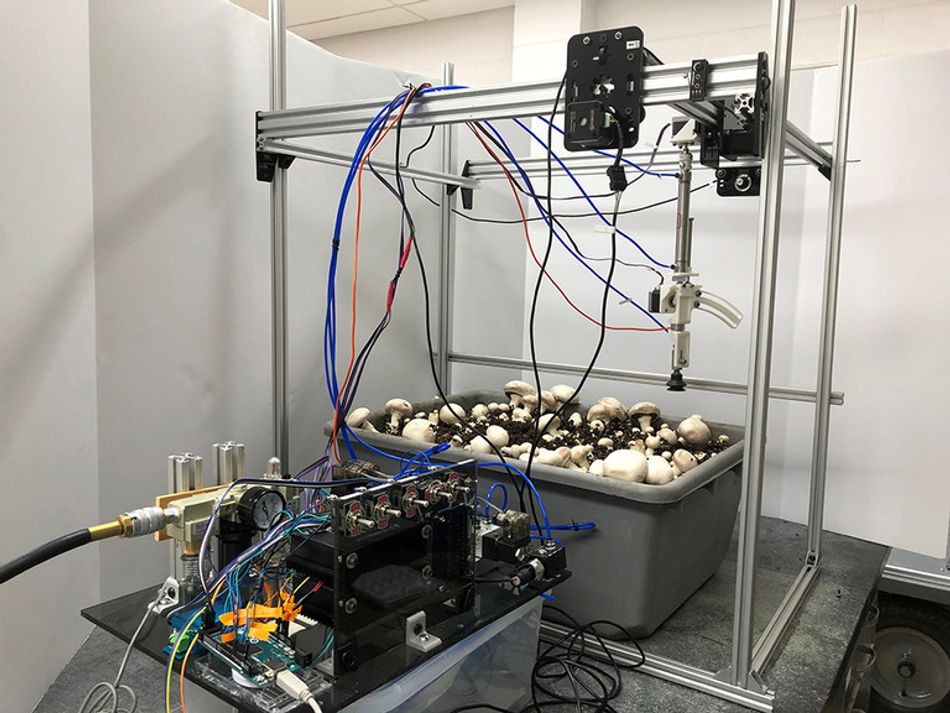 The prototype was designed to automatically pick and trim button mushrooms growing in a shelf system. The mushroom industry has been facing labor shortages and rising labor costs, so mechanical or robotic picking could alleviate those problems. Image: Penn State The test results, recently published in Transactions of the American Society of Agricultural and Biological Engineers, showed that the picking end-effector was successfully positioned to the target locations and its success rate was 90% at first pick, increasing to 94.2% after second pick.

The trimming end-effector achieved a success rate of 97% overall. The bruise tests indicated that the air pressure was the main factor affecting the bruise level, compared to the suction-cup acting time, and an optimized suction cup may help to alleviate the bruise damage, the researchers noted. The laboratory test results indicated that the developed picking mechanism has potential to be implemented in automatic mushroom harvesting. 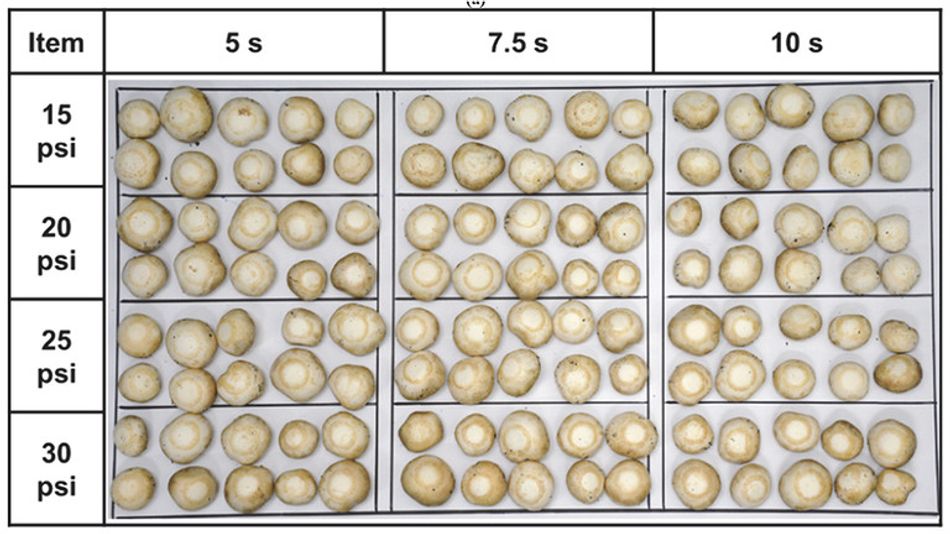 Researchers tested  bruising at different pressures used in the pneumatic system to pick the button mushrooms. This image shows comparative bruising after three days. The top row denotes how many seconds the suction cup held the mushroom. Image: Penn State

Button mushrooms for the study were grown in tubs at Penn State’s Mushroom Research Center on the University Park campus. Fabrication and experiments were conducted at the Fruit Research and Extension Center in Biglerville. A total of 70 picking tests were conducted to evaluate the robotic picking mechanism. The working pressures of the pneumatic system and the suction cup were set at 80 and 25 pounds per square inch, respectively. 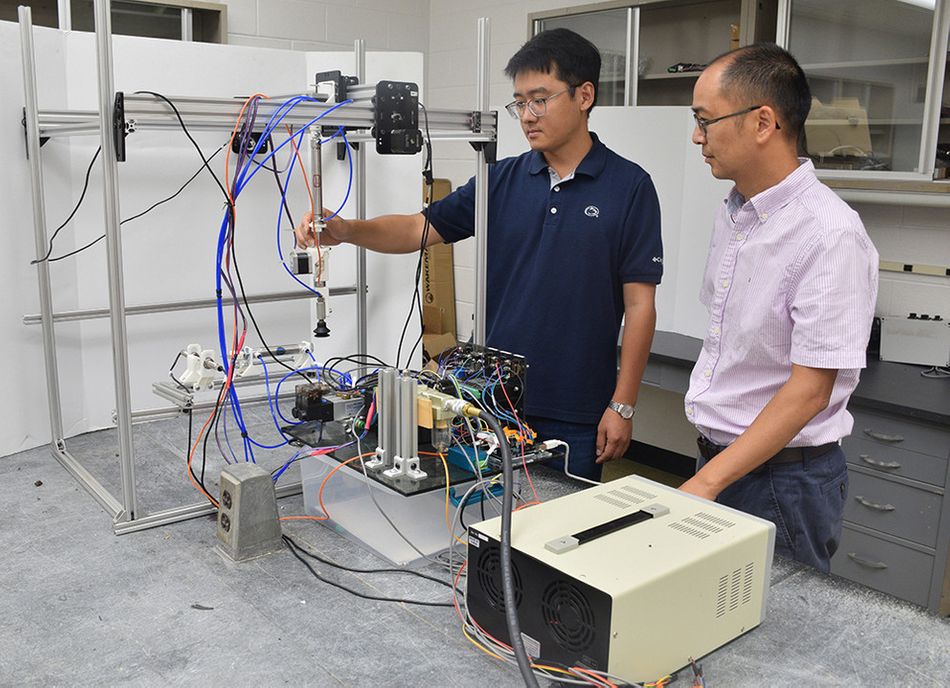 There’s a reason Penn State consistently ranks among the top one percent of the world’s universities. Across 24 campuses, our 100,000 students and 17,000 faculty and staff know the real measure of success goes beyond the classroom—it’s the positive impact made on communities across the world. Our i... learn more

Working directly with oyster farmers, MIT students are developing a robot that can flip heavy, floating bags of oysters, helping the shellfish to grow and stay healthy.

TerraClear is developing an autonomous system to remove rocks from farmland, making it easier for farmers to get their fields ready for planting.