Among specialists of the school who took part in the project are Sergey Makarov, Lev Zelenkov, Eduard Danilovsky, Polina Kapitanova, Pavel Smirnov, and Georgy Baranov, as well as two first-year students of the Applied and Theoretical Physics program – Aidar Rakhmatullin and Tatyana Filimonova. Thanks to them, the pieces were produced and the final setup assembled. 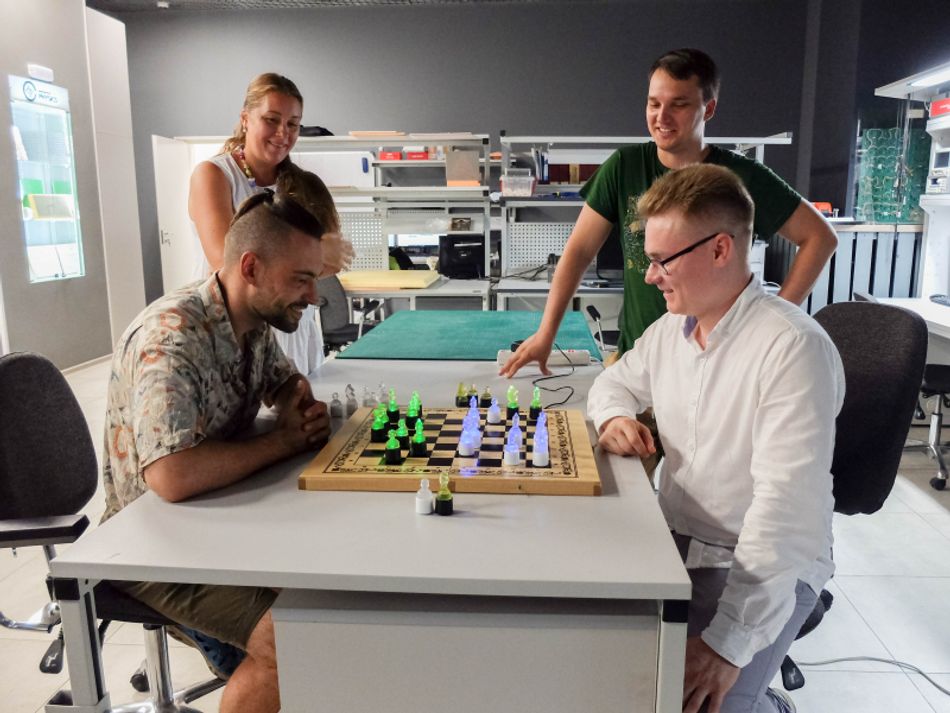 According to the creators, they came up with the idea together, but Sergey Makarov, a big fan of chess, initiated it. However, this game is popular at the faculty in general and tournaments are often held between staff and students. It took nine months to go from the idea to the the viable product – the team aspired to complete it by July 20, the International Chess Day.

“It was a team effort. We managed to encapsulate perovskites and make them glow using a standard UV light-emitting diode. Then we thought – is there a theoretical possibility of making chess pieces out of that? There were many variants and suggestions on how to turn on the diode inside of a piece without using wires. We considered various contact platforms until we decided to ask advice from our colleagues who are engaged in wireless energy transmission,” says Lev Zelenkov.

The chess project is about the merging of two fields of research: wireless energy transmission and photoluminescence of perovskite quantum dots. According to Polina Kapitanova, the device demonstrates unique results, as energy from one source is being transmitted into 32 receivers at the same time with equal efficiency. “The pieces contain light-emitting diodes that highlight perovskite quantum dots embedded into the pieces’ material. The energy is delivered to the diodes wirelessly – we embedded a big transmitter into the chessboard. It’s unique because it’s implemented on a metasurface. This allows us to create a quasi-equal distribution of the magnetic field and suppress the electric field, which is dangerous to humans. Using the magnetic field, we transmit energy to each of the receivers embedded into the chess pieces. The signal straightens up and the diode lights up, illuminating the material, inside of which are quantum dots, so as a result, we can see luminescence,” explains Polina Kapitanova.

The pieces are being lit up by nanocrystals of lead halide perovskite – a material that doesn’t exist in natural conditions because of its susceptibility to corruption from water and air. In the lab, however, perovskite is secured by polyether resins which make it as stable as possible. One of the biggest challenges when assembling the chess set was the complex form of the pieces. The scientists admit that it was hard to find the right parameters of light absorption and radiation for them. The perfect glow of entire pieces isn’t achieved yet, but the solution will be found in the next versions of the device.

The first version of the chess set will stay at the school for its students and lecturers but the team doesn’t rule out the possibility of establishing production of such chessboards as  souvenirs, given that such colorful visual representations of research attract attention towards fundamental science. 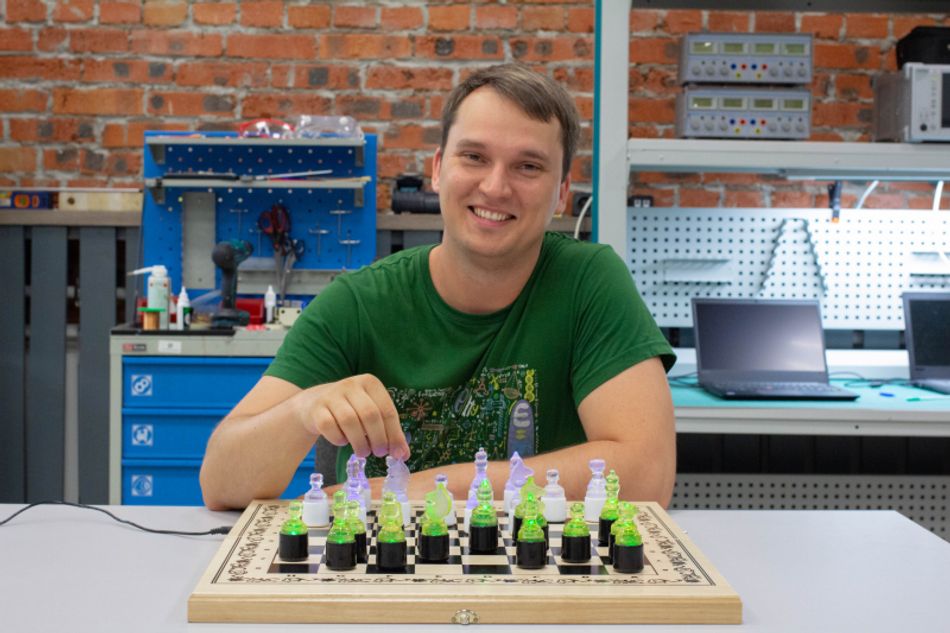 “Interdisciplinary research and the field of art & science are trending. Our suggestion to visualize the power of physics, a complex and seemingly bland science, as an art object can make it more attractive for school and university students. Shortly put, the goal of this project is to show that science can be beautiful,” says Sergey Makarov.

All rooftop solar panels look pretty much the same from the outside: same size, same thickness and even the same installation system.