LiDAR and RADAR are both remote sensing devices that are often used for the detection, tracking, and imaging of various objects.

Both sensors have assisted measurement in a lot of fields, including environmental research, space exploration, and medical discovery.

While they’re used across a broad range of industries, LiDAR and RADAR are stirring up a buzz for their functionality in the autonomous vehicle space. The discussion around which one is better has plagued the industry for a while.

Most manufacturers choose LiDAR sensors as their top sensing device. On the other hand, Elon Musk, Tesla’s CEO and a central figure in the industry have shown his preference for RADAR on multiple occasions.

Self-driving vehicles need to be aware of their surrounding environment. Often, the system that enables object detection in autonomous vehicles includes a variety of sensing devices connected through a sensor fusion algorithm, including LiDAR, RADAR, ultrasonic sensors, and cameras.

While they have overlapping goals, the simple change of the type of wave used makes their capabilities vastly different from one another.

LiDAR stands for light detection and ranging or laser imaging, detection, and ranging. While it’s a fairly new concept compared to RADAR, it’s been around since the discovery of lasers in the 1960s.

There are two types of LiDAR sensing devices, airborne- and ground-based.

LiDAR systems are dependable because they’re capable of measuring an environment with high accuracy and producing a 3D image based on the results.

How does LiDAR work?

The lasers used to detect objects in a LiDAR can either be discrete or continuous.

LiDAR sensors that use continuous waves use the phase difference of the return signal to determine the distance and characteristic of the object. For pulsed waves, we’re more interested in the amplitude of the transmitted and received signals to create a point of cloud that reflects the detected object. (Beland, 2019)

In measurement, full-waveform signals are often used in forestry, while pulsed signals have more use in other fields.

A LiDAR system mainly consists of a light source and a receiver or sensor. The source beams out light or laser, which bounces off the target and back towards the LiDAR system, where the sensor catches the pulse.

To determine the precise distance of an object, the LiDAR system calculates the time interval between the emittance of the laser and when it’s received, taking the speed of light into account.

On its own, LiDAR can catch the position, size, and shape of an object relative to the LiDAR system. However, LiDAR sensors are often paired with a GPS, an IMU sensor, or a camera to enhance their capabilities.

RADAR stands for Radio Detection and Ranging. Just as its name suggests, RADAR’s working principle is almost identical to LiDAR, except it uses radio waves instead of lasers or light.

Radio waves have a much longer wavelength compared to light waves, making radars able to cover longer distances compared to LiDAR devices. The frequency and type of radio waves used depend on the requirement of your measurement device.

The discovery of RADAR preceded LiDAR, with the first known application of RADAR dating back to the early 1900s. RADAR systems are mainly used for tracking, detection, and 2D imaging in various industries, such as environmental studies, military defenses, and the development of smart buildings.

How does RADAR work?

Similar to LiDAR, RADAR systems have two main components: a transmitter and a receiver. Here’s a schematic of a modern RADAR system. (Richards, 2014) 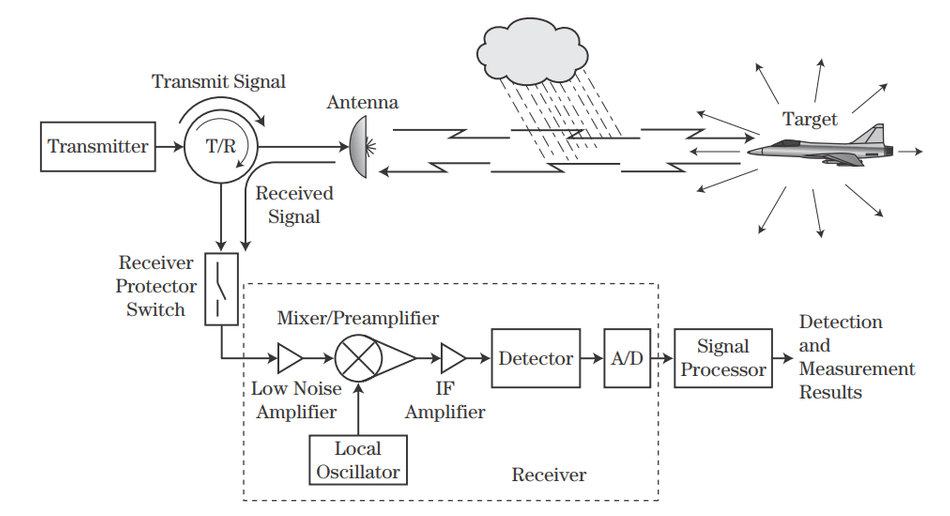 Schematic of a RADAR system. Reproduced with permission from Richards, 2014

The radio waves used by a radar system can also be continuous or pulsed, which are the more frequent option.

The transmitter and antenna in radar work together. The transmitter generates an electromagnetic wave, and the antenna sends out the wave through a medium.

Then, the signal travels through the medium and is reflected by the target back to the RADAR system, which accepts the reflected radio wave through a receiver. The RADAR processes the radio wave and determines the distance relative to the system by using the time interval between the transmission of the signal and the time when the reflected signal is received.

A RADAR system uses an antenna to transmit radio signals.

Systems with higher frequencies have lower power, higher attenuation, and more granular detection, which makes them perfect for short-range applications that need a higher resolution, such as in autonomous vehicles.

LiDAR vs RADAR: Which technology is better?

While LiDAR and RADAR have identical goals and principles, the type of wave used by both systems created a whole new level of difference between them.

Rather than which one is better, LiDAR and RADAR systems have their own place in your system with their advantages and disadvantages.

A comparison of LiDAR's and RADAR's accuracy

LiDAR uses light signals that work in the nanometer range, making LiDAR systems much more accurate and precise than RADAR systems. A lower wavelength also means that a LiDAR system can detect smaller objects, the size of targets, and create 3D images of the target. (Ryde and Hillier, 2009)

On the other hand, the resolution of RADAR images is limited by the size of the antenna used. Antennas with a bigger size produce waves with higher frequencies, resulting in images with higher resolution. Keep in mind that the requirements for your antenna also depend on the limitations of your measurement system.

In short, LiDAR is your best choice when you need to create a detailed image, while RADAR is better when constantly detecting the distance to the target is more important for your use case.

While RADAR’s accuracy leaves much to be desired, it’s much more reliable than LiDAR.

LiDAR uses light waves as a medium and is easily affected by the medium itself. For example, moisture in the atmosphere affects the performance of a LiDAR system. LiDAR systems don’t perform as well in bad weather, such as in the rain, fog, or snowstorm.

Furthermore, most LiDAR used in autonomous vehicles uses a rotating device to shoot laser pulses, which means regular maintenance is necessary to keep it working well. However, recently there are more and more options for solid-state LiDAR systems, so this might not be a concern for much longer.

RADAR, on the other hand, uses radio waves that have a much bigger wavelength, so it has enough power to cover longer distances than LiDAR.

Radio waves also have lower attenuation, which allows them to travel minimally disturbed even in poor weather. When sensors that rely on the principle of optics are compromised, RADAR is an excellent choice as a substitute, even with its low resolution.

For many years, LiDAR sensors are not an option for most manufacturers thanks to its high cost.

A high-end automotive LiDAR by Velodyne used to cost $75,000 for one car.

However, in recent years, LiDAR has been undergoing a significant price reduction with many companies working to make LiDAR systems more affordable.

In early 2020, Velodyne released a solid-state LiDAR with no moving parts for $100 called Velabit on CES 2020.

RADAR systems, on the other hand, have always been a cheaper option compared to LiDAR, with a price as low as $50 for an automotive millimeter-wave RADAR sensor module.

The price of LiDAR sensors is partially responsible for the high prices of autonomous vehicles. Most include the use of LiDAR to detect the environment for their self-driving functionality, such as Waymo, Toyota, and Uber, while Tesla continues to avoid LiDAR and develop RADAR for its self-driving cars.

Except for the type of wave used, LiDAR and RADAR are almost identical in principle. Both use a transmitter to emit a wave and use the reflected wave received by the sensor to decide the precise distance to the target.

To decide which one is better for your project, you need to decide the requirements and limitations of your measurement unit.

LiDAR uses lasers with a much lower wavelength than the radio waves used by RADAR. Thanks to this, LiDAR has better accuracy and precision, which allows it to detect smaller objects, in more detail, and create 3D images based on the high-resolution image it creates.

On the other hand, RADAR is much more robust than LiDAR with a lower starting price. While you don’t get as many details, it works in worse operating conditions and has a wider range than LiDAR.

Alternatively, you can combine RADAR and LiDAR with other sensors using data fusion algorithms to create a system with better capabilities.

So, here’s what you need to remember about LiDAR and RADAR.

Parker, Michael Alan. Digital Signal Processing 101: Everything You Need to Know to Get Started. Newnes an Imprint of Elsevier, 2017.

Dhiya Hani is a writer for technology and B2B companies. She has a Bachelor's Degree in Engineering Physics with a specialization in instrumentation, sensors, control system, and renewable energy. With a soft spot for technology and engineering topics, she continues to renew her knowledge in various... learn more

Today’s self-driving cars employ a costly, radar-like technology called lidar that uses light to spot objects in the road. Research shows how to do that with a much cheaper chip.