Photo by Loewe Technologies on Unsplash

You’re almost certainly reading this blog on a display, which is likely to consist of millions of pixels, each capable of displaying around a million colours.

It’s amazing how far flat panel displays have continued to advance in the past 20 years – nearly all displays sold today are based on either liquid crystal display (LCD) or organic light-emitting diode (OLED) technology, with a majority of production capacity dedicated to LCD.

LCDs have been around for decades in various forms. These displays consist of two parts – a backplane that provides the connections and electrodes for each pixel, and the frontplane – the liquid crystal cell itself.

Whilst there are many variants in terms of design and operation of the liquid crystal cells that make LCDs possible, the basic mechanism is based on the ability of liquid crystals to rotate the polarization of light depending on the voltage is applied. This means that, for example, light with a horizontal polarization can pass through the liquid crystal and emerge with a vertical polarization. This cell can be used in conjunction with polarizers to create a display effect.

Polarizers are thin plastic films that are used to block light of a particular polarization, and are used in many applications such as sunglasses, displays, and many optical components. If you put two identical polarizer sheets on top of each other and rotate one 90 degrees, then no light passes through the pair – one polarizer stops light of vertical polarization, and the second stops light of horizontal polarization. However, putting the liquid crystal cell between these two crossed polarizers allows you to rotate the polarization of the light that makes it through the first polarizer, so that it can now pass through the second. You have now created an electo-optical switch that can be used to selectively turn “on” and “off” different regions (for example, the segments on a calculator display, or the pixels in a TV). 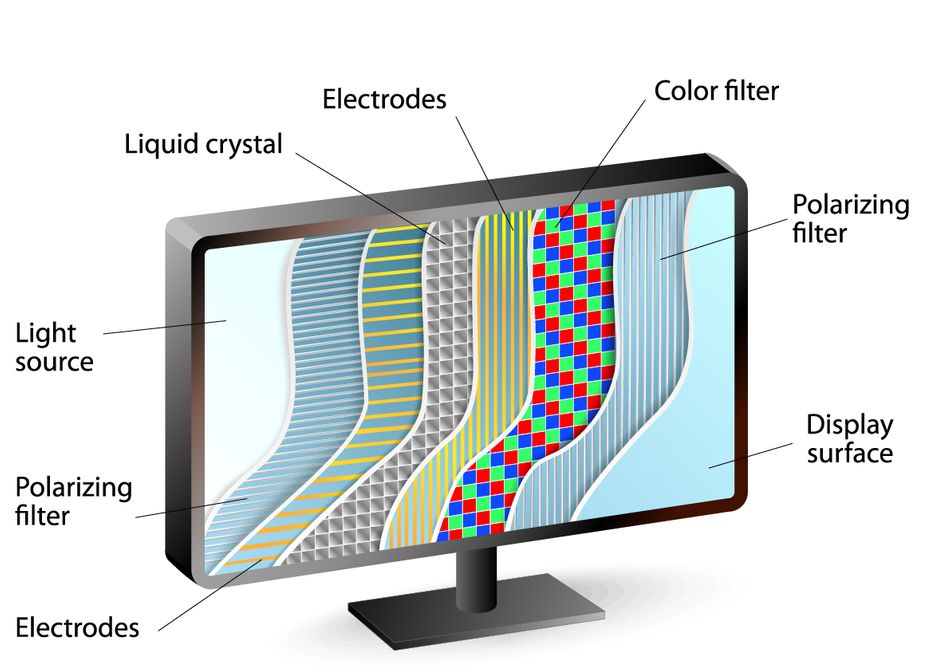 Pixelated LCDs have been around for many years. I’m old enough to remember the early smartphones in the 1990s such as the Nokia 5110 introduced in 1998. This featured an LCD display containing a whopping 4032 monochrome pixels (84pixels x 48pixels) with no greyscale – they were either ‘on’ or ‘off’. These displays were so-called “passive matrix” LCD displays – there were few enough rows of pixels so that you didn’t need transistors to drive the display – having few pixels that only went black or white (no grey) meant that video rate could be achieved and crosstalk could be minimised.

Naturally there was pressure to improve the display performance by making it higher resolution (i.e. making the pixels much smaller) and achieving colour and greyscale. This meant that the pixel count increased from thousands to hundreds of thousands and today there are millions of pixels in each display, each controllable to hundreds of grey levels. In order to control this many pixels accurately and independently, transistors are used. ‘Passive matrix’ therefore rapidly shifted to ‘active matrix’, where each pixel was actively controlled by its own transistor circuit.

There are different transistor circuits that can be used depending on the type of display, but in the most common circuit there is just one transistor controlling each pixel - acting like a light switch for that pixel, or perhaps more accurately, like a dimmer switch. Each transistor allows its respective pixel to be set to a particular brightness for the duration of a single frame of the video. The transistors therefore have two functions: to allow millions of pixels to be controlled at video rate, and to avoid crosstalk between the pixel (avoid the state of one pixel ‘upsetting’ its neighbour).

The transistors used in displays have historically mostly been made of silicon – and the high temperatures of silicon processing are one of the key reasons why displays are manufactured on glass.

What we have developed is a transistor that is made of organic polymers, which can be processed at much lower temperatures and is inherently flexible. These transistors perform exactly the same function as the silicon ones that they replace, but because of their low manufacturing temperature (100°C), they can be built directly onto plastic films, giving the same performance while allowing conformed and shaped displays. We have called these displays Organic LCDs (OLCDs).

OLCDs have the same structure as glass LCDs with the benefit of being thinner, lighter and shatterproof. They work in the same way as glass LCDs and are manufactured using the same techniques and equipment. With LCD being the dominant technology today, OLCD is the next logical step for display manufacturers and end user companies in moving away from flat screens towards novel display shapes and designs.

FlexEnable’s organic electronics platform and high-performance OTFT materials enable low cost, glass-free flexible displays, sensors and optics that can be conformed and shaped to almost any surface. We work with display manufacturers, OEMs and Tier 1 companies to bring these ground-breaking techn...

Plastic substrates for flexible displays are well known for their mechanical benefits such as thinness, lightness and flexibility, but their optical advantages are less cited.

The surface area devoted to displays in vehicle interiors is growing rapidly driven by increased vehicle automation and connectivity.