Difference between active and passive filters

Imagine being an audio engineer who has just recorded a take of one of the best vocals of your entire career, but the recording has a ton of unwanted high-frequency noise that can’t seem to be eliminated, or an electrical engineer perplexed by the high-frequency distortions in the dc output of your latest rectifier. Both these situations, despite their differences, warrant the same solution, a filter. A filter is an electric circuit that affects the ac content of the electrical signal that is being fed through its input. In the case of the audio engineer, he’d employ a filter to remove the high-frequency noise from his recording, while the electrical engineer would employ a different filter to attenuate (reduce) the distortion in her output voltage. In order to be able to determine the type of filter to be used, it is important to discuss the types of filters that are commonly employed.

Thanks to the work of French mathematician Joseph Fourier, it is now known that any periodic signal can be expressed as a combination of sine and cosine waves, whose aptitudes can be determined by analyzing the signal. This implies that any given periodic signal can be demonstrated to consist of sine and cosine waves of certain frequencies and that these individual frequencies can be affected in order to change the characteristics of the entire signal. Hence, filters can be characterized by their effect on different frequency components of a signal. The most common types are– low-pass, high-pass, band-pass, and band-reject (or notch) filters.

As the name suggests, a low-pass filter allows frequencies that are lower than a certain frequency to pass through attenuated. This point is called the cut-off frequency of the filter. Any frequency component of the signal above the cut-off frequency will be attenuated to a certain value determined by how the filter is constructed. A simple example of such a filter would be hard walls that attenuate high-frequency components of an audio wave. This is precisely the reason why low-frequency notes of any audio are more legible in the adjacent room.

A Band-pass filter allows a band of frequencies to pass through while attenuating the rest of the signal. It can be imagined as a combination of high- and low-pass filters, with the cut-off frequency of the low-pass filter greater than that of the high-pass filter.

There are two aspects of a periodic signal, namely, gain and phase. Gain refers to the amplitude of a signal, which is measured in dB (or decibels). Phase, on the other hand, relates to the time delay of a signal with respect to its original waveform. This can be better explained via a diagram. Figure 6: Phase of a sine wave

Although the language used to describe filters suggests that they only attenuate/boost the gain of a signal, they also affect the phase of the individual frequency components in a signal. For instance, a low-pass filter not only attenuated the frequencies above its cut-off but also inverts their phase. This is the reason why filters have gain as well as phase response plots. These are plots that show the relation between the input signal frequency and the change in their gain and phase due to the application of a filter. Figure 7: The phase response of a low-pass filter

The simplest of all filters are the ones built using just resistors, capacitors and inductors. Such filters are called passive filters, as they are constructed from passive components. In electronics, passive components are those which do not produce energy of their own. They are only capable of dissipating energy (in the case of resistors) or storing energy (in the case of inductors and capacitors). Additionally, their output cannot be altered using a power supply. For example, the following is the construction of a simple RC high-pass filter:

A low-pass filter can be realized by simply changing the output connections, like so:

The following is a simple band-pass filter using an RC network:

Note how it is built by cascading high- and low-pass filters:

The same filter circuits can be built using RL networks. For example, an RL low-pass filter:

RC networks are the preferred construction for filters, as the filters can be implemented within a much smaller footprint. Inductors are large in size, even for small capacities, and contribute to system losses, while also being more expensive.

Although they are simple to implement, passive filters have a few drawbacks. For example, the pass-band gain of passive filters is not zero. This means that the signal decreases in intensity after passing through a passive filter. Also, when we cascade passive filters to increase the slope, it causes a further loss in the amplitude, a phenomenon termed ‘interstage loading’. Additionally, the load connected to the filter can change its cut-off frequency. These drawbacks have led to the development of active filters.

Shown below is an active low-pass filter: 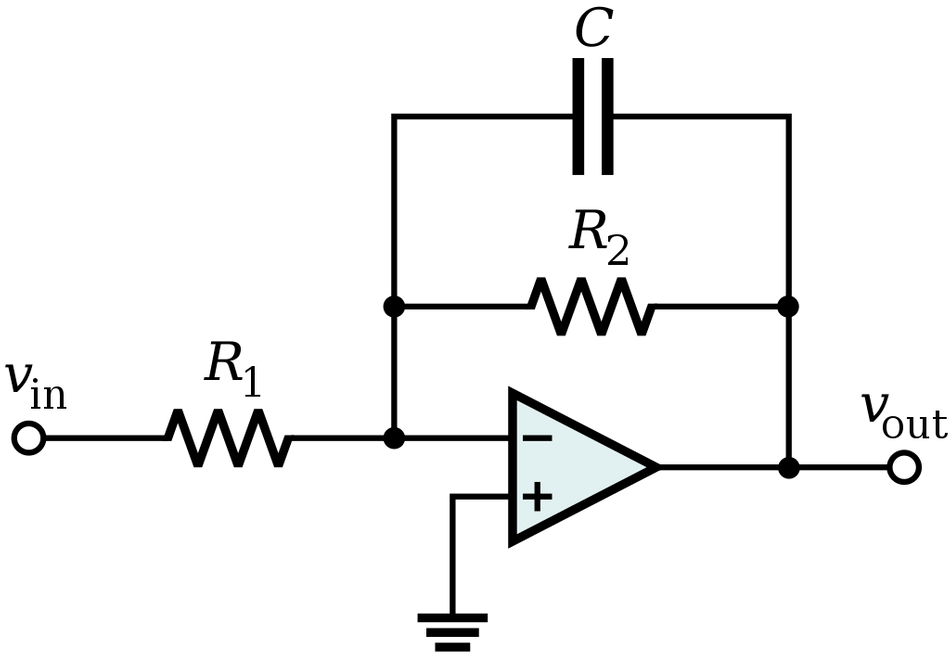 Active filters have a 0dB gain for the passband, meaning that they do not attenuate the signals in the passband. They have high input and low output impedances, which correspond to two advantages - one, the load impedance doesn't affect the performance of the filter, and two, cascading multiple filters do not cause a decrease in gain, or it mitigates interstage loading. These characteristics make them perfect for cascading. Since they are active devices, they can be configured to boost the signals in the pass band.

The difference between active and passive filters

Will power cords go the way of land lines?

The technology behind the world’s smallest power converter has been developed by researchers at DTU. Three of them have now founded a company that will produce and sell the small converters and contribute to greater sustainability of everyday electronics.

Will power cords go the way of land lines?

As NASA prepares to send astronauts back to the Moon to live and explore, capabilities for space-based manufacturing of sensors, circuits, and other electronics will become increasingly critical. Recent microgravity flights have helped to advance cutting-edge methods for 3D printing of electronics