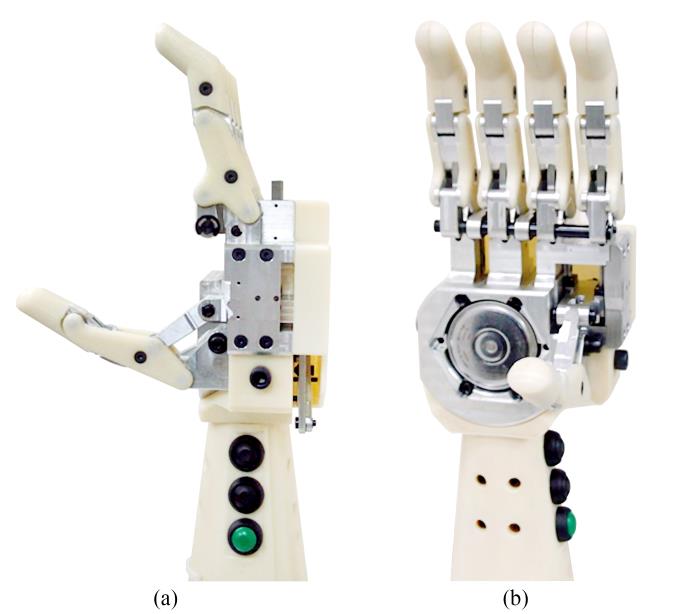 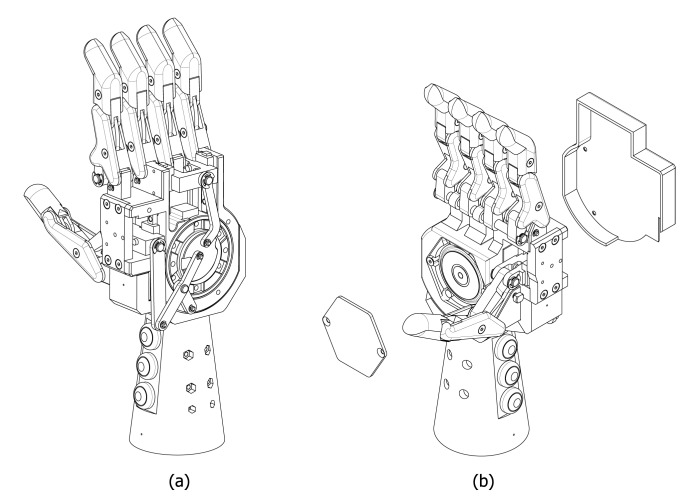 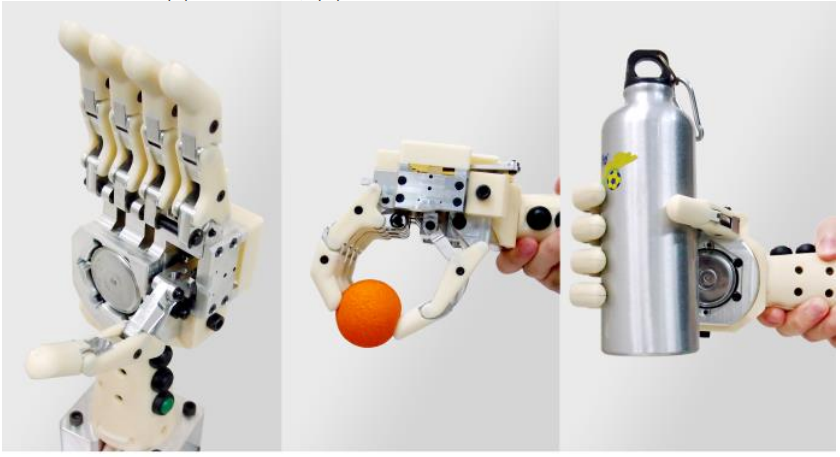 This prosthetic hand is capable of performing one neutral position and two grip patterns that are dominant in daily life tasks. Different move patterns are achieved through the use of multiple sets of rigid four-bar linkages which provide different motions to fingers and thumb when the mechanism is actuated in the opposite direction.

In this research, we propose a new concept of mechanism that uses the ability to actuate in both directions of electrical motor to provide different hand motion outputs. An actuator is placed inside the hand with rotational axis perpendicular to the palm, and this mechanism connects to four fingers and separately to thumb as in Fig. 2. 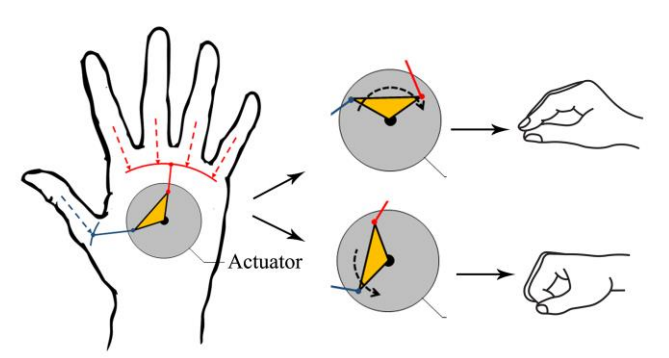 Figure 2. Prosthetic hand mechanism concept. An actuator is placed within palm. The mechanism connects to four fingers and separately to thumb. Precision grip and power grip would occur when mechanism is actuated in different directions.

Human fingers have three joints, whereas thumb has two joints outside the palm. This allows fingers to curl and wrap around objects with stability. In prosthetic hands design, fingers with three separate rigid linkages like human fingers may not have satisfying functions that justify with the complexity. Fewer joints and less degrees of freedom are more practical and feasible.

One degree of freedom prosthetic fingers with two joints coupled together have been used for a long time because they could provide adequate function and cosmetic appearance. For example, the Bebionic hand uses four-bar linkage with a linear motion plastic rod connected to distal link, and the iLimb hand uses two rigid linkages connected by a tendon driven through bearing surface . 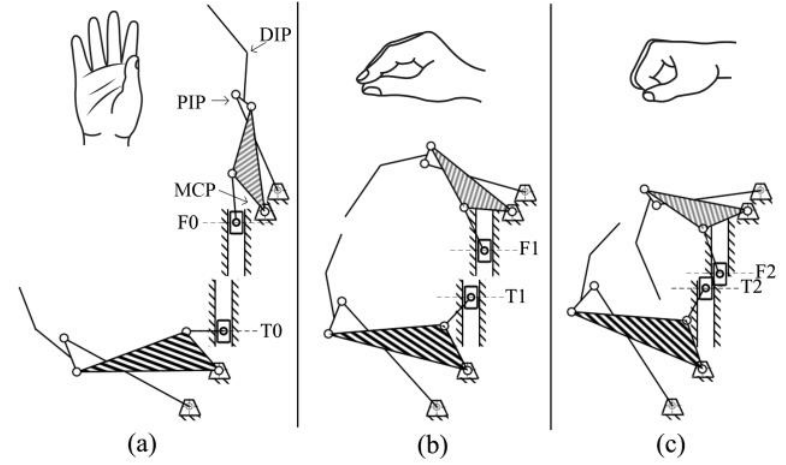 There are certain similarities in finger mechanisms found throughout many prosthetic hands. Joseph T. Belter measured the angle ratio between the Metacarpophalangeal joint (MCP) and the Proximal interphalangeal joint (PIP) of commercial prosthetic fingers to be between 1.09 and 1.27.

This research designs one degree of freedom prosthetic fingers and thumb with MCP and PIP as the rotating joint. Distal interphalangeal joint (DIP) is fixed with intermediate phalange at 40 degree angle. The MCP/PIP angle ratio is 1.15, which allows fingers and thumb to perform both precision and power grips. Each finger and thumb contains 3 rigid links in the form of four-bar linkage with an additional drive link connected from distal link to move on a prismatic joint as in Fig. 3. 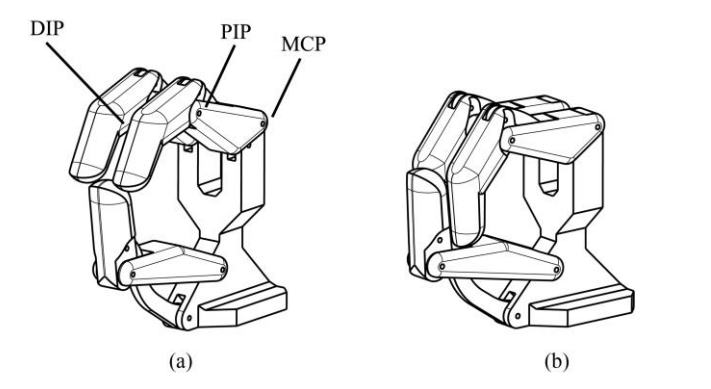 Figure 4. Index, middle, and thumb mechanisms. Each finger is a four-bar linkage which has PIP and MCP as rotating joints. (a) Precision grip position, (b) Power grip position.

All four fingers (index, middle, ring, and little finger) have identical dimensions for the purpose of less design complexity. Index and middle finger tips would touch the thumb tip if both fingers and thumb are flexed simultaneously as in Fig. 4a, whereas the finger tips would touch the inside of the palm if fingers flexion occur earlier than thumb flexion as in Fig. 4b.

This research proposes a design of hand mechanism which could provide different motions of fingers and thumb when actuated in each direction, with a mechanism comprised of 2 sets of rigid linkages separately connected to four fingers and thumb. 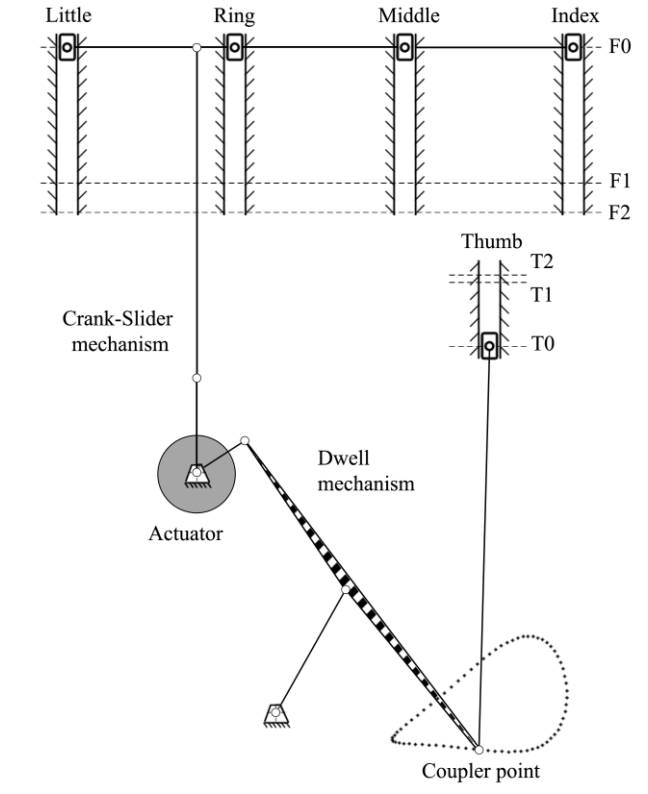 This dwell mechanism output motion is similar to a camshaft but consists of only rigid linkages and joints which have less wear from friction than camshaft design. From Fig. 5, Line F0, F1, and F2 represent finger prismatic joint positions corresponding to each grip pattern, which is open hand, precision grip, and power grip, respectively, whereas line T0, T1, and T2 represent thumb prismatic joint positions of each grip pattern in the same manner.

After the mechanism concept is decided, mechanism synthesis process is required to determine the dimensions of mechanism with desired motion. This synthesis process starts with the first set of mechanisms connected to four fingers which must have identical output motion for both actuated directions; this type of motion could be achieved by a simple crank-slider mechanism. The mechanism which could fit into hand space and have high mechanical advantage is designed as in Fig. 6. Figure 6. Fingers mechanism connected to four fingers. This mechanism provides identical motions for each actuated direction. Line F0, F1, and F2 are positions of prismatic joint of mechanism at each grip pattern.

The second set of mechanisms is the thumb mechanism which uses coupler point of four-bar linkage mechanism to achieve different outputs for each actuated direction. The dimensions of this mechanism must be computed to achieve desired performance.

In this computation process, design parameters which have important effect on mechanism motions are required to be computed for the best possible outcome. These parameters, such as linkage lengths, positions, and angles are defined as in Fig. 7. MATLAB Computational program was used to compute these design parameters under constraints to achieve optimum objective function value. Figure 7. Design parameters such as link lengths, positions, and angles are defined on thumb mechanism.

The second objective function is ThumbDelay, which represents the delay in motion of the thumb to let finger flexion to occur first without contact between thumb and fingers during power grip pattern. This parameter is defined by the travel distance of thumb mechanism at instance when fingers mechanism reaches F1 position during power grip execution.

In this instance, if the thumb mechanism reaches the T1 position, both fingers and thumb would touch each other, thus it would be impossible to perform power grip. As shown in Fig. 9, the thumb delay value is computed by dividing traveled distance (TD) by total distance (T01) as in (2). With this definition, a thumb delay value of 1.0 means that fingers and thumb tips would collide with each other and perform a precision grip instead of a power grip as in Fig. 10a, whereas a value of 0.6 means that the thumb would dwell and let fingers flex in first, as in Fig. 10b.

The selected thumb mechanism is combined with the fingers mechanism to become the hand mechanism that is connected to all fingers and thumb as in Fig. 13. The coupler path of this mechanism could provide different thumb motions when moved along different paths with each actuated direction.

For precision grip, the mechanism is actuated to the clockwise direction. Both sets of mechanisms then move fingers and thumb linkages toward the F1 and T1 positions simultaneously, in which the index, middle and thumb tips would touch each other, as in Fig. 14. 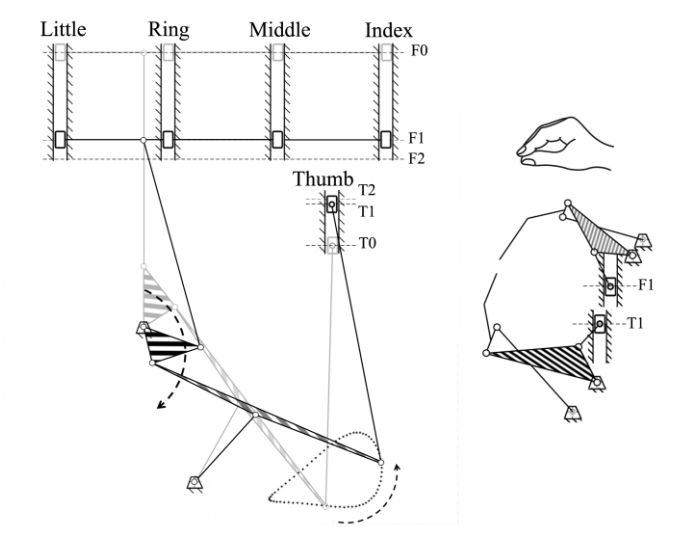 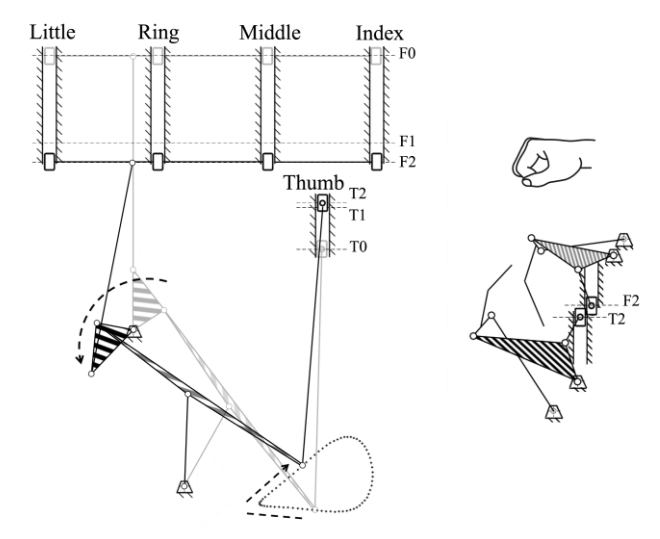 Figure 15. Hand mechanism when performing power grip. Thumb mechanism flexion is delayed due to longer travel distance of coupler path; fingers flex in first then followed by thumb flexion touching with the back of the index & middle fingers to provide stability.

Describes the design of the prosthesis, mechanism synthesis, and achieved performance.