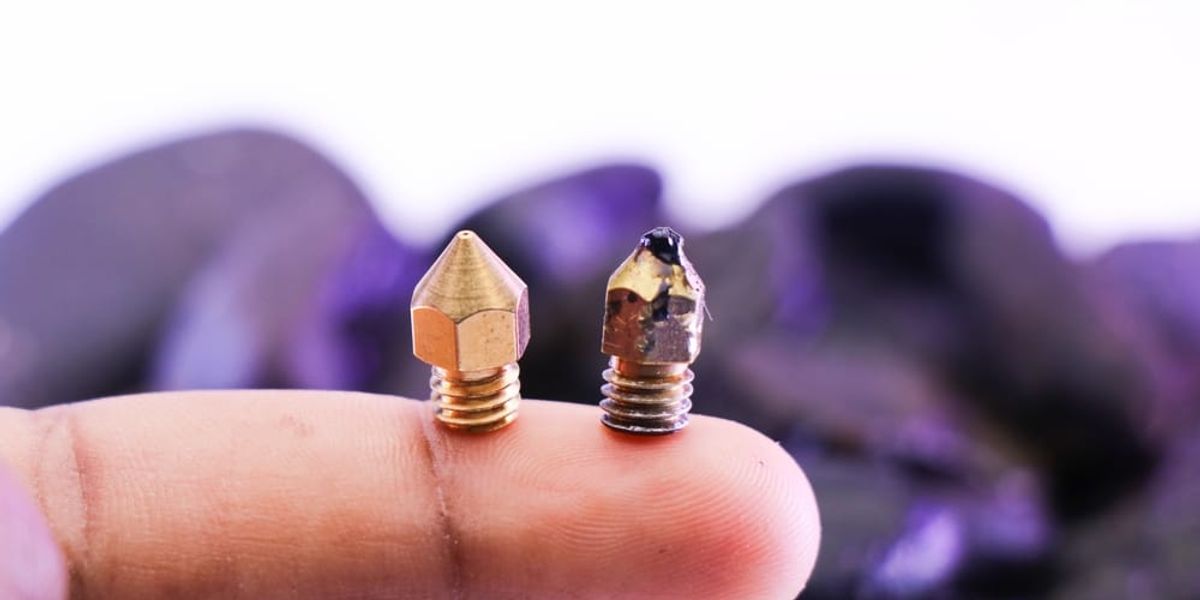 Filament residue can build up on the outside of a nozzle

Good 3D prints have their individual layers firmly attached to each other. But what should you do when improperly extruded filament sticks to nozzle, bed, and other places it shouldn’t end up?

3D printing filament is sticky by nature. Without proper adhesion, the first layer of a build wouldn’t stick to the build surface, and subsequent layers wouldn’t stick to each other. A print without a bit of stickiness would be no print at all.

But since molten print material can easily adhere to other surfaces, it can sometimes stick too firmly, or worse, stick to things it isn’t meant to stick to. A case in point is the phenomenon of over-adhesion: this is when builds get stuck on the print bed, and then require a great deal of scraping that can end up damaging the build surface. Another stickiness-related issue is when filament sticks to nozzle surfaces — interior or exterior — often by curling back in on itself after it leaves the nozzle opening. This is a very common problem that can be caused by many factors, from clogged nozzles to improper extrusion temperatures.

Why does filament stick to your 3D printer nozzle?

Almost all FDM printer users — even beginners — will have experienced it. A wad or strand of solidified filament stuck to the tip of their nozzle after a print, often curled around from the nozzle aperture. Sometimes the excess material can be easily removed; sometimes less so. Either way, it’s an undesirable occurrence that requires cleaning up before the next print can begin.

So why does it happen? In an ideal world, your extruder should deliver just the right amount of filament to the nozzle before it makes a travel movement or finishes the final layer of the print, allowing the hot end to then retract cleanly with no residue, buildup, or mess.

In reality, this doesn’t always happen. Filament sticks to nozzle surfaces for many reasons, including clogged nozzles and incorrect extrusion temperatures. Some of the more common causes of filament sticking to your nozzle include:

How to stop filament sticking to the nozzle

Diagnosing the cause of the filament sticking to the nozzle can take a bit of trial and error, and may involve attempting various fixes. Below are some of the most common and proven solutions for when filament sticks to nozzle surfaces.

A clogged nozzle also produces symptoms like stringing, missing layers, or clicking sounds during extrusion. If you notice these symptoms alongside filament sticking to the nozzle, then a blockage is the most likely culprit.

There are a few ways to unclog a nozzle, explained in full in our guide cleaning 3D printer nozzles. These include:

Decrease distance between nozzle and bed

If your nozzle is not blocked, then material may be sticking to it because it is too far from the print bed. A large gap reduces the pressure between the filament and its target, causing it to wrap around the nozzle instead of sticking to the build. Adjustment of nozzle height can be done in two ways: either by calibrating it as part of the bed leveling process (which can be done using a piece of paper) or by adjusting the Z-offset.

If you regularly end up with filament residue on the nozzle regardless of the type of filament, you might want to try calibration of the nozzle height during bed leveling. This is an essential piece of 3D printer maintenance anyway, so it is worth carrying out even if you suspect that there may be other causes of the nozzle residue. Some mid-range or premium FDM printers even have an auto bed leveling feature, which significantly speeds up the process. Low-cost machines like the Creality Ender 3 require manual bed leveling.

If the problem only occurs with specific materials, you can try lowering the nozzle height for that particular material by adjusting the Z-offset in your slicer (e.g. Cura) or directly on your 3D printer’s interface. Z-offset tweaks the nozzle height relative to its normal zero position, allowing you to “override” the initial nozzle height to accommodate differences in material behavior. Many printers allow for Z-offset adjustments during printing of the first layer, allowing you to visually assess how well the layer is printing before making the adjustment. 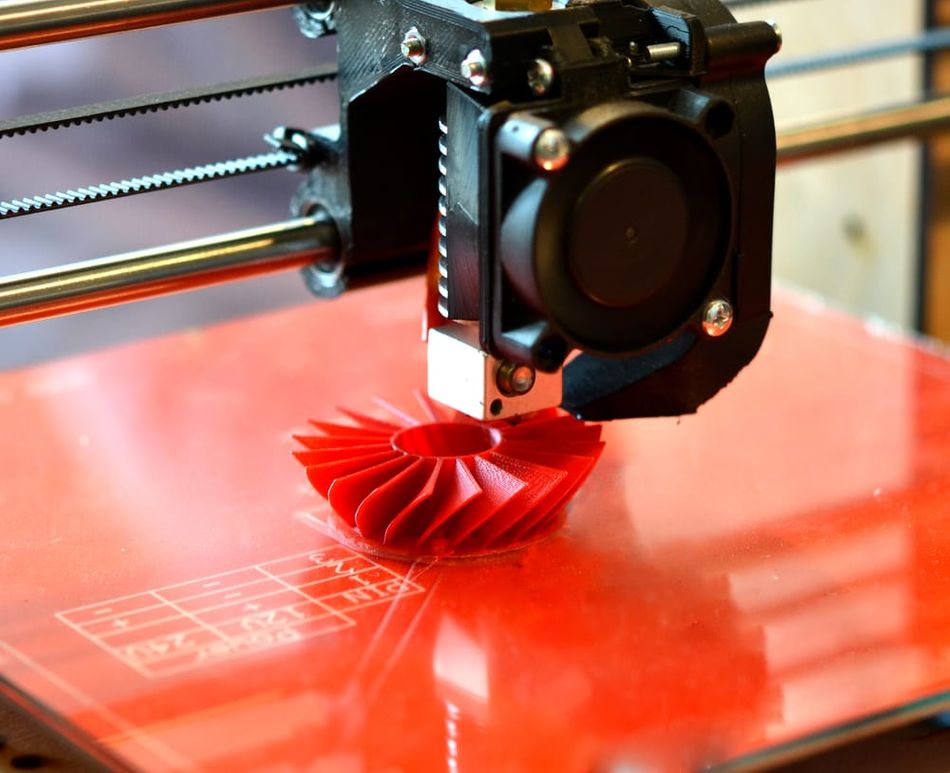 Filament failing to make it beyond the tip of the nozzle can be an indicator of poor flow, which can be caused by an insufficient nozzle temperature. By gently increasing the nozzle temp (in increments of 5°C), you may be able to tease the filament fully out of the nozzle and onto the build below. Many filaments have a range of about 40 °C in which they can print successfully; aiming for the upper end of this window can potentially mitigate filament buildup issues.

However, remember that high-temperature printing can have adverse effects on the material such as oozing and stringing, which may be just as detrimental to the print as the initial problem. And going well above the recommended printing temperature can even cause the filament to burn within the hot end, potentially causing a nozzle blockage.

Material flow can also be improved by using your slicer’s flow rate or extrusion multiplier setting. This setting instructs the extruder to feed more or less material to the hot end to accommodate for differences in material diameter and other factors.

Filament is more likely to get stuck to the nozzle if it is not adhering to the print bed during the first layer. Adhesion can be improved in a few different ways.

Bed adhesion can be improved by adjusting the surface upon the build plate. One option is to use a sheet of material (such as PEI) on top of the glass bed, while another is to apply a sticky substance such as glue stick or hairspray directly onto the existing build surface. Certain types of tape — painter’s tape and kapton tape, for example — also make good build surfaces when applied in strips onto the existing surface.

Another way to improve bed adhesion is to increase the temperature of the heated bed. This allows the extruded material to remain in a more liquid state for longer, giving it time to properly attach to the print bed before it solidifies.

Many default slicing profiles will instruct the cooling fans not to cool the first few layers of a print, thus helping adhesion to the bed. However, if these initial layers are being cooled, try turning the fans off to see if the filament sticks to nozzle surfaces less frequently.

Nozzles with worn interior surfaces may eventually start to produce uneven results, including filament curling up or getting stuck to the exterior surface. Hard filaments (such as composites containing glass or carbon fibers) are particularly damaging to ordinary brass nozzles; if you use such filaments regularly, you might need to upgrade to a hardened steel nozzle.[2] 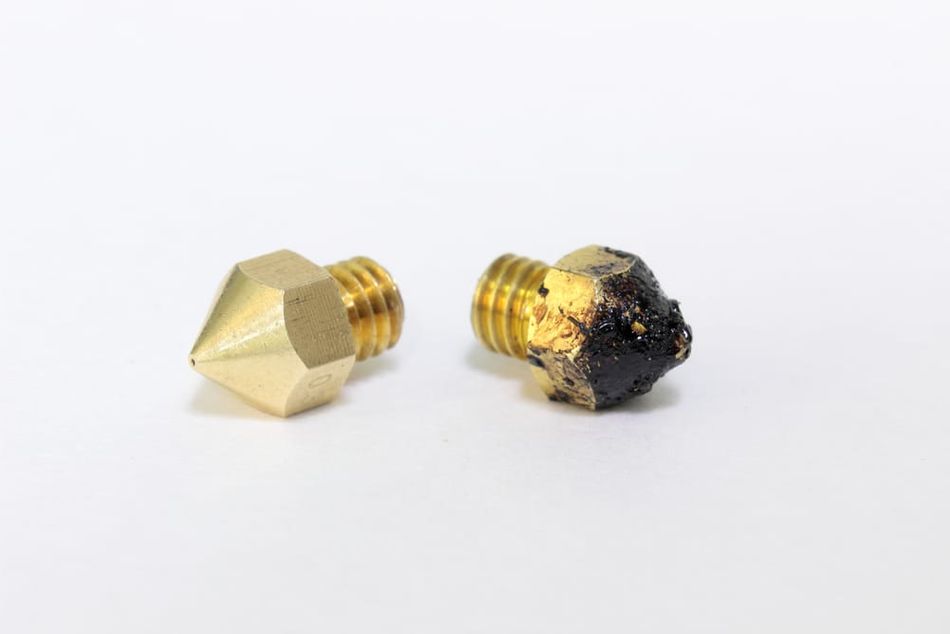 A new nozzle (left) may perform better than a worn one

Troubleshooting for different types of filament

Virtually any 3D printing material can create filament buildup in or around the nozzle. However, different materials behave in different ways, so some respond better to certain treatments than others. This section looks at how to combat the issue in question for three common FDM materials.

PLA filament is widely used due to its affordability, as well as its rigidity and low temperature demands. If PLA filament ends up sticking to the nozzle, the following methods are recommended for solving the problem:

ABS filament is tougher and more flexible than PLA, but is susceptible to various printing issues, including filament sticking to the printer nozzle. Ways to prevent ABS nozzle residue include:

PETG is a versatile alternative to PLA and ABS that is favored for its good tensile strength and availability in opaque and translucent colors. If your spool of PETG ends up causing nozzle material buildup, try the following:

Most printer users will experience filament sticking to the nozzle at some point. As we have seen, there are a few reasons why it can happen, and some of these causes are not particularly related to one another.

To take a pragmatic approach, it may be most efficient to start with blockage inspection and bed leveling. Although it might not fix the issue immediately, these are both prudent steps to take for general printer maintenance. If you have a blockage or a poorly calibrated print bed, you might not need to change your print settings at all.

Once those steps have been taken, you can start experimenting with other solutions like build surface adjustment, raising the printing temperature, and decreasing the nozzle height. All of these methods have been proven to reduce nozzle material buildup.

FFF vs FDM: Is there any difference?

What are manipulator robots? Overview of types and applications

Discover the story of Fabien Bruning.

Do you find it challenging to understand the potential 3D printing holds for your organization? It can be easier to understand its benefits by studying real-world cases.