The Motors Inside Autonomous Robots

Autonomous Robots use a variety of unique dc motors and gear motors to carry out their multitude of operations. ISL Products explains how and where these dc motors are used.

Prepare For The Robot Revolution

Autonomous Robots are becoming the new normal as they get integrated into industrial settings as well as our everyday lives. It’s not all robot arms and sci-fi security bots though, a lot of current autonomous robots resemble normal warehouse objects like conveyor belts and palette jacks. Manufacturing and distribution facilities are incorporating Autonomous Robots into their workflow more and more. Delivery services like Amazon, UPS and food delivery services are beginning to use drones and other AGV (automated guided vehicles) to deliver items to your front door.

As these automated devices rise in popularity, the demand for them to carry out different tasks increases. One of the most critical components within any autonomous device is the DC motor or gear motor. There are many different types of motors, each of them excelling at specific tasks. To better explain how and why certain motors are selected when designing autonomous robotics, let’s look at what differentiates them and how they are used.

Brushed Motors: The most common type of DC motor and has been around the longest. They’re great for a variety of tasks and are easy to operate due to their simplicity. Their low cost relative to other types of motors makes them a popular choice. To increase the controllability of a brushed motor while keeping the costs down, you can choose to have an encoder added, though this usually increases the cost.

Brushed motors are typically used for tasks where speed is the main factor, like drive motors to move AGVs around or to spin the cleaning brush on a floor scrubbing robot. Other simplistic low-torque tasks are where brushed motors are optimal. For example, the door release motor on delivery bots.

Brushless Motors: These are a good option for applications and tasks that require more precision and control. Brushless motors use an external controller to regulate speed. You do have to make room for the motor controller elsewhere within the application though. Due to the absence of brushes BLDC motors have a much longer usage life than a standard brushed motor, though there is an increase in cost. They are often picked over Brushed motors due to their quiet nature and longer service life. The versatility of BLDCs means that they’re a solid choice for most applications.

Brushless motors are the perfect choice for applications that need high performance in a small package. They work great as enhanced precision drive motors and as joints on robotic arms. They also serve well for higher speed requirements for carrying out tasks like drilling. Outrunner types of BLDC motors are used mostly in drones as the propeller motor. More companies are starting to use them in other unique ways to accommodate different autonomous functions.

Stepper Motors: A type of BLDC motor, Stepper motors operates in small and precise “steps” that allow for incredibly high precision. Stepper motors are open-loop positioning, meaning they don’t rely on sensors or monitors, saving on size, weight, and complexity.

Stepper motors are great for tasks that require deliberate and precise movement as well as actions that require a hold and pause. This makes them an ideal choice for any type of placement or movement device, whether that is a robotic arm or a Cartesian grid system like on a 3D printer. Stepper motors are also well suited for applications and devices that hold and dispense items, like vending machines. Captive and Non-Captive stepper motors are great for linear movements like sophisticated locking systems or controlling the throttle on gas powered autonomous agricultural equipment.

A common way to increase the torque output of a DC motor is to couple it with a gearbox. The three most common types of these are Planetary, Spur, and Worm gear motors. Each gear motor has its own unique characteristics and purpose within the autonomous world. 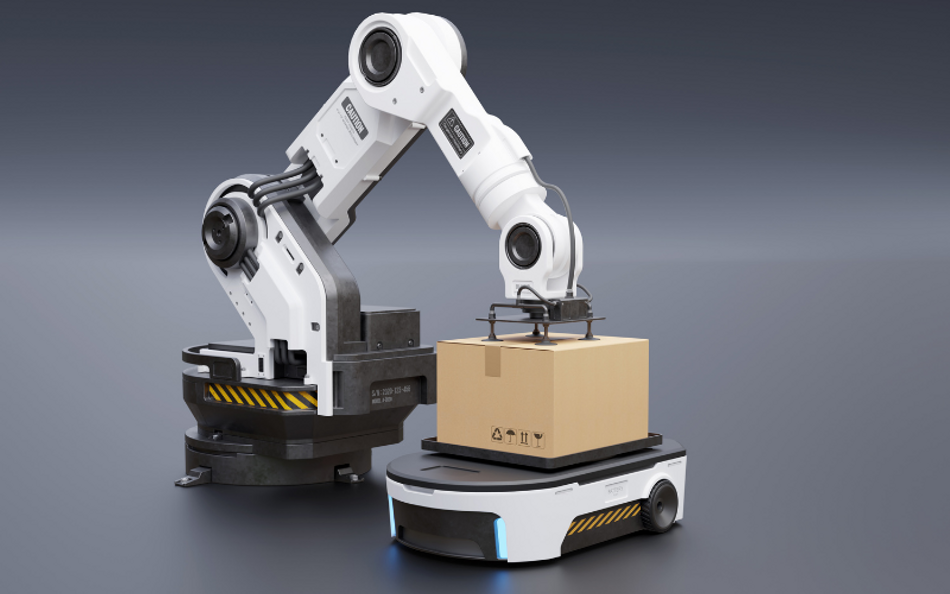 Spur Gear Motors: The most cost efficient gear motor solution, using straight toothed large and small gears stacked on parallel shafts. Due to their compact construction, they are the best choice for size constricted situations. They are a great option for light work loads like automated rollers or for use at lower torque values like in an autonomous auger system.

Planetary Gear Motors: This type of gear motor is designed with several satellite gears revolving around one central sun gear. Since several planetary gears are touching the sun gear at once the load is distributed, allowing planetary gear motors to sustain higher torque values. This makes them ideal for higher load and speed applications. Planetary gear motors are most commonly used within robotics where a joint or claw needs to operate varying loads, intermittently. They can be found in forklifts and warehouse robots. They are used in all types of industrial conveying and printing machines.

Worm Gear Motors: These use a “worm” gear to maximize the motor’s torque. The configuration of a worm gearbox turns the output shaft 90 degrees, allowing for a smaller mounting footprint. In addition, worm gear drives will only turn when power is applied, this means that they are self locking in the event of a power failure or a component breakage. This makes them desirable for situations where heavy loads need to be lifted. They can be found powering pulley and track systems for autonomous off-road vehicles as well.

As you can gather, in the growing world of autonomous robots and vehicles, motors and gear motors are what literally drives them forward. Using a slew of different motors allows an AGV to maneuver fast, light heavy objects, and maximize power efficiency. The recent expansion in the AGV market is built entirely on these motors, so make sure you use the right motor for the job.

Everything you need to know about Stepper Motors.... and more!

Get up to speed on what makes DC motors spin!

A short summary of the #Highlights of #2021 for wireless #charging. Thanks to all who made this possible!