Article 1 of the Power Conversion Series. Designers should get informed about the selection process for reinforced transformers.

This is the first article in a 5-part series exploring power conversion. The series will provide insight into how the rapid electrification of vehicles and the switch to renewable energy is driving the demand for safe and reliable power conversion and electronic components.

The articles were originally published in an e-magazine, and have been substantially edited by Wevolver to update them and make them available on the Wevolver platform. This series is sponsored by Mouser, an online distributor of electronic components. Through their sponsorship, Mouser Electronics supports engineers in designing sustainable and efficient applications for a greener future.

Providing isolated low-voltage bias power to integrated circuits such as microcontrollers, analog-to-digital converters, isolated gate drivers, or voltage monitoring integrated circuits (ICs) in high-voltage systems is usually accomplished with an isolated DC-DC converter. If the high-voltage system is spread out over several modules, the architecture might call for a parallel direct current (DC) bus on the low-voltage side with multiple isolated low-power DC-DC converters for each module. Because it is used multiple times in this scenario, an efficient and cost-effective topology is the best approach.

This article highlights the design benefits of using push-pull transformers that are proven solutions for these situations. Used as an example is the Bourns® Model HCTSM8 series transformer, which is AEC-Q200 compliant and available with a wide range of turns ratios as standard. Multiple-turns ratios are an important feature enabling the same basic circuit topology to be replicated across a system with the same components and PCB layout. With a transformer series such as the Model HCTSM8, designers are able to select the right reinforced transformer part number based on the specified output voltage for powering a microcontroller or an isolated IGBT gate driver.

Figure 1: Illustration of the operation of a push-pull converter with the red and green lines indicating output current.

Given a sufficiently high switching frequency and low DC voltages, the flux generated (Volt Seconds per Turn) remains well below the saturation point. Contrast this result with the split ferrite core in a flyback transformer where more turns are needed to ensure the current does not saturate the transformer. If there are tight space considerations and restrictions, the DC resistance will inevitably increase with the higher number of turns, resulting in reduced efficiency.

It is advised to look for a push-pull transformer with a toroidal core. What makes them a good choice is that there is no need for a gap, and a toroidal core is well known for providing good coupling between windings. This is because the flux has a short distance to travel and there is little dispersion between windings. The relatively high inductance factor of a push-pull transformer with a toroidal core means it is possible to achieve high magnetizing inductances without a high number of turns. Plus, a coil former is not required as the wires are wound directly on the ferrite, which features a high dielectric protective coating. Coil formers add extra space as does the fact that the ferrite split core is exposed on the top and bottom of the transformer is a surface-mount device (SMD).

A toroid core can be enclosed in a housing separating the core from the circuit board. This difference automatically minimizes the footprint on a PCB in high-voltage applications where safety distances (creepage and clearance) are required as defined by the standards for insulation (IEC 60664) and communications equipment (IEC 62368) that mandate a specified distance between the high-voltage hazardous side of the PCB and the low-voltage side. If the core is exposed, the clearance will be significantly reduced which will need to be compensated by additional width or height of the plastic carrier. 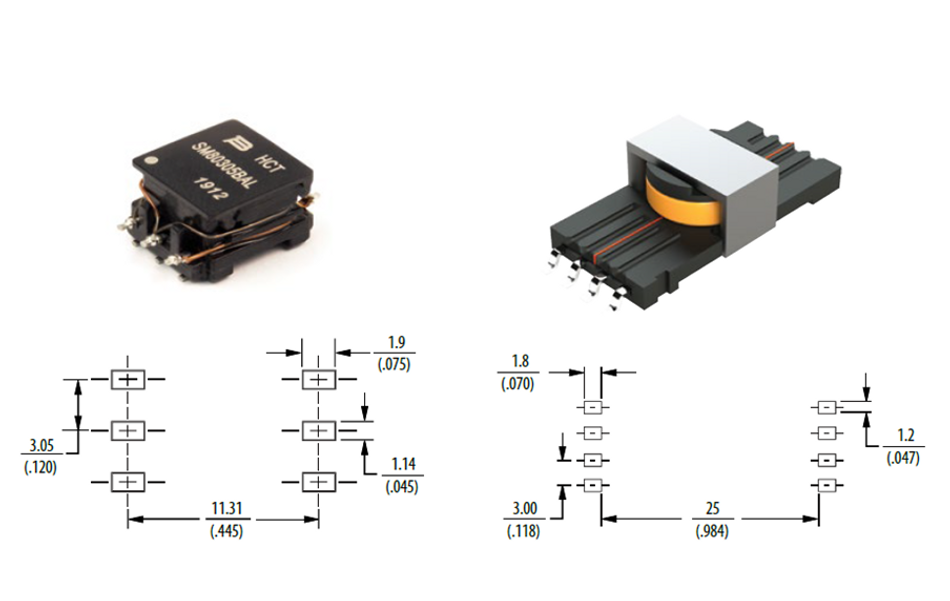 Figure 2: Comparison between Bourns Model HCTSM8 push-pull transformer and a typical split core transformer, both with 8mm of creepage.

Figure 3: Illustrates the construction of the Bourns Model HCTSM8 transformer with a toroidal core showing the lid and primary wire wrapped around the housing to extend the distance from the pins to the core.

The Bourns® HCTSM8 push-pull transformer makes full use of the enclosure around the ferrite core to maximize creepage and minimize the footprint. The core is not visible from the pins of the design so the clearance pin to core will be measured up the wall of the device and down the joint between the lid and the side wall. The effective tracking distance over the insulated wire from pin to core is maximized by running the insulated wire around the outside of the component. By using this breakthrough design that features a press fit of the lid against side wall and the wraparound insulated wire, the Model HCTSM8 series can obtain a creepage and clearance of 8.0mm despite having a nominal height of just 6.5mm and a distance from pad to pad on the PCB of 11mm max.

In addition, the Model HCTSM8 uses plastic material classified as Class I, which means it is the least conductive of all plastics to high voltages. It features triple-insulated wire on one winding (primary). Consequently, by taking 8.0mm as creepage and clearance distance and consulting table F.4 of IEC 60664, this transformer offers a working voltage of 800VRMS. As a result, inverters and battery packs with rms voltages of up to 800VRMS requiring reinforced insulation could use the HCTSM8 for the following two energy storage applications:

To generate plus and minus voltages for a gate driver, a circuit configuration similar to that shown in Figure 4 represents why Bourns® Model HCTSM8 is a valid solution. In this example, the device is driven by an integrated Texas Instruments SN6501 push-pull driver. The Texas Instruments device operates at a high frequency (400kHz) and has a fixed duty cycle (50 percent). The output relationship in a push-pull driver with Input Vin and Output VOUT and duty cycle D is as follows:

Model HCTSM8 has 11 different standard turns ratios. Because the Texas Instruments SN6501 device uses internal MOSFETs whose maximum voltage rating is 5V, the VIN cannot exceed this level. And in order to generate 12V, which is required to switch on an IGBT, it requires a turns ratio of 2.5.

It is not possible to push D beyond 50 percent in a push-pull transformer as the time to magnetize and demagnetize the core must be balanced or saturation will occur. The negative voltage can also be generated from the same transformer by attaching a shunt reference between the ground rail and a negative output. Given that the Model HCTSM8 series is a catalog product with AEC-Q200-compliant quality levels, it provides an efficient and cost-effective isolated power source compared to a customized transformer. A customized solution typically requires multiple outputs involving soft tooling and hard tooling, as well as the additional costs to develop.

Figure 4: Typical circuit generating diagram showing plus and minus voltages when using the Model HCTSM8 transformer.

Figure 5: Graph demonstrating the efficiency of the Bourns Model HCTSM8 transformer with 3:8 turns with the Texas Instruments Model SN6501 driver.

Figure 5 shows the efficiency of a circuit when using Model HCTSM80308BAL, which is an ideal solution to provide the 15V needed for an isolated gate driver IC. The optimum operating point for this application is between 100mA and 150mA output current.

Figure 6 shows the test circuit used to validate the HCTSM8 series and highlights the test board and equipment used for calculating overall power efficiency.

The question of ensuring that the transformer’s insulation will remain intact from the tape in which it is delivered to the board and during the lifetime of the application is answered by complying with accepted industry standards.

Bourns designed and tested its Model HCTSM8 series to survive identified solder reflow conditions and can be reflow soldered three times without degradation of the insulating wire. The insulation strength was tested using a Hi-POT tester applying 4kVRMS for up to 60 seconds. Shown in Figure 7 is the criteria Bourns used when it defined the electrical isolation specification:

The Hi-POT test is used to check the solid insulation in the transformer, but it can also be used to verify that the clearances comply with the standard. Any signs of arcing or corona discharges will be a clear failure. The Model HCTSM8 is designed for 800VRMS at a 2000m altitude. For higher altitudes, the working voltage must be derated as the breakdown voltage or corona of air decreases as the air becomes thinner.

Working voltages of 1000V and 1500V for transportation applications and energy storage in industrial installations, require isolation testing with various levels of test voltages according to the relevant standards as shown in Figure 8. The IEC 60664 standard also refers to using partial discharge testing to ensure no defects in the insulation such as tiny pinholes, which would expand over time under a strong electric field. In fact, complying with IEC 60664 requires that designs pass the standard of partial discharge if the electric field between primary and secondary exceeds 1000V/mm and if the working voltage exceeds 750V.

This article illustrates the advantages designers can leverage by using the Bourns® HCTSM8 series transformers for module hardware energy storage applications. The flexibility, efficiencies, low EMI and space-saving benefits present a compelling solution for these designs.

Figure 9: Presents the benefits of selecting a standard catalog transformer like the Model HCTSM8 series.

The Bourns® HCT series has been tested and approved by Texas Instruments in their Model SN6501 and SN6505, SN6505B-Q1 and SN6505D-Q1 series of push-pull drivers. As the range of applications for high-voltage driven equipment in transportation and other markets increases, so too will the demand for stable, high quality and standardized isolated power designs in applications such as modules in high-voltage battery or ultra-capacitor packs. Bourns offers 11 different fully tested and AEC-Q200 compliant Model HCTSM8 series push-pull transformer part numbers for the Texas Instrument drivers. Based on Bourns’ advanced power transformer design, the HCTSM8 series delivers the right combination of isolated power with low voltages for energy storage gate drivers, microcontrollers, battery management ICs and many more applications.

This article was originally written by Mouser and Bourns in an e-magazine and substantially edited by the Wevolver team. It's the first article of a 5-part series exploring power conversion. Future articles will dive into power conversion solutions for critical applications such as automotive and renewable energy.

Extending the Battery Life of Hearables and Wearables with Single-Inductor ...