Article #2 of Next-Gen Wi-Fi Applications and Solutions Series: Research in Wi-Fi today focuses on reducing interference more than anything else. By creating a distributed network with multiple tiny nodes, an ecosystem can be developed that auto-configures itself for best performance.

This is the second article in a 6-part series featuring articles on Next-Gen Wi-Fi Applications and Solutions. The series focuses on the improvements Wi-Fi 6/6E and its applications bring to enhance the performance of the next-gen wireless networking devices. This series is sponsored by Mouser Electronics. Through the sponsorship, Mouser Electronics shares its passion for technologies that enable smarter and connected applications.

Despite that nobody could keep track of the array of acronyms underlying Wi-Fi (IEEE 802.11b, .11a/g, .11n, .11ac), each new version of the wireless communication technology was a clear step forward in raw data rate. In the past four generations, that rate went from 11 Mbps to 6.9 Gbps–an increase of more than 650 times.

Now there is the imminent arrival of the latest standard, IEEE 802.11ax, also referred to as Wi-Fi 6/6E, with a maximum raw data rate of 9.6 Gbps, just 1.4 times more than the previous standard. But given its slow appearance and marginal raw data rate improvement, one might wonder if this is an indication that Wi-Fi is running out of steam.

So in this article, we take a closer look at Wi-Fi 6/6E and try to analyze the key areas where the technology has improved over its predecessors. We explain how Wi-Fi 6 goes beyond theoretical raw data rates to offer improved performance in practical applications.

Networking products and services are typically marketed with blazing fast theoretical data transfer rates. After all, the raw data rate is the one thing that serves as the most fundamental basis for measuring the performance of the technology for the masses. This comes as no surprise since Wi-Fi has always been about pure high-speed wireless data communication.

Wi-Fi 6/6E changes the number game. Underneath the acronym, there is a real shift going on from raw data rate towards multi-channel capacity and improved spectral reuse. This means that the real-life throughput experience of Wi-Fi 6/6E may be an increase of as much as 4 times compared to its predecessor, Wi-Fi 5 (.11ac).

On top of this, Wi-Fi 6/6E does away with the different network IDs for 2.4 GHz, 5 GHz, and additionally installed extenders, which is a major improvement in usability. Let’s explore because this all has significant consequences for consumers, as well as for product builders.

Consumers are majorly concerned about just 2 things when it comes to Wi-Fi. The first is performance (data rate) and the second is range. In urban areas these days, consumers have grown accustomed to what is now a common scenario–turning on a laptop, for example, and having to weed through the many routers or access points that are visible when trying to find the right Wi-Fi network. Many of the routers use a limited number of overlapping channels, which means users are sharing those channels. Or to put it another way, there is interference on those channels.

When two devices are talking through each other, over the same channel at the same moment, the messages get garbled, and both need to be sent again. It’s no surprise, then, that the throughput in dense environments can collapse in continuous retransmissions, which is again, a form of interference.

This interference is made worse by the fact that routers and access points have attempted to improve range via the highest output power possible. Anyone who has ever been to a crowded party can understand the consequences of this scenario. The more everyone speaks louder to be heard, the more the overall noise goes up and any real opportunity to communicate goes down. In a similar way, more output power just causes more interference.

Even worse, the higher output power in some channels of the band causes signals to “bleed” into the neighboring channels, another form of interference causing the capacity of the band and the total Wi-Fi system to degrade.

The goal of the latest Wi-Fi standards is less about higher data rates, and more about the use of as many channels in the 2.4 GHz band, 5 GHz band, or the 6 GHz band (for Wi-Fi 6E) as possible, at the same moment and in the same space.

Let’s look at an example to understand why this is needed. Imagine a family living in a house with multiple rooms, running different applications at the same time. In the past, this meant that everyone was using the same channel to communicate with the central router in the closet, but with all the interference limitations discussed in the previous section.

Wi-Fi 6/6E solves this issue with the help of multiple small-sized access points that are around the size of a matchbox. These access points are placed in every room of the house and run on different Wi-Fi channels. They are wirelessly connected over Wi-Fi to the central router in the closet. 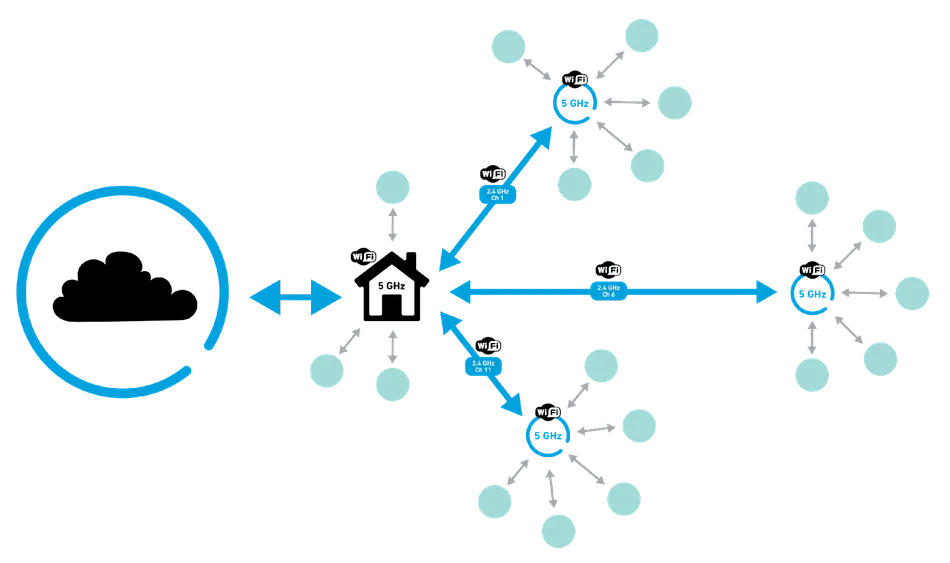 Fig. 1:  The goal of Wi-Fi 6/6E is full coverage of a home (or a building), and maximum performance in every room, which results in maximum overall capacity for everyone (at the system level).

Interestingly, now the output power to achieve range is no longer the most important criteria. Other things are becoming more important. In the first place, there is “flat power”. This means uniform output power across the band, taking care that all the channels in the band are at maximum strength. In many products, the channels in the middle of the bands are strong, side channels of the band have to use lower power, essentially creating capacity limitations.

Consumers do not like big and bulky devices with large antennas. Especially with distributed Wi-Fi routers in every room, consumers prefer smaller devices, preferably with no antennas sticking out at all.

Unfortunately, there is a reason why routers today are so big. All the radio communication and power electronics components inside the router’s case generate heat. Making a large housing and using heat sinks is the only way for the device to dissipate and get rid of the heat from the components inside.

Case makers for these large networking devices are working hard to make their components more efficient so that they can radiate a lot of Wi-Fi signals with as little heat as possible. Again, the previous focus was on maximum raw data rate and the highest (allowed) output power, but the new goal is to use all the available channels with the highest efficiency, which leads to low power dissipation, and eventually to a reduction in the product size. This is what makes Wi-Fi 6/6E a new standard and a big step forward.

There is one final question to note in this scenario. Assuming an access point in every room, and all the access points talking with the router in the closet over Wi-Fi, what frequency bands are preferred?

The reason why this question arises is because a frequency of 2.4 GHz gives a better range than 5 GHz/6 GHz. So, a logical choice would be to use 2.4 GHz as the “backbone” and 5 GHz/6 GHz as the connection between the access point and the end device. There is a little issue, though.

So, unsurprisingly, one can find products today that have different Wi-Fi system design philosophies. Some have 2.4 GHz as a backbone network, while others are using 5 GHz/6 GHz for the same purpose. The industry clearly is not unanimous about this just yet. And since indoor radio behavior can be fickle, there may not be an ultimate final solution–other than these distributed Wi-Fi systems configuring themselves based on optimizing the indoor environment, if the systems get smart enough.

This configuration can even be made dynamic, based on the data consumption requirements in various parts of the distributed Wi-Fi system. This means it would reconfigure itself automatically as it “understands” the complete environment, including negotiating with the neighbors so everyone gets a fair share of the spectrum. For the Wi-Fi 6/6E users, management of the different channels or signing up to 2.4 GHz or 5 GHz/6 GHz networks all disappears.

Wi-Fi 6/6E will show itself to the user as one network, with one password. Extended networks or different passwords will be a thing of the past, which makes getting or staying connected becomes very easy. The conclusion is clear–Wi-Fi 6/6E is not the end of Wi-Fi. It is the start of building even higher-performance systems supporting more users simultaneously and without interference.

Each new Wi-Fi release brought in new improvements in terms of performance. But the technology created interference problems for itself as it got popular. Wi-Fi 6/6E has laid the clear path forwards for the next couple of Wi-Fi generations. There is a shift in the trend that puts more emphasis on optimizing the use of available technologies instead of continuously upgrading the hardware and packing more raw power.

The next article in the Next-Gen Wi-Fi Applications and Solutions Series continues this discussion by diving a bit deeper into the technical aspects of Wi-Fi 6/6E.

This article was initially published by Mouser and Qorvo in an e-magazine. It has been substantially edited by the Wevolver team and Electrical Engineer Ravi Y Rao. It's the second article from the Next-Gen Wi-Fi Applications and Solutions Series. Future articles will introduce readers to some more interesting applications of the technology in various industries.

An introduction to 5G

An introduction to 5G

Article 2 of our 5G Series: An introduction to 5G performance, technology, and specifications and how it makes new applications possible.

Article #2 of our Circuit Protection Series: A short guide to ports, electrical stress, and solutions.

Article 6 of our 5G Series: The potential of 5G can only be unlocked with a large-scale infrastructure deployment.