At the beginning of the 2010s, consumers and professionals looking for an affordable 3D printer had only one option: fused deposition modeling (FDM). Initially developed by additive manufacturing giant Stratasys, FDM technology involves heating up strands of thermoplastic and depositing the molten material in successive 2D layers.

In 2009, however, the Stratasys patent for FDM technology expired, which enabled a number of smaller companies to begin developing their own extrusion-style 3D printers, many of which were targeted at first-time buyers.[1] And as more and more products emerged on the market — Makerbot, Ultimaker, and others — prices rapidly decreased.

But it wasn’t long before buyers had a second option for low-cost plastic 3D printing. By around 2012, companies like B9Creations and Formlabs were developing and marketing affordable 3D printers that used a completely different technology: vat photopolymerization. Instead of melting and extruding plastic, these printers used bright light to selectively cure liquid resin, producing parts with fine details and an exceptionally smooth surface finish. As with FDM, the market for SLA and DLP printers grew rapidly, and this had the effect of driving down prices.

Since that time, filament and resin printing technologies have remained the two main options for consumer- and professional-level 3D printing of plastic parts. And since many consumers and professionals end up choosing directly between FDM and stereolithography 3D printers, this article aims to compare the two technologies side by side, looking at their respective pros and cons, as well as suitable uses for each.

Stereolithography (SLA) and digital light processing (DLP) are two closely related 3D printing technologies that both use liquid resin as a printing material. They can both be classified as vat photopolymerization technologies: the printing process takes place within a vat filled with liquid resin, and that resin undergoes photopolymerization, a light-induced chemical reaction where it changes from liquid to solid.

Resin 3D printing technology relies on the process of photopolymerization. It uses liquid resin as a printing material, and this liquid can be turned into a solid when exposed to light. However, that doesn’t really explain how resin 3D printers are capable of creating highly detailed 3D objects such as prototypes, models, dental aligners, and jewelry patterns.

To make 3D shapes, resin 3D printers work in ways that are broadly similar to other 3D printers. That is, they form successive layers of 2D shapes, resulting in a final 3D shape consisting of all those layers joined together. But their method of creating each 2D layer is highly unique: stereolithography and DLP 3D printers use a precise UV light source to cure a 2D pattern into the liquid resin; only the pattern area of the resin hardens, while the rest remains liquid. 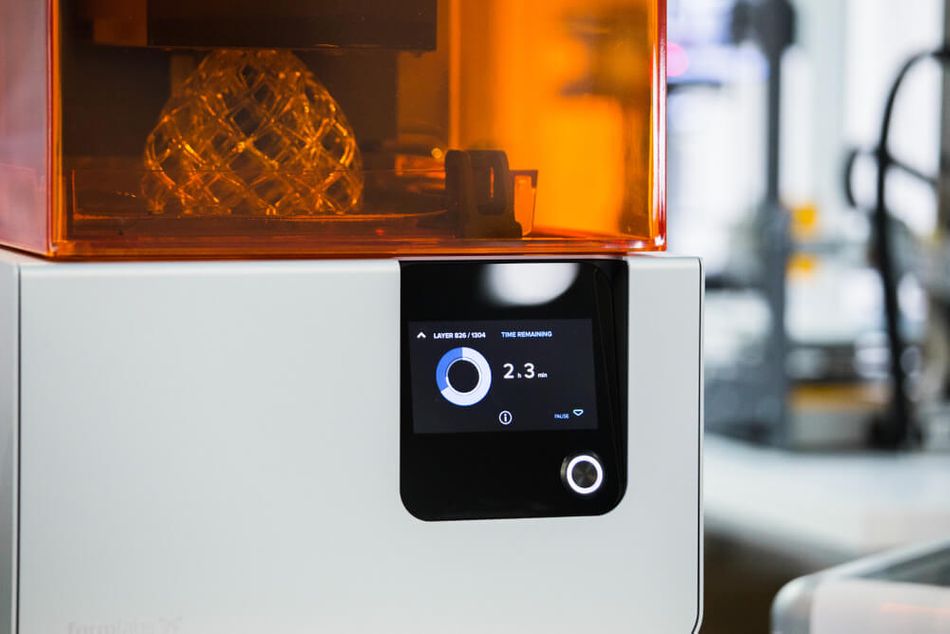 In order to create the following layers (and build up a 3D shape), a resin printer must create movement along the Z-axis — upwards or downwards. To achieve this, the build platform is lowered (or raised) in tiny increments after a layer has been cured.

Once each layer has been cured, the hardened resin part can be removed from the 3D printer, ready for support removal and other post-processing steps. Any remaining resin can be kept and reused.

The resins used for DLP and SLA printing — technically thermoset polymers — can be rigid or flexible. Some are marketed as high-strength engineering resins, while others are sold as castable resins that can be burnt out when used as patterns during investment casting.[2]

Stereolithography and digital light processing 3D printers do not use the same type of light source. SLA printers, which tend to be more expensive than DLP printers, use an ultraviolet (UV) laser to selectively cure patterns into the liquid resin.[3] These lasers effectively “draw” the pattern into the resin.

DLP printers work in a different way. Instead of using a focused laser beam to draw a pattern, they use a projector lens and a series of tiny mirrors. This means that the entire 2D layer can be cured at once by flashing a 2D image into the resin tank, making the process faster than SLA.[4]

A related form of resin printing is LCD printing, which is closer in nature to DLP than SLA. LCD resin printers use an LCD panel as a mask that goes between the light source and the resin in order to create 2D patterns; they are typically cheaper than both SLA and DLP systems.

What is FDM printing?

Fused deposition modeling (FDM) — sometimes known as fused filament fabrication (FFF) — is the dominant form of 3D printing today. This is partly due to its popularity with beginners and hobbyists, though there are plenty of professional and industrial users of FDM 3D printers too: high-end FDM printers and materials can be used to make industrial parts, aerospace components, and tooling.

FDM is a plastic 3D printing technology that uses spools of thermoplastic filament as feedstock. During the printing process, the filament is gently unwound from the spool, heated up, then deposited in layers using an extruder. Once the molten plastic is deposited (first onto the build plate, then onto subsequent layers) it cools down and solidifies, creating a hard plastic part. In some cases, the print bed is heated to improve bed adhesion. 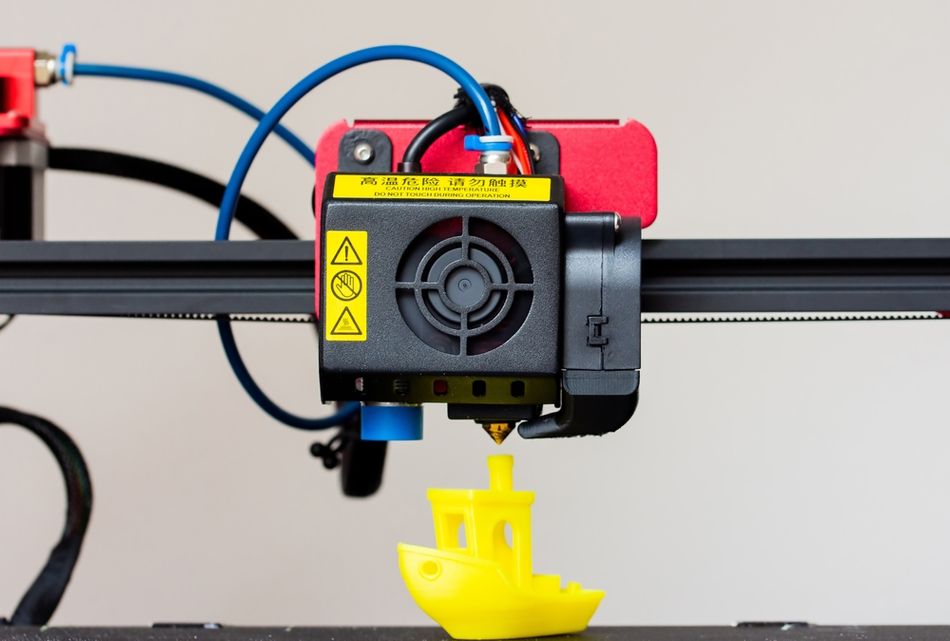 To make each layer into a precise 2D shape, the printhead moves on rails along the X and Y axes while it deposits material from a nozzle. This linear movement is achieved via motors controlled by computer instructions. When a layer is complete, the printhead moves incrementally along the Z-axis (upwards) on another rail, then begins the next layer.

Although it has its limitations, FDM is a versatile and reliable 3D printing process compatible with a huge range of plastic filaments; materials include affordable thermoplastics like PLA, engineering materials like polycarbonate, and high-performance materials like PEEK, as well as various blends and composites. Filament printing processes are most frequently used for prototyping, though they can also produce end-use parts.

When it comes to very fine features, a process like SLA can produce a high level of dimensional accuracy. Many SLA 3D printers are capable of printing layer heights as low as 25 microns, while most FDM 3D printers can only achieve around 100 microns.[5] Resin printers can also meet very tight tolerances.

Resin printers also have the edge when it comes to surface finish. FDM 3D printing often produces layer lines (visible ridges between layers along the Z-axis) that need to be removed through sanding or other post-processing steps (which alter the final dimensions of the printed part). But SLA and DLP processes produce exceptionally smooth parts that require minimal post-processing besides support removal.

Finally, parts printed with filament may be more susceptible to warping and deformation than those made from resin. This is due to the inevitable temperature fluctuations that occur during FDM printing.

While resin 3D printers can produce better quality parts than filament printers, they fall short when it comes to part strength and durability. Resin parts are often weak and brittle, so they have relatively few end-use applications.

Not all filament is equally durable — PLA filament, for example, produces fairly brittle parts — but the huge range of material possibilities for FDM 3D printing means that very strong parts can be made. Affordable ABS filament can lead to durable parts that are tough and resistant to high temperatures, while more expensive plastics like polycarbonate and nylon produce even better results.

Another advantage of filament 3D printing over resin 3D printing is its compatibility with composite materials. Thermoplastics like PLA and ABS can be reinforced with, for example, fiberglass or carbon fiber, making the printed parts far stronger.[6] This kind of reinforcement is not possible with liquid resins.

As a general rule, filament 3D printers have larger build areas than resin 3D printers. So while resin printers are great for highly detailed miniature parts, FDM is better for large prints.

But while filament printing is generally better for large prints, it is possible to achieve large-format resin 3D printing if the stereolithography apparatus uses a top-down configuration rather than a bottom-up one. Bottom-up printers (i.e. most desktop resin printers) have a light source underneath the resin tank and build the part upside down. Top-down printers, however, have a light source above the resin tank and move the build platform downwards. More often used in industrial settings, these printers require a full tank of liquid resin but can print much larger parts.

Within resin printing, SLA is better for large-format printing than DLP. DLP printers use projectors with a finite resolution (measured in pixels), so while it is technically possible to print large parts, resolution must be sacrificed to achieve the larger size. The principle is similar to using a video projector at home: if you place the projector close to the wall, the image will be small but sharp; if you move it further away, the image becomes larger but you can see the individual pixels.

Comparing the printing speed of filament and resin 3D printers is difficult because there are many factors to consider.

Firstly, not all resin printing technologies are the same: DLP is typically much faster than SLA, since it can cure a whole layer at once. However, since build volumes tend to be very small with DLP, it is usually not possible to print batches of objects during a single print job. So while the actual printing may be slower on SLA, it can achieve faster throughput if multiple units are required.

FDM 3D printing sits somewhere between DLP and SLA when it comes to pure print speed, but some filaments must be printed very slowly to avoid warping and deformation. And again, filament 3D printers can have much larger build volumes than resin printers, which enables batch printing and faster throughput of duplicate parts.

Finally, 3D printers (of all technologies) tend to have adjustable speeds, allowing the users to balance print times with print quality.

Resin and filament 3D printers have their own unique characteristics and advantages, so when choosing between them, it is better to ask “what will the 3D printer be used for?” rather than “which 3D printing technology is better?”

On the whole, resin 3D printers are best for producing small, detailed parts with an excellent surface finish. But filament printers come out on top when it comes to large or durable parts — especially those with demanding end-use applications. Resin printers are suitable for parts like castable patterns, visual prototypes, and dental devices, while filament printers offer a broader range of applications, including functional prototypes, industrial parts, and large-scale models.

[1] Schoffer F. How expiring patents are ushering in the next generation of 3D printing [Internet]. TechCrunch. TechCrunch; 2016 [cited 2022Jan14]. Available from: https://techcrunch.com/2016/05/15/how-expiring-patents-are-ushering-in-the-next-generation-of-3d-printing

Design for Additive Manufacturing: Everything you need to know

Additive manufacturing changes not only how products find their way to the consumer but also the form and function of those products.