Seen here in prototype form, this wireless power system can track where a receiver to activate and deactivate particular coils.

Electric cars, drones, and autonomous robots all share something in common with a smartphone: They have a tendency to run out of charge at the most annoying of times. Plugging them in isn’t always convenient, which is why there’s so much interest in wireless charging technologies — but when you’ve got a device, like a robot, roaming around a large area, things get tricky.

A trio of researchers from Aalto University’s School of Electrical Engineering have come up with a potential solution, creating a prototype large-area free-positioning wireless power transfer system targeting moving receivers — and, potentially, one day even scaling up to allowing electric cars to receive a charge as they drive along a road.

In their paper, first author Shamsul Arefeen Al Mahmud and colleagues detail what they describe as “an alternative, counter-intuitive” approach to the problem tackled by their contemporaries in the field — creating a system where the two power transmission coils nearest the receiver are fed out-of-phase, forming a loop whereby the magnetic flux created goes from one coil to the other.

“The out-of-phase configuration of currents in each coil pair strongly enhances the flux flow through the receiver,” the team explains, “since the two transmitters and the receiver form an effective loop conductor for magnetic flux.” 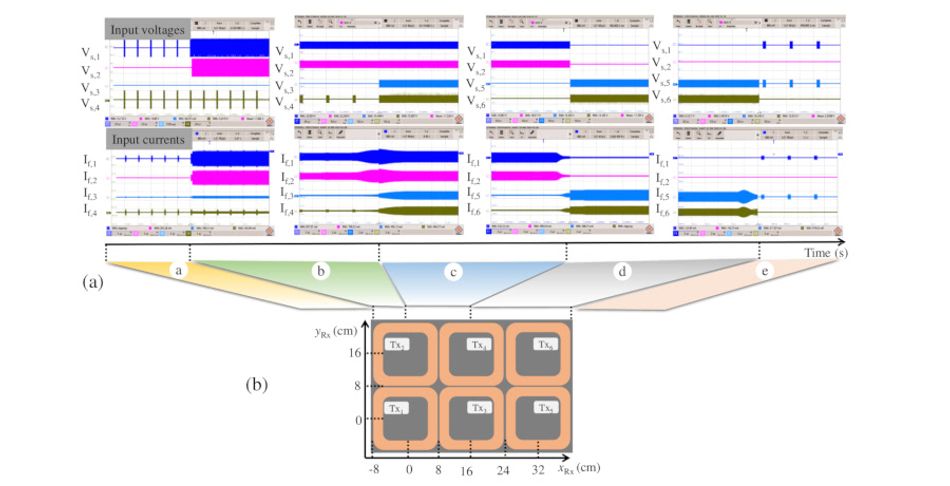 By running its coils out-of-phase, this wireless charging system provides high efficiency and a robust connection.

Transmitting the power with high efficiency is fantastic for devices which don’t move around, but the team’s proposed system goes a step further by implementing a scalable and relatively simple system for tracking the movement of a receiver to activate and deactivate coils as required — meaning an entire room, or road, could be fitted with transmitting coils which only activate when and where required.

The tracking system works using only measurements taken on the transmission side, requiring no modification to or additional hardware on the receiving device. Measurements are taken from the compensation inductors on inactive coils, allowing the system to determine if a receiver is in the area — and without, its creators claim, any risk of false activation from metal objects or other foreign matter.

The proposed system splits coils into three modes: Active, which are sending power to the receiving device; listening, which are inactive in terms of power transfer but monitoring for a receiver; and alert, which expect a receiver to come into transmission range in the immediate future.

Initially, all coils start up in listening mode. The control system then begins checking for a receiver by activating a subset of coils in a predetermined pattern while leaving the others off. If a receiver is detected, by measured inductance being higher than a configured turn-on threshold, the closest coils activate. 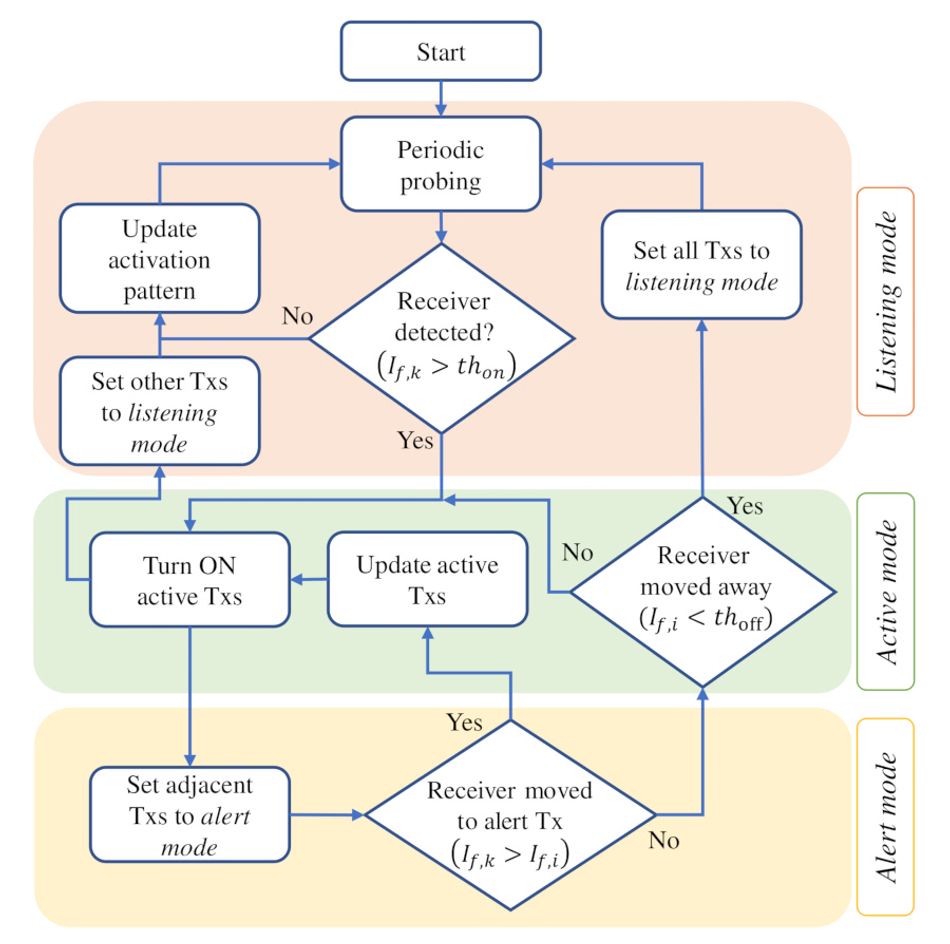 Coils are switched between the three modes — active, listening, and alert — using readings purely from the transmitting side.

To handle moving receivers, the team’s control system places the coils adjacent to the active area into the third mode, alert. These coils continuously compare their inactive input current with the active coil’s input current, waiting for a threshold to be exceeded before taking over transmission — allowing receiving devices to travel from coil to coil without loss of power.

Tested in the lab with a prototype designed to mimic a charging system for a mobile robot, the team’s approach showcased its potential: Efficiency between DC power source and DC load resistance was measured at 91 per cent with only a one percent variation for receiver position, dropping to just 90 per cent — with a noted slight drop of received power — as the receiver rotated.

While moving the receiving device along deliberately-asymmetrical paths, the charging system maintained its performance: The researchers recorded an efficiency of over 90 per cent and output power between 60W and 85W for the first two of three test paths, with efficiency dropping to around 87 per cent with a 40W output power only in what is described as "an extreme misalignment situation” involving travel at the very edge of the charging area. 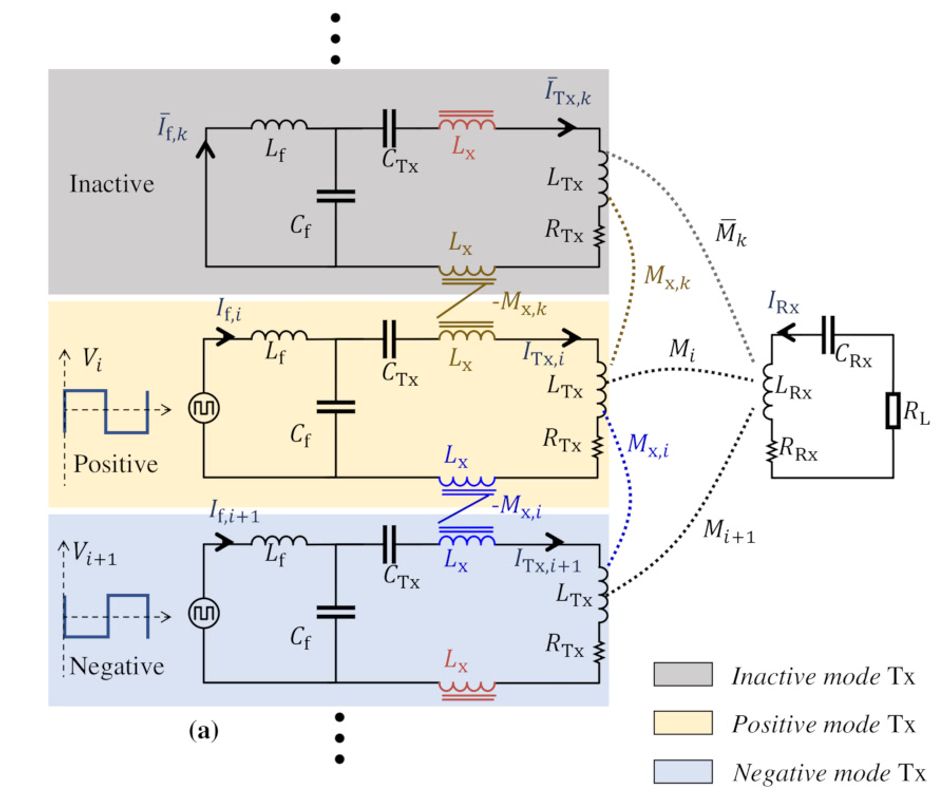 Proven in prototype, the system could potentially scale all the way up to actively-charging road surfaces for electric vehicles.

The lowest measured efficiency, meanwhile, was found when using a low load resistance, where efficiency dipped to 85 per cent — attributed by the team to losses in the receiver coil and rectifier and to a slight de-tuning of the receive coil.

“It is clear that the proposed WPT system demonstrate[s] fairly high-efficiency at [a] full range of different misalignment conditions,” the team concludes — while noting that commercialization of the approach, although equally suited to both high- and low-power applications, would require the design and application of a shielding system, not included in the experiments, “similar to any other WPT system.”

The team’s work has been accepted for publication in the journal IEEE Transactions on Industrial Electronics, and is available as an early access article on IEEE Xplore under open-access terms.

Article 5 of the Power Conversion Series. An innovative transformer solution addresses many of the traditional challenges previous products had to solve.

Check out our photovoltaics engineer, Simone Regondi, as he explains the integration of solar cells, both electrically and mechanically.