The infill percentage setting in slicer programs controls how dense the internal geometry of a part will be.

If you are new to FDM 3D printing, you might have noticed that the term “infill” keeps coming up alongside 3D models and in 3D printing tutorials. What is infill? In the simplest terms, infill refers to the density of plastic inside the 3D printed object. In the FDM 3D printing process, parts are not necessarily made solid. Instead, makers can generate an infill in their slicing software, which creates a pattern inside the solid outer shell of the printed part.

Infills are a great way to reduce material usage (and costs) and create more lightweight parts. But there are many reasons why it is important to choose the right infill parameters like pattern and infill percentage. These slicer settings influence the integrity and strength of the final printed object as well as other factors like material consumption and print speed. In this article, we are zooming in on these settings, with a particular focus on infill percentage.

What is Infill Percentage?

The infill percentage directly influences the infill density, but it also has an impact on many other properties, including the final 3D part’s strength, flexibility, and weight, as well as overall 3D print time. In general, a higher infill percentage will increase part strength, weight, and 3D printing time.[1] Choosing the right infill percentage for a particular 3D print job is therefore important in meeting design and performance goals.

Recommended reading: Infill 3D printing: All you need to know

While most slicer programs come with a default infill percentage of about 20%, there is no one-size-fits-all answer for choosing the right infill percentage. The optimal infill density will depend on several factors, including what the purpose of your 3D print is (i.e. is it a prototype, visual model, or functional part) and what the design goals are (i.e. producing a lightweight part or a dense and strong component). Below you’ll find some helpful tips for choosing infill percentage based on what type of part you are 3D printing.

For non-functional 3D prints—this includes visual prototypes and end-use prints that do not require strength or load bearing properties—a low infill percentage should be sufficient. Depending on the part geometry, you can select an infill between 0% and 15%. Choosing a low infill density will enable you to print your part rapidly and with minimal material cost. 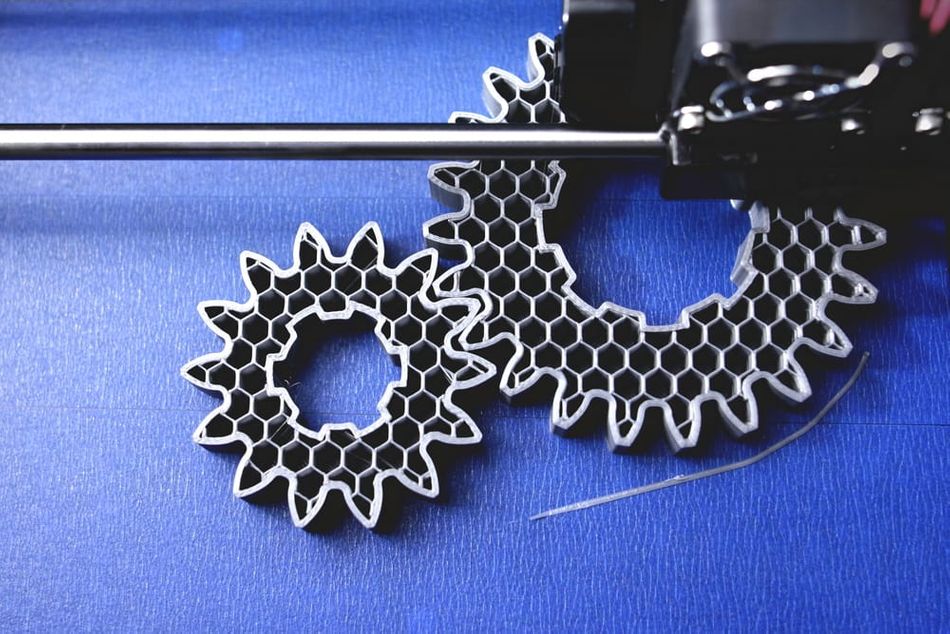 When it comes to choosing an infill density for 3D prints made from flexible filaments such as TPU, TPA, and TPC, the main thing to consider is how the percentage will influence part flexibility. Ultimately, the lower the infill percentage, the higher the flexibility. By the same logic, choosing a higher infill density will result in a less flexible part. Like with more conventional filaments such as PLA and ABS, print time, material usage, costs, and weight will also increase with a higher infill percentage.

For standard 3D prints, which will undergo light usage and require some strength, an infill percentage between 15% and 50% is suggested. This range of infill density will provide a limited degree of strength and reinforce the part’s structure without adding significant weight or print time. The lower the infill percentage, the less material will be used and thus the cheaper the cost of 3D printing will be.

Functional parts, such as brackets or components that must withstand forces and loads, typically require a higher infill density to ensure they won’t break under pressure. The minimum infill percentage for functional 3D prints should be 50%. While it is possible to choose 100% infill density, this will take the longest to print and use the most material. It will also result in the heaviest part, which can minimize the benefits of the solid structure.

Moreover, infill percentage is not the only factor that will influence how strong your 3D print is. The right infill pattern can help you optimize weight and strength without drastically increasing density. Let’s take a look.

Recommended reading: How to Remove Supports from 3D Prints

How do you choose an infill pattern?

First thing is first: what is an infill pattern? The infill pattern is a setting in 3D printing slicer programs, such as Cura and Simplify3D, that determines the geometry of the internal infill structure. Today, there are several different infill patterns available, each of which ranges in complexity and has benefits in terms of part strength and printing time. Among the most common types of infill patterns are lines, grid, triangles, cubic, concentric, zig-zag, honeycomb, and gyroid.[2] Here are our recommendations for infill patterns depending on your 3D printing application.

Non-functional 3D prints are models that do not require high strength or resistance. They include visual prototypes, decorations, and other objects that will not come under mechanical force. These types of 3D prints can fulfill their function with lower infill density (0-15%) and with the simplest infill patterns, such as lines or grid. These two patterns provide adequate strength in only two dimensions, and can be printed quickly. Lines are the fastest infill pattern to print and use the least amount of material, though they are less strong than grid, which provides strength in two directions.

The best infill patterns for flexible 3D prints made from TPU and other rubber-like filaments are concentric, cross, and cross 3D. Concentric infill consists of internal rings that follow the perimeter of the part’s walls. This pattern is great for flexible filaments because it provides little reinforcement to the walls and thus allows for flexible movement. As the names imply, cross and cross 3D are made up of 2D and 3D cross structures, respectively. Because the crosses are made up of short horizontal lines (compared to longer lines characteristic of line or grid), they provide less strength and better flexibility. Cross 3D, for its part, also reduces the vertical strength, promoting flexibility in all directions. 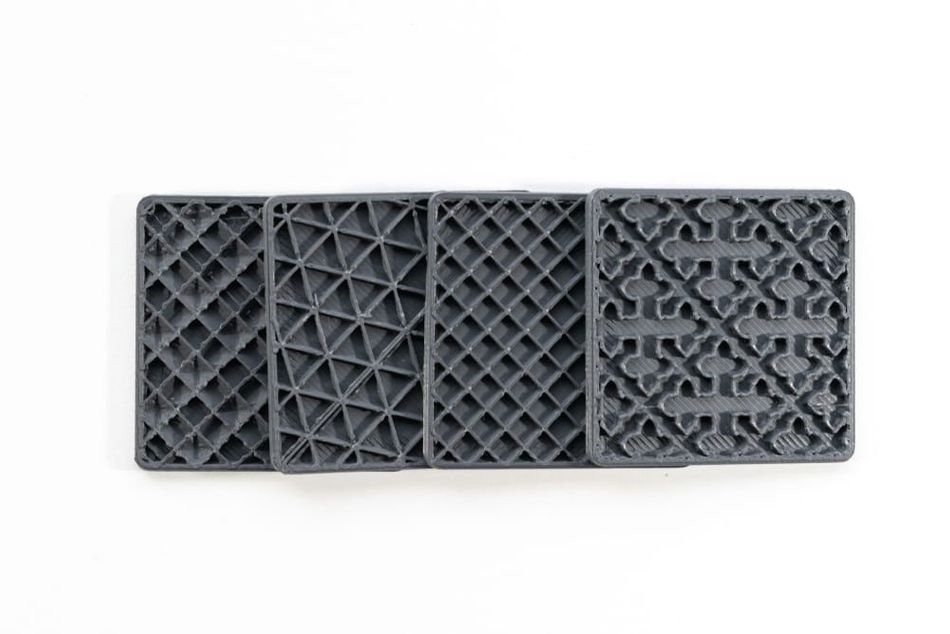 Infill patterns, such as grid, triangle, and cross, influence how strong and heavy a final 3D print will be.

For standard 3D prints that have some physical function but do not need a high level of strength, slightly more complex infill patterns like triangle and honeycomb are suitable. The triangle pattern provides strength in the direction of the part’s outer walls, while honeycomb offers good strength in all directions. Honeycomb is also known to have one of the best strength-to-weight ratios. These patterns do use more material and will extend your print time compared to the simplest infill patterns.

For functional 3D prints, the strongest infill patterns are recommended. Generally speaking, the strongest infill patterns are three dimensional patterns, such as cubic, octet, and gyroid. The cubic infill pattern consists of repeating 3D cubes, which are oriented on their corner. This orientation results in high strength in all directions. The octet pattern consists of a combination of 3D tetrahedrons and cubes, which provides very high strength. Last but not least, the gyroid infill is a complex and unique geometric structure made up exclusively of wavy lines. The gyroid infill is very strong in all directions as well as shear resistant. It also requires less material to achieve greater strength than many infill patterns and can be printed rapidly due to its curvy lines.

Recommended reading: Cura infill patterns: What they are and when to use them

Infills are an important part of extrusion-based FDM 3D printing and understanding how the different densities and patterns influence your final 3D model is vital. Why? Because choosing the right infill percentage and pattern allows you to optimize not only the performance of your printed object but also time and cost efficiency of the printing process.

In this article we covered the basics of choosing an infill percentage and pattern depending on the type of object you are 3D printing. Here are some of our key takeaways: