Why Do IoT Projects Fail?

The fact that nowadays three-quarters of IoT projects fail, is especially surprising considering that the Internet of Things is estimated to become a market valued at $ 11.1 trillion by 2025. Read about the main challenges faced by businesses implementing IoT-Solutions.

Back in 2019, McKinsey published an article describing the potential of the Internet of Things. They especially focused on the projected growth of wide-area IoT networks, laying at 30 percent between 2016 and 2022 and short-range IoT networks, at 20 percent growth at the same time. The consultancy underlines how small- and medium- enterprises can heavily benefit from the innovative advancements, all while implementation costs and time are becoming increasingly feasible.

Having said that, it is obvious that at a failure rate of 75% percent, the task of implementing and building an IoT solution is still harder than most anticipate. From those 75%, 30 percent already stall at the Proof of Concept stage. The fact that nowadays three-quarters of IoT projects fail, is especially surprising considering that the Internet of Things is estimated to become a market valued at $ 11.1 trillion by 2025, with 41 billion devices deployed globally.

We wanted to get as close to the truth as possible. To figure out the real reasons the IoT projects tend to fail, a chat with our Co-CEO Jonas Schmid was arranged.

This appeared to be one of the most crucial hurdles. There seems to be a general underestimation from the customer’s side in regards to the complexity of an IoT project. Specifically, in the area of the initial investment in development and the cost of creating a customized solution, which is what most business leaders demand.

There are certain ‘hidden costs’ associated with a customized solution. Schmid mentioned that Consulting, Setup-, Administration-, and Support time are all business activities provided by the IoT platform company that extensively drive up costs, eventually causing higher prices for the client.

Additionally, many underestimate the learning curve that comes with such a complex technological project. Instead of starting at a low scale, the initial goal is a mass ecosystem of sensors, with an immediate high cost and risk. Usually, first projects of such scale end up in the “IoT graveyard”, as resources eventually fade, a lack of knowledge and results is found, and an unsatisfactory outcome is the final stage.

“The ugly truth about IoT. A large number of IoT projects fail and almost all of them for the same common reasons.” - Jonas Schmid, CO-CEO at akenza.

Unclear business objectives can cause any project to fail, IoT solutions are no exception from that. Key to success is not just collecting the data and projecting it, but rather having a reason to collect and analyze. Companies that overfocus on the technical aspect of the project tend to become overwhelmed with the amount of work and data collected. Moreover, research found that other companies are just adopters for the sake of trend following, with no specific goal in mind, bringing no true benefit to the company.

Additionally, companies tend to forget the scalability, evolution and roadmap of their solutions. Cisco (2017) clarifies that the top and number one factor behind a successful project was the collaboration between IT and business leaders, having an input and knowledge of both sides, almost guarantees success regarding the optimal solution.

Sierra Wireless explains this by stating “With the IoT Start Small, Then Learn, Evolve, and Expand”. This statement is supported by Microsoft's research collected in 2019, which shows the main challenges businesses face when digitally transforming their business with IoT: 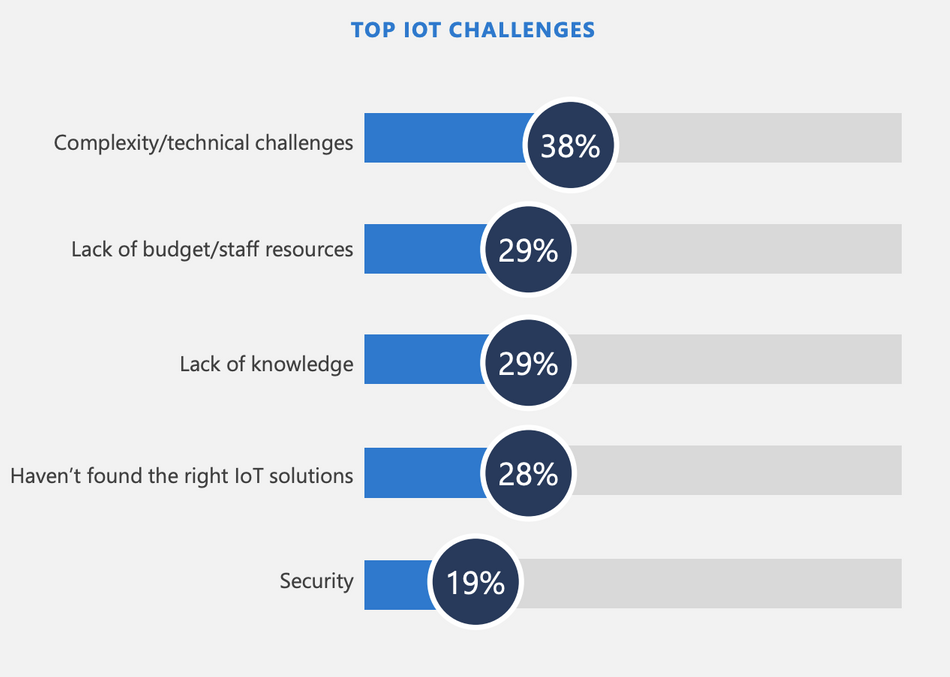 Although companies want to utilize IoT more, they face an important amount of complexity and technical challenges: 38% of the companies state that this is the main reason IoT is not an option for them. Looking more in depth, it is revealed that 47% of those don’t have enough available skilled workers, and 44% don’t have the resources to train these professionals.

It is important to acknowledge that this problem is not necessarily an exclusively internal one. In 2019, Forbes already spoke of a skills shortage in the IoT industry. Statistics show that back then, 76% of survey respondents felt they needed more higher level IoT specialists and 80% like they didn’t have the skills needed to stay in the industry. Additionally ⅓ estimated that the skills gap in the industry was major. Having said that, in 2020 and 2021 there was a major boom regarding the use of IoT. Consequently, the skills shortage has increased.

How to Avoid an IoT Downfall?

Key to a successful IoT solution is being able to define the requirements of such. The leaders need to understand the business goals of the solution and be willing to educate themselves and understand the IoT landscape. This includes being aware of all the options available on the market.

Agility is a true keyword in projects like these. Especially in the initial phases. By using a scalable option, it allows the company to slowly rise in the learning curve, without the overwhelming sensation that could potentially cause a corporate burnout for everyone involved. Apart from the collective experience, this decreases the costs and minimizes risk to a manageable amount.

A great solution for the above mentioned is implementing a Minimum Viable Product (MVP) which could be defined as a version of a product with just enough features to be usable by early customers, to provide feedback for future product development. Therefore, everyone involved avoids lengthy and eventually unnecessary work, offering a certain flexibility in regards to experimenting and trials.

Last but not least, it is important to involve the right stakeholders. Getting the return on knowledge resources can only work if the right people are part of the project. As mentioned before, often business leaders underestimate the technical complexity of an IoT project and therefore lack important knowledge and skills to construct them.

Eventually, IT people have to be adjourned at a later stage of the project, not only causing a delay but lacking the skills in the most crucial and initial stages. As earlier mentioned, Cisco found this to be the main point to make a project successful.

We are aware that building an IoT solution is a complex endeavour. By outsourcing non-core areas of your solution to a third party provider such as akenza, you will minimize your cost, improve the product quality and accelerate your time to market. The key features of a project resilient to technological change and built without barriers are scalability and agnosticity (connect to anything and everything). Additionally, this offers for the experimentation of trying out available solutions and flexibility in regards to the MVP.

With features such as the no-code rule engine and data flows, we allow for anyone with minimal IT experience and knowledge to become part of the project building. Our device type library makes it easy to add devices as wished and our data visualization tools are easy to understand. Akenza is a self-service, off-the-shelf solution, in which you can start creating your IoT case straight away.

We proceed as far as offering LoRaWAN as “Connectivity as a Service”, facilitating the usage of those networks and taking care of the network operator connectivity contract, enabling the hassle-free management of the connectivity on the customer's side. Cybersecurity and user management within the platform are implicitly assumed.

All these features are simplifying the onboarding processes and the initial steps to support the broader application of IoT-based solutions.

If you want to learn more about akenza, be sure to check out our 30-day free trial.

A LoRaWAN Candy Counter in the Akenza office

Are Smart Lighting Solutions Worth it?

Smart Building State of the Art

Akenza is dedicated to helping companies build their own smart IoT solutions. The Akenza IoT platform can be seen as a bridge between the physical world and the cloud. With a simple and secure management of smart devices, connectivity, and data, it enables the rapid market introduction of innovative...

Smart Workspaces in the Age of Hybrid

Complete Automation of a Micro-irrigation System with LPWAN Technology

Google IoT Core is shutting down

A LoRaWAN Candy Counter in the Akenza office

In this video, we show you how easy it is to integrate Swisscom’s Multisense LoRaWAN sensor into the Akenza platform and how to configure it via a simple Node-RED project.

Are Smart Lighting Solutions Worth it?

This article offers an insight into the current situation, trends and current application examples of smart lighting solutions and what role it plays in indoor- and outdoor IoT applications, offering optimization and efficiency in every aspect, well-being, energy, habits and space.

Smart Building State of the Art

From workplace occupancy to indoor air quality monitoring and dynamic cleaning of washrooms, a broad range of new digital services have been made possible by the use of IoT in the facility management sector.