When lightning strikes water, then water has a temporary disinfecting effect. Even rain during a thunderstorm has this short-lived effect. Start-up VitalFluid, located at HTC 25, mimics this natural phenomenon.

When lightning strikes water, then water has a temporary disinfecting effect. Even rain during a thunderstorm has this short-lived effect. Start-up VitalFluid, located at HTC 25, mimics this natural phenomenon. By further refining the technology that was developed at Eindhoven University of Technology (TU/e), validating it and bringing it to the market, the company is working on a novel and sustainable method for fertilization.

The start-up is thriving. The team grew from twelve to thirty employees during the corona pandemic. In late 2021, the company completed a Horizon 2020-funded project, which led to its first sales. The second production run has also been completed and the start is in the pipeline for a third and fourth run.

Founders Paul Leenders and Polo van Ooij met in 2014. At the time, Leenders, the then self-employed entrepreneur with a chemical analytics background, was working on a project with TNO Space and ESA to disinfect and sterilize air. It was through that project that he was introduced to air plasma technology. “That worked out really well, but the gases that were released during that process proved to be an issue,” Leenders notes. “Those are substances that you don’t want to breathe in.”

He got in touch with the plasma specialists at TU/e. “One of the professors there asked, ‘Have you ever thought about plasma-activated water?’ To be honest, I had no idea. He explained that if you conduct plasma-activated air over water, then that reactivity of the plasma is drawn into that water. If you then wash your hands in that water, it could act as a disinfectant.”

“I started thinking about that idea more and more back then. Because, if you can create disinfectant water with water and plasma, what’s left when that’s done its job? Water. I thought that was extremely interesting. If you sprayed crops with that, you could then cut down on the use of crop protection products.”

The water that is left has a “slightly elevated nitrate concentration,” Leenders goes on to explain. “That’s actually hydroponic water. A plant nutrient that you can use to spray crops with. By doing that, you make them more resilient to microorganisms so that you don’t have to use as many chemicals. It’s excellent foliage fertilizer, but you can also give it to the plant as nutrient water. They grow extremely well with that.” 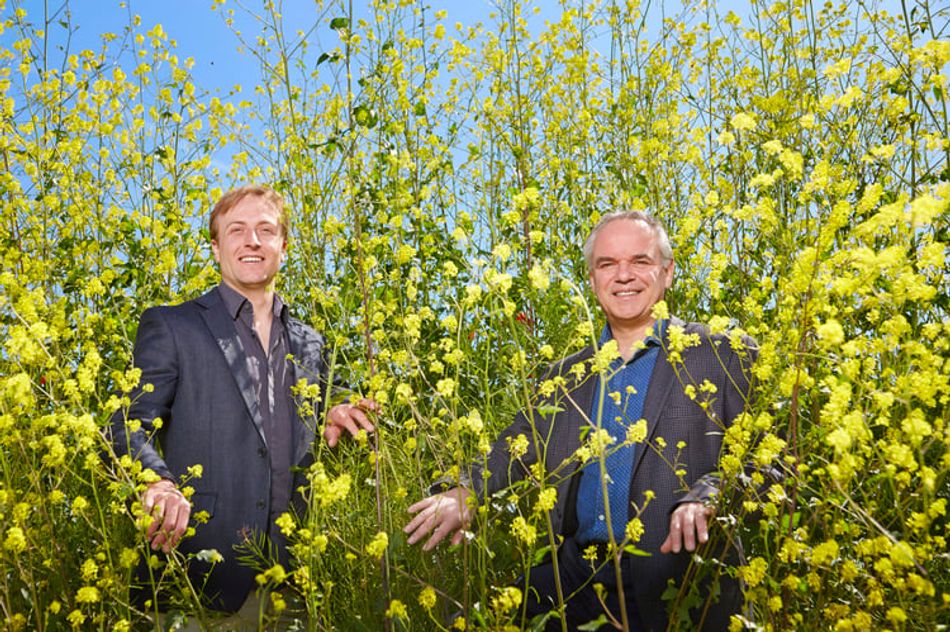 Polo van Ooij graduated as an electrical engineer from the Eindhoven University of Technology in 2014. “He’s really on the technical side of our business,” Leenders says. Both saw the potential of the technology. In a follow-up project, the men, together with Wageningen University and the Radboudumc, a number of companies from Nijmegen, and TU Eindhoven as a “technology supplier,” researched how the technology could be applied safely.
Leenders: “It has got to be safe for the user. That joint project yielded some great results. It also turned out there were opportunities to use that plasma-activated water as a sustainable alternative to chemical pesticides.” That prompted Leenders and Van Ooij to set up a company. Funded by OOST-NL, the province of Gelderland and the province of Overijssel, the entrepreneur and technician founded VitalFluid. That was back in 2014. Leenders reveals that TU/e has been a minority shareholder in the start-up since that time.

The company developed a reactor that transforms normal ambient air into a plasma phase. The fourth aggregation state after solid, liquid and gas. Leenders: “Air is made up of nitrogen for about eighty percent and oxygen for twenty percent. By using electrical energy, we mimic lightning bolts that pass through the air.” This is how the air reaches a plasma phase. That air brings the reactor into contact with ‘ordinary water.’ “When you do that, that water has a short-lived disinfectant effect. That reactivity disappears after about twenty minutes to half an hour.”

“Just like what happens in nature. When lightning strikes and it rains, then it rains plasma-activated water.” It is one of nature’s methods of binding nitrogen. “Make no mistake about it. Ten percent of all the bonded nitrogen on earth comes from lightning. Lightning strikes eight million times a day.”

“When we successfully wrapped that project up in 2016, we were still in the high voltage lab at the TU/e. We had about three to four square meters there.” It was getting too small, so Leenders and Van Ooij moved to their first premises in Veldhoven, in a section of a garage business. “Imagine that, a garage business. We had part of those premises back then. It was always cold there too.”

The start-up then went on to do very well. With early-stage funding from the Netherlands Enterprise Agency (RVO), among other things, two people were subsequently hired. In 2019, the start-up was awarded a European grant from Horizon 2020. “That was a sizeable budget totaling two million euros. That put the wind in our sails.” By the end of 2019, the team had grown to twelve people. The garage business became way too small and in 2020, VitalFluid moved to a new location on the High Tech Campus Eindhoven.

This article was written and published at Innovation Origins.

How Robots are Making the World More Sustainable

ETH postdoc Olivier Gröninger is improving the drinking water supply for people in rural areas of South America with his Openversum project. This benefits not only the families but also the local economy and the climate

How Robots are Making the World More Sustainable

What do robots have to do with sustainability? Is automation good for the planet?