The Rise Of Raspberry Pi In Industrial Settings

Raspberry Pi is a UK invention, which started out as a small single-board computer (SBC) intended for educational purposes. It was originally developed by the Raspberry Pi Foundation, who wanted to produce a low-cost SBC for teaching basic computer science.

It would primarily be for use in schools and to aid computer literacy in developing countries, allowing people of all ages to learn basic coding. The first model was released in February 2012, followed by several upgraded models in succeeding years.

This happened because the Raspberry Pi soon became much more popular than its developers expected. Due to its compact, modular nature, open design and low selling price, it was rapidly taken up by enthusiasts outside its target market. Computer hobbyists found it an ideal base for experimenting with their own builds, and the Raspberry Pi started appearing in fields such as robotics and weather monitoring. Increasing its speed and adopting the universal USB and HDMI standards made this SBC user-friendly at all levels.

How Did The Raspberry Pi Get Industrialised?

As the newer models of Raspberry Pi incorporated more capabilities, it began to be taken up by commercial and small industry enterprises. Its modules were incorporated into digital items like cameras, media players, telephony and portable music synthesisers. It was used for home automation systems and for recording data on the international space station. Several companies began to incorporate Raspberry Pi modules into industrial automation interfaces.

The Raspberry Pi really took off in industrial settings after the release of the first Raspberry Compute Module in 2014. Following the great commercial success of the original model, the next generation of SBCs was specifically aimed at business and industry. The essential elements of the Raspberry Pi were integrated onto a small board, which fitted into a standard connector.

This Compute Module looked very much like a stick of RAM, and was designed for integration into an application-specific PCB or carrier board. This gave greater scope for hardware designers to manipulate form factors, and engineers to expand I/O connectivity options. The Raspberry Pi Compute Module could be adapted by any industry sector to serve its specific needs. Later versions could be plugged into a USB port or mounted on a DIN rail, making it very versatile.

How Is Raspberry Pi Used In Industry?

Raspberry Pi has been adapted to provide computing solutions for a wide range of industrial applications. They’re very cost-effective and energy-efficient, drawing low power and thus reducing energy consumption and costs. While most promotions of Raspberry Pi for industry were initially targeted at developers, a few years of experimentation have shown that it’s well up to the task. Starting out with applications like system integrators, Raspberry Pi modules are now able to govern a simple device or a more powerful PLC. They can be as small as microcontrollers or as complex as a distributed control system.

In many industrial applications, Raspberry Pi modules can form the basis of I/O and sensor modules, as well as control and server units. They’re used for tracking and data monitoring, and are ideal for 3D printing and Just In Time manufacturing. Raspberry Pi computers can be found in edge computing applications and airport security systems, and are used for controlling large ventilation systems. Raspberry Pi modules form the basis of automated self-pour dispenser systems for food and beverages, and provide precision temperature control for carbon fibre recycling. 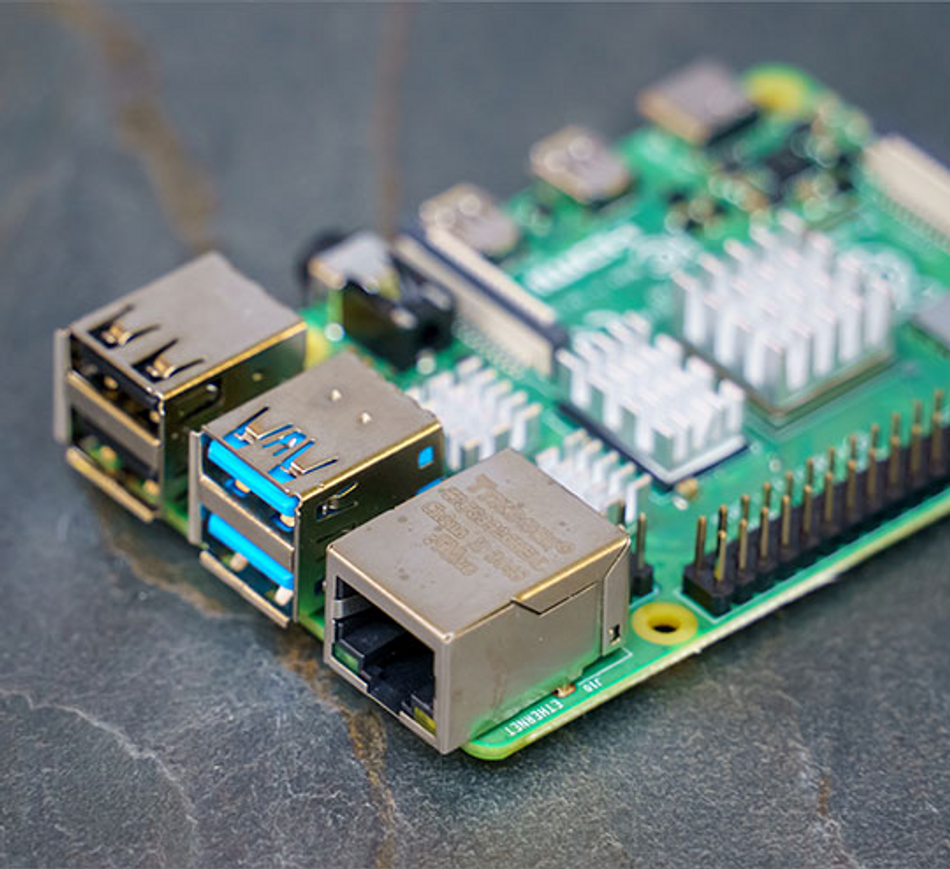 A Raspberry Pi can power all sorts of industrial robots, from automated agricultural equipment to delicate robotic arms for pharmaceutical applications. Low-cost robots have been designed for autonomous indoor tour guiding. GPS-guided mobile robots can be used in a variety of applications, including mapping and exploration of air ventilation ducts and underwater installations. Cobots are deployed in many factories for routine picking and placing jobs, and can incorporate functions such as autonomous navigation, obstacle detection and avoidance or risky situation detection.

Because the Raspberry Pi modules are so small, they can easily be slotted into portable units like robot arms. For example, one project was developed during the pandemic for treating patients remotely via a smartphone-controlled robot arm. They can be equipped with all sorts of sensors, including those for detecting colour or distance. Together with AI and machine learning, these units can be deployed in a number of interesting industrial contexts. In another example, a combination of real-time video monitoring, type identification and a neural network was constructed with a Raspberry Pi controller, which revolutionised the sorting of cucumbers.

Some Use Cases For Raspberry Pi In An Industrial Setting

Several companies are using Raspberry Pi in their IIoT control devices. Hilscher's netPi I/O Gateway, for example, is a robust, heavy-duty controller, which has both wired and wireless connection capability. It can accommodate expansions and add-ons, such as modules for WSAN (wireless sensor and actuator network) communications, digital I/Os and RFID. It’s resistant to dust, humidity, vibration and shock, as well as extreme temperatures. It can be VESA or DIN rail mounted, with a plug design that prevents accidental pull-outs. This type of device is designed for edge automation and can also be custom configured for tailored industrial solutions.

TechBase incorporated the Raspberry Pi Compute Module into a new design that can be adapted for targeted industrial automation and IIoT applications. The ModBerry industrial computer offers many customisable options, including wireless/GSM modems, analogue inputs/outputs or Ethernet and Serial ports. It offers multiple software and mounting options, and can allow space for additional modules or upgrades.

The big advantage of using Raspberry Pi in industrial settings is its almost infinite flexibility. Because it’s not tied to any one manufacturer’s hardware, it can be used with most existing systems, or built with any kind of components. As well as its innate compact structure, this low-cost SBC has a global support community based on its open-source availability.

From its early history as a plaything for nerds, the Raspberry Pi has acquired a back catalogue of innovation and development. Complete and considerable documentation is available to help design, install and operate a Raspberry Pi system. Information on conformity, compliance and test certification is available on their Product Information Portal.

We formed Rowse in 2004, and have enjoyed many years of rewarding engagement with our customers. Our aim is always to supply quality products and a quality service, at the most competitive market prices. We currently work with clients in the domestic, industrial and military sectors, with a product ...

What Is Smart Pneumatics?

How To Use AI ML To Optimise Manufacturing Costs

Manufacturing will be led into a greener future through the game-changing ability of cloud-based procurement and collaboration tools.

Announcing the December Build Month. A program to support developers in building their next IoT project with cellular technology.