Alex van de Steeg mapped CO2 plasmas to figure out the reactions at play when CO2 splits into other molecules at temperatures hotter than the surface of the sun.

As part of the goals of the Paris Climate Accords, we must decrease fossil fuel-related CO2 in the atmosphere. One way to do this, and at the same time produce sustainable fuels, is to split CO2 molecules into carbon monoxide (CO) and oxygen. The CO could then be used to make fuels for the aviation and manufacturing industries. For his PhD research, Alex van de Steeg studied in detail how high-temperature plasmas split CO2 into CO. His results suggest that using plasmas is an appealing way to make the building blocks for sustainable fuels in the future. Van de Steeg obtained his PhD cum laude at the department of Applied Physics on March 1st.

To split the chemical bonds in CO2 molecules, heat is needed. One way to get this heat is from plasmas, and it’s been long known that plasmas can efficiently split CO2, thanks to 40-year-old research from the Soviet Union.

“Issues with the climate and greenhouse gases have led to this old research been explored by many scientists,” says Alex van de Steeg, researcher in the Elementary Processes in Gas Discharges group in the department of Applied Physics.

While the old research has left its mark on scientists, it has also confused them. “It has been hard to reproduce past results,” notes Van de Steeg. “For example, recent experiments with CO2 plasmas have shown that higher temperatures are needed, above 3000 kelvin (K) in fact. But the old research indicates that splitting can take place at lower temperatures.”

Disagreement between the past results and recent attempts to replicate them proved a great motivation for Van de Steeg’s research, which he carried out at DIFFER under the supervision of Gerard van Rooij and Richard van de Sanden and in collaboration with Maastricht University and Shell.

“To gain a better understanding of how CO2 dissociates or splits in a plasma, we developed new ways to study CO2 plasmas generated in a microwave using so-called laser scattering diagnostics,” says Van de Steeg. “This involves focusing an intense laser beam into the plasma and then measuring the light scattered. In this way, we can gather time and spatial information on the temperature and composition of the plasma.”

Measurements of the CO2 plasma provided information on the chemical and physical processes that occur during splitting of the molecules. Added to that, the researchers gained a new appreciation for the extreme conditions in CO2 plasmas. “The plasma temperature exceeds 6000 K, which is hotter than the surface of the sun,” notes Van de Steeg.

Probing the plasma also helped Van de Steeg and the researchers to create a map of the plasma, which they then combined with a numerical model. “This helped us to identify reaction rates and the molecules involved in those reactions in different parts of the plasma, and it showed that chemical reactivity is dependent on very high temperatures, which contradicts the past results. Before we didn’t have this information, so having this information is significant.” 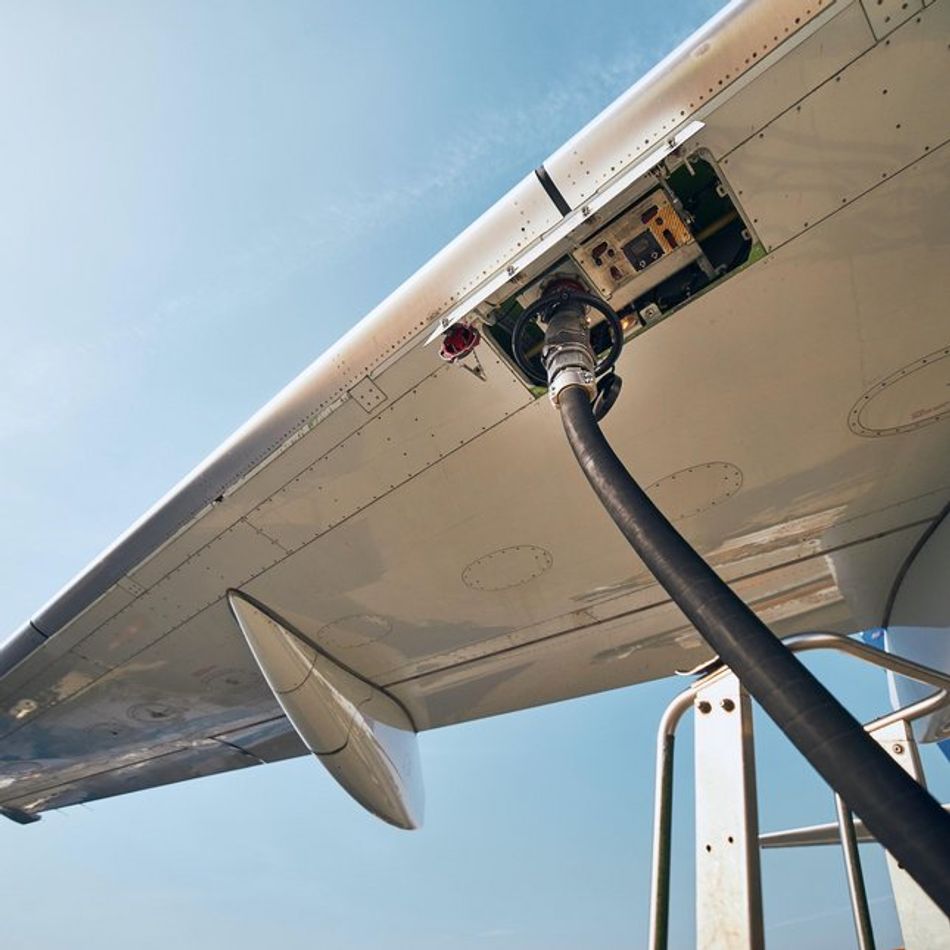 Fuels made using carbon monoxide derived from CO2 plasmas could be used in the aviation industry in the future. Source: Shutterstock.

What’s more, Van de Steeg’s research revealed the chemical reactions that produced the most CO, which would of course increase the potential to produce more fuels afterwards.

“Two reactions lead to almost all splitting: collisions of CO2 molecules with other molecules in the plasma, and the aggregation of O and CO2 (known as association) that eventually leads to CO and O2,” says Van de Steeg.

And it’s the second of these reactions that might lead to an increased (or larger) energy efficiency of thermal CO2 reactors. “Maximum efficiency without O-CO2 association is just above 50%, which increases to 70% when they are included. And this is close to the efficiencies reached in experiments 40 years ago.”

One thing to note is that a lot of energy is needed to initiate the plasma reactions, but this energy can be more than balanced thanks to the potential of using the CO molecules to make sustainable fuels. “So, instead of taking oil from wells to produce fossil fuels, we can make fuels using the CO2 already in the atmosphere from combusting fuels in the past. It’s a circular process of sort.”

Van de Steeg’s research indicates that high energy efficiencies of CO2 splitting are within reach, and he’s very optimistic about where these findings could go. “With these findings and careful reactor design, high energy efficiencies are within reach, which means that plasma splitting approaches could be an attractive technology for the energy transition.”

And what makes it even more attractive is the availability of large-scale microwave radiation equipment that can be used to split CO2 using plasmas. With plenty of CO2 in the atmosphere and the technology in place, it seems like it’s only a matter of time until research like that of Van de Steeg helps to establish reactors to produce future fuels from CO2.

Sustainable fuels are based on green hydrogen and carbon dioxide - and should make a significant contribution to decarbonising sectors such as aviation, where fossil fuels are particularly difficult to replace.

Initial findings from a world-first study of the impact of 100 percent Sustainable Aviation Fuel (SAF) on both engines of a commercial jet have provided promising early results.

Researchers at ETH Zurich have developed the process technology that can produce carbon-​neutral transportation fuels from sunlight and air. Now, in a Nature publication, they demonstrate the stable and reliable operation of the solar mini-​refinery under real on-​sun conditions.