Vision of the 'virtual product' as a guiding concept at DLR and for digitalised product development. Credit: DLR (CC BY-NC-ND 3.0)

The initial project for the digitalised development of control surfaces for future aircraft wings has now been successfully completed at the German Aerospace Center (Deutsches Zentrum für Luft- und Raumfahrt; DLR) Virtual Product House (VPH). At the Bremen Center for Eco-efficient Materials and Technologies (EcoMaT), DLR and partners from industry and research simulated a sequential digitalised chain of development phases for a wing flap on a computer for the first time – from design to production and testing. In doing so, DLR is laying the foundation for future virtual aircraft design processes through to certification – an important tool for accelerating the development of highly efficient aircraft.

"On the journey towards emission-free air transport, DLR acts as an architect and considers the entire system, with all its interrelationships, in order to get innovative technologies and digital methods to the industrial application stage in a timely manner, working together with our partners. As an integration centre for virtual product development, VPH plays a key role at DLR, and is the interface with industry and the regulatory authorities," explains Markus Fischer, DLR Divisional Board Member for Aeronautics.

Now that the VPH process has been successfully implemented in the initial project, wing and flap concepts can be designed more efficiently and in a more target-oriented way through advance simulations of production and testing. This means that possible complications and shortcomings in later development phases can be anticipated early on and avoided by altering the design. The simulation-based test procedures are also intended to replace some of the physical tests. In future, there will be less need for tests to be conducted using complex facilities. "Not only does this save a lot of time and money for testing and certification, but the 'end-to-end' digitalised chain also makes it possible to significantly reduce the overall development time for innovative aircraft components," says Kristof Risse, Head of VPH at DLR, describing the advantages.

VPH has been set up as an integration centre and research platform where experts from various DLR institutes and partners work together to integrate all of the key disciplines involved in aircraft development. Digital collaboration and co-development with the industrial VPH partners are made possible via a 'common source' approach in the form of a secure simulation environment, which was developed as part of the VPH initial project. 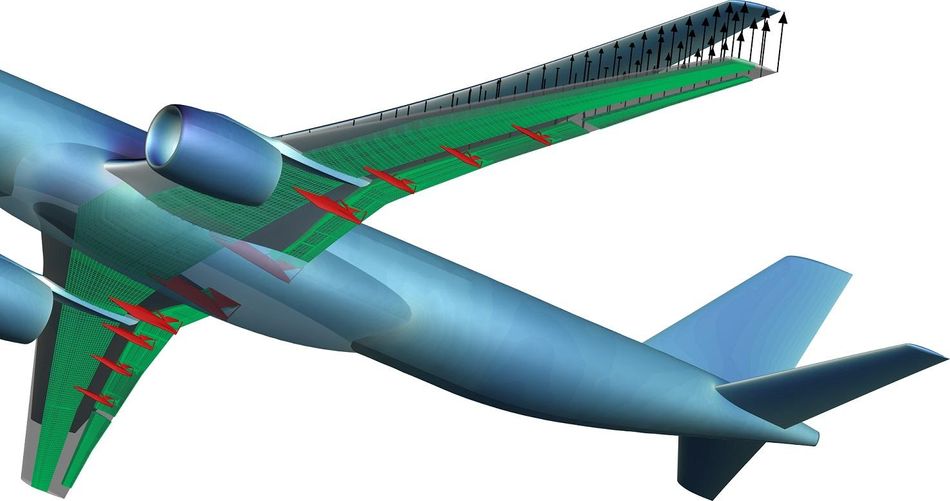 Creating aircraft with drastically reduced emissions requires completely new designs. The EU has set a goal for air transport to become climate-neutral by the middle of the 21st century. Meeting this target will require not only low-emission engines and sustainable fuels, but also a new, highly efficient generation of aircraft with a wide range of new components. Development times for new aircraft must be significantly reduced in order to react quickly to the urgent climate goals.

There are many approaches with the potential to reduce energy consumption and emissions, such as high-aspect-ratio wings with a larger span and thus reduced drag and fuel consumption. Smart wings with multifunctional control surfaces, which were also investigated in the VPH initial project, can adapt optimally to the different conditions during take-off, landing and cruising flight. Variable adaptations to different flight conditions also enable the design of lighter wings, leading to further fuel savings.

One possible solution is using hydrogen produced from renewable energy sources as a sustainable energy carrier. Hydrogen-powered aircraft call for disruptive approaches that require completely new design ideas. Markus Fischer believes that digitalisation will prove particularly helpful in addressing this challenge: "New and radical aircraft concepts and the consistent application of validated digital methods allows an optimal exploration of the design space. The speed of innovation for the introduction of completely new aircraft technologies can be significantly increased by efficiently combining virtual product development and physical demonstrations." The process developed at VPH can be used for various industrial applications and aircraft components. In addition to the wing, researchers involved in the VPH start-up project have already set up an initial process chain for the digitalised development of a hydrogen tank.

At VPH, research is already underway on a follow-up project funded by the Bremen LuRaFo programme. One of the focal points of the VPH 2.0 project is the further development and application of the simulation process established in the initial project for the consistent linking of the virtual design, production and test methods. The goal is to create 'digital twins' – fully functional, digital representations of real aircraft components. The processes that have been developed are being applied in the VPH 2.0 project for concepts relating to 'hydrogen tanks' and 'intelligent wings and control surfaces'. In this way, VPH will continue to pursue the future vision of virtual test flights and virtual certification for the timely introduction of climate-friendly aircraft programmes.

As part of the initial project, VPH partnered with Airbus, FFT Produktionssysteme, IABG, Liebherr-Aerospace and the University of Bremen. It also worked in close conjunction with EASA, the European certification authority, on matters relating to virtual certification. The initial project was funded by the State of Bremen and the European Regional Development Fund (ERDF).

Can 5G Really Bring Down an Airplane?

Cambridge engineers will build a Digital Twin of UK airspace and a related machine learning system that collaborates with humans, as part of a business-led research project announced in support of the government’s UK Innovation Strategy.

In this episode, we talk about how MIT engineers have proven a way to detect the presence of origin for cancer cells in pee using nanoparticles, the robotic neck brace developed by Columbia University researchers, and a novel method to reduce the noise generated by airplanes during landing.