An MIT team has designed an “acoustic fabric,” woven with a fiber that is designed from a “piezoelectric” material that produces an electrical signal when bent or mechanically deformed, providing a means for the fabric to convert sound vibrations into electrical signals. Image: Greg Hren

Having trouble hearing? Just turn up your shirt. That’s the idea behind a new “acoustic fabric” developed by engineers at MIT and collaborators at Rhode Island School of Design.

The team has designed a fabric that works like a microphone, converting sound first into mechanical vibrations, then into electrical signals, similarly to how our ears hear.

All fabrics vibrate in response to audible sounds, though these vibrations are on the scale of nanometers — far too small to ordinarily be sensed. To capture these imperceptible signals, the researchers created a flexible fiber that, when woven into a fabric, bends with the fabric like seaweed on the ocean’s surface.

The fiber is designed from a “piezoelectric” material that produces an electrical signal when bent or mechanically deformed, providing a means for the fabric to convert sound vibrations into electrical signals. 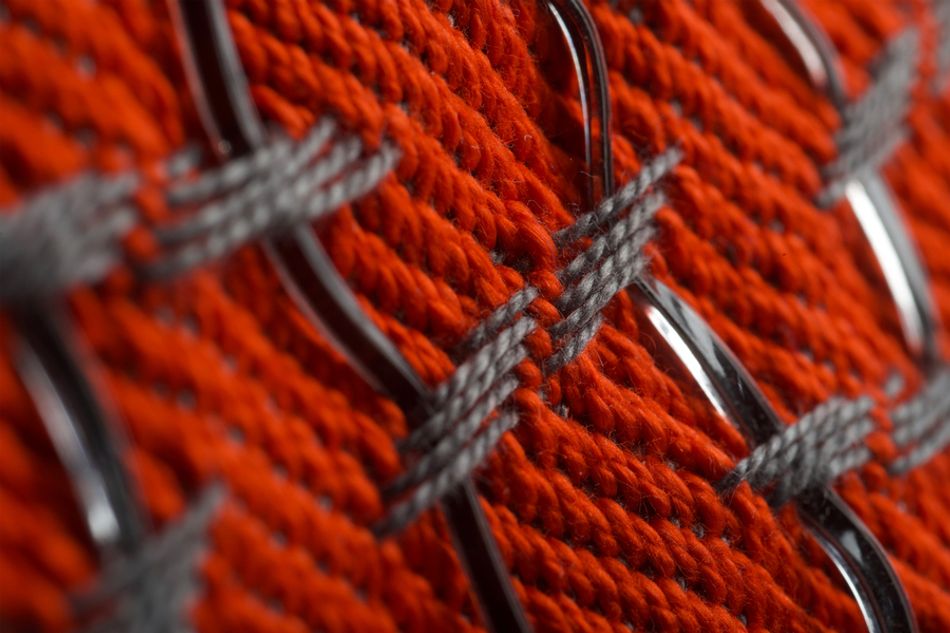 The fabric can capture sounds ranging in decibel from a quiet library to heavy road traffic, and determine the precise direction of sudden sounds like handclaps. When woven into a shirt’s lining, the fabric can detect a wearer’s subtle heartbeat features. The fibers can also be made to generate sound, such as a recording of spoken words, that another fabric can detect.

A study detailing the team’s design appears today in Nature. Lead author Wei Yan, who helped develop the fiber as an MIT postdoc, sees many uses for fabrics that hear.

“Wearing an acoustic garment, you might talk through it to answer phone calls and communicate with others,” says Yan, who is now an assistant professor at the Nanyang Technological University in Singapore. “In addition, this fabric can imperceptibly interface with the human skin, enabling wearers to monitor their heart and respiratory condition in a comfortable, continuous, real-time, and long-term manner.” 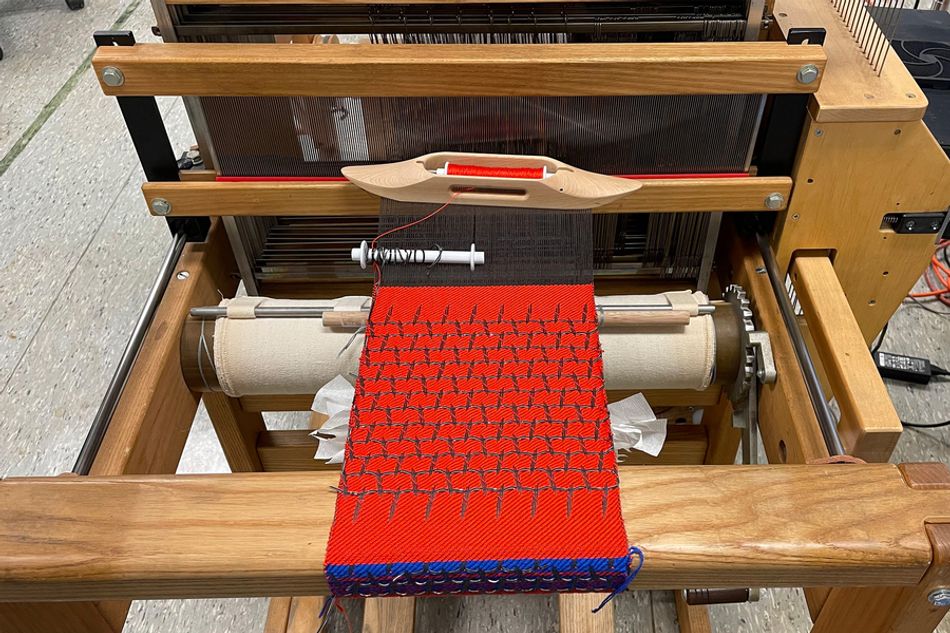 The acoustic fiber can be woven with conventional yarns using a traditional loom. Image: Courtesy of the Fink Lab

Fabrics are traditionally used to dampen or reduce sound; examples include soundproofing in concert halls and carpeting in our living spaces. But Fink and his team have worked for years to refashion fabric’s conventional roles. They focus on extending properties in materials to make fabrics more functional. In looking for ways to make sound-sensing fabrics, the team took inspiration from the human ear.

Audible sound travels through air as slight pressure waves. When these waves reach our ear, an exquisitely sensitive and complex three-dimensional organ, the tympanic membrane, or eardrum, uses a circular layer of fibers to translate the pressure waves into mechanical vibrations. These vibrations travel through small bones into the inner ear, where the cochlea converts the waves into electrical signals that are sensed and processed by the brain.

Inspired by the human auditory system, the team sought to create a fabric “ear” that would be soft, durable, comfortable, and able to detect sound. Their research led to two important discoveries: Such a fabric would have to incorporate stiff, or “high-modulus,” fibers to effectively convert sound waves into vibrations. And, the team would have to design a fiber that could bend with the fabric and produce an electrical output in the process.

With these guidelines in mind, the team developed a layered block of materials called a preform, made from a piezoelectric layer as well as ingredients to enhance the material’s vibrations in response to sound waves. The resulting preform, about the size of a thick marker, was then heated and pulled like taffy into thin, 40-meter-long fibers. 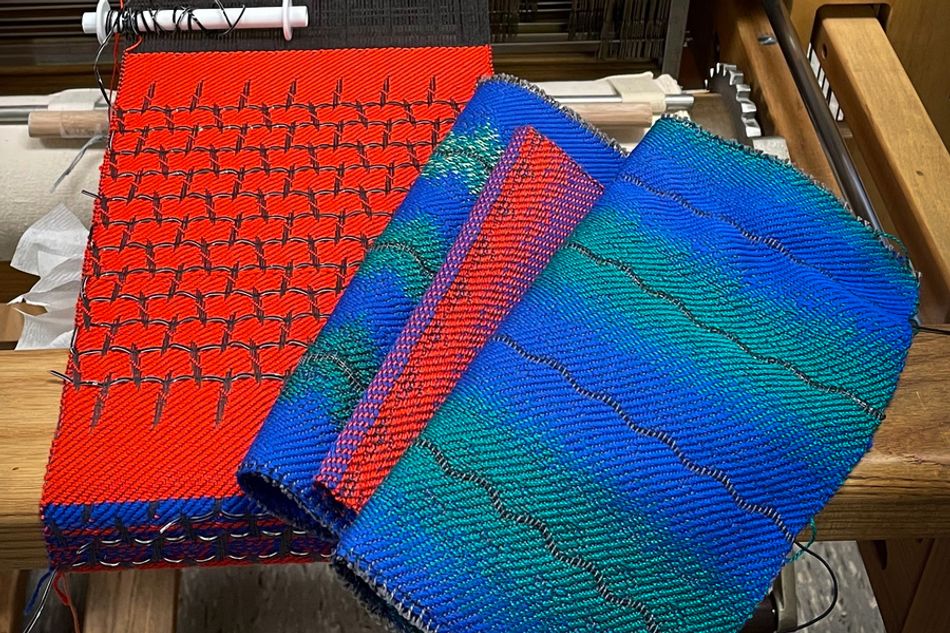 The researchers tested the fiber’s sensitivity to sound by attaching it to a suspended sheet of mylar. They used a laser to measure the vibration of the sheet — and by extension, the fiber — in response to sound played through a nearby speaker. The sound varied in decibel between a quiet library and heavy road traffic. In response, the fiber vibrated and generated an electric current proportional to the sound played.

“This shows that the performance of the fiber on the membrane is comparable to a handheld microphone,” Noel says.

Next, the team wove the fiber with conventional yarns to produce panels of drapable, machine-washable fabric.

“It feels almost like a lightweight jacket — lighter than denim, but heavier than a dress shirt,” says Meiklejohn, who wove the fabric using a standard loom.

She sewed one panel to the back of a shirt, and the team tested the fabric’s sensitivity to directional sound by clapping their hands while standing at various angles to the shirt.

“The fabric was able to detect the angle of the sound to within 1 degree at a distance of 3 meters away,” Noel notes.

The researchers envision that a directional sound-sensing fabric could help those with hearing loss to tune in to a speaker amid noisy surroundings.

The team also stitched a single fiber to a shirt’s inner lining, just over the chest region, and found it accurately detected the heartbeat of a healthy volunteer, along with subtle variations in the heart’s S1 and S2, or “lub-dub” features. In addition to monitoring one’s own heartbeat, Fink sees possibilities for incorporating the acoustic fabric into maternity wear to help monitor a baby’s fetal heartbeat. 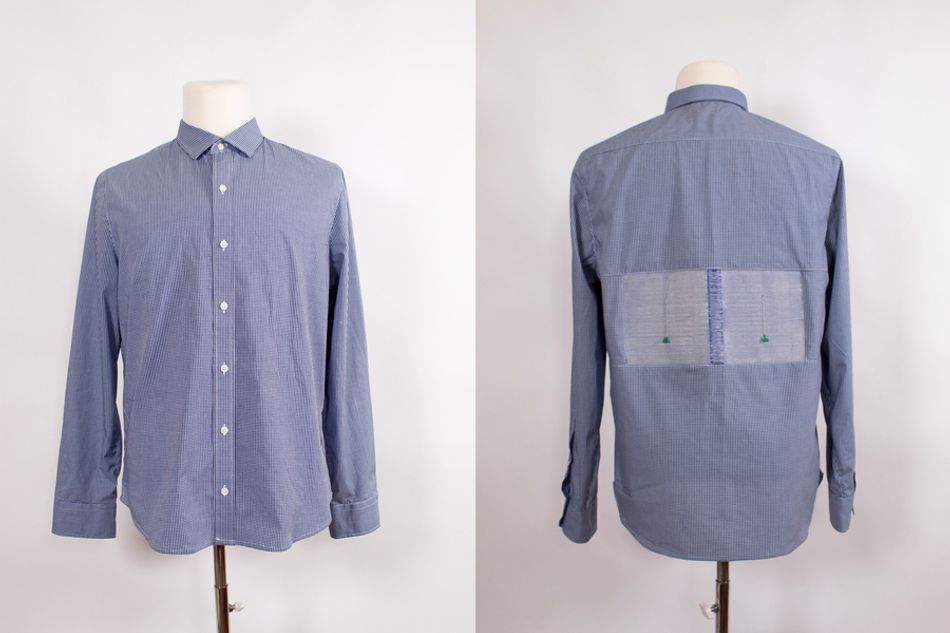 Two panels of acoustic fabric sewed to the back of a dress shirt are able to determine the direction of sudden sounds such as handclaps. Image: Courtesy of the Fink Lab

Finally, the researchers reversed the fiber’s function to serve not as a sound-detector but as a speaker. They recorded a string of spoken words and fed the recording to the fiber in the form of an applied voltage. The fiber converted the electrical signals to audible vibrations, which a second fiber was able to detect.

In addition to wearable hearing aids, clothes that communicate, and garments that track vital signs, the team sees applications beyond clothing.

“It can be integrated with spacecraft skin to listen to (accumulating) space dust, or embedded into buildings to detect cracks or strains,” Yan proposes. “It can even be woven into a smart net to monitor fish in the ocean. The fiber is opening widespread opportunities.”

“The learnings of this research offers quite literally a new way for fabrics to listen to our body and to the surrounding environment,” Fink says. “The dedication of our students, postdocs and staff to advancing research which has always marveled me is especially relevant to this work, which was carried out during the pandemic.”

Getting hands-on with Xsens DOT

Getting hands-on with wearable sensors at Shanghai Jiao Tong University