Wevolver is a platform & community providing engineers informative content to help them innovate. Wevolver reaches millions of engineers every month in a very specific demographic: over 41% of them are between 25 and 34 years old, and less than 10% are older than 44. Geographically, European countries represent 28% percent of the audience, the USA 26%, and beyond India's 10%, the audience is spread widely across the globe.

This provides a unique opportunity to learn about this engineering generation's interests, concerns, and points of view. Previously other interesting reports have been published by engineering organizations: For example, Hackster.io reported in 2016 on the maker community, Fictiv holds a yearly survey among mechanical engineers (primarily in the US), and IEEE conducts their 'Pulse of Engineering' report. We think that Wevolver's 'Engineering State of Mind' research complements those because of the specific demographics of its audience, as well as the report's specific focus on how this cohort views the world.

Now let's dive deeper into the results of the survey. Starting with the demographics: 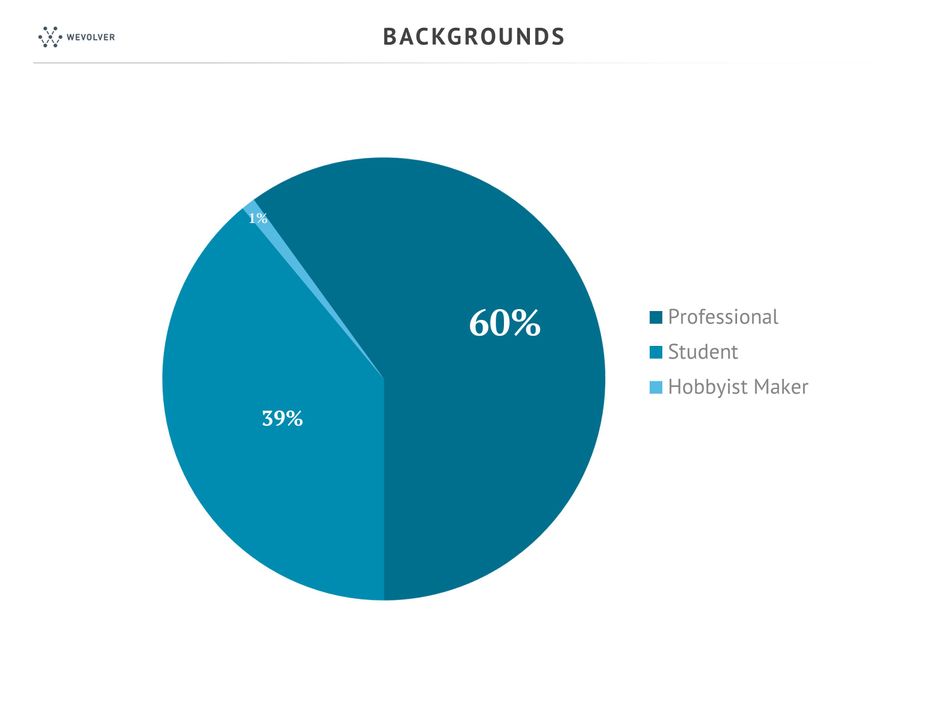 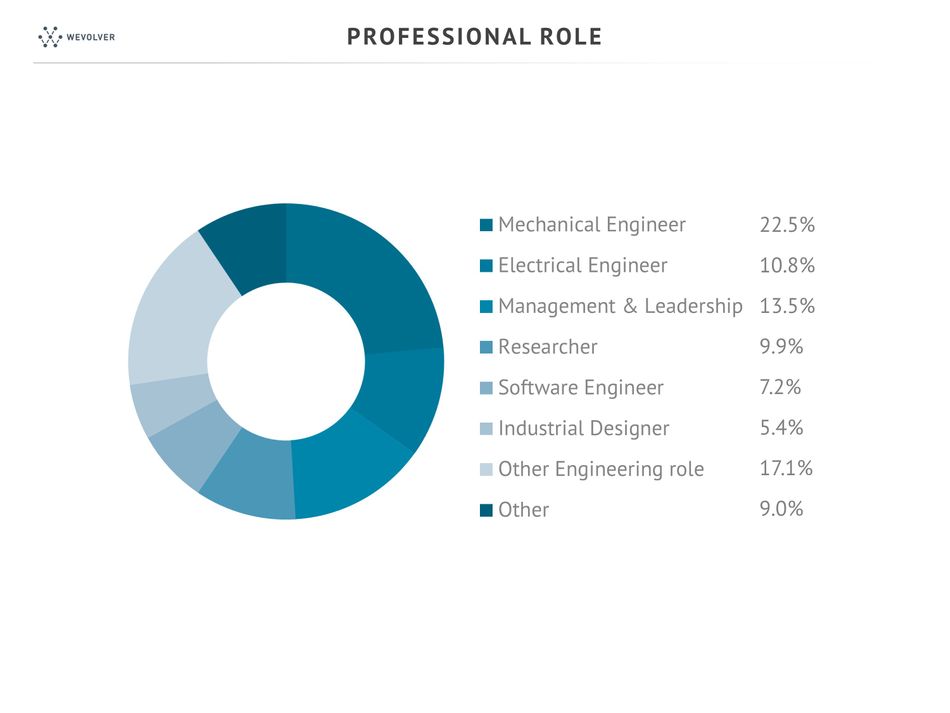 Only 1% of survey respondents label themselves as a Hobbyist Maker. At the same time, we know from conversations we've had that many professionals do perform 'Maker' activities in their spare time: Examples range from developing electric motorbikes to tinkering with 3D printing.

Among the professionals the majority has a role in engineering; beyond the most represented roles such as Mechanical Engineer, Electrical engineer, and Software engineer, there is a whole range of disciplines; Chemical Engineer, Civil Engineer, Biomedical Engineer, etc. There is also a significant amount with a pure leadership role, many of which who have been trained as an engineer, and 9.9% works as a researcher. Other roles that were expressed include education, analyst, and helicopter pilot.

Among students disciplines include Mechanical and Electrical Engineering, Robotics, Aerospace, and Computer Science.

These roles are applied in a wide range of industries, as we'll see next: 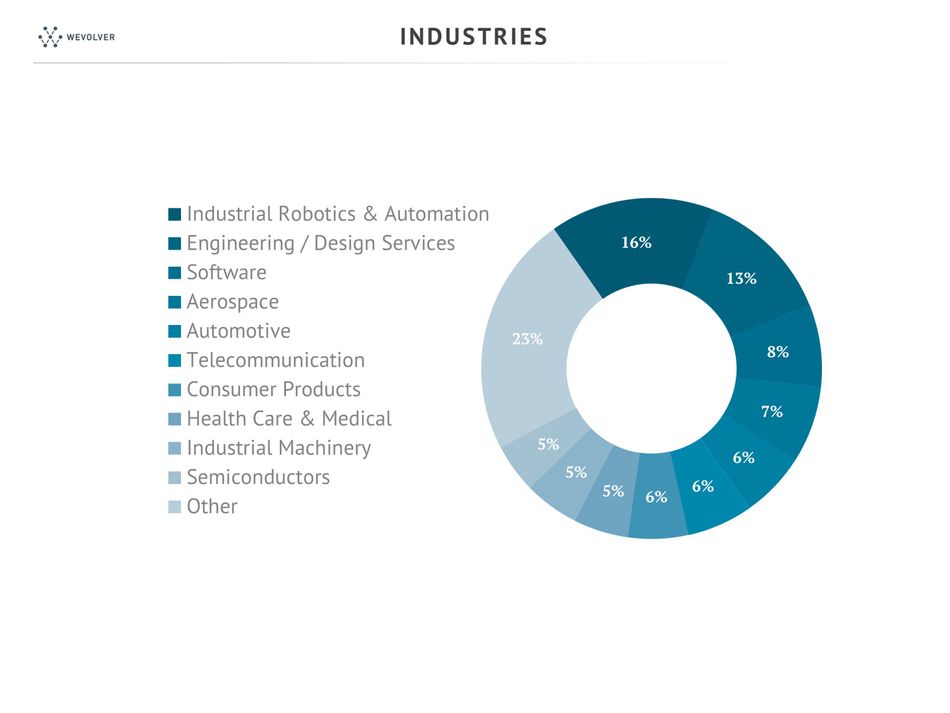 Sixteen percent of respondents are active in the Industrial Robotics & Automation industry (interestingly, as you’ll see later, a much larger group (over 66%) of all respondents actually lists robotics as the topic they are most interested in).

Services, ranging from manufacturing to engineering and design services, are also strongly represented, and software is a third runner up. Beyond those, our respondents’ industries cover a wide range. Other industries mentioned include VR, Art & Design, Chemical, Naval, and Aeronautics. 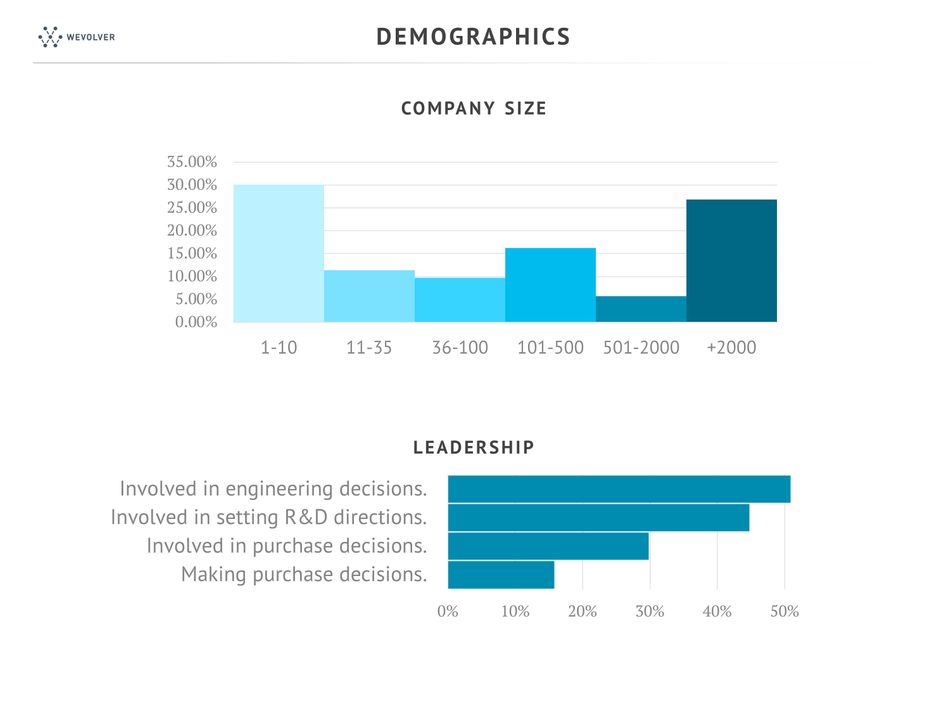 It appears that engineers have a voice: The majority is involved in day to day engineering decisions, and many are involved in determining the direction of their company's R&D. When we zoom in, we see that the percentage of engineers being involved in setting R&D directions is significantly higher at small and medium size companies (64% versus 44% at companies over 500 employees).

We could label this cohort as relatively young (with 91% being below 44), well educated, and representing quite a wide range of industries and company types. These people work in the most innovative companies in the world and are responsible for developing the products and technologies we'll use. Furthermore, the influence of this cohort is likely to increase as they progress in their careers and continue to grow their skills, experience, and knowledge.

Therefore, we think the perspective of this community matters and that’s what we’ll dive into now. 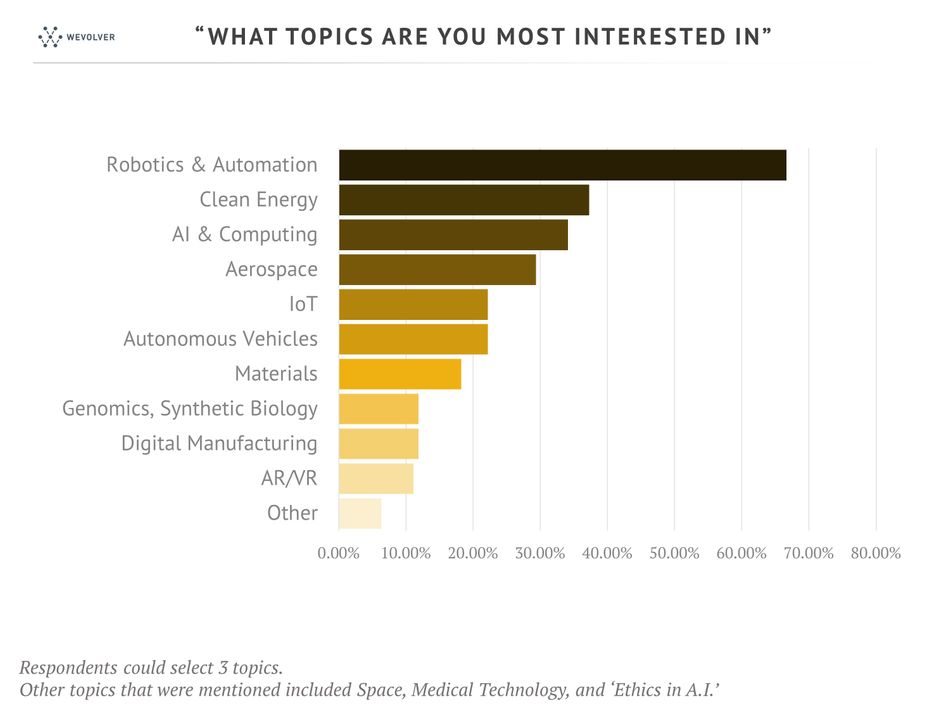 We inquired which topics these engineers are most interested in to learn about. The results from the survey correlate with what we see are the most popular content topics on the Wevolver platform.

Robotics & Automation dwarf other topics of interest. This is interesting as only 16% of respondents are actually active in the industrial robotics and automation industry. Clean Energy is a good runner up which is not surprising given the concerns engineers have about climate change and environmental issues. In that light, Clean Energy could have scored even higher. One explanation might be that engineers think sustainability challenges need to be tackled on many facets, as we'll see later in the survey (for example, one respondent commented how advances in quantum computing could help solve complex environmental issues).

The strong interest in A.I. and other computing advancements (including big data and quantum computing) is in line with the rapid developments in this field, as well as with the point of view from engineers that A.I. as a technology is strongly under-appreciated. Worth noting is that A.I. forms an essential component of the topic of robotics as well as of autonomous vehicles (autonomous vehicles sits among the top 3 topics for over 21% of the survey respondents as well). Respondents also mentioned their interest in the ethics involved in A.I. We consider the relatively low interest in AR/VR surprising compared to the size of the interest (or hype) in media and venture capital.
Engineers have many interests, and other topics mentioned include medical technology, astrophysics, and; "literally everything." 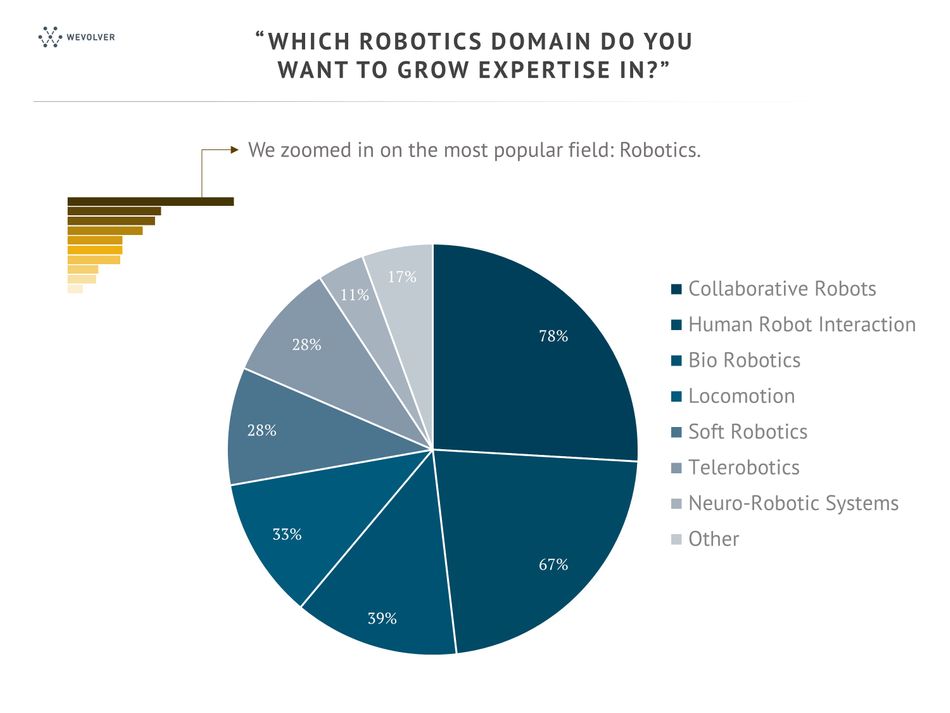 Given the sizable interest in Robotics we zoomed in on the people interested in this topic and explore which subdomain they are focused on. In this instance we enquired specifically which fields engineers wanted to grow expertise in. Our view is that this question reveals being active or an interest to become active in the chosen domain, beyond being purely interested an sich. This gives an indication of the importance engineers deem the domain to have in the future.

Both Collaborative Robots ('cobots') and Human-Robot Interaction are the big standouts here. These two topics also overlap and are related:
Collaborate Robots are defined as “robots intended to interact with humans in a shared space or to work safely in close proximity. Cobots stand in contrast to traditional industrial robots, which are designed to work autonomously with safety assured by isolation from human contact.

Human-Robot Interaction (HRI) describes the studying or designing of robotic systems for use by or with humans. Developing collaborative robots requires designing how humans engage with these machines and through which interfaces. Apart from its application to collaborative robots, HRI applies to many (if not all) fields in robotics, especially with the growing cognitive capabilities of robots this field has seen significant growth.

Cobots and HRI stand out, which can be expected given the growth and size of both fields. In our eyes, the most remarkable result is the significant interest in the domain of bio robotics. At the moment this field is tiny from a commercial perspective but apparently expected to grow in importance. 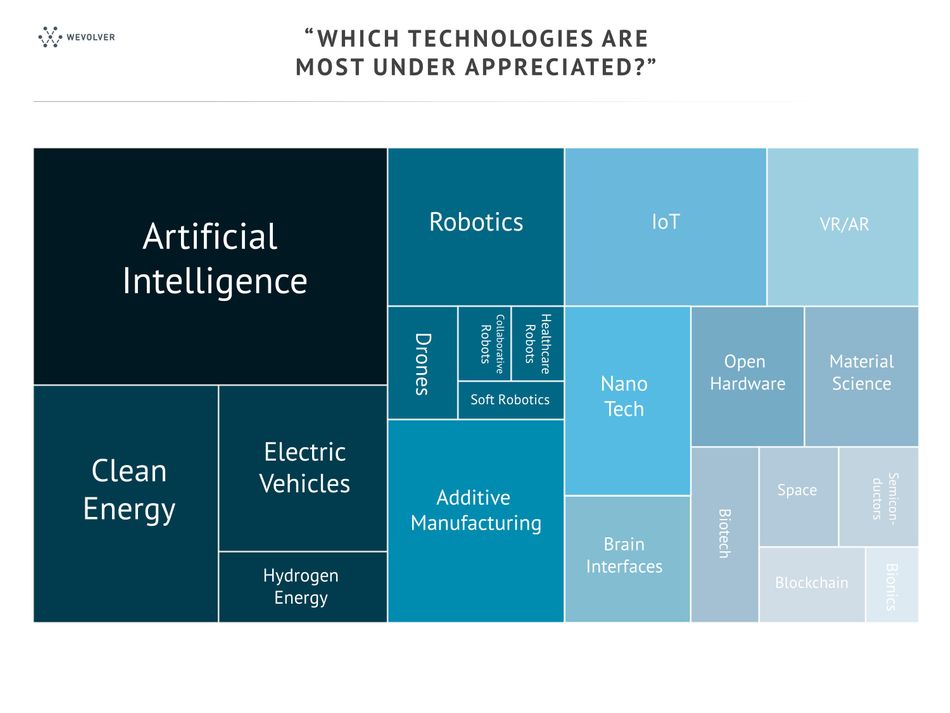 This question reflects the impact engineers think a given technology will make in comparison to the attention the technology receives from society. Here engineers point to a clear conclusion: "A.I.  will be huge, and society doesn't see how big its impact will be." We found this result striking because, at first glance, there doesn't seem to be a lack of attention to A.I. in media and within companies. However, engineers think the impact of A.I. will be orders of magnitudes bigger than reflected by that amount of attention. Secondly, people we spoke with indicated that their perspective is most of us don’t conceive how much of our lives and society will change because of implementations of Artificial Intelligent systems

Engineers point out that the implications and impact of A.I. are significantly bigger than what people generally expect.

Up to this point, the survey uncovered unexpecting insights. On top of that, the one that completely stopped us in our tracks was the absolutely unanimous answer to our question about challenges the world faces: 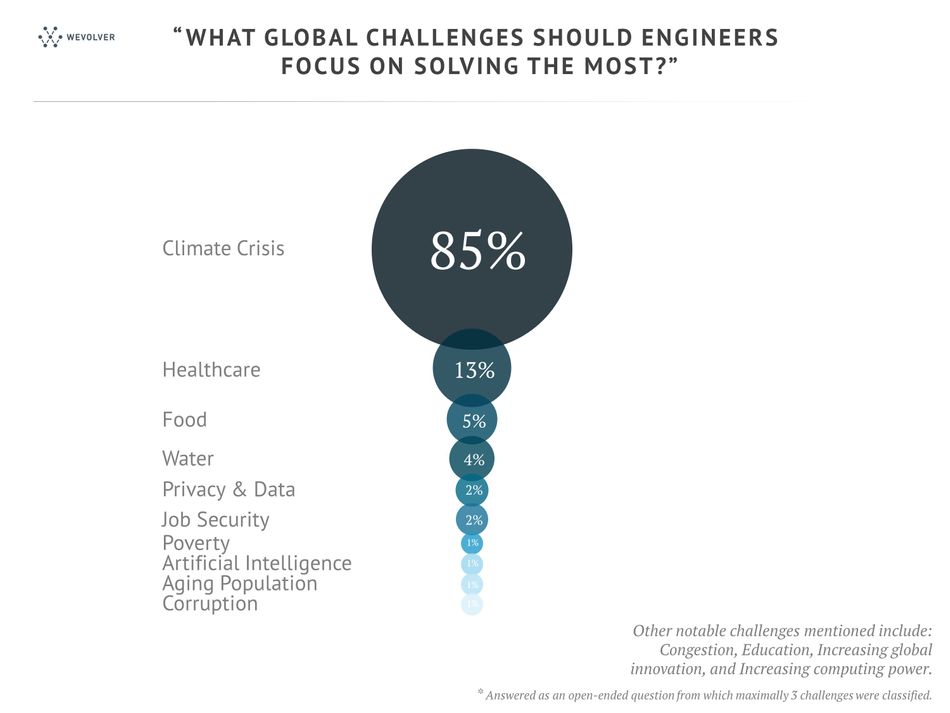 Take note: The smartest minds on our planet are deeply worried about the health of our environment. This topic overshadows seemingly high impact challenges as poverty and healthcare, and even the potential negative aspects of A.I. are seen as a significantly impactful challenge. As one said, "Without a healthy habitable planet, nothing else matters."

Respondents had to answer this question in an open-ended way. After the survey, we classified all responses. Climate change, environment, and clean energy were so often mentioned in a single answer and used interchangeably that we decided to classify them under a single banner. Note that the survey was held over the summer, before the current global climate crisis strikes and relatively heightened attention to the topic.

We had expected a wider distribution of challenges, and for example expected a higher attribution to robotization and employment. At the same time, high concerns about our environment correspond with the activity we see happening in Wevolver's community: discussion threads about the topic consistently generate a high level of engagement, and any knowledge share on the topic is likely to spark a high amount of interactions.

"Without a healthy habitable planet, nothing else matters."

We perceive this cohort of engineers being relatively strongly socially engaged. Socio-economic issues and the ability to contribute matter to them. This is reflected in the results of our inquiries into these engineers' concerns, interests, and world view. You cloud also label them as relatively 'techno-optimistic:' Many think technological advancements can solve current challenges, or at least need to play an essential role in solutions.

Engineers ride an interesting balance. Generally optimistic about the role that technology plays, they also are more clearly aware of its current state and limitations.
For us, the research's insight into engineers' concern about our environment has been the most striking and we think it’s a telltale sign. Based on this research, we have increased the informative content we share about this topic, as well have started more discussion threads and Q&A sessions to grow the available knowledge and engagement.

A.I. and robotics are the two big other topics that engineers pay attention to. According to engineers, our society underappreciates the impact of A.I. Besides this, we think that the research also points to a discrepancy between the interest of engineers in robotics, and the level of attention the subject gets from the general public, media, and politicians. We recommend leaders to take note of this, and increasingly opening up the conversation with the people who are developing today's and tomorrow's technologies. Ultimately, engineers are the ones who can most clearly see both capabilities and limitations of technology, as well as its future directions.

We'd like to thank all survey participants, as well as our community members who helped spread the survey.
Please share your feedback and questions, we're looking forward to hearing from you.

On behalf of team Wevolver;

Wevolver is a platform & community providing engineers informative content to help them innovate. Wevolver reaches millions of engineers with articles, project descriptions, videos, and engaging conversations about state of the art technology that enable to keep up to date and find knowledge when engineering.

The information on Wevolver's platform is created by a community of engineers, Wevolver's network of academic researchers, and editorial staff. Companies can sponsor content on the platform.
For this work Wevolver won the SXSW Innovation Award, the Accenture Innovation Award, and the Top Most Innovative Web Platforms by Fast Company.
Wevolver is how today's engineers stay cutting edge.

$200,000 prize money is available for solutions to challenges that are posed by four leading nonprofits.

We reviewed the entries to the open challenges since the start of the competition. Here are some of the projects to keep an eye on.