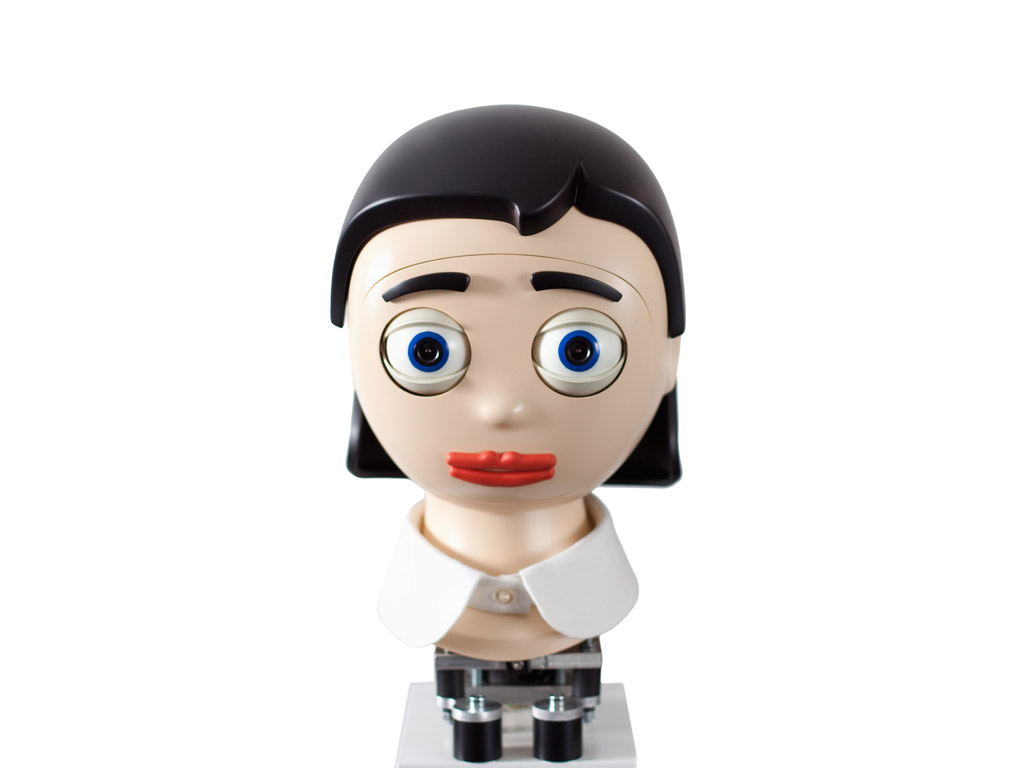 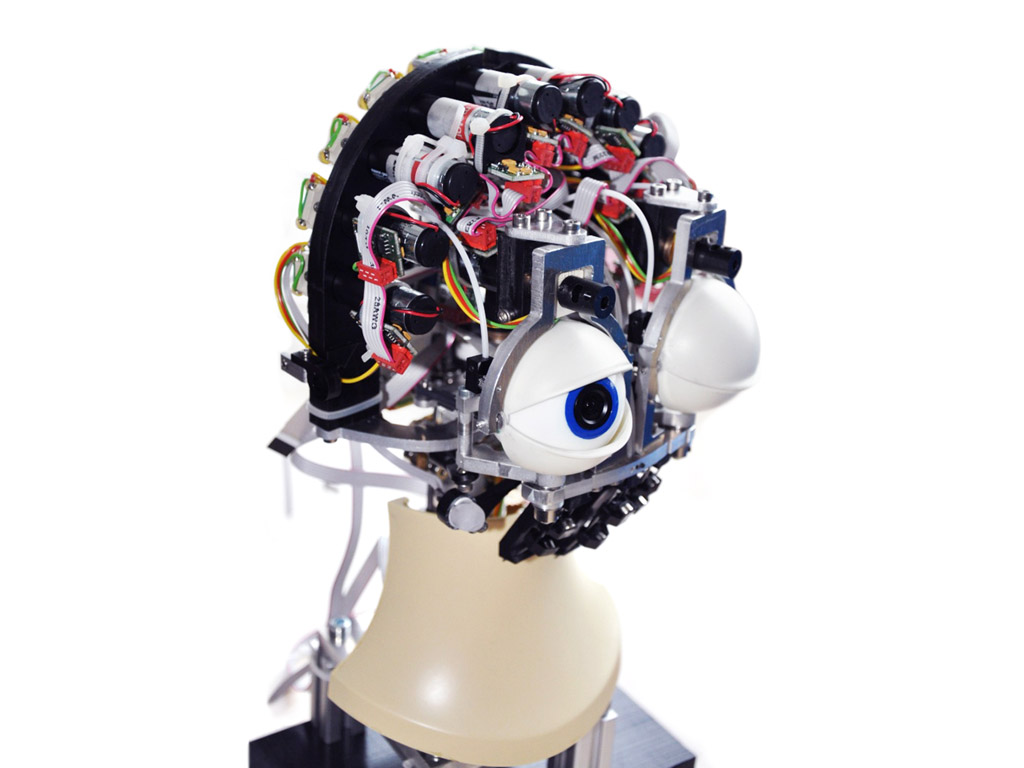 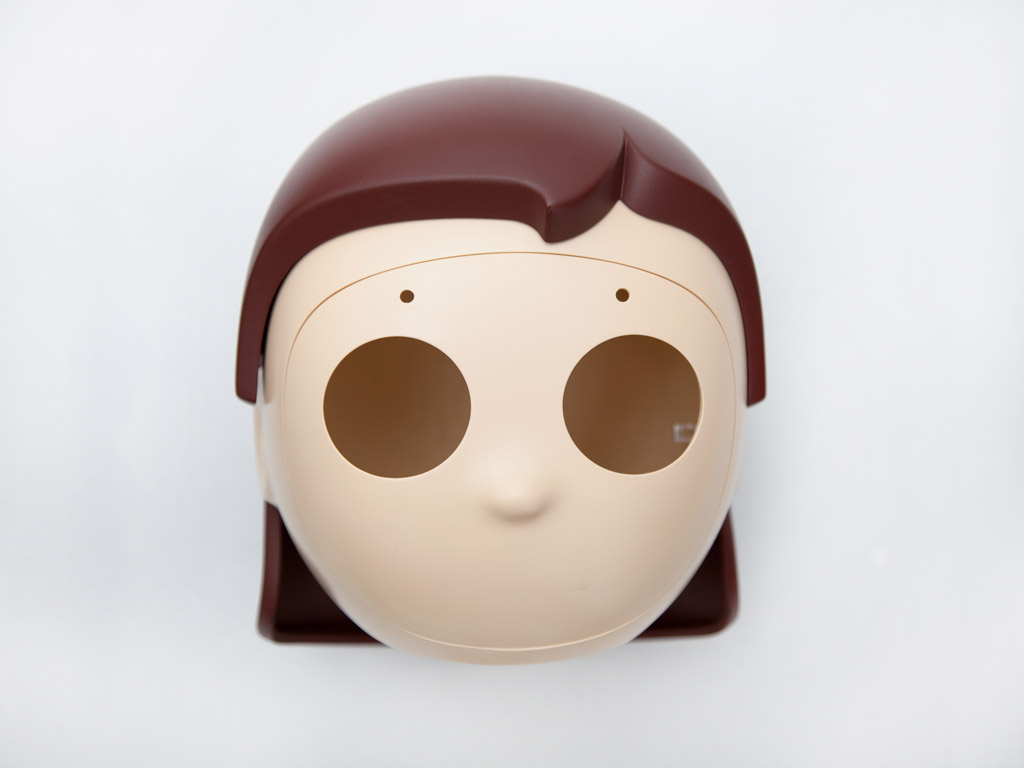 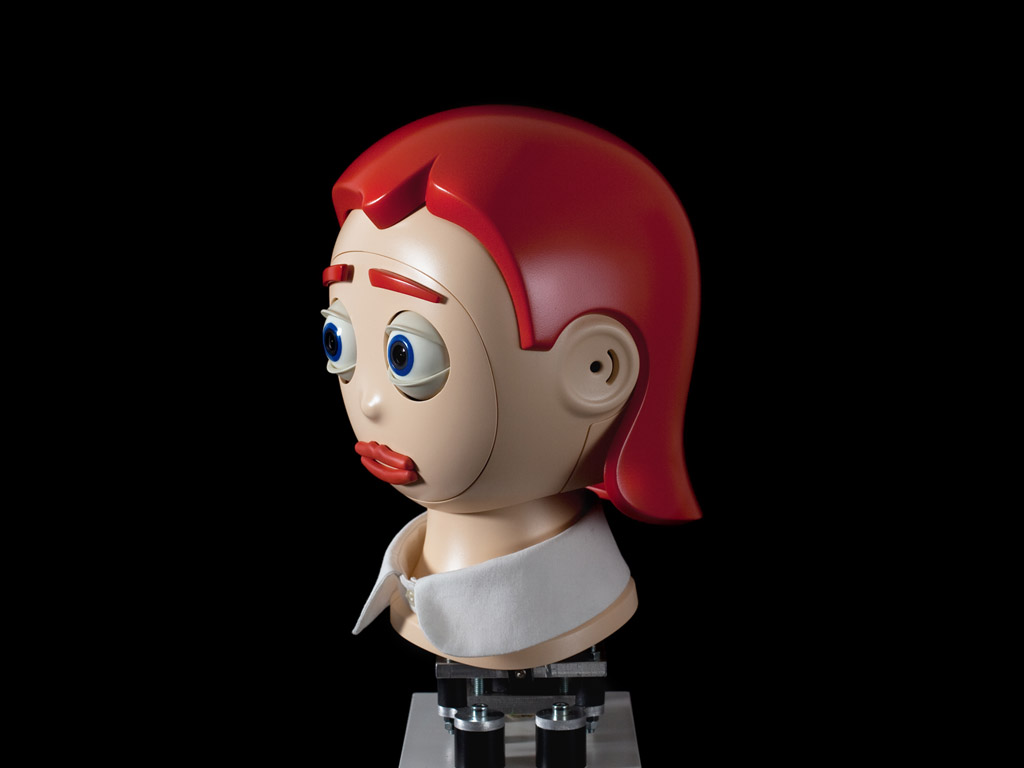 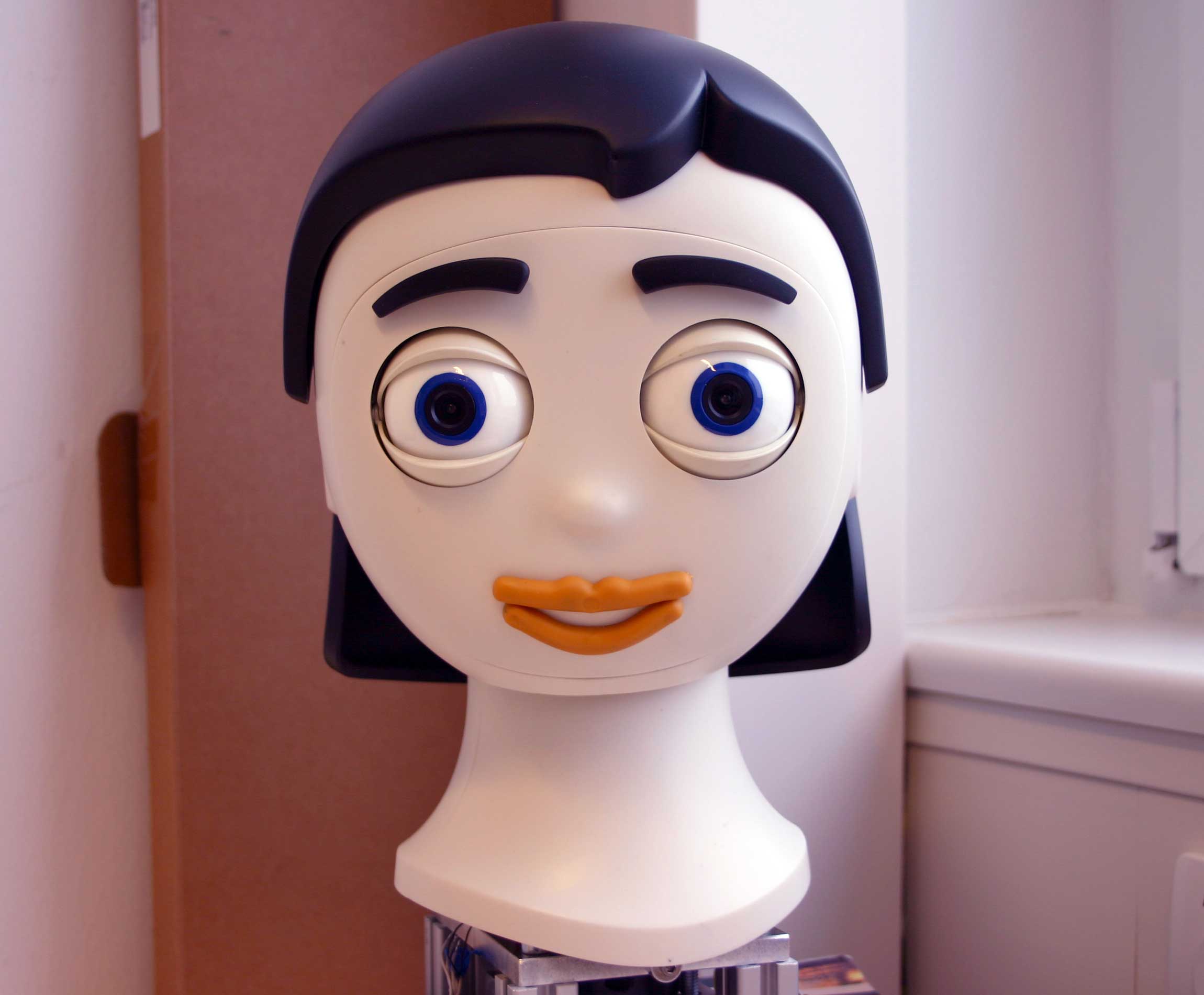 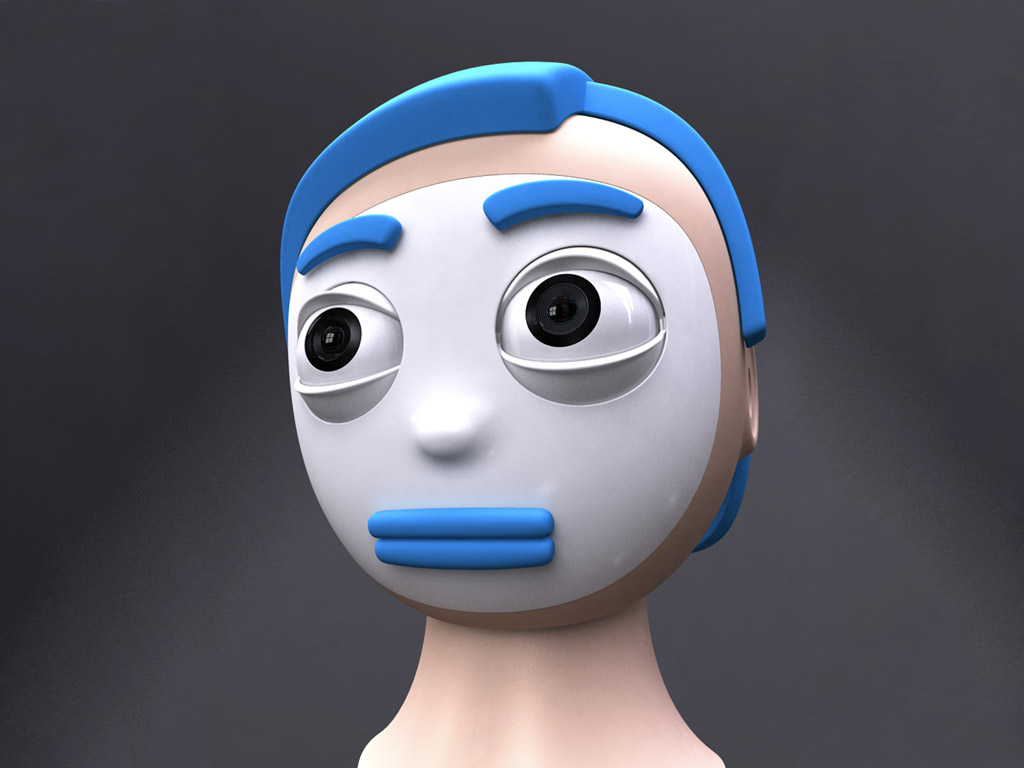 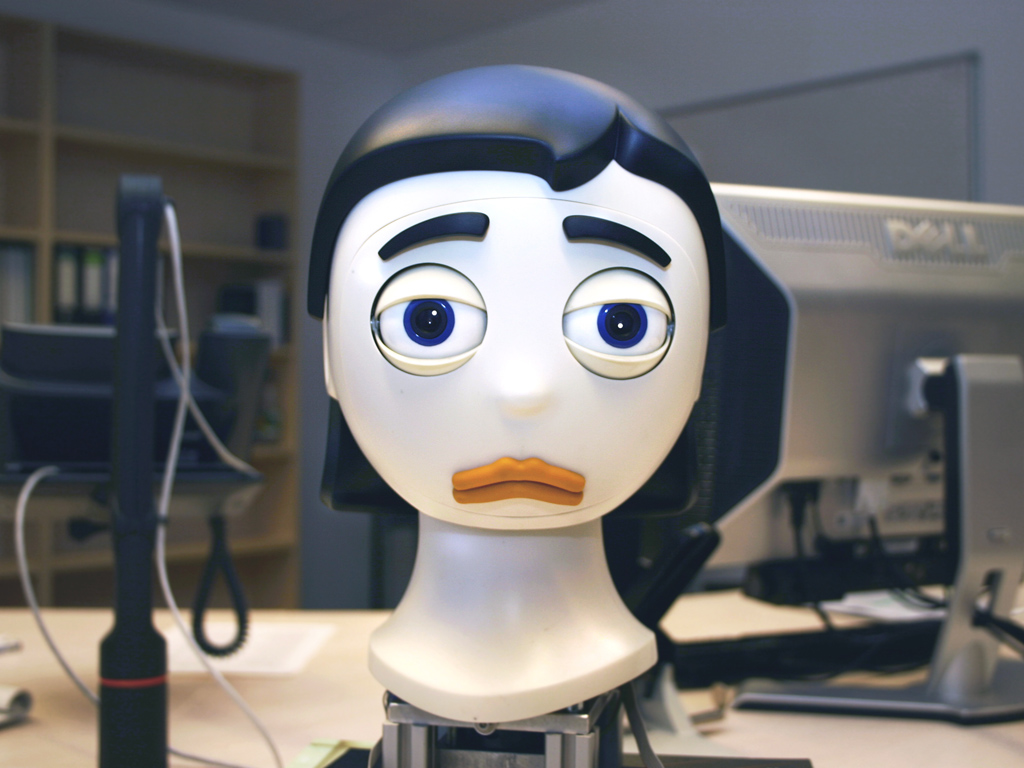 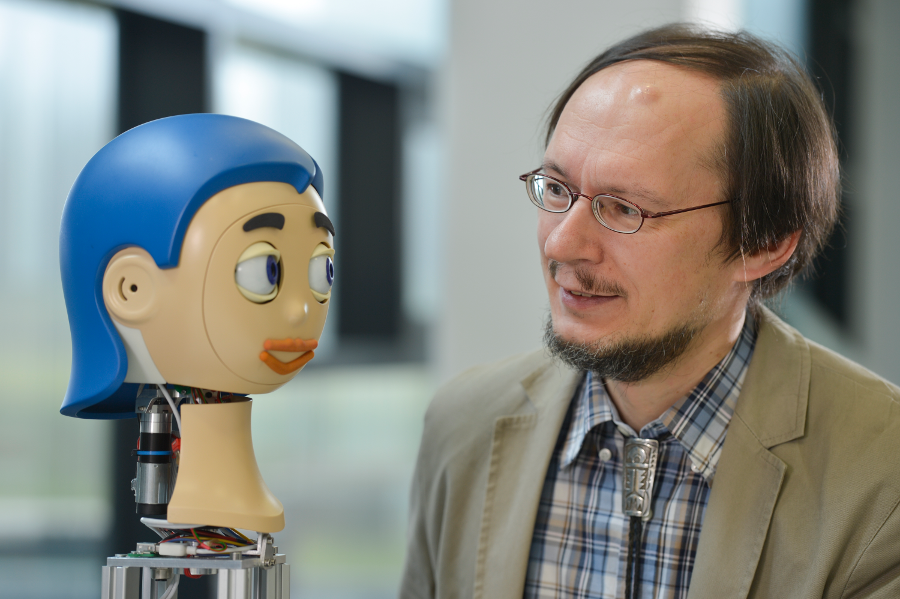 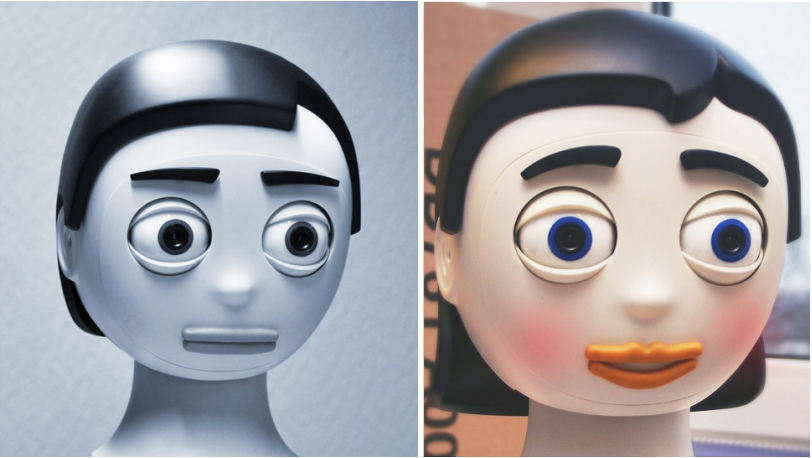 The robot can display primary and secondaryemotions in a human-like way, to enable intuitive human-robot-interaction.

Flobi has high-resolution, wide-angle stereo vision, gyroscope motion compensation and stereo audio. The head is self-contained, and has 18 actuators, sensors and control boards.

The core structure provides anchor points for the mask, the sensor and the exterior expression elements; the eyebrows and lips.

Flobi has a tendon-mechanism, allowing placement of the motors away from the joints.  Most of the motors are placed on a circular support in the middle of the head, to achieve an even weight distribution. The motor axis is connected to a triangular wedge, that converts rotary motion to a pull and push motion, driving a bowden cable. The motors used in the upper head are Maxon type 203893 with gear ratio 67:1. These motors are also used for eye-motion but here, static levers are used to actuate the eyes.  All motors are equipped  with encoders for velocity control.

Temperature sensors have been added on each actuator, to ensure safety power-down in the event  of overheating the robot.

The neck is actuated  using  Faulhaber 2224 DC motors, with gear ratio 66:1 for the tilt and swing and 43:1 for the pan axis. These motors are compact and provide maximum torque.

The lips are coupled with magnets to a sliding joint that is placed under the mask. Each lip has three points of contact (left, middle, right), with individual actuation. The sliding joints for each respective point of both lips are mounted on a common guide, so that the motion ranges may overlap.

Flobi has two Point Grey Research “Dragonfly 2” cameras in  a  remote-head configuration that separates the sensor board from the image processing components. The sensor is placed directly into the eye-ball of the head, with the larger processor board attached at the rear. The robot is equipped with  a 1036x  776 @30fps color RGB sensor and M12 micro lenses with 4mm focal length, translating to a visual field of 94◦ degrees.

Flobi uses one 2-axis gyroscope from  InvenSense (IDG-600) and one 1-axis gyroscope from Epson (X3500W) on a separate circuit  board. This  board  comes from a Nintendo Wii-Motion Plus controller and is placed inside the head.The sensor is directly connected to the motor controller without any intermediate processing on a  PC.  Because all processing is done in realtime on themotor controller board itself there is no bus induced latency.

The robot's head has a modular surface construction so that different characters can becreated. The individual parts can be combined and are attached to the frame using magnets. It also enables quick access to the hardware.  The face and neck masks can be removed in a few seconds while leaving the rest of the mask in place. The only visible part of the face that can not be replaced easily are the eye-lids and eye-balls.

Flobi has a custom designed circuit board for critical calculations and control loops. Calculations that suffer from delays and are timing sensitive are done directly on the motor control board.  The circuit board was designed to be as small as possible in order to fit inside the head, and is currently 37 mm by 68 mm. The board is based on an 8 bit Atmel XMega64 microprocessor which has 64KByte Programflash, 4KByte SRAM and is running at 32 MHz. All motor control boards (slaves) and the host PC (master) are connected to one bus that is using differential signaling (RS422) to reduce serial errors caused by to the electricallynoisy  environment.

Four LED ́s project a diffuse white or red light onto the cheek surface. This technique gives the robot the ability to change the color of its cheeks to show different states of emotion.

Discusses the design of the robotic head's movement methods and components such as motors and sensors. Also includes a survey with a group of perticipants in order to test emotion understandibility across a spectrum of displayed emotions.

Outlines the key concepts of industrial design, and provides results of initial studies that were conducted to evaluate the robot. Presents a conclusion and recommendations for prospective research.