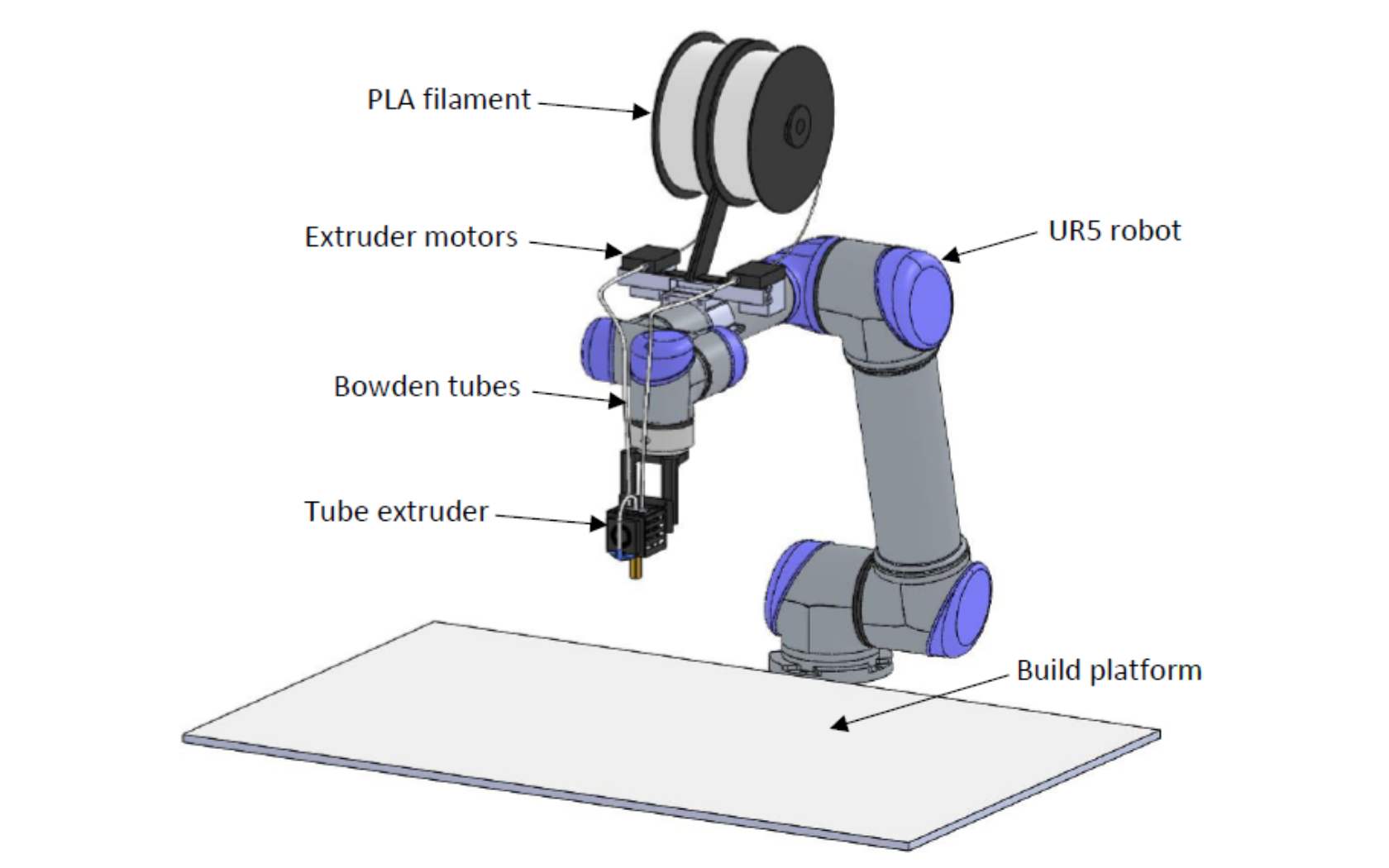 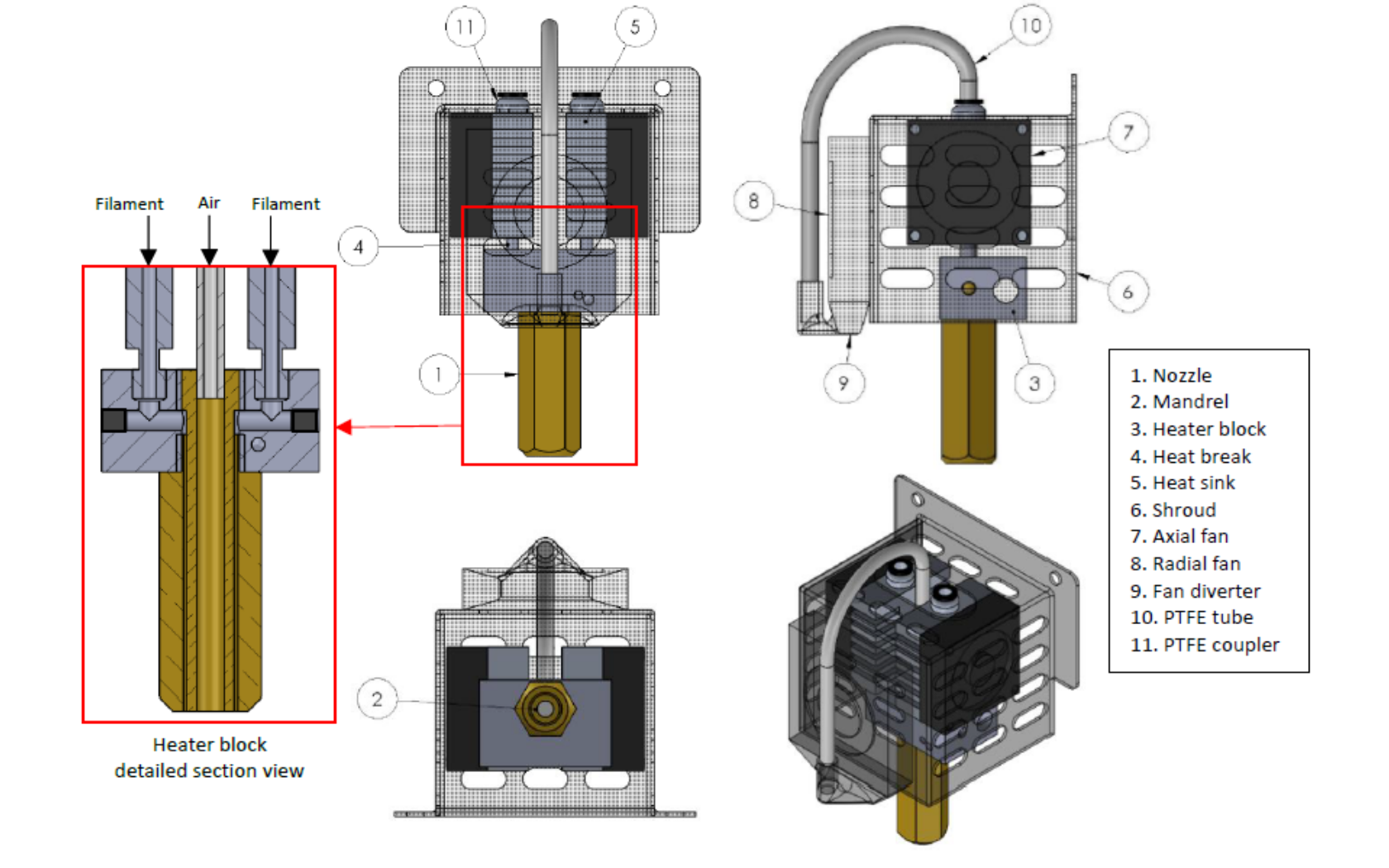 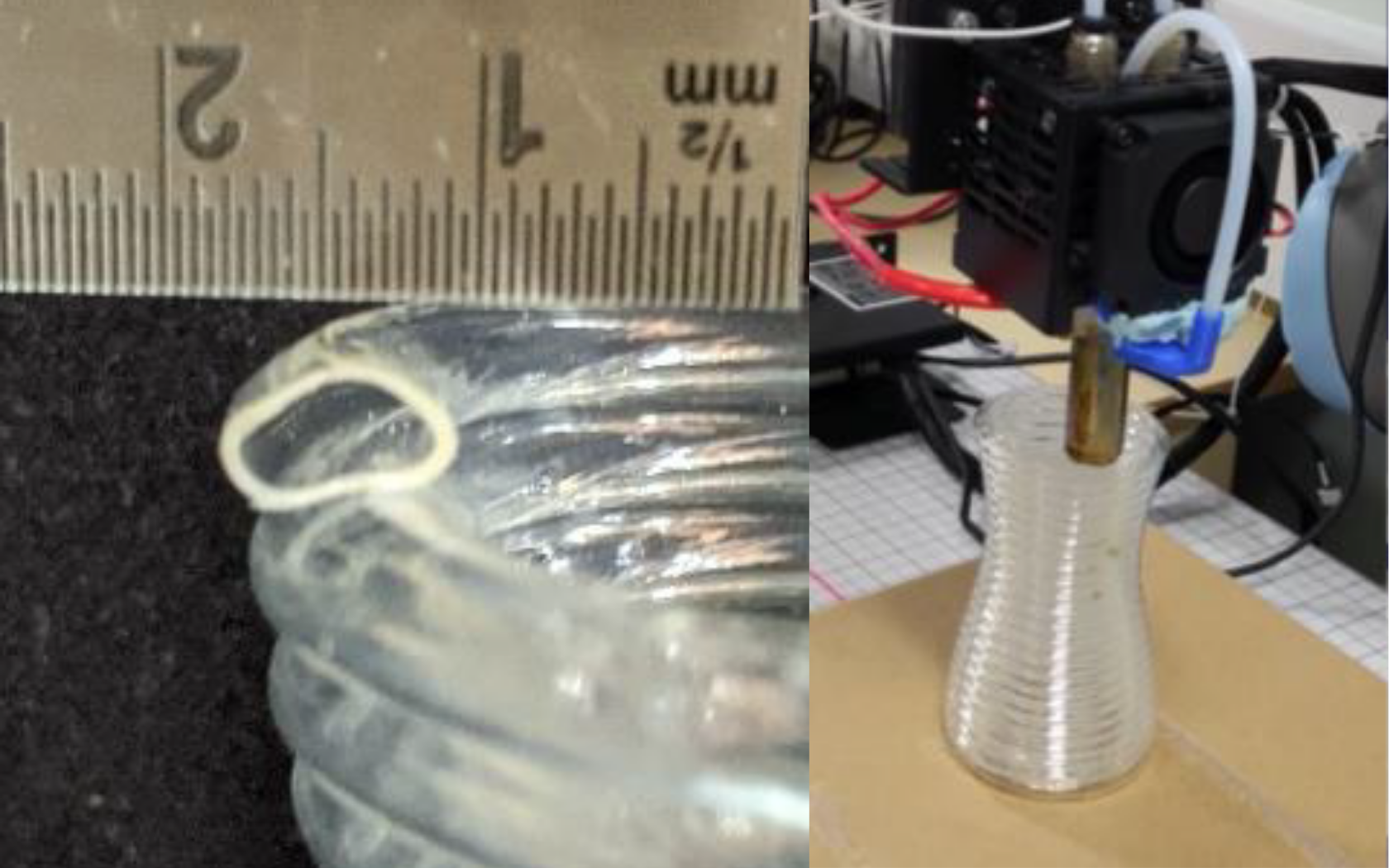 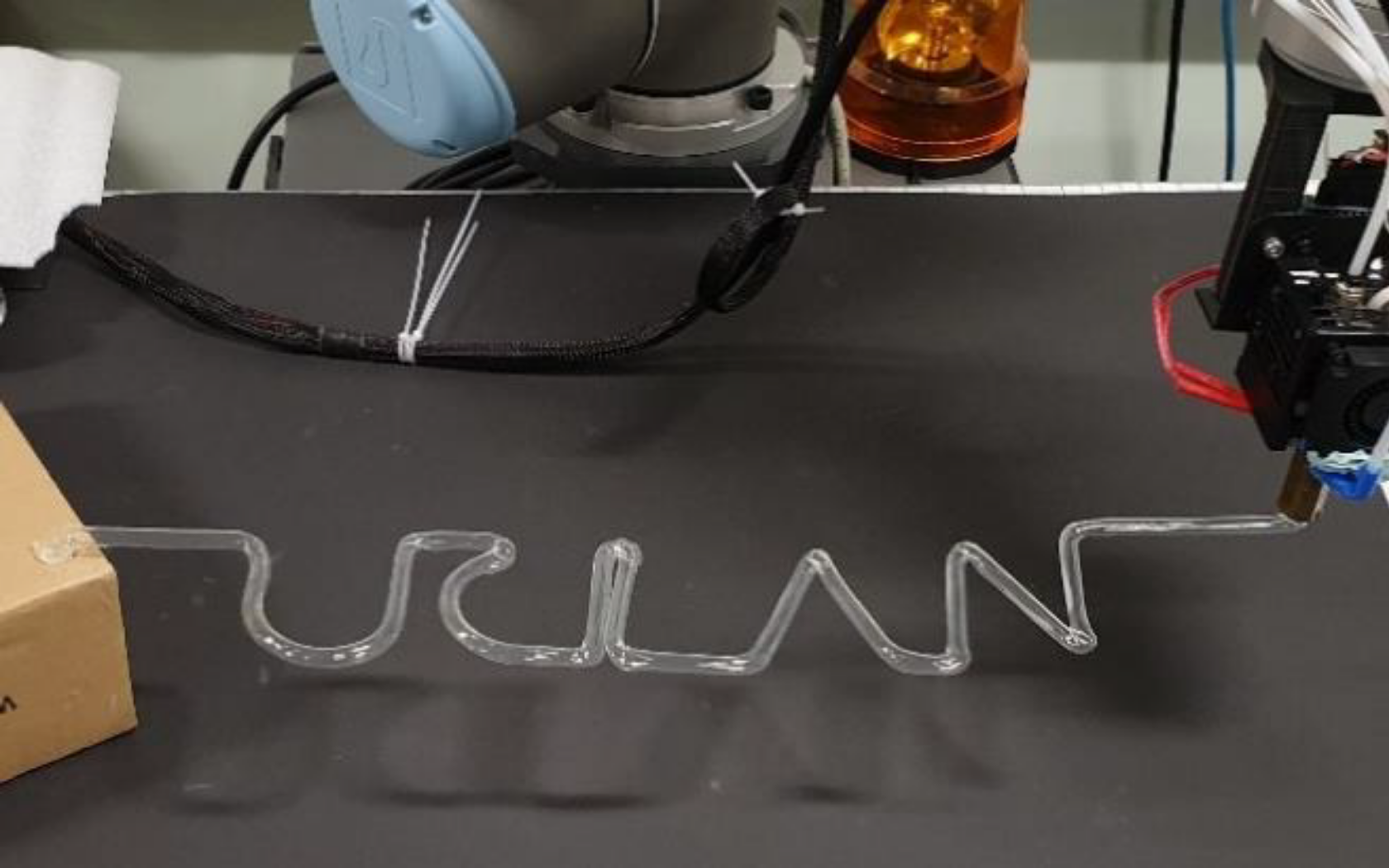 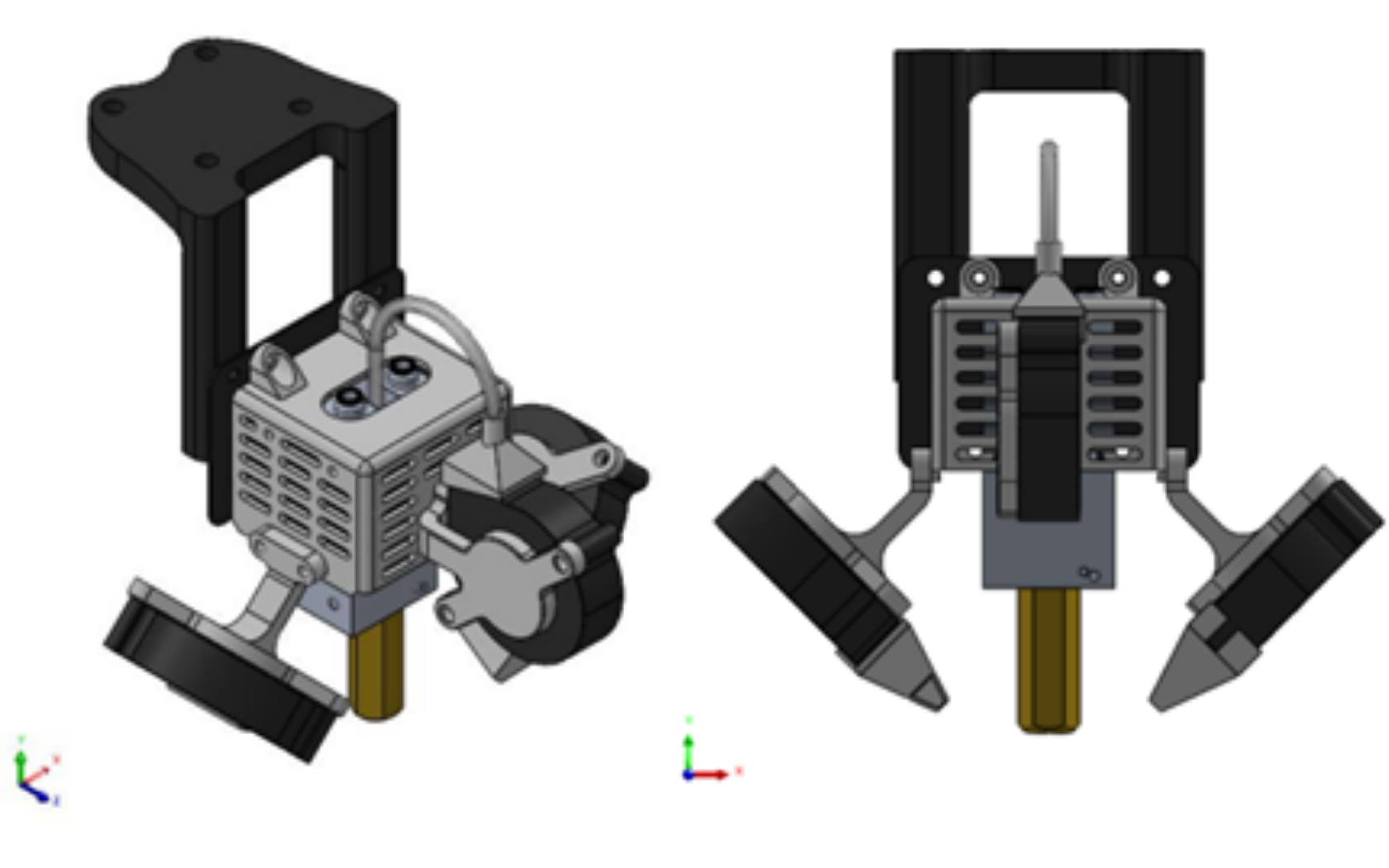 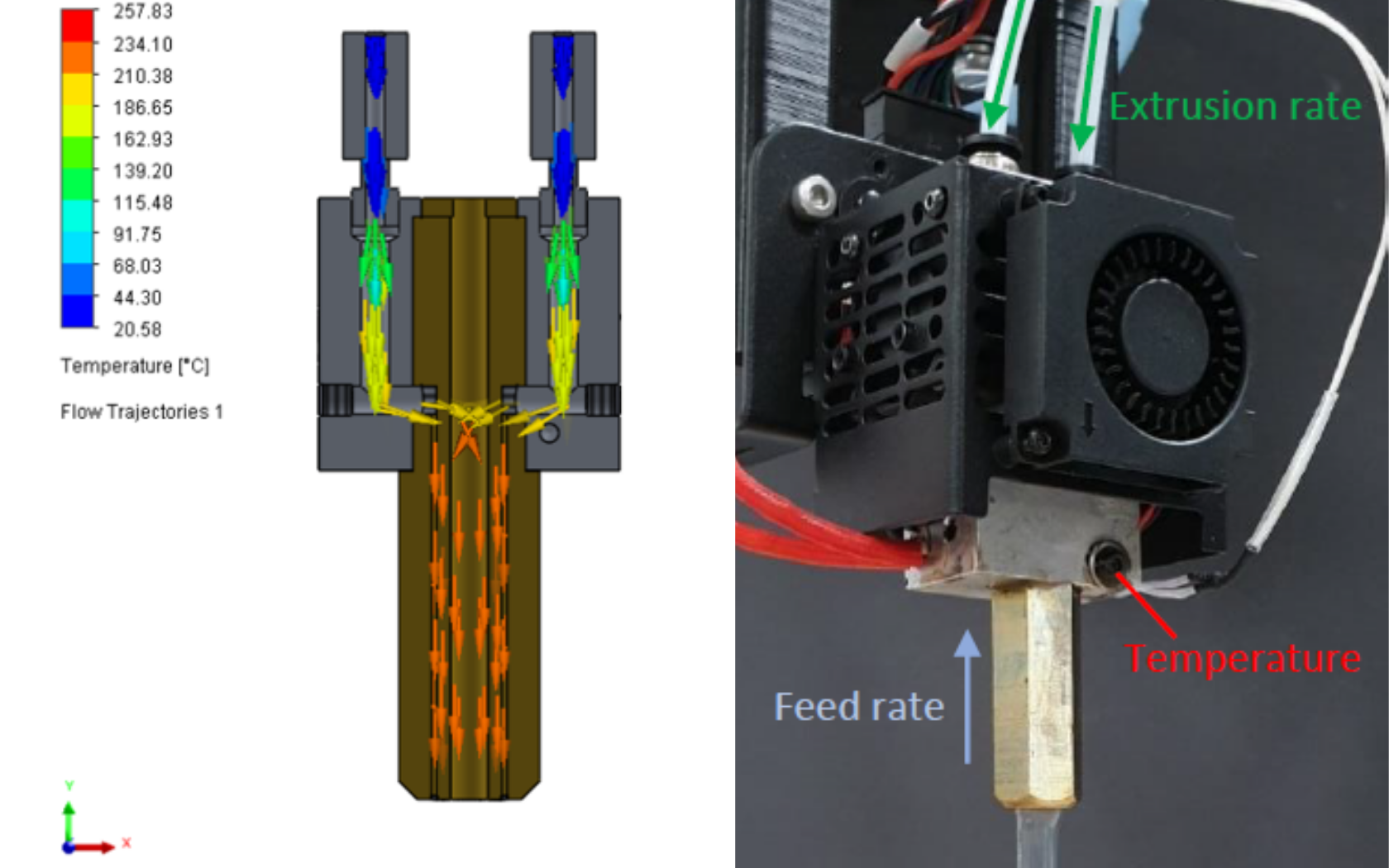 This tech spec was submitted by Ruben Janse van Vuuren as part of the University Technology Exposure Program.

The custom extruder design of AMTEx is composed of four main components: the filament feeder, heater block, hollow mandrel, and a cooling system.

The design features two extruder motors and filament spools to produce a symmetrical polymer flow into the heater block. Filament meets inside the heater block for the melting process. Melted polymer flows around a hollow mandrel inside the nozzle, with an 8mm outer diameter and 7mm inner diameter, to form the tube shape extrudate. The space within the tube provides a route for air from a radial fan to enter for pressurization to maintain the tube shape. A measured volumetric flow rate of around 26mm3/s from the AMTEx extruder is about 2.5 times more than a standard 3D printer with a 0.4mm nozzle. An active air-cooling system is used to facilitate a faster extrusion rate. Two battery-powered 50mm fans located on the sides of the nozzle are used for part cooling of exiting polymer. The air flows through the fan ducts and directly onto the extrudate after exiting the nozzle.

Tubed extrusion yields significantly increased surface area compared to the conventional methods. Since AMTEx produces outputs with a higher surface area, there is a decrease in the material usage and printing time to make the same output with the FFF technique. The convective heat transfer is also reduced to a minimum due to the tubed-shaped nature of the extrusion, thus allowing tubed extrusion to cool faster than rod-shaped extrusion.

The AMTEx tubes displayed an almost identical stiffness but higher strength and ductility when compared with traditionally printed FFF tubes. A vase was printed using AMTEx to examine its printing parameters, which matches the model geometry well. The printed vase has 8mm wide tubes and 4mm in height. However, a slightly irregular geometry was observed due to the dragging of the tube while printing, hence the need for improving the part cooling function. The vase product uses 60% less material compared to the same output using conventional methods.

The rapid cooling feature of AMTEx allows for freeform extrusion. The extruded tubes can support themselves mid-air with minimal sagging. To fully demonstrate this ability, a Universal Robots UR5 robotic arm with its increased Degrees of Freedom (DOF) and UR5’s teaching pendant can combine with the AMTEx to produce freeform projects.

A research paper describing the challenge, design, and outcome of the research