Solar cells made of perovskite are cheap, easy to produce, and almost as efficient as silicon, the material traditionally used in solar cells. However, perovskite cells have a love-hate-relationship with the Sun. The light that they need to generate electricity also happens to impair the quality of the cells, thus severely limiting their efficiency and stability over time. Researchers at Eindhoven University of Technology have now developed a theory that explains why compound perovskite cells are unstable in sunlight. The study was published in Nature Communications.

Perovskite is an attractive alternative to silicon for solar cells because it’s abundant and easy to produce. What’s more, over the past decade, the performance of perovskite solar cells has improved dramatically, with efficiency rates reaching more than 25 percent, close to the state-of-art for silicon solar cells.

This combination works particularly well because it allows for the ‘tuning’ of the band gap, or the minimum amount of photon energy needed to generate electricity in the material. This is especially helpful in so-called tandem solar cells where perovskite is combined with silicon and which require perfect ‘tuning’ of the various band gaps to ensure optimal performance.

Solving The Mystery of Segregation

However, there is a snag. While sunlight provides the perovskite cells with the photon energy they need to produce electricity, it also impairs their stability. Over time, this affects their performance. While this love-hate relationship between perovskites and the sun is well-known in the field, it is barely understood.

“To see what is going on, you need to look at what is taking place at the atomic level when light enters a solar cell”, says Peter Bobbert, professor at the department of Applied Physics and co-author of the article. “The photocarriers (electrons and holes), which are created by the incoming photons, tend to gather at places where the band gap is lowest, in this case the iodide-rich regions that spontaneously arise in the compound.”

Provided there is enough light, this triggers a chain reaction in which more and more iodide accumulates in the iodide-rich regions, and more and more bromide is driven out. The subsequent segregation of the compound tends to trap the electricity-producing photocarriers in these low-band gap areas, severely hampering the efficiency of the cell. 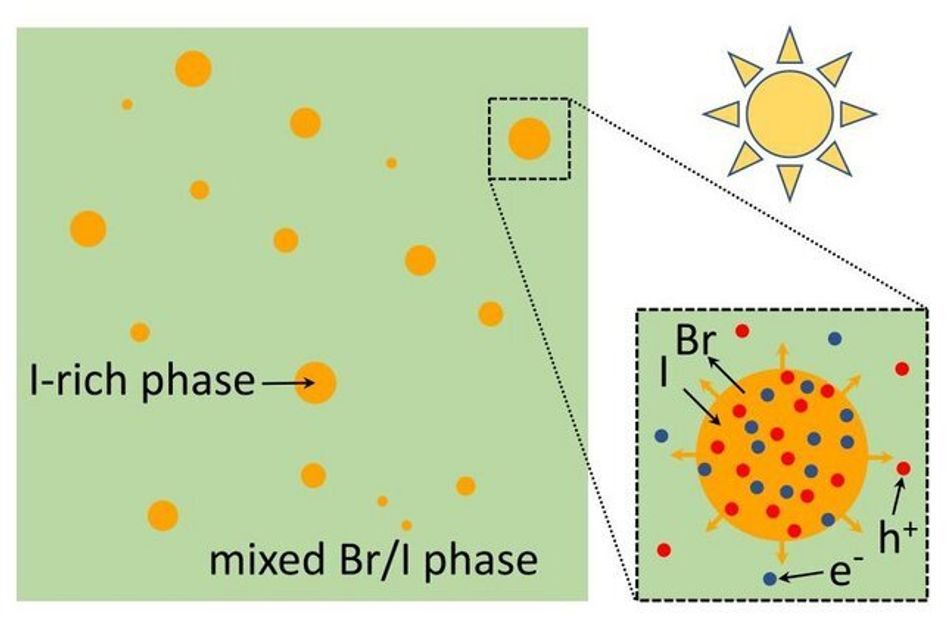 Under the influence of sunlight, the halides bromide and iodide segregate.

The researchers - who work together in the Center for Computational Energy Research and besides Peter Bobbert include Zehua Chen, Geert Brocks and Shuxia Tao - have developed a theoretical model that can explain why this is happening. “Our unified theory for light-induced halide segregation looks at the total free energy of the perovskite in the photovoltaic cells, both in the dark and when the cell is exposed to sunlight,” explains Bobbert.

“Excited photocarriers tend to move to areas where their free energy is lowest, in this case the areas with the lowest band gap. By analyzing this process, we were able to distinguish between stable, metastable, and unstable regions for each compound, depending on the temperature, the light conditions, and the bromide concentration”.

The beautiful thing about the theory is that it reveals a viable path towards possible solutions for the problem of compound segregation. The most obvious solution is limiting the light that falls on the cell, but that would adversely affect efficiency. A more promising way is to change the amount of bromide in the compound.

“Based on our calculations, you can predict exactly how much bromide you can add to the compound to increase its band gap without making the compound unstable,” says Bobbert. “By not mixing in an excessive amount of bromide, you can avoid segregation, while at the same time still achieving a reasonably large band gap that works for tandem cells.”

The paper gives the example of a cesium-lead compound cell that is stable up to 42 per cent bromide concentration (under normal temperature and sunlight conditions). This should guarantee a maximum band gap of 1.94 eV, more than sufficient for the top layer in an efficient tandem solar cell.

According to the researchers, the theory is highly flexible, which makes it applicable to other semiconductor materials where the band gap is tuned through alloying with additional materials and to cases that have not yet been considered, such as changes in the band gap due to strain.

The researchers also want to look at two-dimensional photovoltaic cells, in cooperation with the Molecular Materials and Nanosystems research group of René Jansen, which is also based at TU/e.