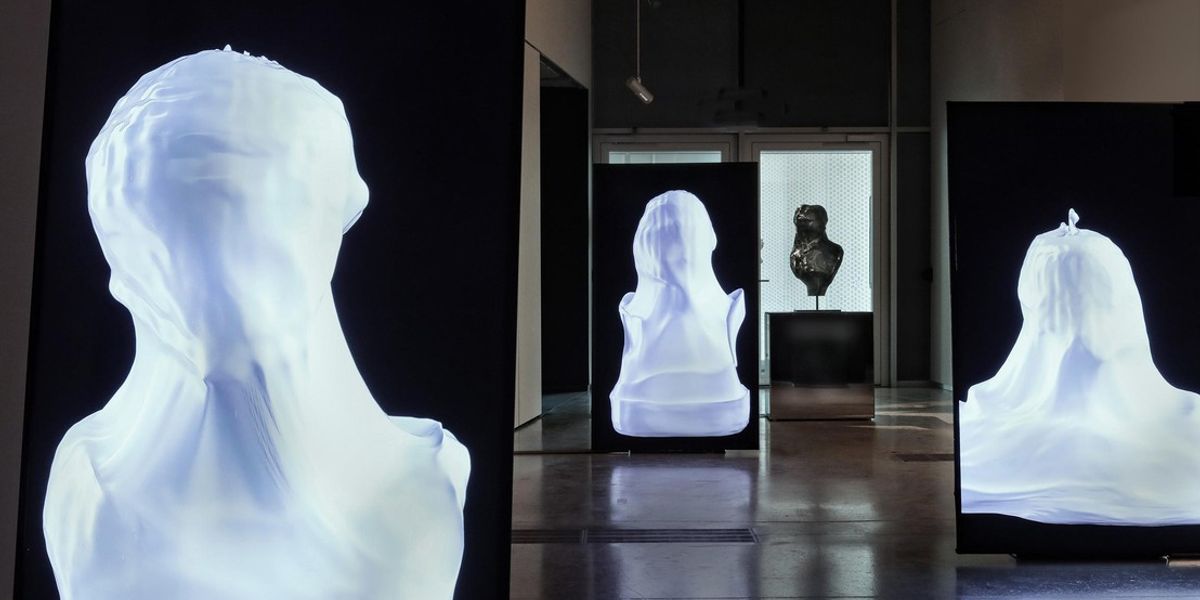 Helin is a sculpture in Carrara marble produced from 3D scans of 120,000 historical busts from all eras. © Alain Herzog/EPFL

Starting September 17, 2021, EPFL Pavilions will host an exceptional exhibition, "Deep Fakes: Art and Its Double". Organised by EPFL and University of Lausanne, using AI and the latest scientific imaging technologies, it immerses the public in the depths of artistic and cultural doubles.

A portrait of Rembrandt that is not quite the same nor quite another, a real Picasso that belongs to a community of 25,000 Internet users, an interactive 3D walk on the roof of Notre-Dame de Paris drawn from Assassin's Creed, a virtual golden calf on its pedestal or my identity impersonated by a hologram controlled by an artificial intelligence The exhibition Deep Fakes: Art and Its Double literally immerses us in the transcendent universe of ‘cultural deep fakes’, apparent copies, assumed doubles or inspired creations, made possible by cutting-edge technologies in imaging, virtual, augmented or mixed reality, and artificial intelligence. Opening on September 17, 2021, the exhibition will continue until February 6, 2022 at EPFL Pavilions, on the Lausanne campus of EPFL.

Exhibition curator and EPFL Pavilions director, Sarah Kenderdine, says: ‘The exhibition is the culmination of several years’ observation of new creative practices emerging from the world of computer science. It was only very recently that artists and producers began to fully grasp the potential of computational production and new forms of art.’ Throughout human history, art objects have always been copied. Worldwide, across sacred sites, museums, or in ordinary households, replicas enable art treasures to circulate and thus amplify the social, cultural, spiritual or commercial value of an original object. Now more than ever, copies of art appear to threaten the status of their originating counterparts. Yet, just as in the mid-19th century, replication today provokes fundamental and fascinating questions for human civilisation. 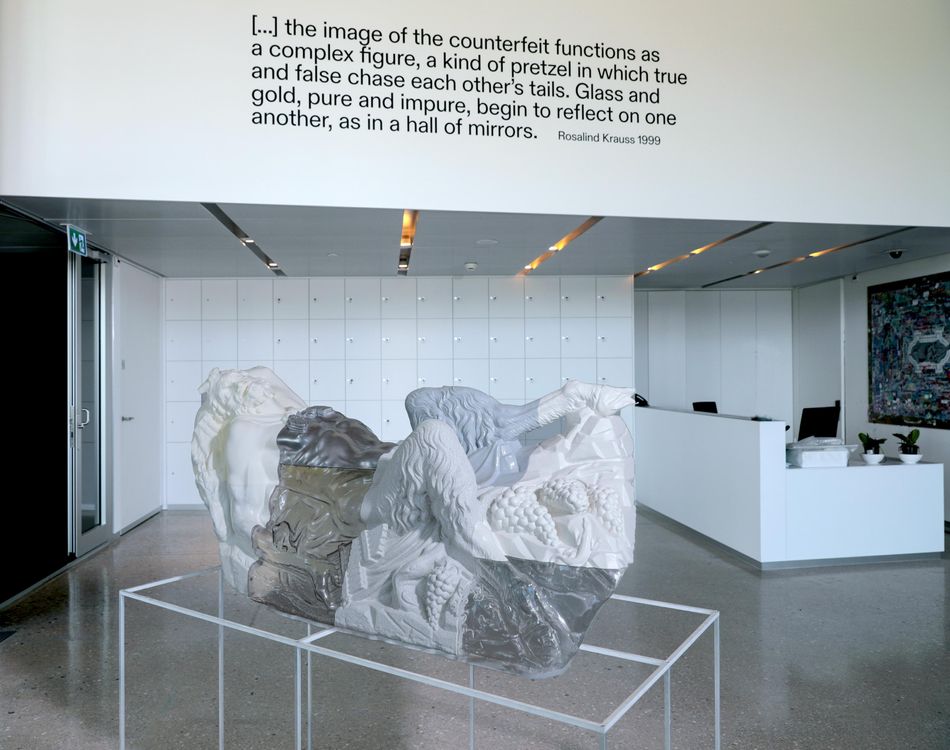 As soon as you enter Pavilion B, a facsimile of the Convention for promoting universally reproductions of works of art for the benefit of museums of all countries, drawn up in 1867, sets the tone. It is not a question of manipulation or disinformation, nor of fake or real, but rather of simulacra, reconstitutions, imitations, mirrorworlds that question – both through their techniques of conception and their renderings - the materiality, the authenticity, the circulation or ownership of art, as well as their heritage and culture.

It was only very recently that artists and producers began to fully grasp the potential of computational production and new forms of art.

First of all we have materiality. Science and its technological developments, many of which originate from the EPFL’s laboratories, bring us into a tactile relationship with the texture, patina, form and 3D structure of the originals. We enter – virtually – into a portrait of Henry VIII, painted by an anonymous artist between 1535 and 1540, through a touchscreen with an ultra-high resolution of 1200 dpi. We then detect an azure brushstroke in his right eye. In the third part of this triptych, a high-resolution X-ray fluorescence (XRF) scan of the work reveals the chemical composition of the pigments used and the heavy metals it contains. Copper-based blue pigment, is present in this millimetre of blue, the same copper pigment that is found in other multiple representations of the King of England in major museums!

But there is immateriality too. Digital facsimiles and virtual reconstructions take us back to events or worlds that have disappeared or been destroyed. On September 9, the statue of Confederate General Robert E. Lee fell from its pedestal in downtown Richmond, Virginia. Speaking Back, Terry Kilby's interactive installation based on two 3D models of the statue, is a unique testament to the fervour of the Black Lives Matter protesters and how they transformed a symbol of hate into a new strength. 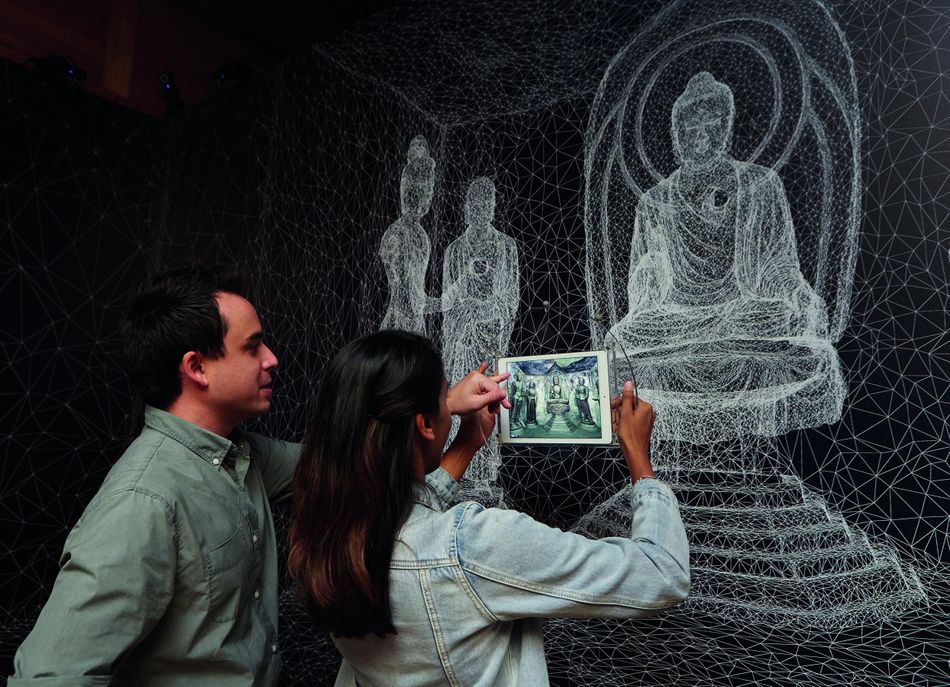 Clouds of the ancient world explores through drone 3D point clouds eight founding sites of ancient civilizations or cultures. The Bamiyan Valley, Aleppo, Giza, Meroe or Palmyra are today damaged or threatened by recent conflicts, but their digitization makes them eternal. Thanks to a collaboration with the University of Lausanne, Recreated Reality, in Pavilion A, presents in an extensive way the digitized archives of Paul Collart who, in the 1950s, immortalized the first Swiss excavation of the ancient sanctuary of Baalshamin in Palmyra. These exceptional documents have allowed an exhaustive 3D reconstruction of the site, resurrecting the temple destroyed with explosives by the Islamic State in 2015.

The exhibition thus takes us through time, space and cultures. With controlled technologies, but also by liberating technology. Helin, for example, by artist Christian Mio Loclair, is a sculpture in Carrara marble produced from 3D scans of 120,000 busts from all eras. The scans were used to train a machine learning algorithm that produces a natural and tangible artefact, a work without an author delivered to the public. Also exceptional is the presence of The Next Rembrandt, one of the most famous ‘cultural deep fakes’ to date. Generated entirely from data drawn from the paintings of the Dutch master, this stunning 3D print uses technology and data just as Rembrandt used his brushes and colours to create something new.

Finally, these technological feats would remain arbitrary if Deep Fakes: Art and Its Double did not also touch our feelings and emotions. It is impossible to describe the 21 installations presented, as each one is lived, explored and experienced in a personal and physical way. To view the virtual golden calf, you have to turn around it in an obligatory dance of veneration. To see the figures in the ‘Caves of the thousand Buddhas’, number 220, one must scrutinise the faded paintings in this dark, room. It is almost with giddiness that one walks on the buttresses of Notre-Dame de Paris with 3D glasses. But the most disturbing is certainly the face of TRUTHAI which, by an insidious and perverse game, steals our image...

Music meets AI: Could listening to Bieber be good for you?

Music meets AI: Could listening to Bieber be good for you?

An unexpected reaction to a Justin Bieber song has led to new research from The Australian National University (ANU) which could radically change the way we listen to music.

But a Stanford professor says the cat-and-mouse game is far from over.