Unmanned aerial vehicles, also known as drones, are being increasingly used for commercial, scientific, agricultural, and infrastructural uses. With this technology, scientists and engineers are now better-equipped to solve problems and alleviate issues in these fields.

Kenji Shimada, professor of mechanical engineering, and his team of engineers are using autonomous technology to detect damage to agricultural water canals in a town in Niigata, an agricultural district on the northwest coast of Japan. These canals are essential for the rice farming economy in the region and total approximately 40,000 kilometers throughout Japan.

Damage to the canals accumulates annually due to age, earthquakes, and extreme weather. They can only be analyzed and repaired during the two-month dry season each year. Of these two months, one and a half of them are currently devoted to laborious inspection by technicians who walk along the canals to manually identify, measure, and record damaged areas. This leaves only half a month for repairs.

“40,000 kilometers are equivalent to the equatorial circumference of Earth, and the manual labor for inspecting and evaluating the condition of water canals is enormous.  We automate the work by flying autonomous drones equipped with high-resolution cameras and detecting cracks and wear with machine-learning algorithms,” said Shimada.

Shimada and his team have developed a systematic framework with a fleet of drones and coordinating cars to assess the canals effectively and efficiently, extending the coverage area and minimizing inspection time. Di Deng, a Ph.D. candidate in mechanical engineering, works on the coverage planning aspect of the project. Last year, she traveled to Japan to conduct field tests of the drone in different types of water canals.

“Over the summer, we flew our autonomous drone in Japan and tried different sizes of water canals, so the system can automatically decide the position of the drone inside the water canals,” said Deng. “We tried out the widths of the water canals that go from 5 meters to 2.4 meters. We could clearly see a lot of stone exposed, so these were the places we needed to repair.”

Using public maps and research data, the research team has formulated an algorithm to plan the drones’ path along the canals. They can fly along canals of different sizes in multiple directions to record complete video of the walls for crack detection. The type of commercial drone chosen for the project is limited to thirty minutes in the air and must stay within a range of a few kilometers from the remote controllers. This makes it impossible for the drones to cover all of the canal in one flight. To ameliorate these limitations, they are paired with cars parked within the maximum distance away that provide batteries and coordinate to pick the vehicles up when needed. Once they have recorded video of the entire canal, the data from the images is fed into a neural network to detect damaged areas and map them in CAD models. To plan the paths of the drones, a scaled map of a canal is converted to a graph. This graph is then divided into subgraphs, which represent the areas they will cover. The team also graphs the roads to generate a route for the car that is within communication distance of the drones. The cars are programmed to automatically find alternative routes if faced with traffic. 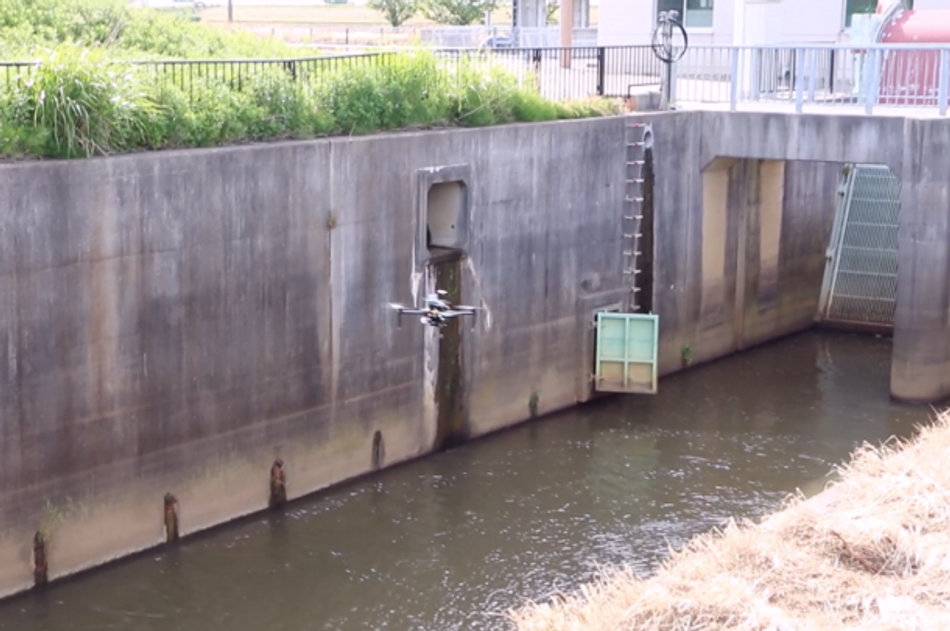 The team presented their research at the International Conference on Intelligent Robots and Systems (IROS) in October. In the future, they plan to tackle potential road blocks. In addition to the battery and time limitations, logical challenges to this project include potential vehicle collisions, aerial constraints (i.e.: flying zones, aerial traffic, and other regulations), and inaccurate maps and measurements. Another long-term goal is to develop large-scale automated vehicle planning.

“We believe that this type of technology is critical to keeping the aging infrastructures healthy and safe—it enables faster, cheaper, and more regular inspection and monitoring,” said Shimada.