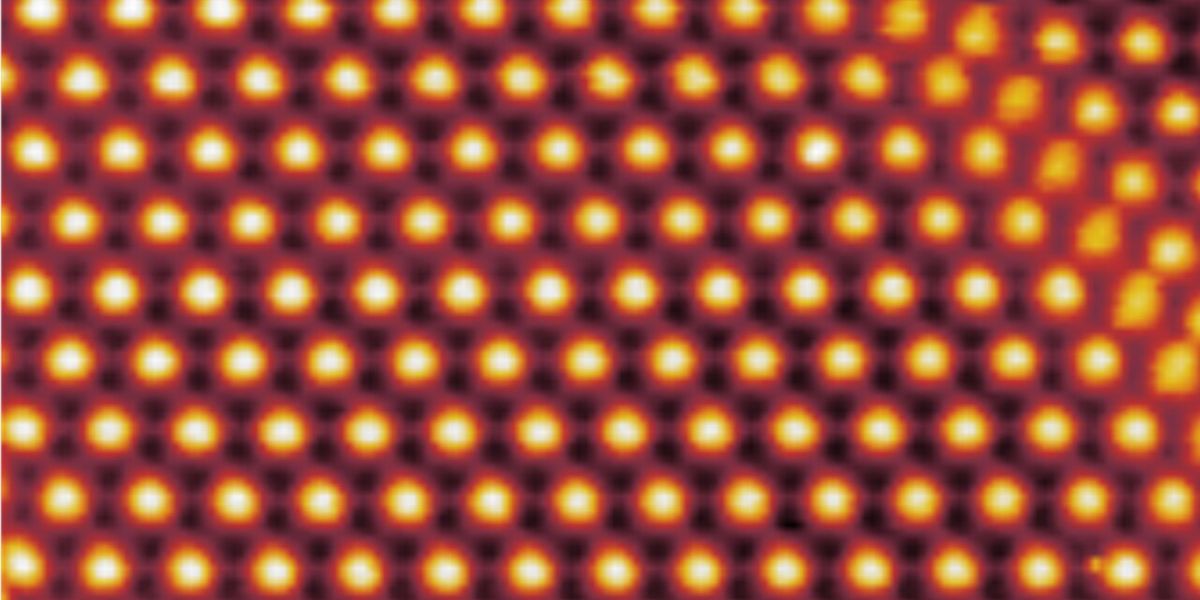 Image: The surface of a trilayer of graphene, as imaged by a scanning tunneling microscope. Due to the twist of a second layer, trilayer height is modulated with a period of about 9 nanometers.

The ability to turn superconductivity off and on with a literal flip of a switch in so-called "magic-angle twisted graphene" has allowed engineers at Caltech to observe an unusual phenomenon that may shed new light on superconductivity in general.

The research, led by Stevan Nadj-Perge, assistant professor of applied physics and materials science, was published in the journal Nature on June 15.

Magic-angle twisted graphene, first discovered in 2018, is made from two or three sheets of graphene (a form of carbon consisting of a single layer of atoms in a honeycomb-like lattice pattern) layered atop one another, with each sheet twisted at precisely 1.05 degrees in relation to the one below it. The resulting bilayer or trilayer has unusual electronic properties: for example, it can be made into an insulator or a superconductor depending on how many electrons are added.

Superconductors are materials that exhibit a peculiar electronic state in which electrons can flow freely through the materials without resistance—meaning that electricity flows through them without any loss of energy to heat. Such hyper-efficient transmission of electricity has endless potential applications in the fields of computing, electronics, and elsewhere.

However, the catch with superconducting is that in most materials, it takes place at extremely low temperatures, usually only a few degrees above absolute zero (−273.15 degrees Celsius). At such temperatures, electrons forms pairs that behave in a fundamentally different way compared to individual electrons and condense into a quantum mechanical state that allows for electron pairs to flow without being scattered.

Superconductivity was first discovered more than a century ago, yet scientists still do not fully understand the precise mechanisms behind electron-pair formation for some materials. In conventional superconductors, such as metal aluminum, it is well understood that the attraction between electrons that leads to the formation of electron pairs is due to the interaction of the electrons with the material's crystal lattice. The behavior of these materials is described using the Bardeen–Cooper–Schrieffer (BCS) theory, named after John Bardeen, Leon Cooper, and John Robert Schrieffer, who shared the Nobel Prize in Physics in 1972 for the theory's development.

While studying magic-angle twisted trilayers of graphene, Nadj-Perge and his colleagues discovered that superconductivity in this material exhibits several very unusual properties that cannot be described using BSC theory, making it likely also an unconventional superconductor.

"While superconductors have been around for a long time, a remarkably new feature in twisted graphene bilayers and trilayers is that superconductivity in these materials can be turned on simply through the application of a voltage on a nearby electrode," says Nadj-Perge, corresponding author of the Nature paper. "An electric field effectively adds or removes extra electrons. It works in a very similar way as the current is controlled in conventional transistors, and this allowed us to explore superconductivity in ways that one cannot do in other materials."

The team established that in twisted trilayers, two superconductivity regimes with differently shaped superconducting gap profiles are present. While one of the regimes can perhaps be explained with a theory that is to some extent similar to BCS, the presence of two regimes shows that within the superconducting phase an additional transition is likely to take place. This observation, alongside measurements taken at various temperatures and magnetic fields, points to the unconventional nature of superconductivity in the trilayers.

The new insights by Nadj-Perge's team give essential clues for the future theories of superconductivity in twisted graphene multilayers. Nadj-Perge notes that it appears that more layers make superconductivity more robust while remaining highly tunable, a property that opens up various possibilities to use twisted trilayers for superconducting devices that may someday be used in quantum science and perhaps quantum information processing.

"Besides its fundamental implications to our understanding of superconductivity, it is remarkable that adding an extra graphene layer made studying superconducting properties easier. Ultimately this is what enabled our findings," Nadj-Perge says.

What is Magnetism? Examples of Magnetic Substances

After analysing the global plastics value chain, ETH researchers have revealed that the impact of plastics on climate and health is bigger than originally thought due to the increased use of coal for process heat, electricity and as a raw material in production.

What is Magnetism? Examples of Magnetic Substances

Magnetism is a force exerted by charged particles in motion that allows them to attract/repel other moving charged particles. The universal phenomenon is responsible for shaping the world as we know it.

Researchers at ETH Zurich and Empa have chemically modified wood and made it more compressible, turning it into a mini-​generator. When compressed, it generates an electrical voltage. Such wood could serve as a biosensor or as a building material that harvests energy.