Researchers unlock hidden potential in a long-studied group of materials

When it comes to porous metamaterials —ubiquitous, sponge-like materials used in everything from sound absorption to self-cleaning glass — it’s all about how you slice it.

In a new paper from the Harvard John A. Paulson School of Engineering and Applied Sciences (SEAS) and the Harvard Graduate School of Design (GSD), researchers found that slicing a block of elastomer with a periodic array of holes at a 45-degree angle, instead of the typical 90-degree straight cut, changed the behavior of the material, giving it new properties and opening a range of new applications for this long-studied group of materials.

“Porous metamaterials have been studied in great depth and have been well understood for many, many years, but we have shown that there are still surprising new avenues to explore,” said Katia Bertoldi, the William and Ami Kuan Danoff Professor of Applied Mechanics at SEAS and senior author of the study.

The research is published in Extreme Mechanics Letters. 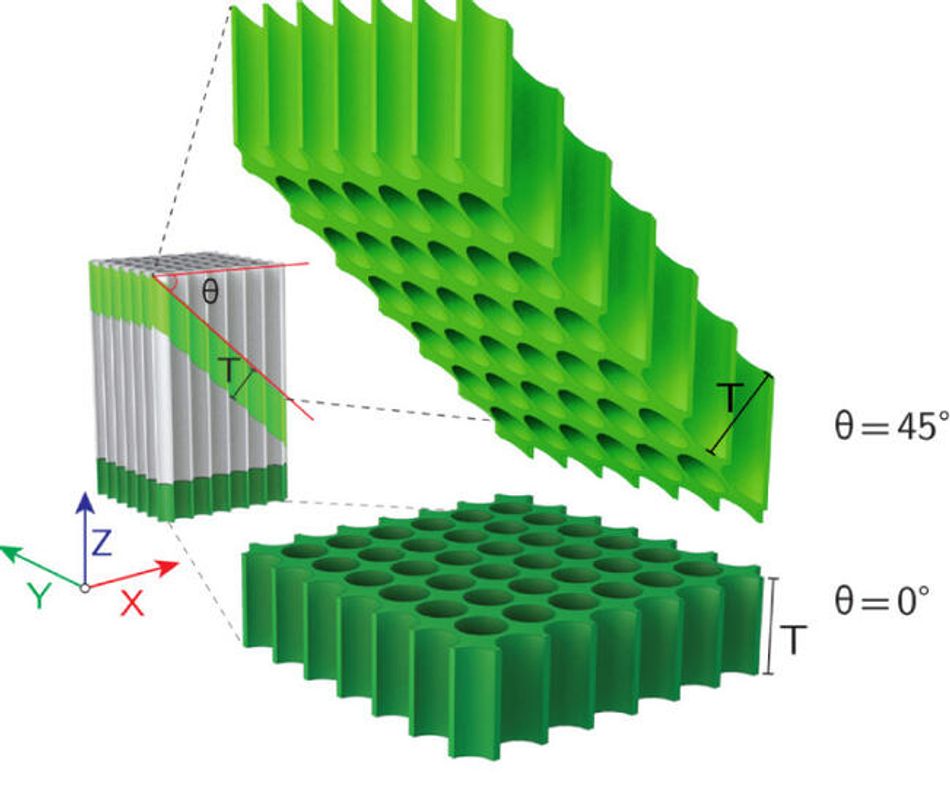 This structure is made by slicing a block (shown in gray), containing a square array of cylindrical holes, at an angle.

Previous studies, including those performed in the Bertoldi Lab, demonstrated that when porous metamaterials with a square array of holes or channels are compressed, the beam-like ligaments separating the pores buckle and lead to a sudden transformation of the circular holes into ellipses. This reversible morphological change has been harnessed to build structures with unusual mechanical properties that can be used as photonic and phononic switches, color displays, and soft robots capable of grasping and walking.

Those transformations have historically been studied in-plane, meaning the surface of the material remained flat during the entire actuation process.

But by simply cutting this periodic geometry at an angle, the Harvard researchers figured out how to enable out-of-plane, or three-dimensional transformations, in the material. After cutting the material at a 45-degree angle, the team covered both sides of the material with a thin elastic film and attached an air pump. When all the air is evacuated from the material, the ligaments separating the pores buckle outward, causing ridges to appear on the surface of the material. When air is pumped back in, the ridges disappear as the surface returns to flat.

“These types of geometric transformations haven’t been previously explored in this class of materials because no one has thought of cutting them in this way,” said Matheus C. Fernandes, a former graduate student at SEAS and the Harvard Graduate School of Arts and Sciences and co-first author of the paper.

This change in surface morphology can be harnessed to alter the friction between the material and an underlying surface. To demonstrate this effect, in one experiment, the team attached small acrylic spheres to the surface of the porous block. At normal air pressure, the spheres remained in contact with the underlying surface, acting as wheels as the block slid down a ramp. When the air was evacuated, the spheres were pulled into the material as the higher friction ridges buckled out, and the block stayed put. The researchers also demonstrated the opposite scheme, attaching skate-like fins that increased friction when the block was fully inflated and allowed the block to skate down the surface when the air was evacuated.

Using these two set-ups, the researchers built a worm-like robot that inched forward by changing the friction between each segment of its body and the ground.

In another experiment, the team covered the block with a reflective paint and demonstrated that light scattering from the block’s surface could be altered when the surface changed topology.

“This change in the third dimension opens up a lot of possibilities for different applications,” said Saurabh Mhatre, a senior research associate at GSD and co-first author of the paper. “It can change the way light is reflected, the way fluid flows, and the way sound is absorbed and reflected. It could even be used on the soles of sneakers to change the levels of traction during walking or running.”

"This material is intrinsically multifunctional, making it even more applicable to real-world devices and applications, since you don’t need to add additional components to the system to achieve these different behaviors, significantly simplifying the design and manufacturing process,” said James Weaver, a Senior Scientist at SEAS and co-author of the paper.

“This project is yet another success story in the almost decades-long collaboration between researchers at SEAS and at the GSD,” said Martin Bechthold, Kumagai Professor of Architectural Technology at the GSD, co-director of the Master in Design Engineering Program at Harvard and co-author of the study. “We will continue to break through the traditional barriers between science and design in the pursuit of innovative solutions that only arise through out-of-the-box thinking and the ability to imagine and build in a rapid and iterative cycle.”

The paper was co-authored by Antonio E. Forte, Bing Zhao and Olga Mesa.

Light-controlled polymers can switch between sturdy and soft

Soft robots for all

Light-controlled polymers can switch between sturdy and soft

New material reversibly changes its structure in response to different wavelengths of light.

Soft robots for all